Elimimian ready for the ‘new chapter’ in Saskatchewan

Elimimian ready for the ‘new chapter’ in Saskatchewan

REGINA — There’s always a moment when a CFL player heads to a new team that makes you do a double take.

That exact feeling happened when Solomon Elimimian, who for nine seasons rocked the orange and black, put on a Saskatchewan Roughriders hat at his introductory press conference on Thursday afternoon.

“The green is different,” he laughed, wearing a full black suit to go along with the Rider colours on his lid. “The green is different but you know what? It’s a new chapter in my life. I’m excited. Fans in BC know that I appreciate them for all of the love that they’ve showed throughout the time. It was a special time that I had in my career and this is a new chapter.”

The All-Star linebacker was cut from the Lions last week, ending his nine-year long tenure in Vancouver. He said he talked to “different teams” after his release and had a conversation with his former teammate Manny Arceneaux (who signed with the Riders as a free agent this off-season) before making his decision to put pen to paper with Saskatchewan. 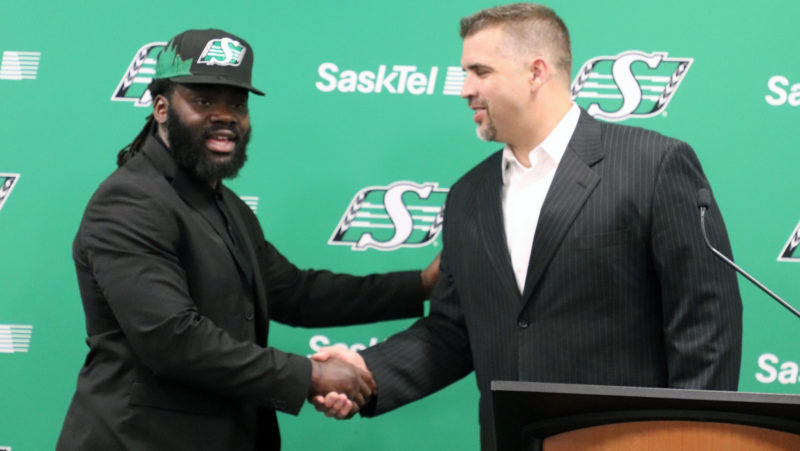 It was also the excitement that comes along with playing in Riderville that intrigued the 32-year-old.

“I think as a player, every player that plays here (in the CFL), they have in the back of their mind, ‘what would it be like to play for Saskatchewan?'” said Elimimian. “With the fan base and the crowd. I was telling Jeremy (O’Day) about the jets going over head. The atmosphere is something different than any place you’ve ever been.

Elimimian joins a defence littered with All-Stars and playmakers that have earned a reputation around the league. Free agent signing Micah Johnson and Charleston Hughes will line up in the trenches and add in Elimimian at the next level behind them, the Roughriders front seven will be a headache for any offence lining up against them.

“It’s physical,” said Elimimian when asked about Saskatchewan’s defence. “They fly around and they make plays. I’ve always had a lot of respect for Charleston (Hughes) on and off the field. I know a lot of the guys, Ed Gainey, Zack (Evans). There’s players there on that defence. And you add a guy like Micah (Johnson), that’s a guy that people don’t want to deal with. They don’t want to deal with big Micah. He’s a phenomenal player. He has a mentality and I just want to add to that. I want to bring what I bring and I want to add to that and really make it a special year.”

The six-foot, 225-pound middle linebacker missed all but four games in 2018 with a wrist injury. Before the injury, Elimimian was producing at the highest level of his career. He tallied 144 defensive tackles in 2017, a career-high for the two-time Most Outstanding Defensive Player.

Now with a new team, in a new city, Elimimian is leaving the Leos behind and is excited to start the new chapter of his career.

“I’m going into my tenth year and I feel like I’m in my first year with the doubts and all of that stuff,” admitted Elimimian. “So that’s a good motivator. It just comes with it. I’ve always had a chip on my shoulder, I don’t think that will ever leave no matter how many accolades or things that I do. That’s who I am and that’s who I’ll continue to be. I’m really excited for this opportunity.”