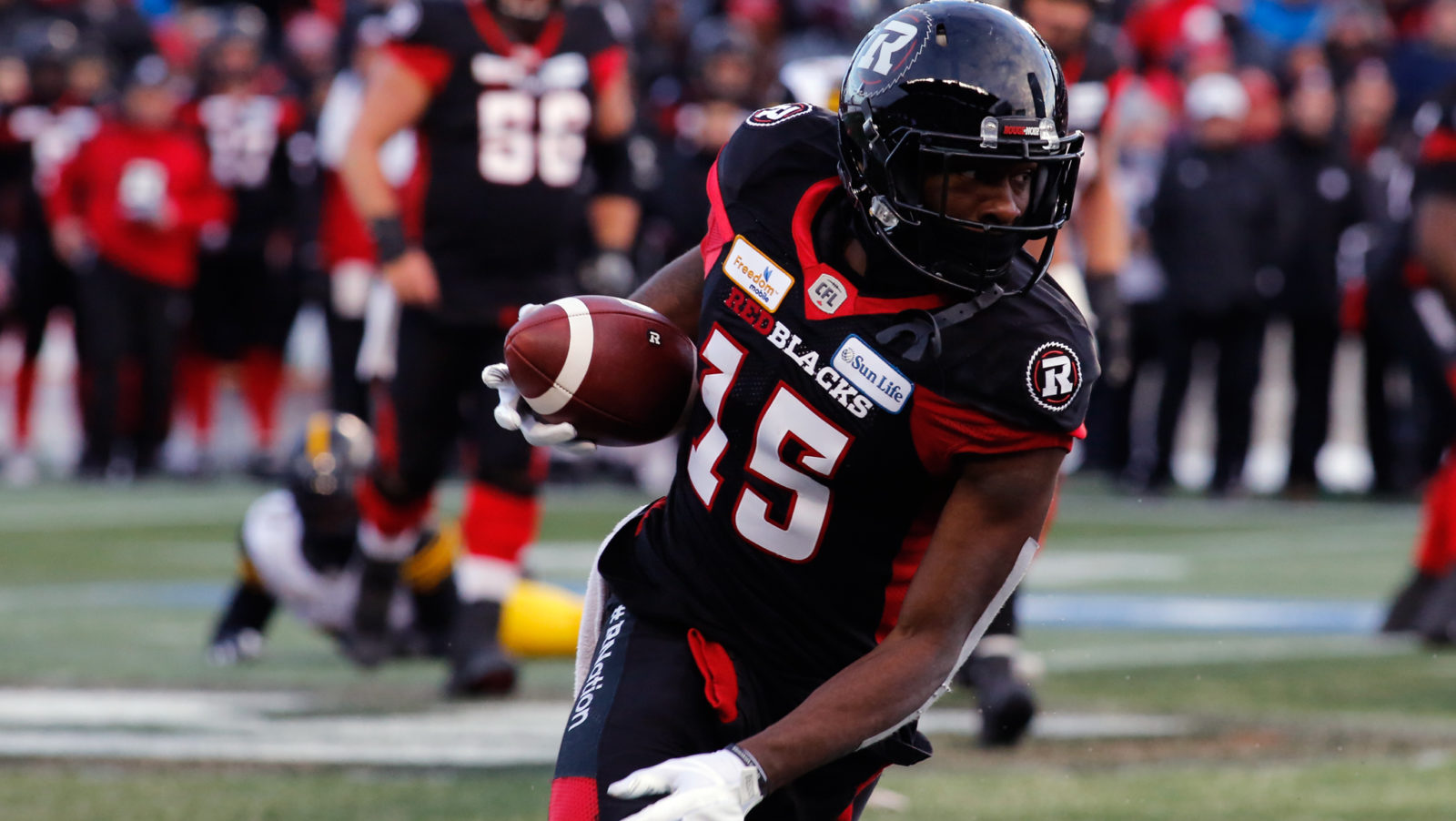 OTTAWA — These aren’t the Ottawa REDBLACKS we’re used to.

It’s been a challenging off-season for General Manager Marcel Desjardins, who’s seen some of his top offensive stars depart through free agency.

To make matters worse, Jaime Elizondo, considered a rising star offensive coordinator in the CFL, left two months before training camp, leaving an offence in search of an identity.

Breathe, REDBLACKS fans. You’ve been here before, even if not to this extreme.

Desjardins, the veteran general manager who took over an expansion club in 2014 that has since won a Grey Cup and made three appearances in the league’s championship game, has proven adept at unlocking cost-efficient talent. Rick Campbell, meanwhile, has led the team to East Division titles in three of the last four years.

With a veteran defence and an O-line brimming with Canadian talent, can Desjardins’ magic keep the REDBLACKS atop the CFL East Division?

Let’s start with a new-look offence: 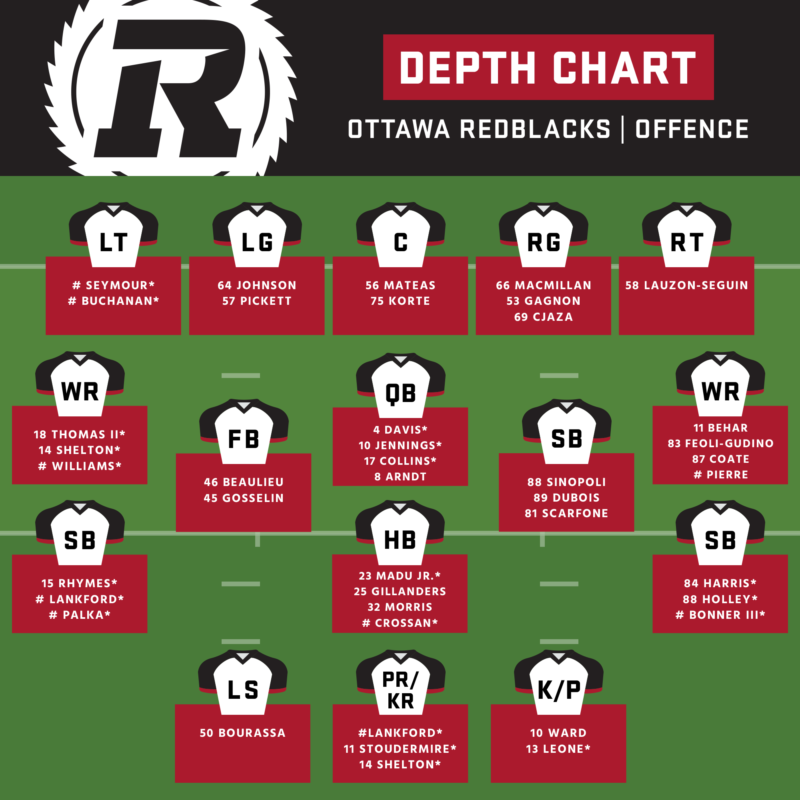 After some years of Henry Burris at quarterback followed by Trevor Harris, REDBLACKS fans have been spoiled with strong quarterback play since the franchise came into existence. Trevor Harris signed with Edmonton and for the first time, open competition will determine who leads Ottawa’s offence into the new season: Jonathon Jennings or Dominique Davis.

Fans are hoping Jennings can regain his 2016 form, when he was one of the CFL’s fastest rising stars while overtaking Travis Lulay in BC. But is the job his to lose? Not entirely, as Rick Campbell and co. like what they’ve seen from Davis, and will give the agile veteran every opportunity to be the No. 1 guy.

While the quarterback is key, the skill positions have taken a hit in the nation’s capital. Running back William Powell, the CFL’s second-leading rusher in 2018, signed with Saskatchewan in free agency. Mossis Madu looks like the early front-runner for the job but should be challenged in camp. Perhaps Desjardins considers another move here, like signing Alex Green from the Ticats.

The receiver position will also see significant change with Greg Ellingson joining Harris in Edmonton and Diontae Spencer testing NFL waters. The REDBLACKS will lean on their international scouting department more than ever as players like RJ Harris, Dominique Rhymes and Noel Thomas II look for bigger roles this season. Ryan Lankford, Caleb Holley and Canadian Nate Behar were added as reinforcements.

Up front, Ottawa’s collection of Canadian talent is the envy of the CFL. Jason Lauzon-Seguin is expected to play tackle this season, giving Ottawa four Canadian starters on the O-line and some added ratio flexibility, while there will be plenty of depth and competition on the inside. Yet the offensive line isn’t without its questions. The loss of SirVincent Rogers to Edmonton and reported retirement of Josue Matias opens a hole at left tackle that will likely be filled through competition in camp.

If the offence needs time to gel, the defence may have to pick up the slack in 2019. Let’s take a look at how things could stack up under second-year coordinator Noel Thorpe: 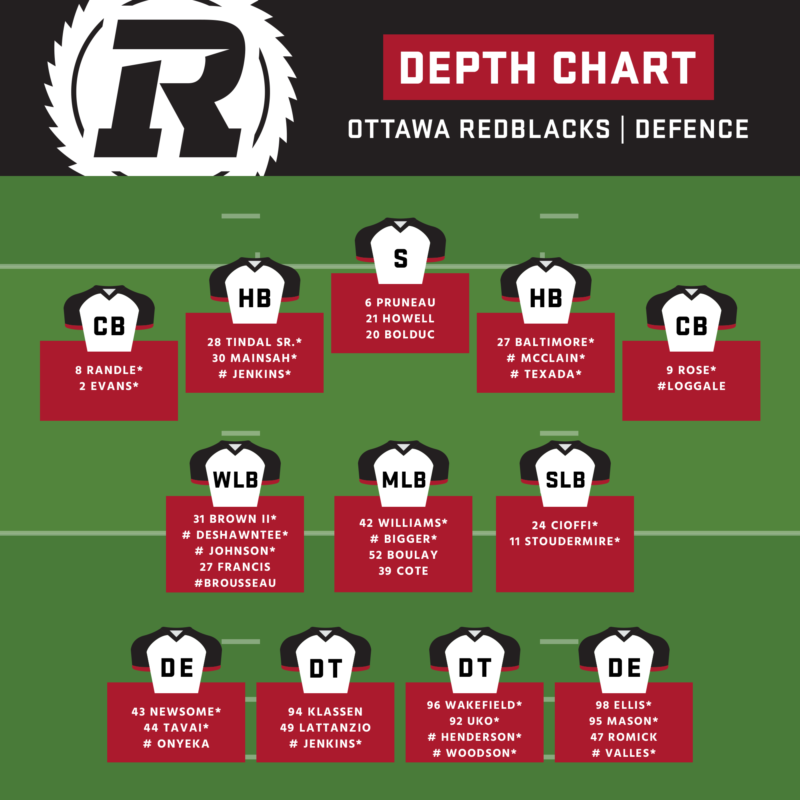 Regarded highly for his defensive wizardry, Thorpe demands versatility from his players — most of the REDBLACKS’ defensive backs can play multiple positions, so it’s hard to predict how the pieces will fit together. Wherever he lines up, eighth-year veteran Chris Randle is a nice addition to a secondary that made strides in 2018, holding opponents to just 7.9 yards per pass attempt.

While the secondary returns mostly intact, linebackers Kevin Brown, 25, and Avery Williams, 24, have earned the chance to start after breakout seasons in 2018. Brown had 55 tackles, two sacks and an interception in 15 starts, with Williams adding 43 tackles, two forced fumbles and a touchdown in 11 starts.

In bringing in Thorpe, Rick Campbell achieved his goal of creating more pressure and forcing more takeaways. Last season the REDBLACKS tallied 33 sacks and forced the third-most turnovers in the league with 41. Their turnover differential was plus-nine, a significant improvement compared to previous years.

With all the talk about changes this off-season, the defence will be the crutch for the REDBLACKS.