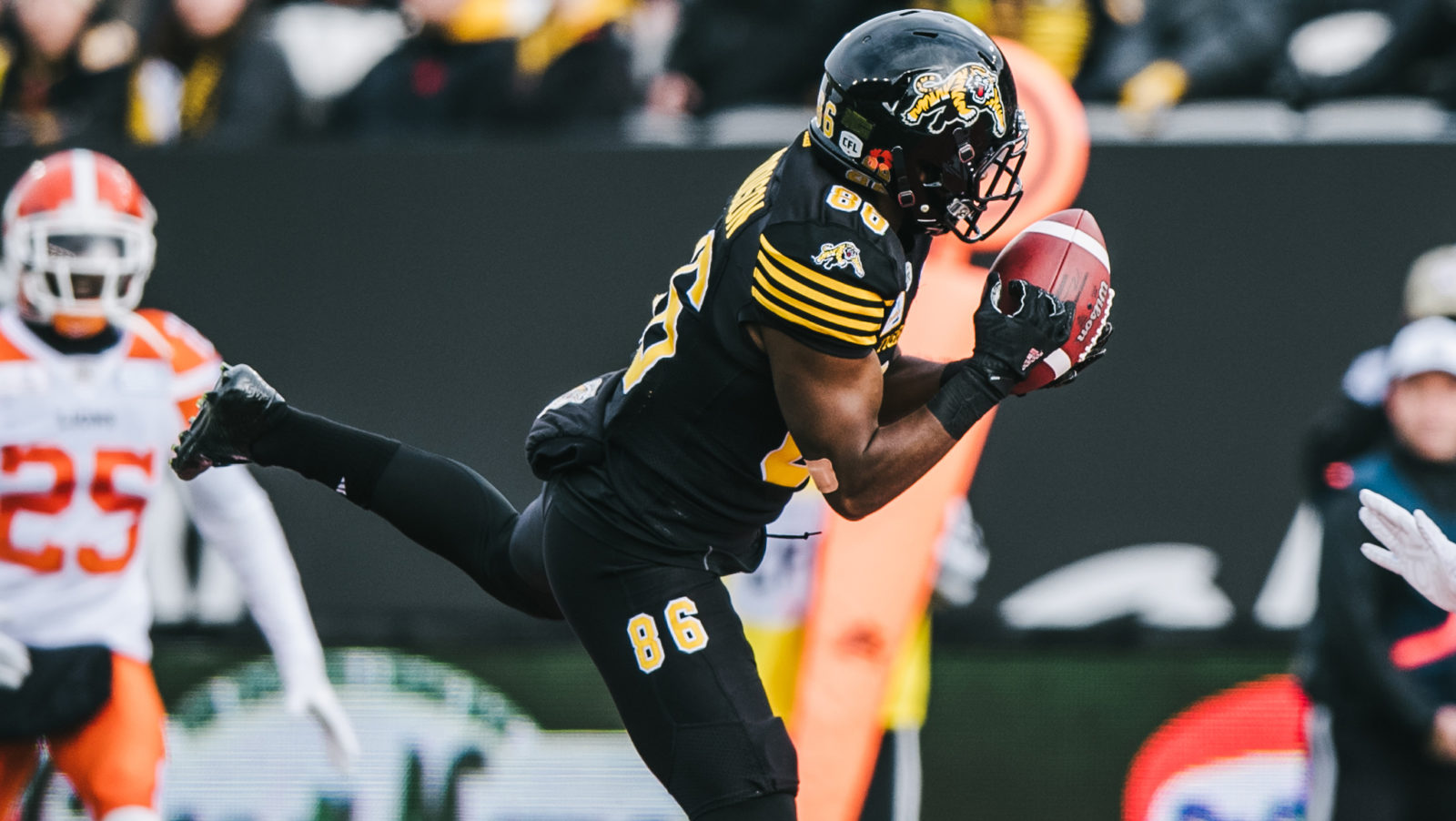 HAMILTON — On paper, the Tiger-Cats have the look of a team that should cruise to an East Division title and contend for the city’s first Grey Cup since 1999.

It’s been 20 years in the making, but Ticats fans have plenty of reasons to be in their seats every time Jeremiah Masoli takes to Tim Hortons Field. Masoli led the league’s most exciting offence last season, leading the CFL with 405.6 yards per game and an average of 9.1 yards per play through the air.

While there’s new leadership from within, with aspiring young coach Orlondo Steinauer taking over the reins for his first professional head coaching job, there’s no reason the Ticats can’t repeat their breakout season under veteran coach June Jones. Jones will continue to lead an offence that boasts an awe-inspiring array of weapons across the board.

If Steinauer, a renowned defensive specialist, can elicit the expected results alongside new coordinator Mark Washington, fans have plenty of reason to believe they’ll be watching their team try to win a championship on Nov. 24 in Calgary.

With that, let’s start with the Ticats’ offensive depth chart: 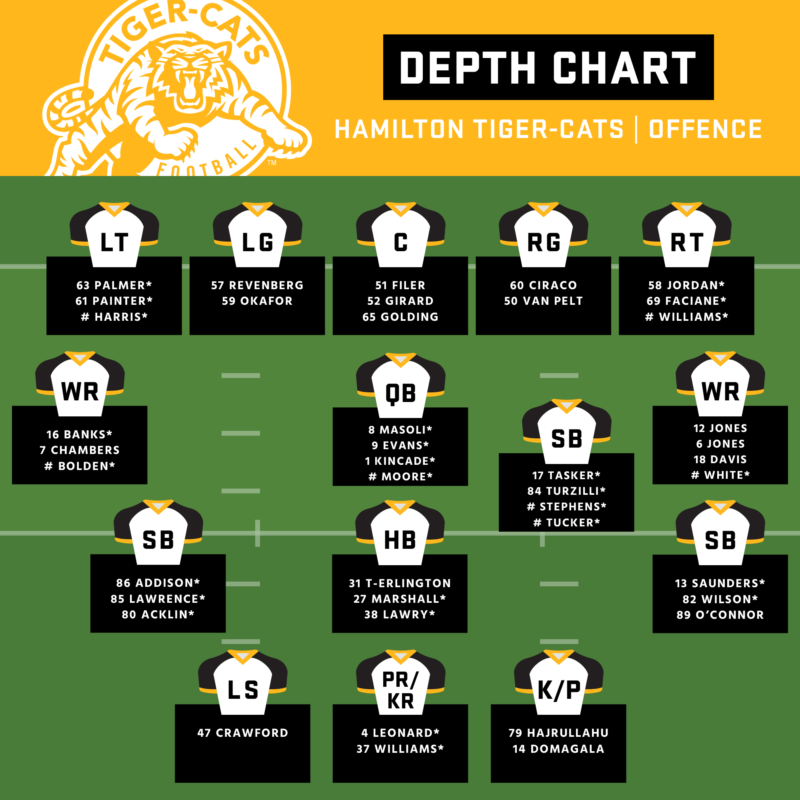 While recent second overall pick Jesse Gibbon isn’t shown above, the hometown product could be a fixture up front for the Ticats for years to come. Gibbon, Brandon Revenberg and sophomore Darius Ciraco are brimming with potential, giving the O-line plenty of room to grow in the coming years. The only question now will be at tackle, where internationals Avery Jordan and Kelvin Palmer are penciled in as starters following Ryker Mathews‘ departure to the NFL.

Just like with any good offence, the Ticats’ recent success wouldn’t be possible without a sturdy offensive line, but dynamic quarterback Jeremiah Masoli and his explosive group of receivers are what make June Jones’ offence so prolific. Masoli is as dangerous with his legs as anyone, leading the league with a 7.5-yard average on 63 rushing attempts. But don’t discount the arm, which saw him lead all starters — including Mike Reilly and Bo Levi Mitchell — with 9.1 yards per attempt.

The veteran trio of Jalen Saunders, Brandon Banks and Luke Tasker combine experience and skill, while Bralon Addison was equally impressive late in 2018 when injuries took their toll. The Ticats could have room for all four on the field if they decide to go Canadian at running back, a realistic possibility following the surprise release of Alex Green a week before camp.

While international running back Cameron Marshall is in the driver’s seat of the Ticats’ backfield, the emergence of Sean Thomas-Erlington provides ratio flexibility, with draft pick Maleek Irons offsetting the loss of Mercer Timmis to free agency. Suffice to say, with those four international receivers in the lineup, the Tabbies’ passing attack would be the most dangerous in the CFL on paper heading into 2019.

There’s no question the Ticats boast an impressive arsenal on offence, but what about the defensive side of the ball? Let’s flip the depth chart and take a look: 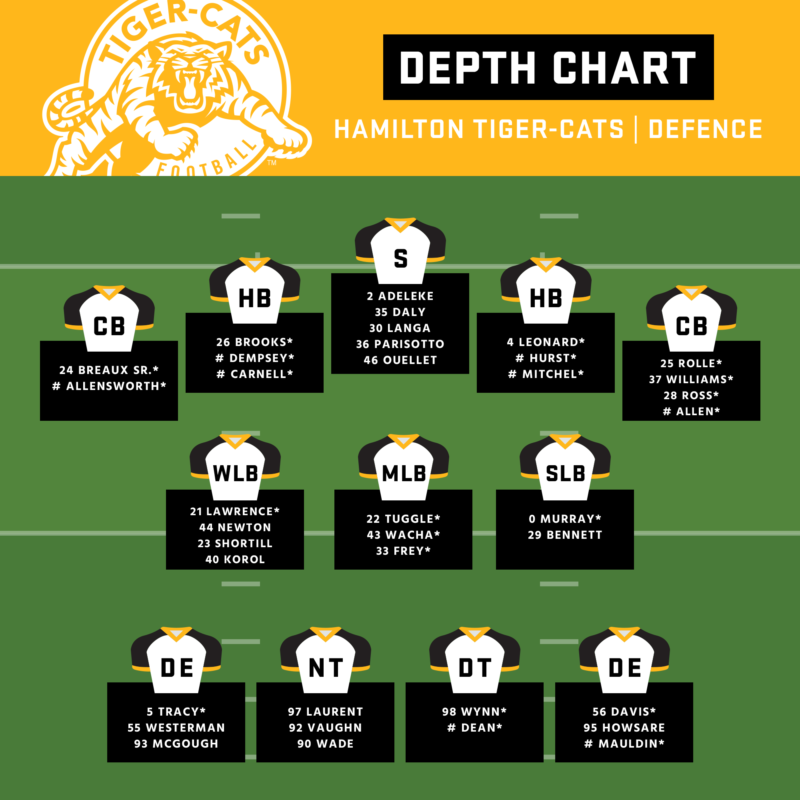 Despite boasting the CFL’s third-ranked defence and secondary in 2018, the Ticats didn’t have any answers in the Eastern Final, as Trevor Harris waltzed all over them with a playoff record six touchdown passes. With veteran coordinator Mark Washington brought in to oversee the defence, the outlook has changed over the last six months.

A lack of pressure was a big part of the problem, as the team finished second-last in the CFL in both sacks and takeaways. Dominant Canadian defensive tackle Ted Laurent doubled the next closest player with eight sacks, while Adrian Tracy and recently-released Justin Capicciotti totaled just five sacks in a combined 28 games.

The prognosis was clear, and the team responded with one of the biggest signings of the off-season, landing former Stamps defensive end Ja’Gared Davis. While the Ticats still could start a Canadian opposite him with Jamaal Westerman, Julian Howsare and Connor McGough all on the roster, there’s enough flexibility to start three Americans on the D-line. Either way, expect the front four to get to the quarterback more often in 2019.

Veteran linebacker Simoni Lawrence is back for a seventh season in Hamilton, but the Ticats have a new middle linebacker after Larry Dean signed with Edmonton. Justin Tuggle and Lucas Wacha are expected to compete for the position.

Cariel Brooks, Richard Leonard, Jumal Rolle and shutdown corner Delvin Breaux should occupy their usual spots in the secondary, but there’s some flexibility both at safety and SAM linebacker. Don Unamba left for free agency after a breakout season and while Canadians Tunde Adeleke and Jackson Bennett could be considered to fill the vacancy, Rico Murray has returned to Hamilton and is the most logical choice. Adeleke, a promising young defender who spent two seasons with the Stamps, has a chance to take over the starting safety role, previously occupied by Courtney Stephen and Mike Daly.

There’s a lot to work out in camp for the Ticats’ defence, but it’s a promising group that could take the team to new heights.