June Jones stood at the podium inside the media room at Tim Horton’s Field, his last duty as a member of the Hamilton Tiger-Cats and he digressed. He couldn’t help it.

“I was telling stories yesterday of finding two receivers, Gill Stegall and Troy Johnson when I was with (the Denver Gold in) the USFL,” he said.

This was going into the 1985 season. It was Jones’ third job as a football coach and three years after he’d played QB for the Toronto Argonauts. His story was still at the beginning. 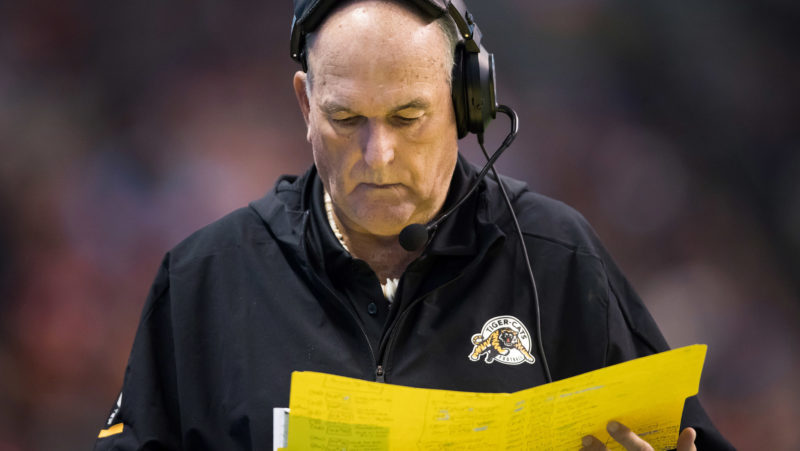 “One of them had caught four balls and one had caught eight balls in their college career,” he continued.

“I remember getting on a plane and going there, watching them work out and catch the ball and they ended up…one of them (Stegall) set a USFL record, (16) catches in a game. It still stands, I think. I worked him out at a grocery store.

“Troy Johnson played with the St. Louis Cardinals at the time for about six years and Gill went on to the Kansas City Chiefs. That stuff I like to do.”

Historically, the CFL is no stranger to parking lot tryouts, or unheralded college players opening eyes after paying their way into an open tryout on a hot and muggy field in Anytown, USA. This is the kind of stuff that Jones, now 66, can’t get enough of. And with Houston’s XFL team starting up in 2020, the chance to unearth some diamonds — in Texas, where he coached in the USFL, NFL and NCAA through his career — was too great to pass up.

So a year and a half after he arrived in Hamilton, assuming head coaching duties from Kent Austin’s 0-8 Ticats team in 2017 and after getting the Ticats to the Eastern Final in 2018, Jones is moving on to a new head coaching role.

Over the winter he’d stepped back to be associate head coach and offensive coordinator, but Monday’s news of his departure comes as the shortest of notice, with rookie camps opening on May 15 and training camps scheduled to open on the 19th. Tommy Condell, hired on this year as the receivers coach, will take on the OC role.

Jones, Steinauer and Condell stood together on Monday and addressed the situation, with at least no outwardly signs of concern. With 10 years of OC experience in the CFL and NCAA, including a three-year run in Hamilton from 2013 to 2015, Steinauer has reason to be confident.

“We’re going to do it together,” Condell said of the offensive plan moving forward, listing off the entire offensive coaching staff.

“We know the players will do well what they did well in the past. It wouldn’t be a smart thing to do, to (go away from) some of the things they did incredibly well.

Part of the calm on Monday stemmed from the nature of Jones’ hire. The Ticats knew the situation when Jones came to the team in 2017 and quickly built something out of what many thought was rubble.

“I think first and foremost June has always been completely honest with Bob Young, Scott Mitchell, myself and now when Orlondo became the head guy himself,” said Shawn Burke, the Ticats’ senior director of personnel and co-manager of football operations.

“We always knew there was the possibility of this type of thing with him. It was year-to-year with him and he was always upfront and honest with that.

“That’s one of the reasons you bring in a guy like Tommy Condell, is to have that succession plan in place in case something like this did happen.

“From Day 1 when he said he’d come up and help us out the first season, he said, ‘Yeah, I’m going to take this on,’ it was always under the premise that we knew it was always year-by-year at this stage.”

Jones was the head coach of the University of Hawaii from 1999 to 2007 and at Southern Methodist from 2008 to 2014. They were the two longest stays of his career. At this point of his career, he’s not after a forever job. He’s 66 now and as he said on Monday, the names don’t come to him as easily as they used to. But he remembers numbers and plays and the Ticats are proof that he can get a room full of players to buy in and produce.

“Every situation I’ve been in as a coach, from the start we were the worst team in the league, both college and pro,” he said. He’s a builder, a developer and a master renovator. The honesty that he brought to the Ticats execs extended to his players and the media, too.

Ask Jones about a player being absent from a practice on Day 1 or 2 and he might tell you flat out that he’s not playing that week. Or why a backup was getting more reps at a position than the starter and he’d just say he’s making a change at that position. On a day to day basis, June Jones might have been the most honest coach the CFL had seen in years.

Steve Milton, the longtime great sports columnist at the Hamilton Spectator lamented that in the span of one off-season the team he’s covered for the last 40 years had lost two of its greatest-ever storytellers, in Jones and his figurative siamese football twin, Jerry Glanville.

It was a short, but fun and refreshing run. 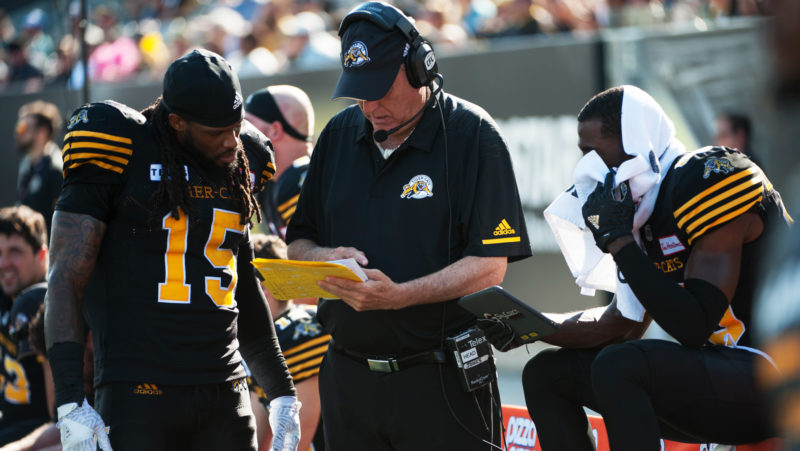 “We knew who he was and that’s part of being in the business as long as he was,” Burke said of Jones.

“He doesn’t care what people think. He’s 66 and he’s been through everything. To him, there’s no sense hiding (information). Defensive coordinators in the league are going to throw on a tape they’ll know what he’ll run but he’s still going to run it.

“It’s just a complete honesty at all times with him. It was great for reporters, but it’s also great for management like me, when you know he’s going to play with this guy or not that guy it makes your job easier.”

His departure had been a couple of weeks in the making and in that time, Jones worked quickly with Condell and Steinauer, doing his best to set them up going forward. He also took time to reach out individually to staffers with long, personalized emails.

“The people. That always makes the decisions harder for me. I get attached to the people in the organization, the kids, the players,” Jones said of his season and a half in the CFL.

“I’d talked, I’d been talking (with the Houston team). I told them no and then the more I sat on it, the more I realized that this may be one of the funnest opportunities that I’ve had as a coach.

“It gets me back to finding receivers that nobody wants and turning them into players. Finding quarterbacks is probably the most difficult thing but I like the challenge of finding those guys.

“I’m excited about that opportunity.”