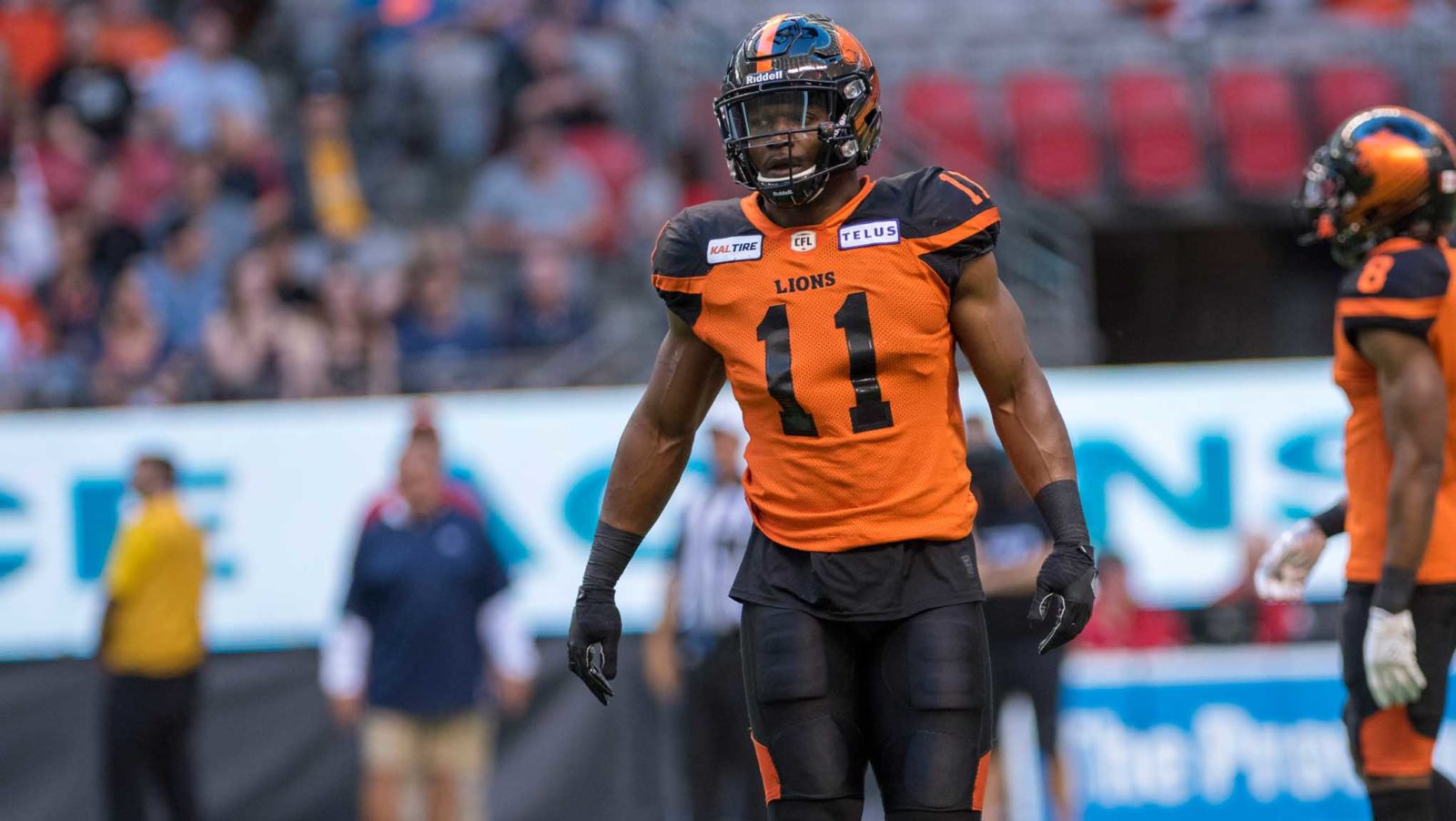 VANCOUVER — Lions fans have a lot to be excited about this season.

It’s been a busy six months on the west coast, where Ed Hervey has made drastic moves on both sides of the ball as he continues molding the roster to his liking two years after his arrival.

The biggest game-changer, however, was the addition of former Most Outstanding Player Mike Reilly, whose four-year free agent deal with BC marks arguably the biggest off-season signing since Doug Flutie back in the 90s. In Vancouver, Reilly is tasked with not only making the Lions a contender but also becoming the face of the franchise.

Still, as the veteran looks to pivot the Lions into the West Division driver’s seat, there are several other factors at play. Can outspoken receiver Duron Carter re-establish himself in an exciting new role? Will DeVone Claybrooks acclimate quickly in his first job as a head coach?

Let’s break down the new-look roster, starting with an offence that’s expected to put up big points all year long: 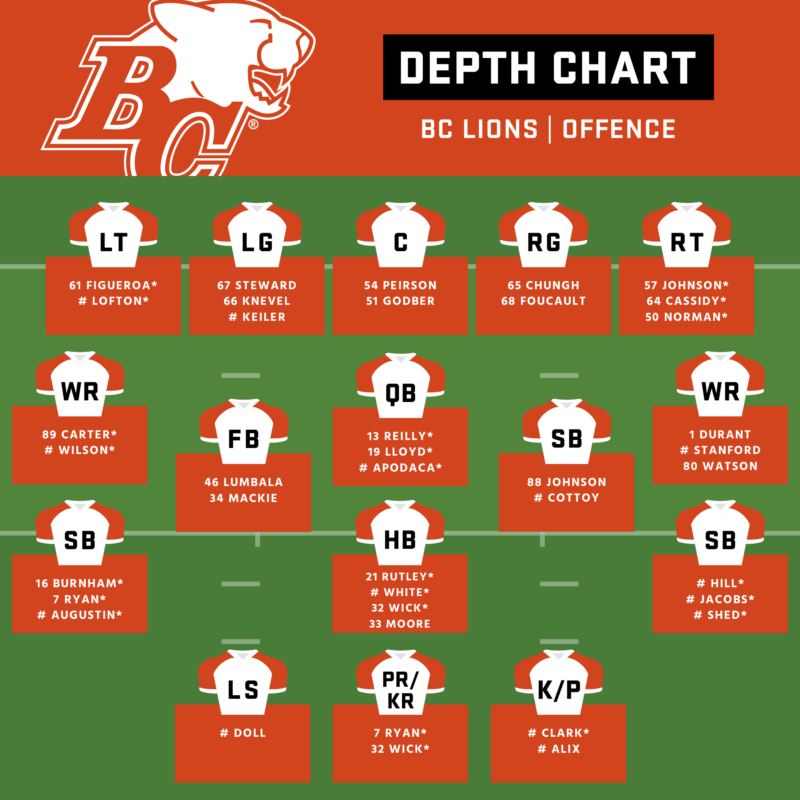 For the Lions, their 2019 chances begin and end with their new franchise quarterback. Reilly’s career has gone full circle, as one of the generation’s biggest stars returns to where his career began. While the 34-year-old could bring plenty of fans to BC Place, his ability to win football games will be his biggest impact.

On paper, the tools are there to make it happen. After some assumed the Lions would go after Derel Walker, Reilly’s former target in Edmonton, the Lions made a different kind of splash by adding Duron Carter. Carter is one of the league’s most unique personalities, while his play on the field can’t be denied. If Carter reaps the benefit of a proven elite quarterback — something he’s never had in his career — he’ll form quite the duo alongside Bryan Burnham.

While free agent signing Lemar Durant bolsters the receiving corps, the Lions’ Canadian contingency gets a huge boost on the offensive line with the signing of Sukh Chungh. If Hervey wanted to get meaner in the trenches, Chungh fits the bill. He’ll team up with Hunter Steward at the guard position, while Andrew Peirson and Peter Godber appear to be in a battle for the starting centre position.

At running back, Tyrell Sutton, Jeremiah Johnson and Brandon Rutley made up a platoon in 2018. Rutley will get another chance to run away with the starting job following a season-ending injury last year, though he faces some stern competition from former Ticats and Eskimos running back John White.

As much as the offence has changed, the other side of the ball is barely recognizable just a few weeks out from the season. Let’s break down the Lions’ defence: 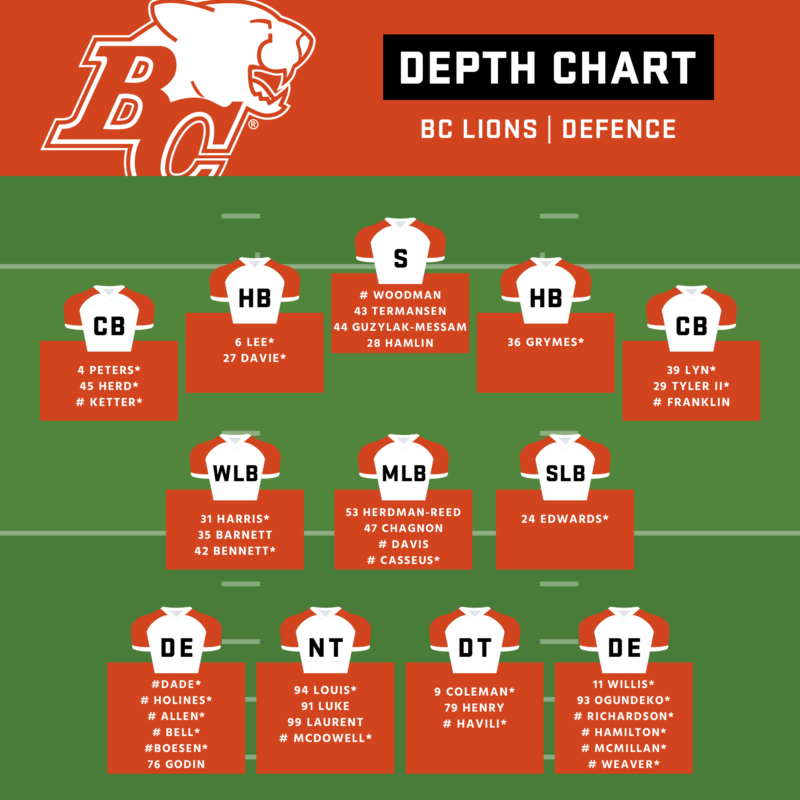 Veteran coordinator Rich Stubler will oversee the Lions’ defence, but you can be certain that Claybrooks, one of the CFL’s top rising star coaches, will have plenty of influence in that side of the ball. On a unit that could have as many as seven new starters, the talent is there but how quickly can it gel?

The defensive line looks largely familiar, led by dominant pass rusher Odell Willis. The 34-year-old is winning his race against time so far, coming off an 11-sack season in his first year with BC in 2018. The competition is open for the other defensive end position following the departure of Shawn Lemon, but Claybrooks has plenty of options inside. The Lions could start both American tackles Davon Coleman and Claudell Louis, or they could go with one Canadian starter in either Junior Luke or Julien Laurent.

In the middle, the Lions lost versatile linebacker Micah Awe to free agency, while nine-year veteran Solomon Elimimian was released last week. If Jordan Herdman-Reed can pick up where he left off last season, he’ll give the Lions a Canadian presence at middle linebacker, providing some much-needed ratio flexibility on the defensive side of the ball. Free agent addition Maleki Harris could start on the outside after four seasons as a backup/special teamer in Calgary.

While the Lions’ secondary is almost entirely unfamiliar, it’s led by big-name free agent signing Aaron Grymes. The 28-year-old emerged as one of the better halfbacks in the league in his time with Edmonton, and is coming off a 58-tackle, three-interception season. Grymes and returning veteran T.J. Lee make up one of the league’s better halfback duos. Garry Peters, Keon Lyn and Josh Woodman will all have a chance to win jobs in camp, but don’t rule out another signing before the season as some veterans remain on the market.

On paper, Ed Hervey has made the most of his situation after putting a lot of money into his star quarterback. The Lions were still able to land some big names on both sides of the ball, and will look to uncover some more budding stars in training camp. If Claybrooks can recapture just some of the success he had in Calgary, the Lions are expected to contend for a Grey Cup.