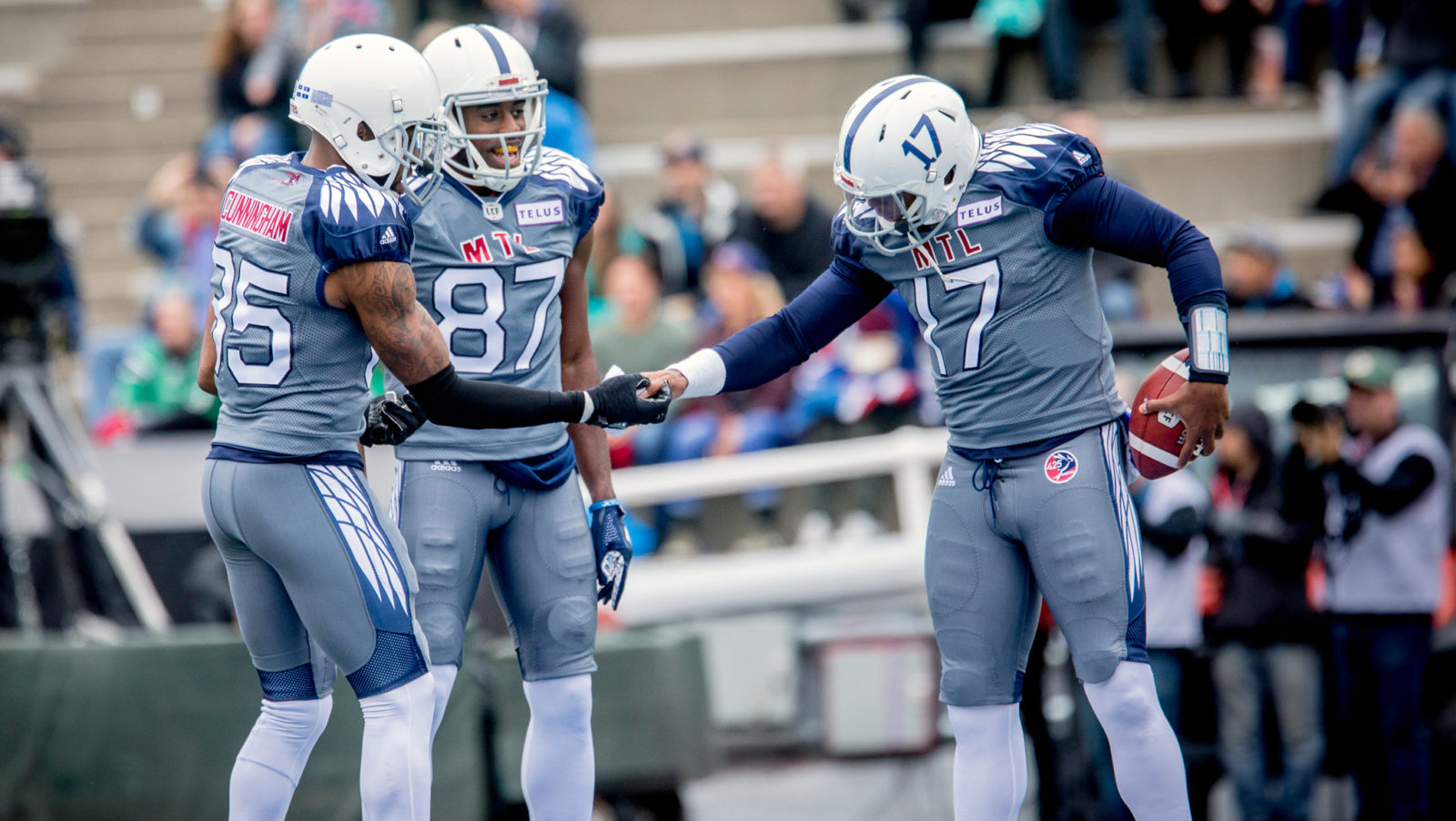 MONTREAL — The Alouettes’ off-season has been anything but quiet.

While Johnny Manziel’s departure dominated headlines, General Manager Kavis Reed has added some key pieces that could help the Als take another step next season.

Despite the Johnny drama — and another season out of the playoffs — the Als can take some positives out of 2018, stringing together a 4-5 record over the second half of the season while leaning on an emerging young core featuring William Stanback, Eugene Lewis and potential starting quarterback Antonio Pipkin.

The question heading into Mike Sherman’s second season as the Alouettes’ bench boss: what’s next?

Taylor Loffler, Bo Lokombo and DeVier Posey are among new starters added to the roster, while a young, up-and-coming offensive line has been reinforced and is poised to improve in 2019.

The Alouettes’ roster is the deepest it’s been since Reed’s hiring as general manager, but will it be enough? CFL.ca breaks it all down, starting with the offence: 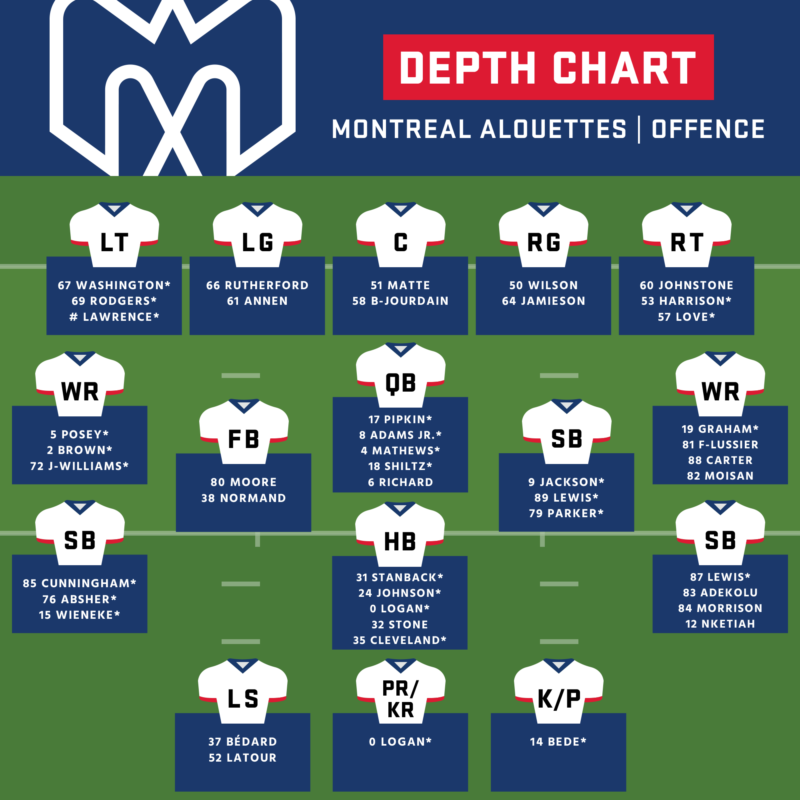 After posting a league-worst 282.2 yards per game last season, the Alouettes’ offence has potential to surprise in 2019. Second-year head coach Mike Sherman has an intriguing collection of young talent at his disposal, with the addition of vertical threat DeVier Posey rounding out a fast, athletic arsenal of playmakers.

In the end, though, all the talent in the world won’t make up for a leaky O-line and a struggling quarterback. Both areas present red flags for the Als heading into the new season, and it starts behind centre. Many are bullish on the prospects of 23-year-old Antonio Pipkin, whose strong arm, fast legs and ability to improvise were all on display throughout a handful of starts last season. Still, Pipkin also showed a lack of experience and will have to earn the job in a wide open competition against Vernon Adams Jr., Jeff Mathews and Matthew Shiltz.

The Alouettes hope that whoever starts at quarterback will have the benefit of an improved offensive line. It’ll be difficult to do worse than the 66 sacks allowed last season, and an extra year of experience should do wonders for the youngest O-line in the CFL. Sophomores Tyler Johnstone and Trey Rutherford will be critical to success after costing the team a top-two draft pick in back-to-back years. Johnstone, a ratio-breaking tackle, could be a cornerstone for years to come. Spencer Wilson, added from Calgary in free agency, adds depth, experience and versatility to the unit with his ability to play both guard and tackle.

If the O-line holds up and the quarterback gets them the ball, the Alouettes’ receivers have the potential to do serious damage. It’s a diverse group, from the steady veteran hands of Ernest Jackson to the big playmaking ability of B.J. Cunningham. Eugene Lewis is one of the league’s fast-rising stars at the receiver position, while T.J. Graham and free agent addition DeVier Posey have the speed to beat a defence deep. Thanks to their impressive ratio flexibility, the Alouettes could start five American receivers, though Canadian Felix Faubert-Lussier along with draft picks Kaion Julien-Grant and Chris Osei-Kusi are also in the mix.

The most exciting part of the Als’ offence may just be at running back, where 24-year-old William Stanback is coming off an impressive rookie season. The six-foot, 233-pound running back has a unique blend of size and speed, and put it to good use last year with a 6.7-yard rushing average. Stanback could have some rushing titles in his future, while free agent signing Jeremiah Johnson adds some veteran experience to a talented Montreal backfield.

Now let’s turn to the defensive side of the ball: 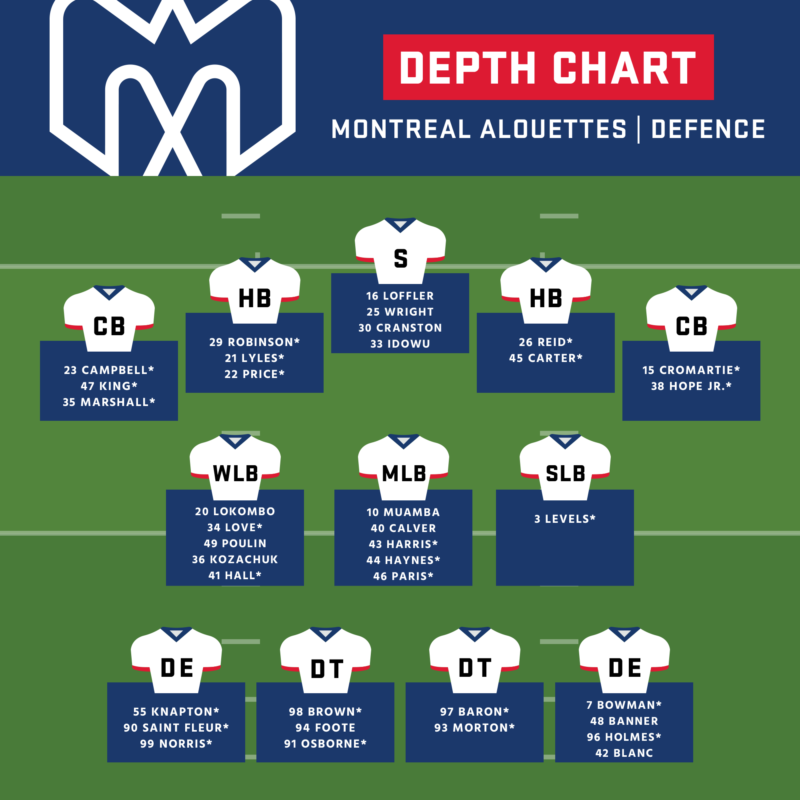 Similar to the offence, a talented defence is overshadowed by questions going into the new season. It actually starts on the sideline, where former NFL coordinator Bob Slowik will be in charge of the Als’ scheme and playcalling. With Sherman in just his second CFL season and Slowik in his first, the Als’ inexperience will be something to monitor early in the season following the departure of Rich Stubler.

On the field this is a strong enough group to make some noise in 2019, starting with free agent signing and three-time CFL All-Star Taylor Loffler. The veteran safety is a hard hitter, a playmaker and a leader, bringing an immediate upgrade to a secondary that flashed promise throughout 2018. Shutdown corner Tommie Campbell will lock down the boundary, leaving Jermaine Robinson, Chris Lyles, Greg Reid and former NFL corner Marcus Cromartie, among others, to compete for starting jobs.

While Loffler’s addition is significant, the signing of national WILL linebacker Bo Lokombo changes the Alouettes’ linebacking core. The 28-year-old had 71 tackles, four sacks and two interceptions in his first season as a full-time starter with the Lions, and forms the league’s top national duo at the position alongside Henoc Muamba. Twenty-four-year-old Patrick Levels, meanwhile, could be the Alouettes’ SAM linebacker after winning a Grey Cup with Calgary.

Despite an intriguing back end, the front four will need to generate more pressure this season for the defence to improve. Last year no Alouettes defensive lineman had more than five sacks, while the Als’ 39 sacks put them sixth in the CFL. The return of John Bowman, 36, provides an emotional boost to that unit, while Gabriel Knapton looks to lock down a starting job on the opposite end. On the interior, Fabion Foote will try to expand his role this year following the release of Jabar Westerman, but the Als could start two Americans with Woody Baron and Ryan Brown both in the mix to start.

All in all this year will be a boom or bust season for the Alouettes’ front office. If a couple of things go their way, they could be the surprise team of 2019. Otherwise, it’ll be back to the drawing board in Montreal.