Checking Down: An all-Canadian O-line in the capital? 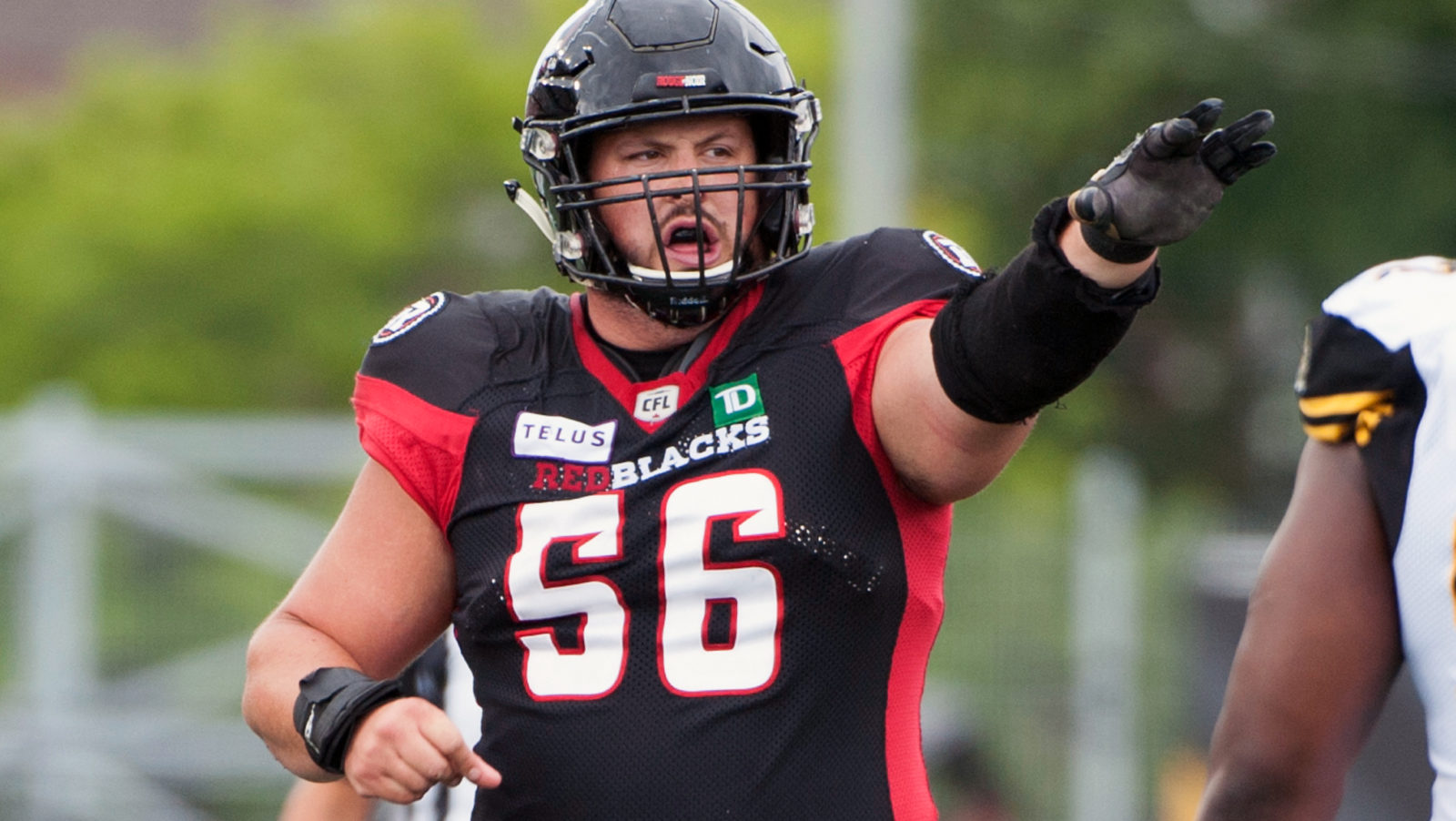 Checking Down: An all-Canadian O-line in the capital?

TORONTO — With the first pre-season game in the books, the countdown to 2019 kickoff continues.

While the Alouettes deal with injuries on their O-line, the REDBLACKS are looking to overcome two big off-season losses up front. Could they go with five starting Canadians?

Elsewhere, Romar Morris is back with the Stamps, while Ticats receiver Luke Tasker remains sidelined as his status is up in the air.

– As the offence struggled, Shakeir Ryan created plenty of buzz in his bid for a job, scoring the Lions’ only points on a 63-yard punt return touchdown (Matt Baker, BCLions.com).

– The battle for the backup quarterback job got off to a shaky start on Sunday, as Cole Sears, Austin Apodaca and Ricky Lloyd failed to generate any points in a 27-7 loss (Dan Barnes, Postmedia).

– The Lions have added another name to their kicking competition, signing veteran Sergio Castillo (CFL.ca). 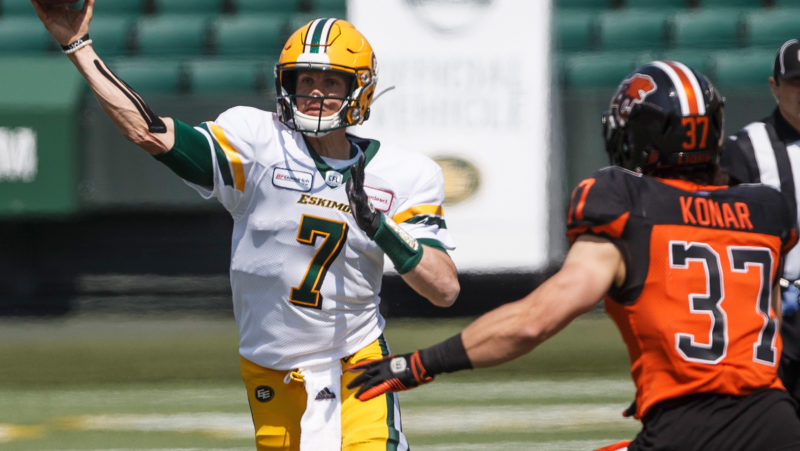 – With a strong performance in Sunday’s pre-season opener, Logan Kilgore is in position to compete for the backup job to Trevor Harris (Terry Jones, Edmonton Sun).

– For Kilgore, familiarity with Jason Maas’ offence from his days in Toronto helped him get prepared quickly for the team’s pre-season opener (CFL.ca).

– It appears that Jordan Beaulieu is very much in the running to start at safety in Edmonton after playing with the starters on Sunday (Dave Campbell, CHED).

– Veteran Tommie Draheim appears to be in line to replace injured SirVincent Rogers at left tackle after getting the start on Sunday (Dave Campbell, CHED).

– With Brad Erdos sidelined for the season, there’s a chance the Stamps will start Justin Lawrence at centre and move 2018 first round pick Ryan Sceviour to guard (Danny Austin, Calgary Herald).

– After a strong performance at the team’s annual Red and White scrimmage on Sunday, American receiver Aaron Peck appears to be making a name for himself (Danny Austin, Calgary Herald).

– A week after being released, injured running back Romar Morris has returned to the Stamps, the team announced Sunday (CFL.ca).

– Riders defensive end and special teams ace Jordan Reaves confirmed this week he has suffered a season-ending injury (via Twitter).

– With all eyes on the quarterbacks, it was Cody Fajardo stealing the show in the Riders’ Green and White scrimmage on Saturday (Murray McCormick, Regina Leader-Post).

– A notorious hard worker, perhaps it’s no surprise that Emmanuel Arceneaux appears to be ahead of schedule in his recovery from a torn ACL late last summer (Kristina Costabile, CFL.ca).

– It appears Kenny Lawler and Rasheed Bailey are the front-runners for the last remaining job in the Bombers’ receiving corps (Ted Wyman, Winnipeg Sun).

– While Matt Nichols comes to Bombers camp with improved mobility, the biggest impact may be felt in the passing game as he works in the pocket (Ed Tait, BlueBombers.com).

– As the battle heats up in the Bombers’ secondary, Chandler Fenner appears to have an inside track on a starting job early in camp (Ed Tait, BlueBombers.com).

– With veteran guard Patrick Neufeld still sidelined, the Bombers are getting a closer look at up-and-comers Geoff Gray, Drew Desjarlais and Cody Speller, among others (Ted Wyman, Winnipeg Sun).

– After being injured early in training camp, Luke Tasker remains sidelined from practice but is reportedly no longer in a walking boot (Kyle Melo, TSN).

– With two late additions at tackle in Chris Van Zeyl and Ryker Mathews, the Ticats’ O-line has a much different look as the pre-season approaches (Brandon Tretter, Ticats.ca).

– Can Brandon Banks build on his rapid ascent as one of the CFL’s best receivers? The Ticats’ pass-catcher is one of the top players to watch league-wide in 2019 (Pat Steinberg, CFL.ca).

– After leaving his job and his home for a CFL opportunity, Mexican receiver Jose Noriega is chasing his dreams with the Hamilton Tiger-Cats (Chris O’Leary, CFL.ca).

– With several new faces in camp, the Argos tested their special teams units with an officiated practice on Sunday (Frank Zicarelli, Toronto Sun).

– It’s a crowded running back room in Toronto, but the Argos are calling it healthy competition as veteran backs James Wilder Jr., Chris Rainey and Tyrell Sutton battle for carries (Matthiew Scianitti, TSN).

– In his new role as Argos’ starting quarterback, James Franklin called 2018 the most miserable he’s ever been playing football (Chris O’Leary, CFL.ca).

– As the REDBLACKS’ quarterback competition heats up, Rick Campbell says there’s been no real separation between Jonathon Jennings and Dominique Davis (TSN 1200).

– One advantage that Davis might have in his pursuit of the No. 1 job is his athleticism, something Campbell says could pose a challenge for opposing defensive coordinators (TSN 1200).

– After taking the majority of reps during the Alouettes’ scrimmage on Saturday, it appears Antonio Pipkin is the clear front-runner for the starting quarterback job (Joey Alfieri, 3 Down Nation).

– The Als are dealing with injuries on the O-line in camp, with projected starters Tony Washington, Tyler Johnstone and Spencer Wilson all missing time (Didier Orméjuste, RDS).

– Rookie pass-catcher Jake Wieneke has had a strong camp and appears to be a candidate for a starting job in the Alouettes’ receiving corps (Joey Alfieri, 3 Down Nation).

– Among all the factors that led DeVier Posey to Montreal, a talented defence was near the top of the list (Don Landry, CFL.ca).