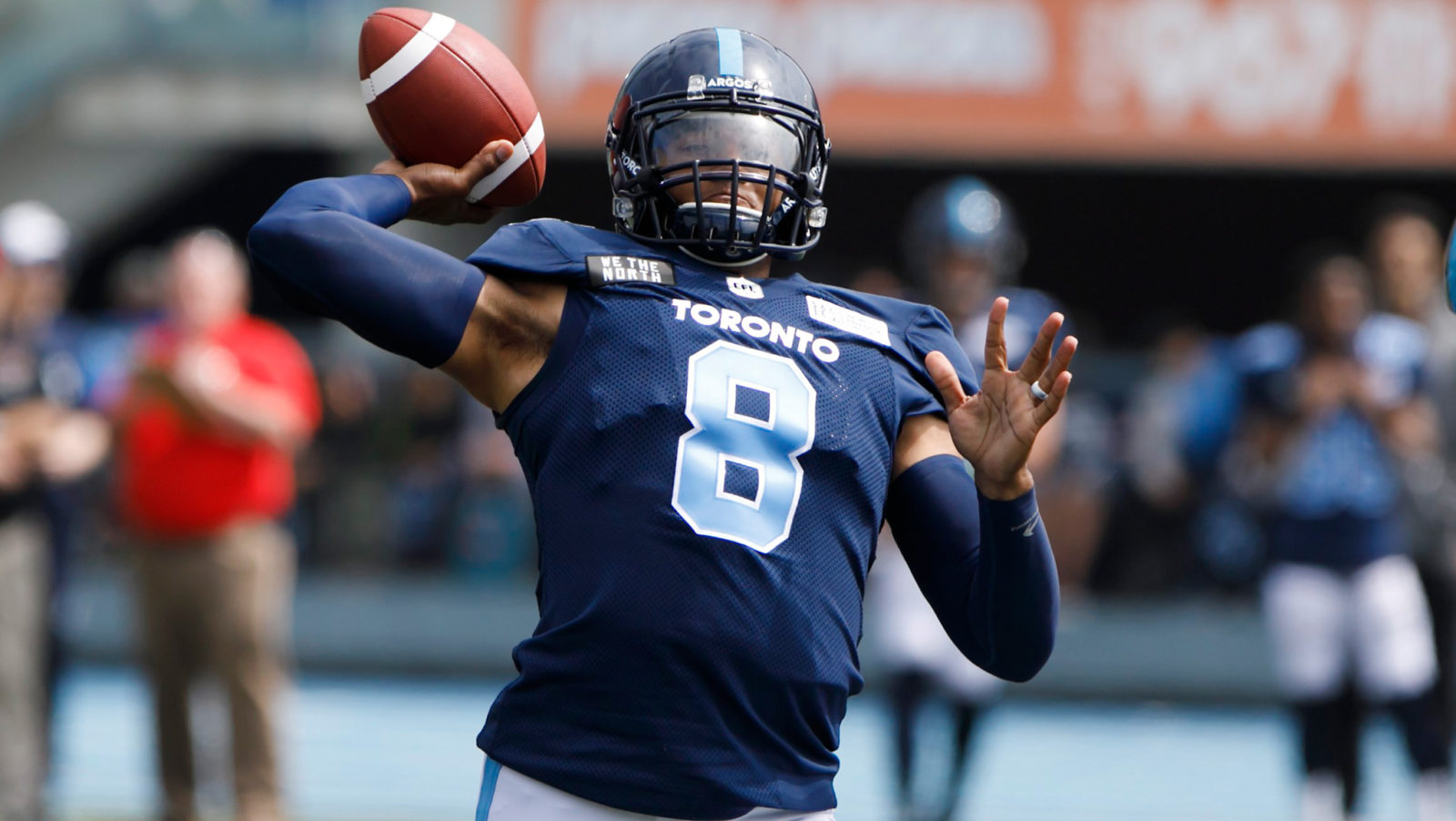 The Argos’ hopes of defending their Grey Cup title were crushed when quarterback Ricky Ray sustained a neck injury against Calgary on June 23 that would eventually force the retirement of the future Hall of Famer. Without Ray at the helm, the Argonauts’ passing game fell to fifth overall while the offence produced only 35 total touchdowns. Coach Marc Trestman was fired shortly after season’s end, ushering in the era of new coach Corey Chamblin and quarterback James Franklin.

Talent-wise, the Argos are much better than their 4-14 record from 2018. However, they will need Franklin to take his game to higher altitudes in order to become serious contenders for the East Division title.

Fantasy users know Franklin can run the ball. Now they – and the Boatmen faithful – need to see him emerge as an efficient passer. Acquired by the Eskimos at the beginning of 2018, Franklin was thrust into the starting job following Ray’s injury, but four miserable starts led to his being benched in favour of McLeod Bethel-Thompson, only to regain the role when Bethel-Thompson failed to energize the offence. Franklin finished with a paltry 2,034 passing yards with an 8:9 TD:INT margin while only twice throwing for multiple majors. The Argonauts were last in average gain per pass (7.1) and tied the Roughriders with a league-low 22 completions of better than 30 yards.

Franklin’s running ability made him somewhat Fantasy viable as he rushed for franchise-record 14 touchdowns while also tying Doug Flutie’s CFL mark for rushing majors by quarterback in one season. There is no question Franklin has the tools to be a dual-threat passer, and if he is able to become more aggressive under offensive coordinator Jacques Chapdelaine, he will also gain the trust of Fantasy users as the season progresses. 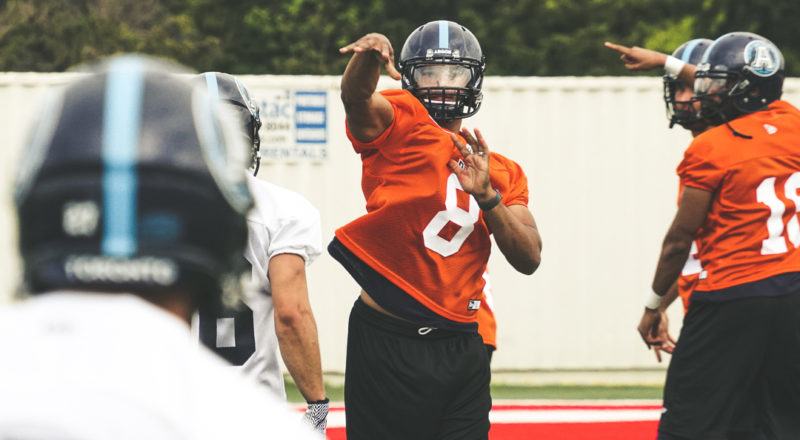 McLeod Bethel-Thompson was unable to regain the spark of his first start when he threw four touchdown passes in a wild shootout against Ottawa, managing just five more scores over his next seven starts before being replaced by Franklin. He will compete with former Roughriders pivot Brandon Bridge, who also endured a brutal 2018 that saw him throw only one touchdown in 131 attempts before an ineffective start in the Western Semi-Final spelled the end of his stint in Saskatchewan.

Like most of the offence, running back James Wilder Jr. was anything but the performer he was in 2017, but if there’s a short list of players with a chip on their shoulder, Wilder’s name is on it.

Things looked good when Wilder rushed for 120 yards and a touchdown against the Eskimos in Week 4, but it proved to the high-water mark for the 2017 Most Outstanding Rookie, who eclipsed better than 60 yards just four times before a season-ending injury in Week 16 ended his campaign with 691 yards on 147 carries and three touchdowns. Wilder’s 4.7-yard average was a far cry from the 7.1 yards per attempt in his rookie season, but did remain a productive receiver, pulling in 56 passes for 539 yards and a score.

The 232-pound sledgehammer had a productive off-season and should return at or near the top of the most productive backs in Fantasy play in 2019. A full season of play should translate to around 1,800 yards from scrimmage for Wilder, who has the ability to become an efficient scorer near the goal line.

There is quality depth in the backfield. Former 1,000-yard rusher Tyrell Sutton, who played with both the Alouettes and Lions last season, signed in the off-season along with Chris Rainey, who finished second in the league with 2,626 all-purpose yards. Both would see their Fantasy value increase if required to replace Wilder for an extended period; Rainey will compete with defensive back Kevin Fogg for return duties. Brandon Burks averaged 6.2 yards per carry while taking the bulk of the carries after Wilder went down, while the Argos also added national Mercer Timmis, who rushed for 133 yards and two scores in Week 2 against Edmonton but quickly faded out of the picture in Hamilton.

S.J. Green finished fifth in the league with 1,095 yards despite the shaky play at quarterback and earned East All-Star honors for a second straight year. A third consecutive nod is in the offing for Green if Franklin can make the most of his targets. No receiver in the league was targeted more in 2018 than Green, who had 155. His seven receptions of better than 30 yards accounted for nearly a third of the Argos’ big-play production.

Determined not to make Green such a popular option, the Argonauts signed Derel Walker from the Eskimos. Walker, who joined Edmonton after being released by the Tampa Bay Buccaneers, pulled in 51 passes for 875 yards and eight touchdowns in 11 games. He is reunited with Franklin and will give the Argos a needed downfield threat, as his 17.2 yards per catch was among the league leaders. Both Green and Walker are proven as Fantasy options, and both should develop into the type of performers that gain weekly consideration from Fantasy users.

New Argos receiver Derel Walker was one of the off-season’s biggest acquisitions (Argonauts.ca)

A strong finish to the regular season allowed Armanti Edwards to finish with 974 yards and team-best eight catches of 30-plus yards. He will also regain the trust of Fantasy users with improved quarterback play. The offence could receive a huge jolt with the presence of a healthy Anthony Coombs, who played in just two games. The versatile slotback is an elusive force of nature that can change the complexion of the Toronto passing attack when he is on the field and could be a sneaky-good Fantasy option.

A handful of youngsters will seek to grab their share of passes. Mario Alford, Llevi Noel, Jimmy Ralph, Rodney Smith and Cole Watson each have upside. Newcomers Regis Cibasu and Nate Rogers are also brimming with potential, although they all have little Fantasy value coming into the season.

The return of Chamblin to help oversee the defence was a huge first step in turning things around, as well as the return of Shawn Lemon, who had 10 sacks for the Lions after being traded to BC early in the season. The Argos had just 24 sacks last season and will also count on newcomer Tobi Antigha (three interceptions, two sacks) to help apply pressure to opposing pivots. Micah Awe will be the focal point of the linebacking corps following the release of veteran Bear Woods. Youth will be served in the secondary, where Devin Butler, Likely, Marcus Roberson Jr. and Trumaine Washington are each under 26 years old.