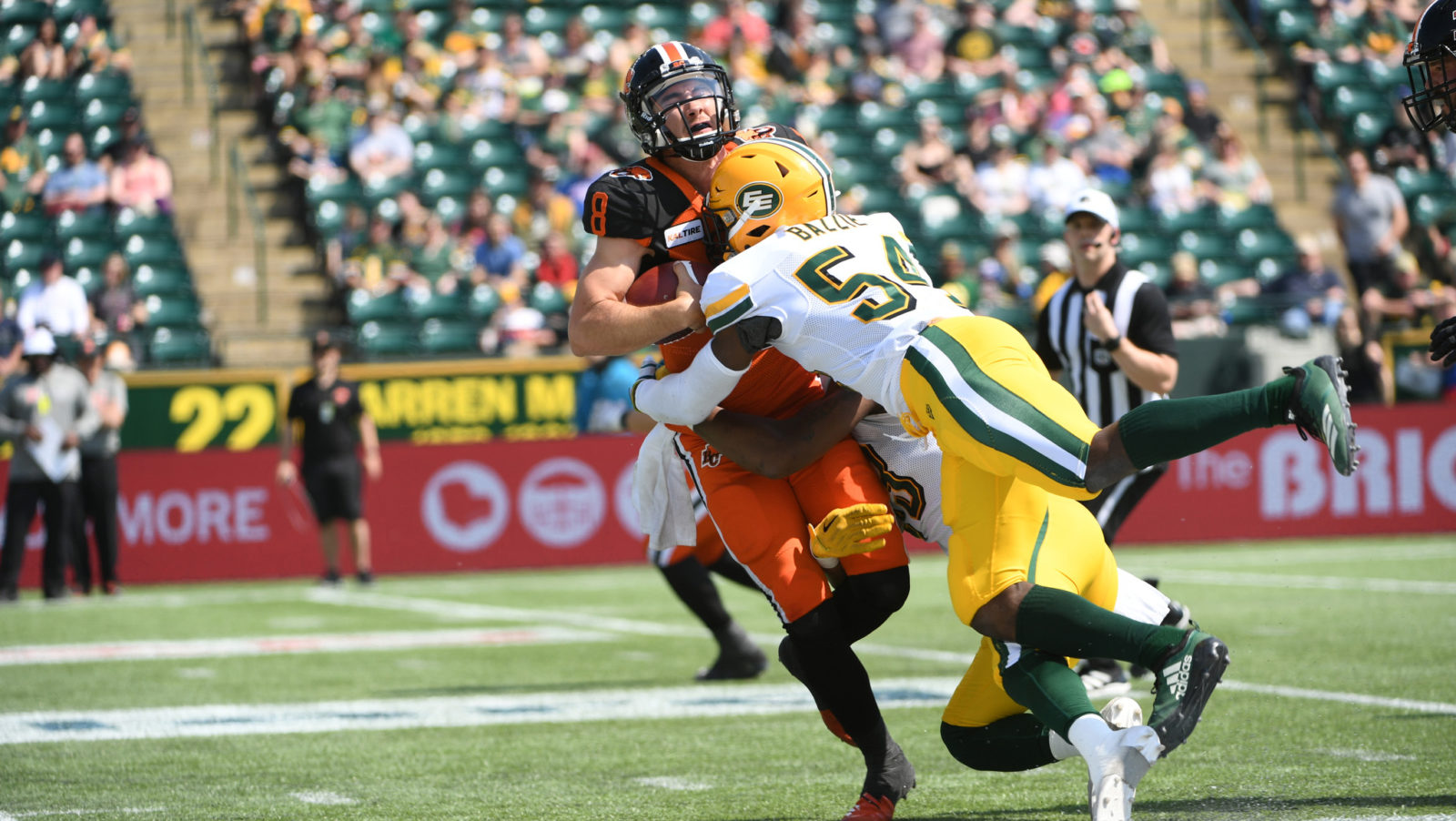 Alex Bazzie is a new man with a new attitude this season.

The 28-year-old defensive end feels free to play without having to constantly prove to his teammates that he deserves to be here and it showed in Sunday’s pre-season game against the BC Lions.

Bazzie had a quarterback sack and just missed a couple of other opportunities as the entire starting defensive line – including Kwaku Boateng, Almondo Sewell and Mike Moore – went hard after the Lions’ starting quarterback.

“Last year, around this time, we were all so hungry for ourselves rather than being hungry for the group,” Bazzie said. “This year, we said, ‘Hey, let’s start off a little different. Let’s be hungry for one another so that it works out in our favour and the team’s favour.’ We really kept reminding ourselves on the sidelines.” 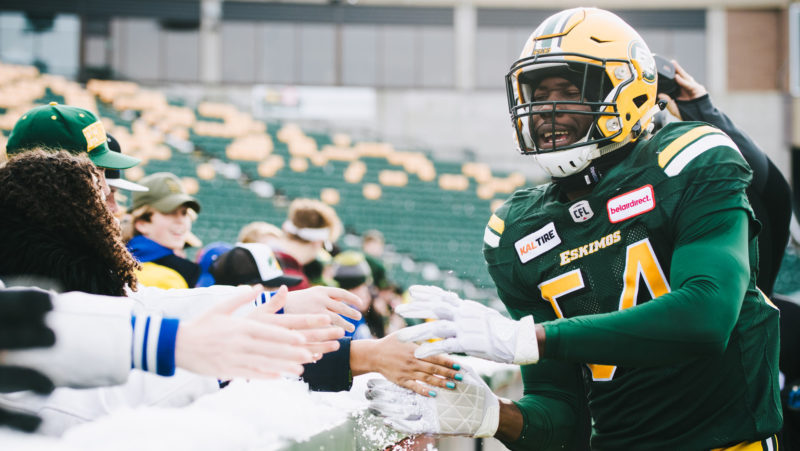 “We were putting pressure on that quarterback,” he continued. “Of course, he was a young guy. His jitters were showing a little bit, but at the end of the day, it felt good for us to know that even though this guy is a new quarterback, we were doing what we have to do against either a new quarterback or a veteran quarterback. This is the type of performance we need to put up.

“It was just a confidence booster to be able to go out there and know that us working together as a group is much easier than going out there and working for yourself.”

Bazzie, himself, was actually his biggest obstacle to overcome last year after signing a contract with the Eskimos. Burdened by his own expectations, he spent a good chunk of the 2018 season worrying that he had to justify his position on the team with quarterback sacks and the six-foot-one, 228-pound native of Liberia, Africa, had only one after the first eight games.

“I just felt like I had to produce sack-wise,” he said. “I kept thinking, ‘Sacks! Sacks!’

“But I had the wrong mindset about everything. Little did I know that I wasn’t paying attention to the (quarterback) pressures I was getting and how much I was contributing through just getting pressures and helping to stop the run and all the other little things because I was just so worried about the sacks.

In conversations with his new teammates, he would say, “I’m working so hard, but at the end of the day, I don’t have a sack!”

“Guys like J.C. (Sherritt) had to calm me down each week and say, ‘Hey, man, you’re doing a lot of great things out there. We’re winning games (at that point of the season), so don’t stress,” Bazzie recalled. “The sacks are going to come.”

Bazzie sacked a quarterback seven times over the last 10 games and played a role in helping Kwaku Boateng lead the team with nine sacks while Jake Ceresna finished strong to tie Bazzie at eight and multiple all-star defensive nosetackle Almondo Sewell had seven.

“We had a great D-line, a very competitive D-line last year,” Bazzie said. “Just knowing how much you have to compete because each guy is hungry for a sack, I just kept focusing on sacks, on sacks, on sacks. I didn’t realize how much I was helping the next teammate get a sack. Maybe if I don’t get it, I pressure (the quarterback) to step up for the next guy to get it. Just from that, I help another man produce and get a quarterback sack for the team.”

The Eskimos had 45 quarterback sacks last year to share the league lead with the Saskatchewan Roughriders, Calgary Stampeders and BC Lions.

“I want our team to have 50 (sacks this season) because we left a lot on that field last year,” Bazzie said. “You always want to take advantage of an opportunity, especially with the pressures we’re going to be bringing, as nasty as our defence is going to be. I want our group to dominate each and every game; to be very dominate where we create problems for (the opponent’s) offence and we’re so hard to stop because it’s not just one guy, it’s the entire front four.”

Bazzie said the Eskimos’ front four considers themselves “the heartbeat of this defence” because “when we get going when we start creating havoc in the background, the other guys can play comfortably and sound.”

As far as personal goals, Bazzie would to like reach double figures in sacks at the bare minimum. If he can help each of his defensive linemates do the same thing, the D-line should easily accomplish their team goal.