Cracking roster will ‘be tough’ for rookie RBs in Saskatchewan

Cracking roster will ‘be tough’ for rookie RBs in Saskatchewan

SASKATOON — After he signed with the team as a free agent this off-season, running back William Powell was slated to become the starter for the Saskatchewan Roughriders in 2019.

Marcus Thigpen will slot in for some offensive packages, as he did for the Riders last season, and Canadian Kienan LaFrance will take snaps as well as a ratio breaker.

It seems that the Riders running back room is full, so where does that leave first-year backs James Butler and Jamal Morrow?

RELATED:
» Buy Tickets: Roughriders at Stampeders
» Riders punter Ryan to receive U of R degree
» Checking Down: News and notes on the Riders 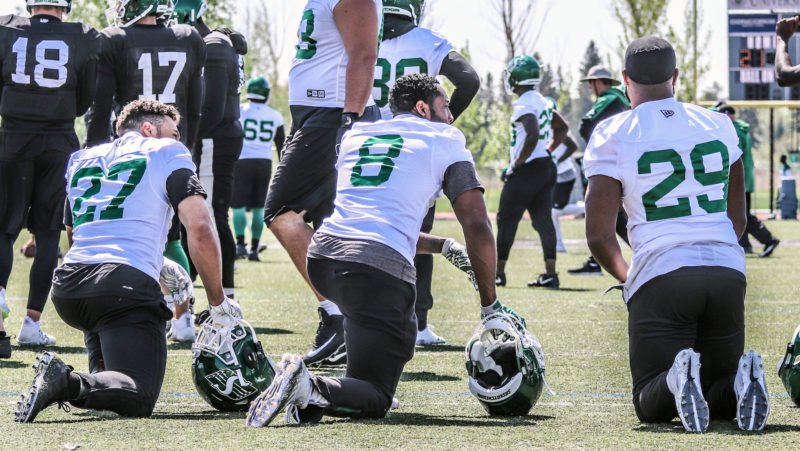 “It’ll be tough,” head coach Craig Dickenson said after practice on Tuesday when asked how hard it will be for the rookies to crack the roster.

“They’ve both gotta show up on special teams. That’s going to be their ticket. Powell’s going to be our starting back. Thiggy (Thigpen) is going get a lot of touches and we’ve got a Canadian in LaFrance as our ratio guy. One of them (Morrow and Butler) will make the team and a lot of it will depend on their ability to play special teams.”

Butler, a five-foot-nine, 210-pounder, signed with the Riders in May and is hoping to be the one to make the lineup by the end of training camp. Over his college career, Butler rushed 699 times for 3,712 yards and 28 touchdowns. He was also versatile out of the backfield, hauling in 53 passes for 485 yards and three touchdowns. The 24-year-old also spent time in the NFL, signing with the Oakland Raiders in July of 2018.

Butler’s competition, Morrow, signed with Saskatchewan in April. He spent four seasons at Washington State (2014-2017) and tallied 316 carries for 1,795 yards and nine major scores. He added 202 catches for 1,748 yards and 14 touchdowns. The five-foot-eight, 205-pounder also has special teams experience, which may be an advantage since that’s where the Riders head coach wants one of these two backs playing. The 24-year-old tallied 24 kickoff returns for 476 yards and 22 punt returns for 200 yards.

“They’re good dudes,” said Dickenson. “Both of them are good players, highly productive college players, that have gotten a look in the NFL. Didn’t work out for them so they’re just eager to put the pads on and play. It’s a good room, that running back room.”

With the team’s first pre-season game on the horizon – Saskatchewan travels to Calgary on Friday for a tilt with the reigning Grey Cup champs – Dickenson said that Morrow and Butler will handle most of the reps in the backfield for the green and white.

As for Powell, Thigpen and LaFrance, Saskatchewan’s bench boss wouldn’t confirm who will be traveling to Alberta for the contest but did say that they would be taking “more guys than people realize because we want them to go through the experience of pre-game and even a series or two.”

Kickoff between the Riders and Stamps on Friday is 9:00 p.m. ET.