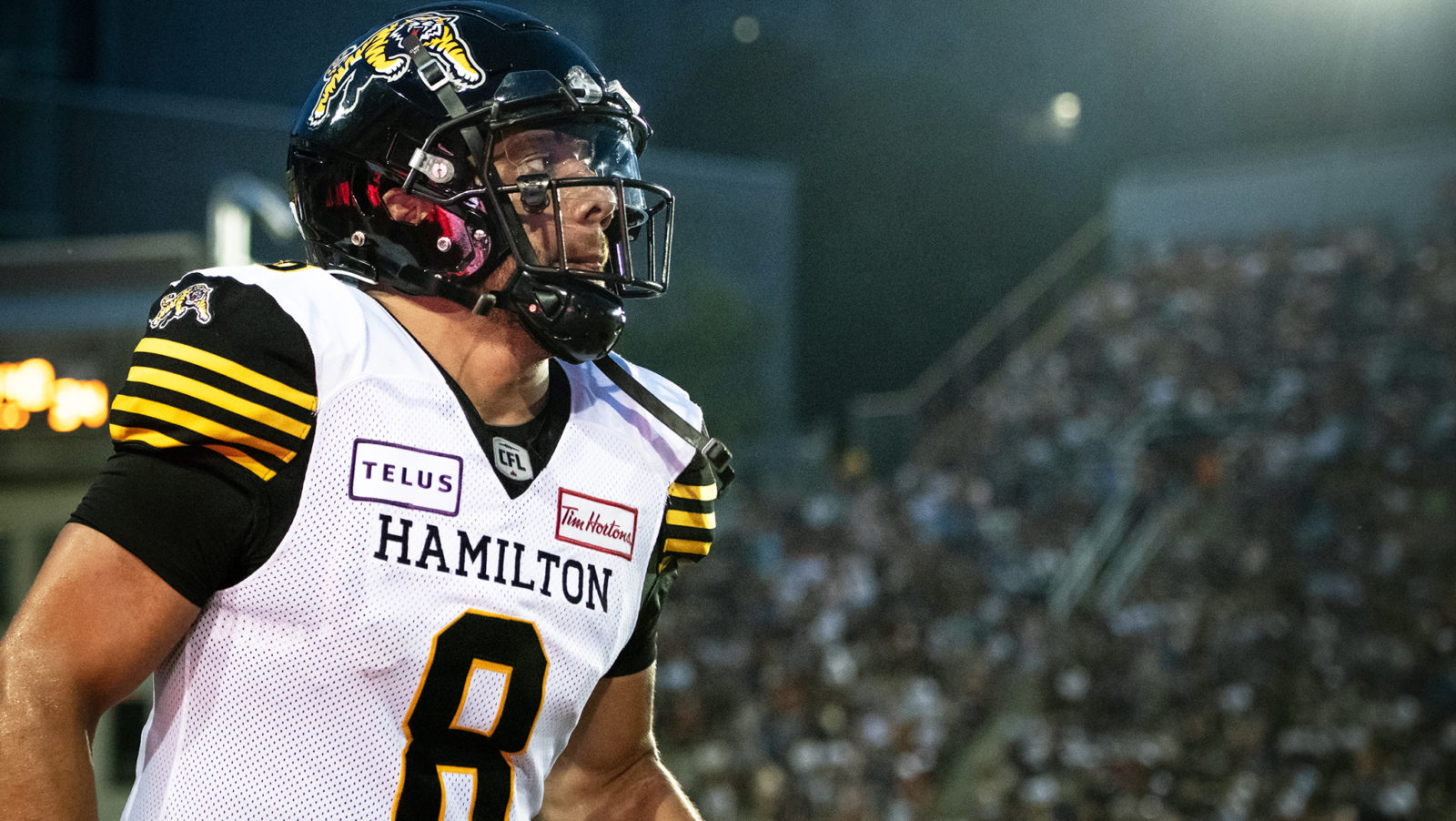 This past off-season brought an unprecedented amount of player movement, including some elite names winding up in new places.

Every new Fantasy season brings along with it some level of uncertainty, but with all the changes in the past couple months, Fantasy players will really have to do their homework to get up to speed before Week 1.

Mike Reilly has been the most valuable player in CFL Fantasy for a few years running. This February he opted for a return to BC in free agency and hopes to bring his high-flying offensive ways with him. The 2018 version of the Lions passing game, led by Jennings and Lulay, was third worst in the CFL in terms of yards per attempt (7.49), while averaging a mere 0.97 Fantasy points per attempt. Reilly, on the other hand, has averaged 8.9 yards per pass attempt over the past three seasons in Edmonton while leading the league in fantasy points per pass attempt by a wide margin (1.3). He’ll have to develop chemistry quickly in an offence featuring new faces in five of the seven skill positions, so there is work to be done, but Duron Carter and Bryan Burnham should certainly be able to push the ball downfield just as Bowman, Zylstra, Walker, Williams, and Mitchell have done so ably with Reilly in Edmonton.

Reilly certainly showed that he’s not invincible last season as he was often seen running for his life during a long skid in the second half of 2018, but even with those noted struggles he managed to pass for a league leading 5,562 yards and 30 touchdowns, accompanied by 595 rushing yards and an extra 13 scores on the ground. His combination of mobility with his legs, goal line carries, and focus downfield make him the top Fantasy option weekly at QB.

TSN CFL Fantasy is back! After a busy off-season, Pat Steinberg, Jeff Krever and Hannah Nordman are ranking the quarterbacks as they preview the 2019 season. It’s the CFL Fantasy Podcast presented by LeoVegas!

Jeremiah Masoli was second only to Reilly in terms of passing yards in 2018 (5,209) and finished only two passing TDs behind him (28) despite a slow start to the season where he was held without a passing score in three of his first five games. There were lots of fireworks in the second half of the season though as he passed for multiple TDs in six of his final eight games including five games of three TDs or more. Gone are Chris Williams and Jalen Saunders, but the trio of Brandon Banks, Luke Tasker, and Bralon Addison should be more than enough firepower for Masoli to succeed with.

The departure of June Jones raises a few questions as to how Masoli will adapt to life after the coach that breathed new life into his career. Also, like Reilly, Masoli has proven rushing ability with 473 rushing yards on 63 carries last season, adding to his value on a weekly basis.

The biggest difference between the top tier options at QB and the next group is their rushing ability. The opportunity to get a few extra points every week on the ground and have a shot at six-point rushing TDs – above and beyond four point passing scores – adds a level of upside that Mitchell, Harris and Nichols lack. Any of these still have a shot at being the top scoring player at the position weekly, but their floor is also a little lower.

Mitchell came blazing out of the gate in 2018 with at least one passing TD in each of his first 13 games, including nine games with multiple passing scores. Injuries in his receiving corps took their toll down the stretch though as he passed for over 300 yards only once in his final six games. Calgary, somewhat uncharacteristically, ran the second highest rate of passing plays in the league (61%) over the course of the season as the ground game often failed to get consistent traction. This also led Mitchell to a career high in passing TDs with 35. He will be missing three of his top targets from last season as DaVaris Daniels left for Edmonton, Chris Matthews for Winnipeg, and Marken Michel for the NFL. Returning veterans like Eric Rogers, Reggie Begelton, Markeith Ambles, and eventually Kamar Jorden, should provide enough continuity to make Mitchell a weekly part of the conversation at QB though.

Trevor Harris‘ arrival in Edmonton, along with his previous Ottawa teammates Greg Ellingson and SirVincent Rogers, usher in a new era of excitement but uncertainty for their Fantasy prospects, though Rogers has suffered an injury that will keep him sidelined indefinitely. Harris is a respected Fantasy quarterback but certainly a different style of player than Mike Reilly has been in Edmonton. That being said, Head Coach Jason Maas has been quoted as saying they expect to run to offence as usual this season.

A quick look at the numbers shows that both passers have been accustomed to high pace offences, ranking fist and third in the league respectively in 2018, but Harris’s efficiency hasn’t been quite as good in terms of yards per attempt or passing TDs per attempt. The most glaring difference of all is in the running game, where Edmonton will have to devise a new strategy on the goal line to replace Reilly’s 13 rushing TDs. Harris will also have to get used to a new receiving corps as he’ll look to gel with new targets DaVaris Daniels, Ricky Collins Jr., and a host of other new names. Harris may have more upside this season than any previous year, but his lack of rushing ability still keeps him a tier below the elite Fantasy options at QB.

In many ways, Matt Nichols feels like he should be in a tier alone just below the top four, but certainly still a significant step above the spot start options. An injury in the pre-season held him to only 14 games of regular season action. That, accompanied by the emergence of Chris Streveler as a credible option as both a passer and rusher, led to the worst statistical season Nichols has had since arriving in Winnipeg in 2015. He passed for only 3147 yards and 18 TDs, while rushing for just 52 yards and a single score. He passed for over 300 yards just once in 2018, while throwing multiple touchdowns just six times. The arrival of Chris Matthews will give him the big bodied possession target this offence has needed for years to complement their barrage of smaller speedy targets, so there is hope that 2019 may lead Nichols’ Fantasy prospects in the right direction.

Each of the quarterbacks in this tier have shown enough potential to keep from being dismissed out of hand as Fantasy options, but their appeal will be determined by their matchup and weekly price point more than their sustained production. Whether due to injuries, the risk of losing playing time, or inconsistent performance, each of these quarterbacks bring with them an element of risk that is not for the faint of heart.

Collaros put up Fantasy superstar numbers in late 2014 through early 2016, with 14 games of over 300 yards passing, 15 games with multiple passing TDs, and all while showing he was a threat to run with the ball. Unfortunately, injuries have kept him from regaining that form since as he passed for over 300 yards just once in 2018, while the Riders passed for the second fewest yards per pass attempt (7.3) and the second lowest rate of passing TDs per attempt. The arrival of Emmanuel Arceneaux gives him one more veteran weapon he lacked last season, but Arceneaux is coming off injury himself. The Riders offence has a lot to prove before Collaros becomes a regular Fantasy option.

James Franklin came into the 2018 campaign with lofty Fantasy expectations precipitated by a few big games during his days in Edmonton. Unfortunately, he struggled to live up to the hype and was replaced by McLeod Bethel-Thompson part way through the season before regaining his job to end the campaign. Franklin has shown he has elite upside as both a passer and rusher, leading the league in rushing TDs in 2018 (14), but he lacked the supporting cast to help him reach those heights. The arrival of Derel Walker may be exactly what he needs to grow into his potential in the CFL, but the struggles of 2018 as well as the continued looming presence of MacBeth on the bench give Franklin a level of risk not present in the top tier Fantasy options at QB. 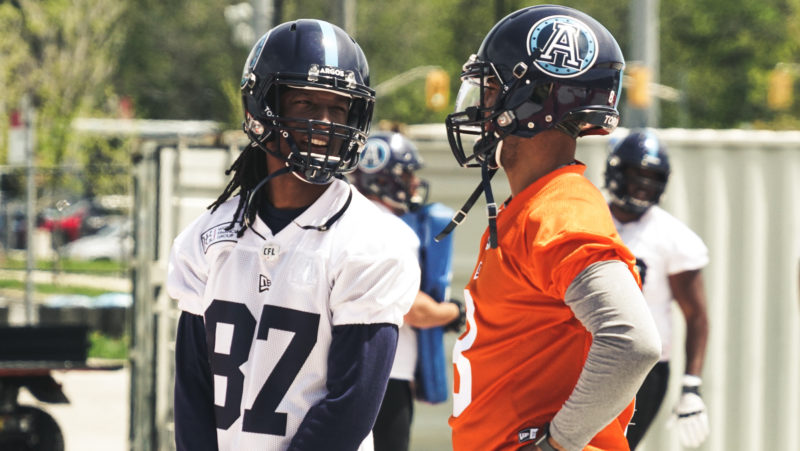 The addition of Derel Walker could boost James Franklin’s Fantasy upside in 2019 (Argonauts.ca)

Johnny Manziel was the Alouettes QB that garnered the most Fantasy conversation last season, but that didn’t keep Antonio Pipkin from pushing him to the bench at points in 2018. Pipkin was a gifted rusher (49 rush yards per game), but an erratic passer (2 interceptions per game), and that eventually led him back to the bench as well. The departure of Manziel in the off-season leaves the door open for him to step back into a starting role and the arrival of DeVier Posey is a much-needed option alongside Geno Lewis. If Pipkin can settle his mind and his feet in his sophomore season, he has the rushing upside, arm strength, and receiving options to become a regular fantasy option at QB. Unfortunately, his inconsistency along with the presence of Jeff Mathews, Vernon Adams Jr., and Matt Shiltz also vying for the starting spot makes him a risky play at this point.

Departed QB Trevor Harris in Ottawa is expected to be replaced by Dominique Davis, who will start in Week 1 over the newly acquired Jonathon Jennings from BC. Both players have similar profiles as QBs with rushing ability that struggle with inaccuracy and turnovers as passers. Jennings had a breakout season in 2016 with 5,226 yards passing and 27 passing TDs, but has seen his numbers decline in each of the following two seasons to the point where he has thrown more interceptions than touchdowns since. Davis has a much shorter resume, having been seen largely in just backup duty in his four years in the CFL. Either QB will have to work with a receiving corps filled with new faces following the departure of Greg Ellingson and Diontae Spencer and will not have the luxury of William Powell in the backfield anymore after he left for Saskatchewan. This Ottawa offence has a lot to prove going into 2019, making either Jennings or Davis a risky Fantasy prospect.

This final group of passers isn’t expected to contribute out of the gate but has each shown enough potential in short sample sizes that they could be worthy of Fantasy consideration if given a starting role. Cody Fajardo has worked primarily as a short yardage quarterback but has the strength and speed that he could excel if given ample playing time. Arbuckle hasn’t seen much action at the pro level but passed for 336 yards and 2.2 TDs per game in his senior season at Georgia State. If Mitchell goes down to injury at any point, Arbuckle could be given the reins to the powerful Stampeders offence and seems to have the potential to make the most of it. Streveler showed the inconsistencies of a rookie QB in his three starts in 2018 but showed more than enough as a rusher and passer to be a legitimate Fantasy threat if given the starting nod at some point in 2019.