Landry’s 5 takeaways from the pre-season 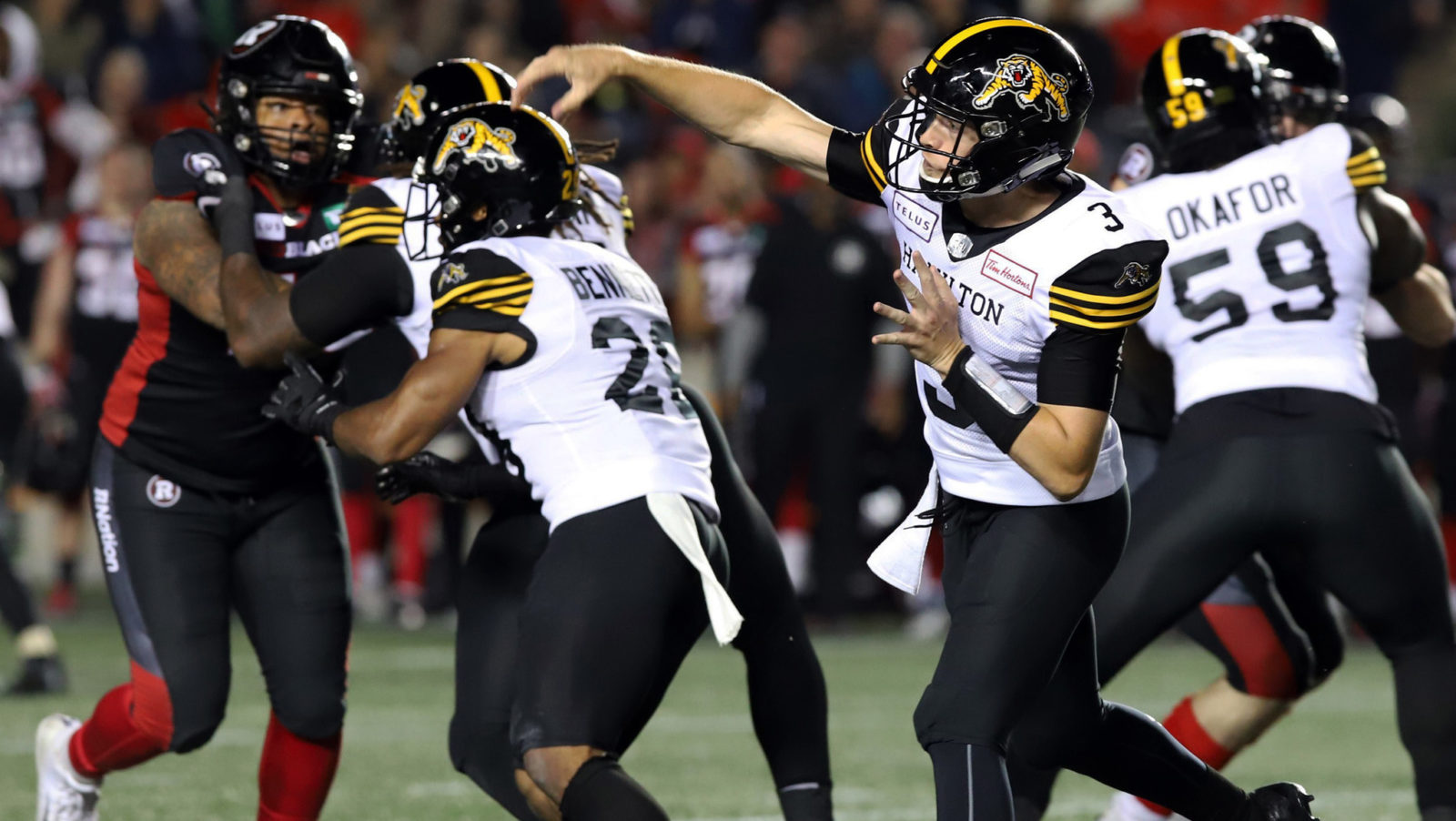 Landry’s 5 takeaways from the pre-season

Who says the only flavour you’re allowed to taste in tune-up games is vanilla?

THE STAMPS MAY JUST HAVE SOMETHING IN THAT NUMBER 40

The Calgary Stampeders have holes to fill in their defence, including in the linebacking corps.

Judging by Friday night’s game versus the Saskatchewan Roughriders, they may have found a suitable new guy to fly around back there, at the weakside linebacker position.

In his first game in the CFL, 24-year-old hopeful Nate Holley served notice that he deserves a legitimately long look.

He stuffed a Roughriders’ 3rd-and-goal attempt. He forced a fumble on another play. He showed speedy range and an ability to lower the boom on a number of occasions during his time on the field, with three defensive tackles and two more on special teams.

That has to have gotten the attention of Calgary’s braintrust.

Could Holley be the next wrecking ball for the defending champs? Time will tell, of course, but the native of Ottawa Lake, Michigan, sure looked the part on Friday night.

KID’S GOT A STRONG ARM, Y’ALL 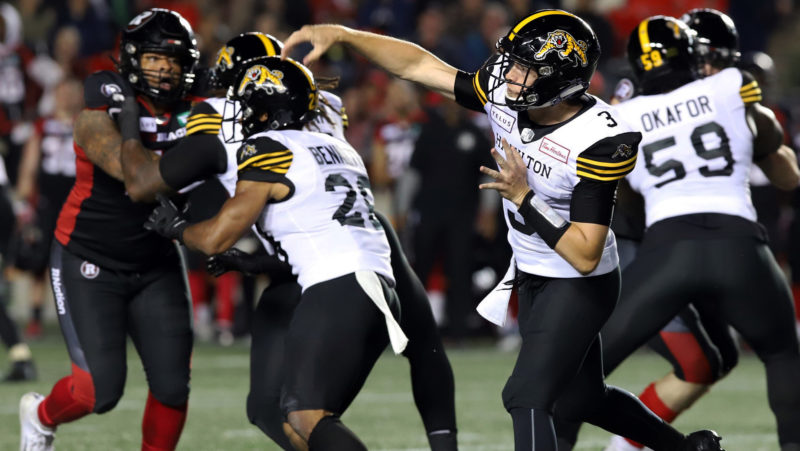 We already know that the Hamilton Ticats have a guy who can fling with authority in Jeremiah Masoli.

Looks like they’ve got another strong-armed slinger in the pipeline, too.

23-year-old Hayden Moore had the mustard flying during Hamilton’s 25-21 win over the REDBLACKS in Ottawa.

Roped a 17-yard TD pass in to his left, over near the pylon. Fired a rocket of a completion to his right, to move the sticks on a later drive, and followed it up with a bomb for a major, right into the over-the-shoulder basket of receiver Marcus Tucker, about 50 yards in the air.

Hayden Moore’s got some kinda fastball. We’ll see if he’s got the rest of what it takes to be a CFL starter sometime down the road. For now, all appearances are that the Ticats have a plum prospect on their hands.

MIKE REILLY SHOULD NOT BE ‘MIC’D UP’ FOR EVERYTHING, YOU KNOW

Hands up if “Total Eclipse of the Heart” is your go-to Karaoke song too 🙋🏾‍♂️@Rikester13 #CFL #CFLTC #KaraokeNight #NothingRhymesWithOrange pic.twitter.com/HUDDtmxvKr

Mike Reilly is good at everything, right? Throwing footballs, handling interviews with grace and appropriate smart-ass when called for and, of course, dressing splendidly with the best hat game in the entire world of pro sports.

It’s nice to hear him mic’d up during games, too, as we get some decent insight into what makes him tick as one of the great competitors in the CFL.

Do not – I repeat DO NOT – hand the BC Lions’ quarterback a microphone and ask him to lead the room in karaoke.

This past week, Reilly made an attempt to handle Bonnie Tyler’s mega-monster 80’s hit “Total Eclipse of the Heart.” That was… that was something. If you are brave enough, you can see and hear that by finding it on the Lions’ Twitter feed, but be forewarned: you may suffer the same fate as that Nazi in Raiders of the Lost Ark. You know the guy. He’s the one who thinks it’s a pretty good idea to look directly into the opened ark.

Maybe I’m biased because I personally sing the hell out of that song whenever it comes up on my 80’s shuffle while I’m driving in my car. I CRUSH that thing.

But I feel pretty solid in my critique, as that performance is legitimately awful. But here’s the other thing of which I feel certain: Mike Reilly absolutely won over all of his new teammates the moment he decided to take that microphone and give it his best shot.

Because anytime a football warrior of his magnitude decides he’s not too serious that he can’t have a little fun at his own expense, his teammates perk up. If the BC Lions win the Grey Cup this season, trace their successful journey all the way back to that flash in time where Mike Reilly screeched ”if you only hold me tight, we’ll be holding on forever.”

Turn around, bright eyes. Turn around. One vote for Total Eclipse being the BC Lions’ fight song this season. Don’t laugh. Look at what “Gloria” has done for the St. Louis Blues (um, Saturday night notwithstanding).

DOESN’T MATTER HOW YOU GOT HERE. ONLY MATTERS THAT YOU ARE

Looking to root for a guy whose football career may have been over after his university days, despite his wishes, only to find himself impressing and maybe winning a pro spot?

Undrafted. Signed only after the Blue Bombers suffered some training camp injury troubles among receivers.

And there he was, hauling in the game’s only touchdown pass in the Bombers’ 20-3 home win over Edmonton.

Did it in front of friends and family, too. Schrot was born in Winnipeg, played his uni ball with the Bisons. So he’s a homebrew product who made good when given the shot. Fully good. Made a terrific tackle on special teams during the game too. THAT is as much an attention-grabber for a head coach like Mike O’Shea as anything.

Let that be the lesson: Take a closer look. The door, appearing to be slammed tightly shut, may actually be open jussssst a sliver. Worth sneaking up on it for a closer look-see.

CHECKDOWN? I’M NOT SURE WHAT THAT MEANS

Shouldn’t come as a surprise, I suppose. With Corey Chamblin running things for the Toronto Argonauts, his personality, his preferences will trickle down to all aspects of the Argos’ game planning.

We know what kind of defence Chamblin prefers and that is one that is full of energy, peppered with a little chaos. A defence that’s like The Rock in the movie “Skyscraper.” Full speed along a girder, 50 stories above the ground and leaping from the odd crane, all with a facial expression that says “this is normal.”

He’s known as a defensive guru, having been the architect of a splendid, aggressive defence that more than did its part in leading the Argos to a Grey Cup championship in 2017. It’s clear from Toronto’s first pre-season game that Chamblin wants an offence that mirrors the personality of the defences he has adored, and that the conservative, check-down types of play-calling that were preferred by Marc Trestman and by Scott Milanovich before him, are out.

What is in question is how successful, exactly, the Argos will be in running schemes that are all-in on willful insistence.

A round of applause for Ottawa kicking prospect Jose Maltos, who chased down a bad snap, then used his left foot to dribble a pretty decent punt downfield as a swarm of Ticats gave chase.

Sometimes getting off on the right foot means you have to use the wrong one.