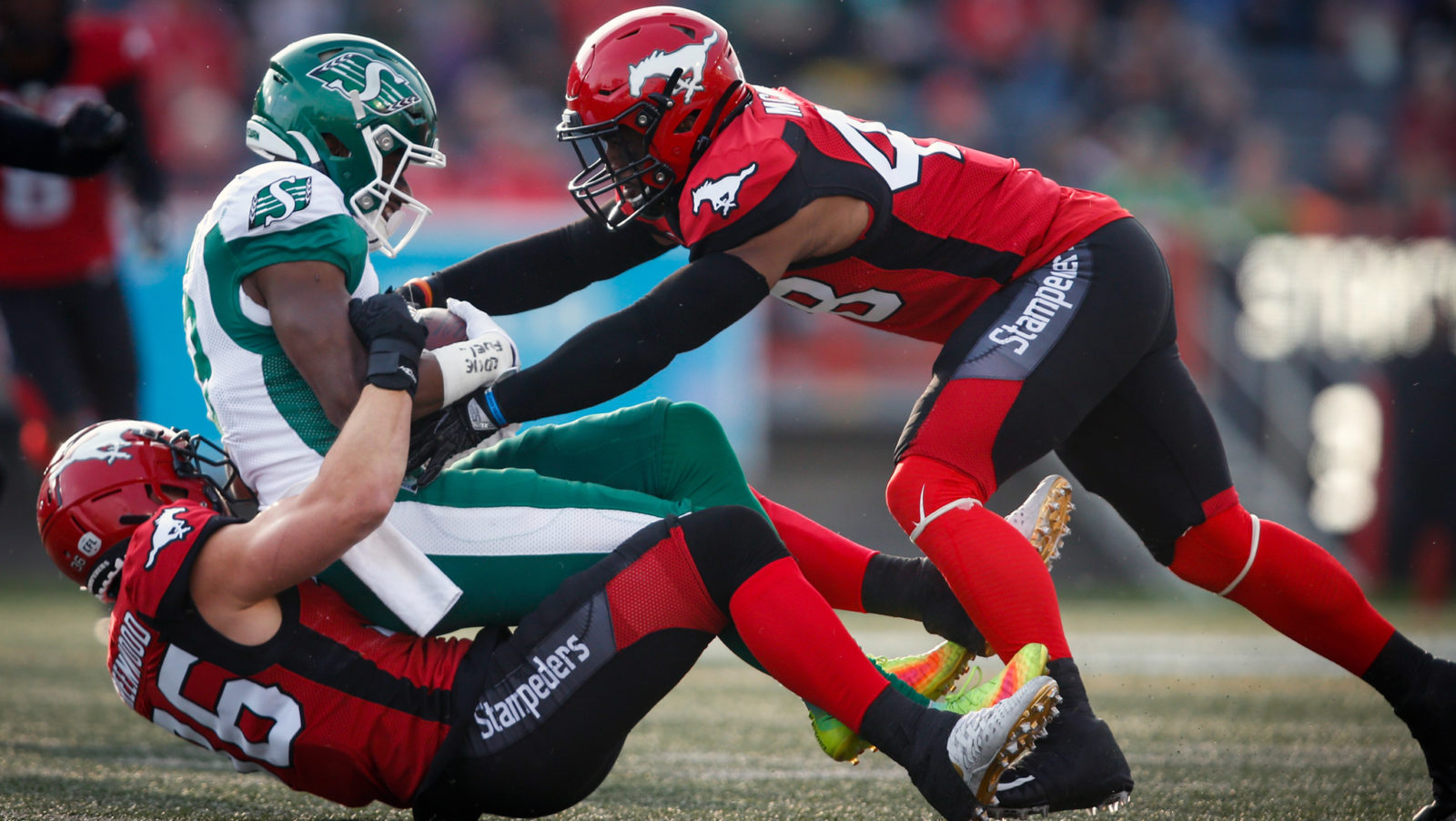 I get why there are some ready to proclaim 2019 as the year the Calgary Stampeders will finally take a step back. After all, no team lost as many big name defensive players over the off-season than the Stamps did.

Having watched this league over the last decade, though, no team has replenished talent on the fly better than Calgary without missing a beat. I’m willing to give them the benefit of the doubt for the coming season, too.

The Stamps opened the pre-season with a 37-1 win over Saskatchewan on Friday night, but that defensive display doesn’t factor into my thought process right now. The Riders played very few of their offensive starters, which makes the performance, while impressive, hard to truly evaluate. Instead, this comes down to a healthy respect for what Calgary has done since 2008 under John Hufnagel.

I get it; the Stamps have said goodbye to a wave of All-Star calibre players. Linebackers Alex Singleton and Jameer Thurman have left for the NFL. Defensive linemen Micah Johnson (Saskatchewan) and Ja’Gared Davis (Hamilton) signed elsewhere in free agency, as did lockdown corner Ciante Evans (Montreal). Finally, former defensive coordinator DeVone Claybrooks left to join the BC Lions as head coach. That’s an impressive roster to say goodbye to.

RELATED:
» Stamps’ defence dominates in win over Riders
» Fantasy: The Bo Show is back on the air in Calgary
» QB Tracker: Monitoring pre-season playing time

Let’s start with the departure of Claybrooks, because it’s not one Calgary was unprepared for. Claybrooks has been a hot coaching commodity for some time and almost left one year ago for Montreal; the Stamps knew they were on borrowed time with their defensive mastermind. That’s why they had a succession plan in place.

Claybrooks rose the coaching ranks rapidly because of his savant-level knowledge of the game and the people he learned under, like Hufnagel and Rich Stubler. The same is true with new defensive coordinator Brent Monson, who enters his 10th year with the organization. Also viewed as a football savant, Monson tutored under both Stubler and Claybrooks before getting this opportunity.

I’m not saying losing Claybrooks is a good thing, necessarily; instead, I’m highlighting how the Stampeders had a very deliberate plan in place for his eventual departure. It won’t shock me at all if Monson picks up right where Claybrooks left off, the same way the latter did when he took over for Stubler.

On the personnel side, I get how daunting the losses of all those high profile names looks. But again, it’s not like Calgary went into the winter blind from winning a Grey Cup. They knew Singleton was going to try his hand in the NFL. The Stamps also knew they likely couldn’t match the offers guys like Johnson, Davis, and others were going to get in free agency, especially if they were to keep quarterback Bo Levi Mitchell in the fold.

For 2019, Calgary is going to rely on an interesting mix of veterans, newcomers, and returnees with only slight CFL playing time. Up front, it’ll be fifth-year tackle Derek Wiggan and sixth-year end Cordarro Law leading the way.

After missing all of 2017 and most of 2018 with injury, Cory Greenwood enters the void left by Singleton. Replacing one of the best linebackers in recent memory is a tall task, but don’t forget how things were trending for the Kingston product prior to 2017; he had 70 tackles in 12 games with Toronto during the 2016 season. Greenwood has the potential to be a ratio-busting MIKE just like Singleton was. Paired with veteran Jamar Wall, I’d still be pretty comfortable with Calgary’s linebacker core. 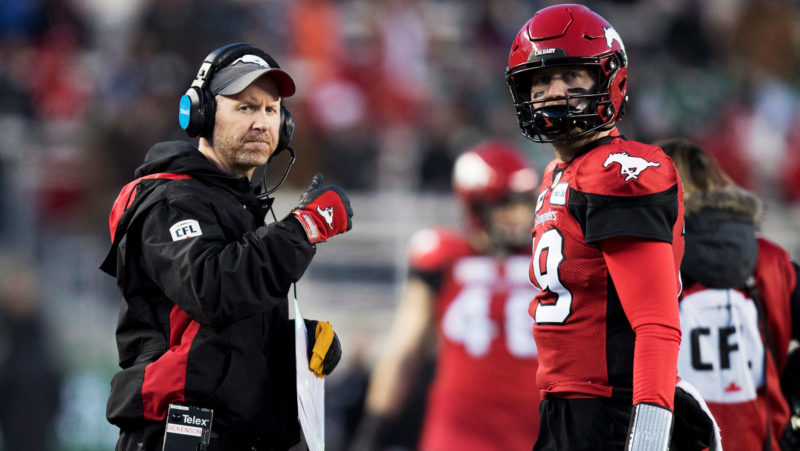 Look, I’m not trying to say the Stamps aren’t going to feel the losses they’ve sustained, because of course they will. I just don’t believe it’s going to be as noticeable on the field as it might seem. Remember what we knew about Singleton, Thurman, Johnson, and Davis when they entered the league? The answer to that question is very little.

Singleton was a surprise sixth overall selection in 2016. Thurman was a total unknown signed out of NCAA Division 1-AA (FCS) Indiana State. Johnson had bounced around practice rosters in the NFL before signing with the Stamps in 2013, much like Davis did before signing in 2016.

Knowing how things turned out for those four gentlemen, who’s to say the same can’t be true for others in 2019? Whether it’s Raheem Wilson, Wynton McManis, Mike Rose, or another name I haven’t mentioned, it shouldn’t shock you if Calgary is one of the league’s top defences once again this season. It’s kind of what they do.

The Ottawa REDBLACKS are the inverse of the Stampeders in a lot of ways, as they lost a veritable All-Star squad on the offensive side of the ball over the winter. Quarterback Trevor Harris, receivers Diontae Spencer and Greg Ellingson, tailback William Powell, left tackle SirVincent Rogers, and coordinator Jaime Elizondo are all gone.

That opens up all kinds of opportunity for different members of the REDBLACKS, but one name jumps off the page for me: Dominique Davis. The fourth-year quarterback has the best chance of his career to start games on a regular basis. I’m really intrigued to see what he does with it.

Ottawa played four quarterbacks in Saturday’s 25-21 pre-season loss to Hamilton, but it was Davis who led them in their first three offensive series. That gives you a decent idea of who head coach Rick Campbell has penciled in at the top of his quarterback depth chart right now, which means it’s on Davis to keep himself there.

No disrespect to Will Arndt or Danny Collins, but the battle to be the night one starter comes down to two men: Davis and Jonathon Jennings. The former is vying for his first professional starting gig, while the latter is trying to return to the form that saw him throw for over 5,200 yards in 2016.

The Jennings reclamation project is interesting, and I hope he succeeds if he gets a chance. Maybe it’s because I’ve seen Jennings start before, but Davis is the one that I’m really curious about. He brings an interesting and mixed skillset to the position, which I think has the potential to work well in this league.

There’s no denying how athletic Davis is, which is why the REDBLACKS used him in so many short yardage situations last year. It paid off, too; Davis finished last year with six rushing touchdowns in 2018. The guy can run like the wind and has the ability to throw on the run, which is always exciting.

But I also see a little more in Davis than just a purely athletic quarterback. While he only saw limited action on Saturday, I liked watching him work in the pocket and there were a few times he consciously stayed in as opposed to pulling the ball down to run. That showed a lot of maturity, as it’s easy to go back to something you’re comfortable with.

Davis has an explosive arm, which he can let loose in the pocket or on the run. At 6-foot-3, Davis also has an impressive frame that allows him to stand in and read the field longer than some. That size also gives Davis the freedom to take on some contact in open field. It’s an impressive and varied skill-set, but is also seems very raw still.

It’s not like Jennings doesn’t also boast a lot the same traits, but there are a few things going for Davis in this competition. I think he’s a little more dynamic on the run and, more importantly, doesn’t have the book written on him yet.

I’m not saying Jennings doesn’t have the chance to reclaim his career, but it has been a few years since he’s been a viable, accurate quarterback in this league. Davis, on the other hand, is still writing his story. It has been a frustrating off-season in Ottawa, but it has opened up a ton of opportunity on their roster.

If Davis seizes it, 2019 may yet have a happy ending for the REDBLACKS.