TORONTO — The Canadian Football League (CFL) announced that Athabasca University (AU) has partnered with the league to become the Official Education Partner of the CFL.

AU and the CFL have had a relationship for more than five years, working collaboratively with league affiliates, the Canadian Football League Players’ Association (CFLPA), and the Canadian Football League Alumni Association (CFLAA). These relationships have included CFLPA and CFLAA members taking over 60 AU courses to fulfill their post-secondary goals.

“We’ve had a long and rewarding relationship with the CFL and league affiliates. As a fully digital university, we’ve never had an official football team… until now,” affirms AU President, Dr. Neil Fassina. “Becoming the official education partner of the CFL enables us to align with an organization that is committed to expanding opportunities beyond the game for players and fans in Canada and around the world.” 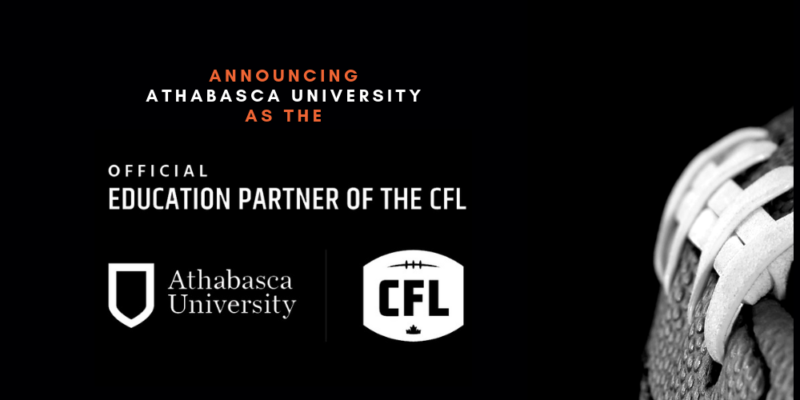 With the newly enhanced partnership, AU and the CFL will work together to deepen their connection through several fan-facing initiatives throughout the season, playoffs, and Grey Cup. Moving ‘Beyond the Game,’ the CFL and AU will create interactive and fun activities for players and fans alike, encouraging them to achieve their educational goals beyond the game.

“After working closely for several years, we’re excited to expand our partnership with Athabasca University and further integrate them into the fabric of our league,” says Tyler Mazereeuw, Chief Revenue and Marketing Officer. “CFL 2.0 is about reaching out to a world of opportunities. Athabasca University helps its learners do that by removing the barriers standing in the way of their education and their brightest future. We are proud to partner with them.”

Regardless of a person’s profession or where they are at in life, it’s important to look beyond what is happening right now. Whether it’s an online course or a program, AU empowers learners to realize their educational goals, beyond borders and barriers. As Canada’s only fully digital university (online) serving over 40,000 learners from coast-to-coast-to-coast, AU is committed to removing the barriers that prevent access to and success in university-level education. AU offers continuous enrolment with most undergraduate courses starting the ﬁrst of every month and with over 900 courses to choose from, wherever you are – you can take your course with you. Learn more about our programs and courses at AthabascaU.ca.

The 2019 season begins tomorrow when the Saskatchewan Roughriders face off against the Hamilton Tiger-Cats. Fans can stay up to date on all the non-stop action at CFL.ca, follow the 2019 season from around the world, and join us at a game. The 107th Grey Cup presented by Shaw will be played at McMahon Stadium in Calgary on Sunday, November 24.