Captain of the Ship: Chamblin earns new lease with Argos

Captain of the Ship: Chamblin earns new lease with Argos 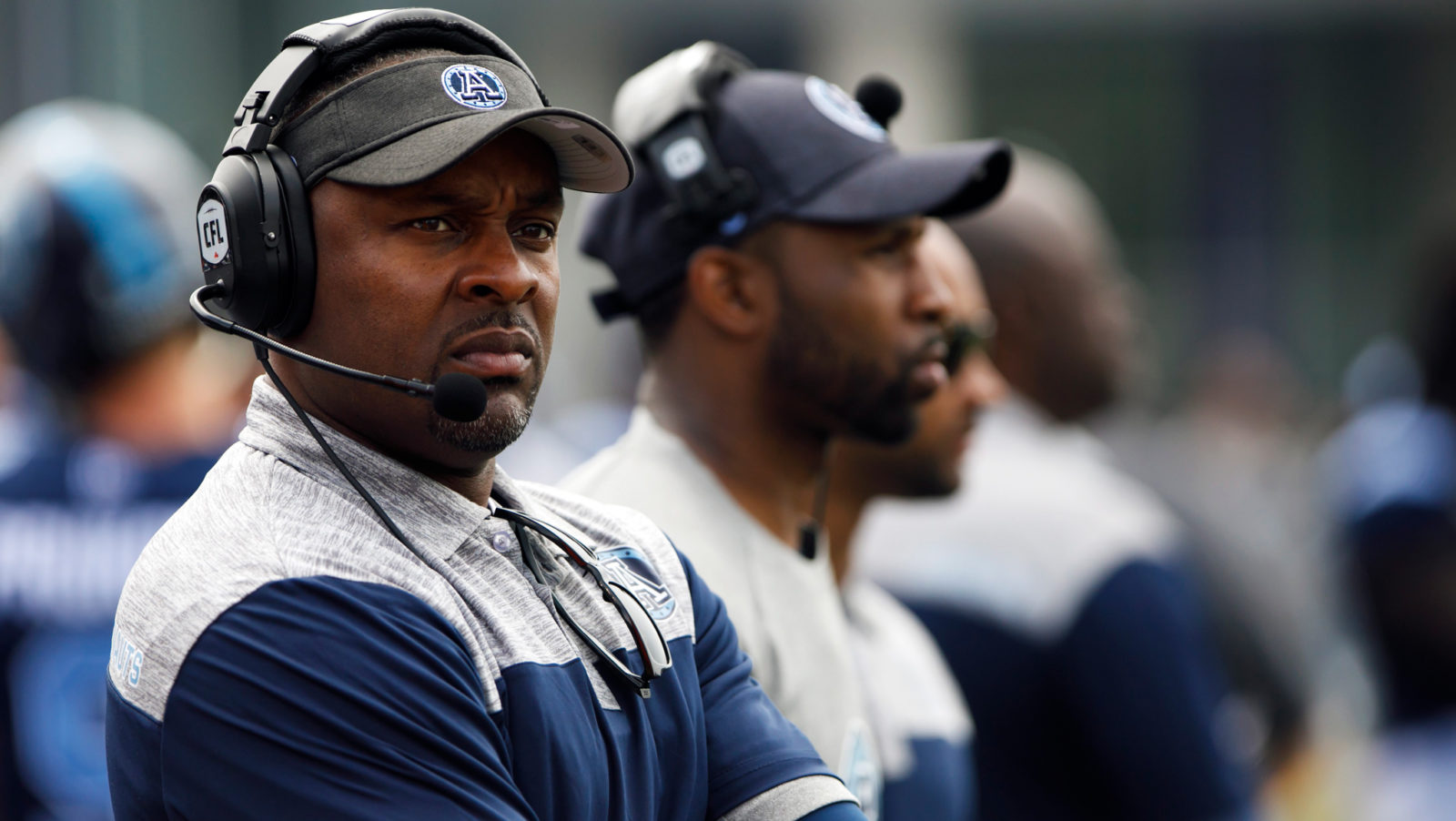 “I believe that experience he went through in Saskatchewan in 2015 has made him who he is today. It created a beast and I say that in the most positive way.”

“I know it was five minutes into the call because I basically cut the call off and I’m sure he was probably thinking ‘what the hell is wrong with him?’. We were talking about what’s your philosophy in building a team and how do you go about doing that successfully. And his answer to me was always geared toward what it’ll take to win a championship. I know every coach is going to say that but the way he delivered it was very clear, concise and he already had a plan and he knew how he’d execute it. He knew what he wanted and he knew what we had and he knew what we could make out of it with what was there and how to fix it if it wasn’t,” remembers Taman, who was the General Manager of the Roughriders in 2011 when he originally interviewed Chamblin.

The reason Taman cut off the call was to get in contact with Vice President of Football Operations, Ken Miller, to request an face to face interview with the three of them.

While Chamblin didn’t get the job that year. Taman finally got his man in 2012 when he got the final say on head coach.

Chamblin repaid the favour with a championship in just his second season in Saskatchewan.

Now, the Argonauts hope the same results are on the horizon for a coach they know well. Chamblin was the defensive coordinator in 2017 for the Argonauts championship.

He’s back after a year at the University of Arkansas.

However his first go around as a head coach was as notable for the win in 2013 as it was for two wins in 18 games, including a 0-9 start to 2015. A start that got him fired by Labour Day.

While Chamblin’s record in 2014/15 could be as much on Darian Durant‘s injuries as they are on the head coach of record for one of the worst spells of football we’ve seen in quite some time.

Taman remembers watching Chamblin start to feel the pressure as the losses mounted and definitely saw a positive and driven coach being crushed by the pressure Rider Nation can put on a head coach.

“I think the pressure that comes with losing escalated and so to did the pressure of possibly not having a job. I saw him address the team in ways that were not characteristic of Corey. After a game in Edmonton, he really got quite emotional and heated at me, the team, the coaches and everybody. And that wasn’t the guy I hired. I always was impressed how calm, relaxed and well tempered he was after wins and losses. He rarely snapped, so to speak, so seeing him get that emotional was completely out of character.”

One other thing Taman acknowledged is some in Saskatchewan may not have taken to the way Chamblin did his business, rubbing some the wrong way. But Taman believes that was due to the expectations Chamblin had for himself to try and doing everything possible to do them and the pressure of it all turned things sour for him in Saskatchewan.

But it’s those expectations why defensive backs coach Tyron Brackenridge is happy Chamblin has returned to the Argonauts. 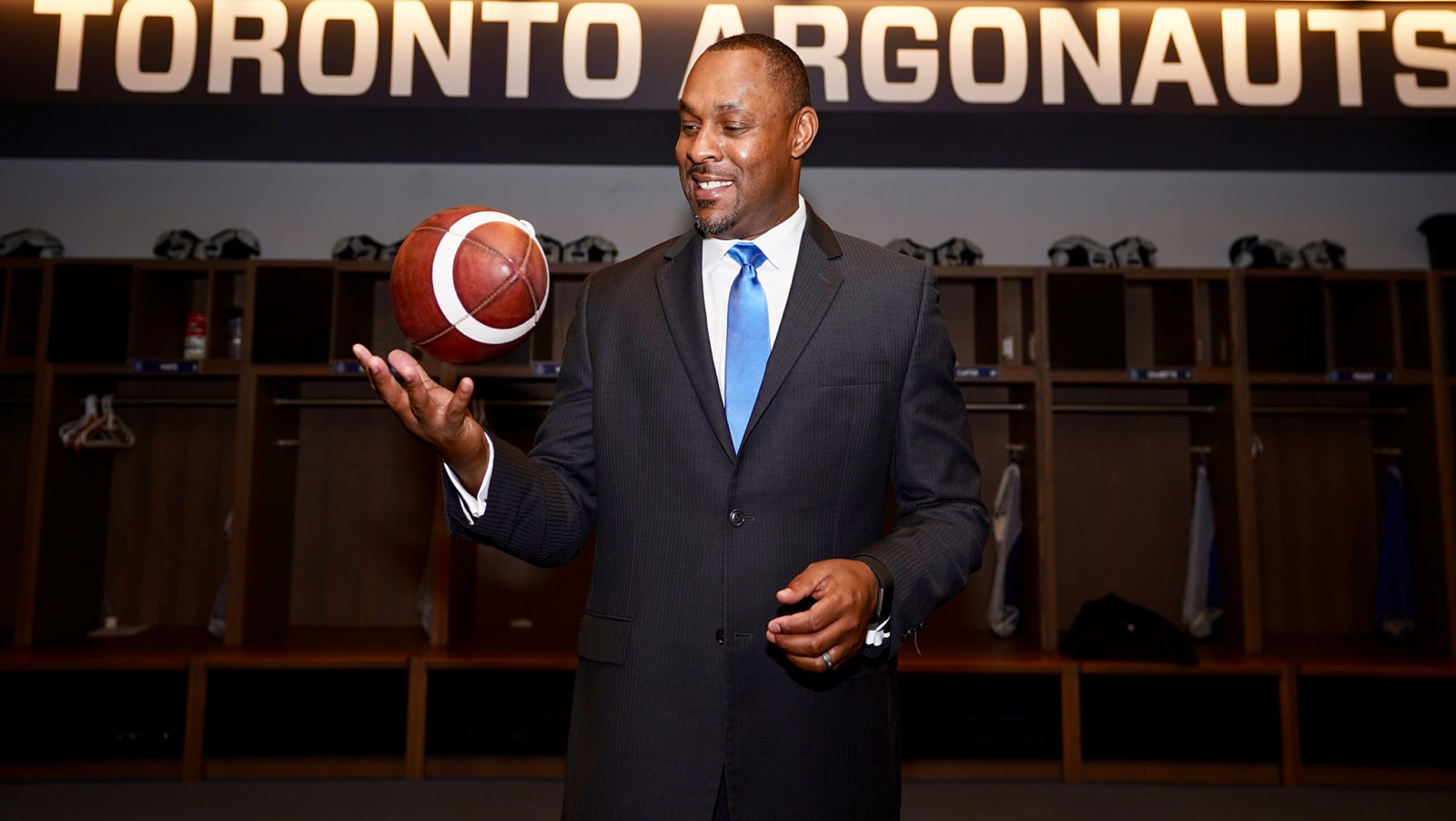 Chamblin returns to the Argonauts as a head coach this time around (Argonauts.ca)

“A lot of people who truly don’t know him can look at it as him being egotistical or cocky or arrogant or whatever but when you get to know him, you get to know he’s a great dude and definitely has a winning mindset. You want someone in a position of leadership who wants to win and has the vision and they’re going to be stern and be that go-getter mentality. He just has an aggressive mindset and he’s an aggressive person and there’s not a lot of people who can handle that.”

Brackenridge, who also played for Chamblin in Saskatchewan, adds that the proof is to the lasting relationships Chamblin has built with the players over his 12 years since coming to Canada.

It’s that passion for teaching that Taman believes makes Chamblin special, and it was apparent the first time Taman watching him coach in his first go around with the Winnipeg Blue Bombers ahead of the 2007 season.

“My first interaction with Corey was down in a free agent camp in Georgia. Corey came to help out and he really impressed me right then and there with his teaching and his energy and just the way the guys responded to him. He always told me he loved teaching young people.”

Brackenridge, despite having NFL experience, was one of those players that Chamblin helped groom to an excellent defensive back in the CFL and was also grooming him to be a coach.

“He’d tell me I’d coach someday and I kind of shrugged it off. He tells me now I’m going to be him someday and he helps me grow as a coach and gets me ready for the next stage of my coaching career.”

But when push comes to shove, Chamblin knows only one thing matters in football and that is winning. And after his first coaching job ended with a winless start to the 2015 season, Brackenridge sees a motivated head coach.

“I believe that experience he went through in Saskatchewan in 2015 has made him who he is today. It created a beast and I say that in the most positive way.”

“I would think he’s very very motivated to prove he’s still a very good head coach and that 2013 was much to do with his abilities as a head coach. I’m sure he wants to win now more than ever.”