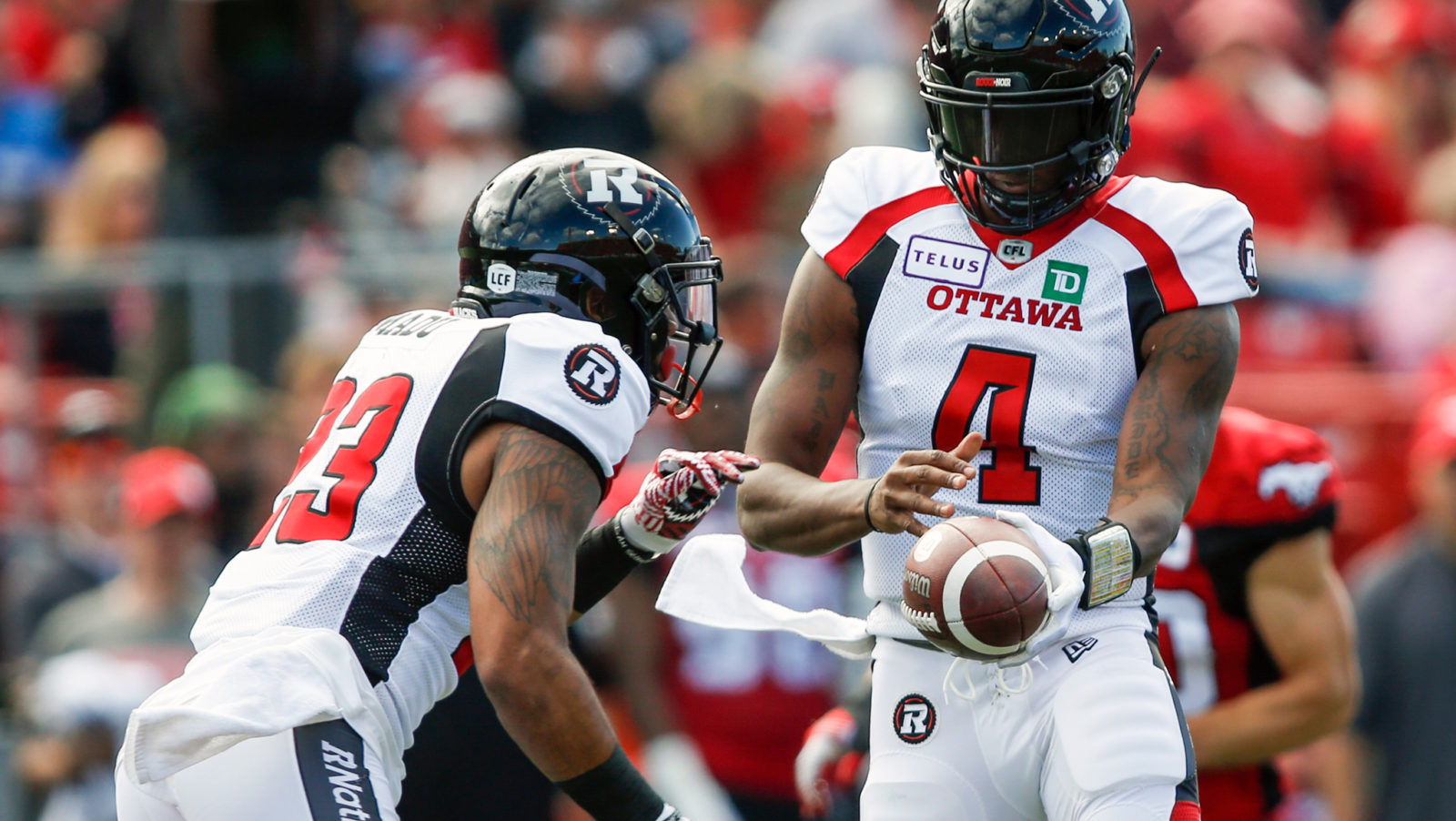 CALGARY — Dominique Davis‘ first start of 2019 was a lesson in perseverance.

Davis made his first start on Saturday since replacing Trevor Harris, who left in free agency to join the Edmonton Eskimos — and at times, things didn’t go particularly well for the 29-year-old.

But after throwing four interceptions, Davis scored his third rushing touchdown with 1:22 remaining, leading the Ottawa REDBLACKS to a stunning 32-28 come-from-behind win over the Calgary Stampeders.

It was the REDBLACKS’ first win at McMahon Stadium since entering the league in 2014.

“Definitely not the way I want to play, but I just kept plugging away,” said Davis. “My teammates had my back through it all. It’s hard to get wins in this league.”

“It’s big that he can hang in there,” added Head Coach Rick Campbell in his sixth season at the helm. “He has those traits where he’s going to hang in there and fight with his team’ til the end so that’s good on him.

“Interceptions happen for different reasons, but the most important thing is we were able to overcome it and win the game.”

Three of Davis’ four interceptions came from Tre Roberson, the Stampeders’ sophomore corner who was one of the league’s top rookies in 2018. Two of them came in the first half, while Bo Levi Mitchell threw a 50-yard touchdown pass to Juwan Brescacin to give the Stampeders a 15-point lead early on.

In the second half, however, Ottawa’s defence rallied, shutting out one of the CFL’s most vaunted downfield passing attacks. Calgary’s only second half points came via a pick-six by Brandon Smith, a tip off the hands of RJ Harris.

As the two defences continued to clamp down, Davis was able to convert on a late drive that started at the Calgary 47-yard-line. He finished the game with 276 yards on 29-of-44 passing, to go with 10 yards and three touchdowns on five rushing attempts.

For Davis, whose CFL career began with Calgary in 2015, a short memory proved to be the difference.

“I kept telling them I’m going to get it back,” Davis said of the interceptions. “Every time I turned it over we did a good job of responding, I’m just happy we came out with the W. It’s a great confidence booster for us.”

The early-season victory may come as a surprise for some around the CFL. The REDBLACKS were riddled by losses over the winter, with several of their top offensive stars leaving the team through free agency.

Before the season, national safety Antonie Pruneau said he felt the team wasn’t getting enough respect — despite appearing in three Grey Cups over the last four years.

On Saturday, in a rematch of the 106th Grey Cup presented by Shaw which saw Ottawa fall 27-16, the REDBLACKS let their play do the talking.

“We keep everything in-house and we stick together,” said Davis. “There are a lot of people out there that doubt us, but we don’t listen to the outside stuff, we just worry about what’s in-house.”

“I said I liked this group,” said Campbell. “They have a good spirit and character about them and it’s easy to hang your head when a play goes against you, but they hung in there and kept fighting and found a way to get it done.”

Mossis Madu, replacing the departed William Powell, had a game-high 112 yards, while Harris and Brad Sinopoli chipped in with six and seven catches respectively.

Lewis Ward made all three of his field goal attempts, including his 50th successful attempt in a row dating back to last season.

Ottawa started five Canadian offensive linemen in Week 1, with 2018 first round pick Mark Korte getting the assignment at left tackle.

The REDBLACKS’ next test comes in a matter of days, against the Saskatchewan Roughriders on Thursday night in the nation’s capital. Despite holding the Stampeders to just 299 yards of offence and controlling the football for more than 33 minutes, Campbell says there’s plenty to clean up before then.

“The bad news is that wasn’t our best game. The good news is we have a lot of room to grow.”