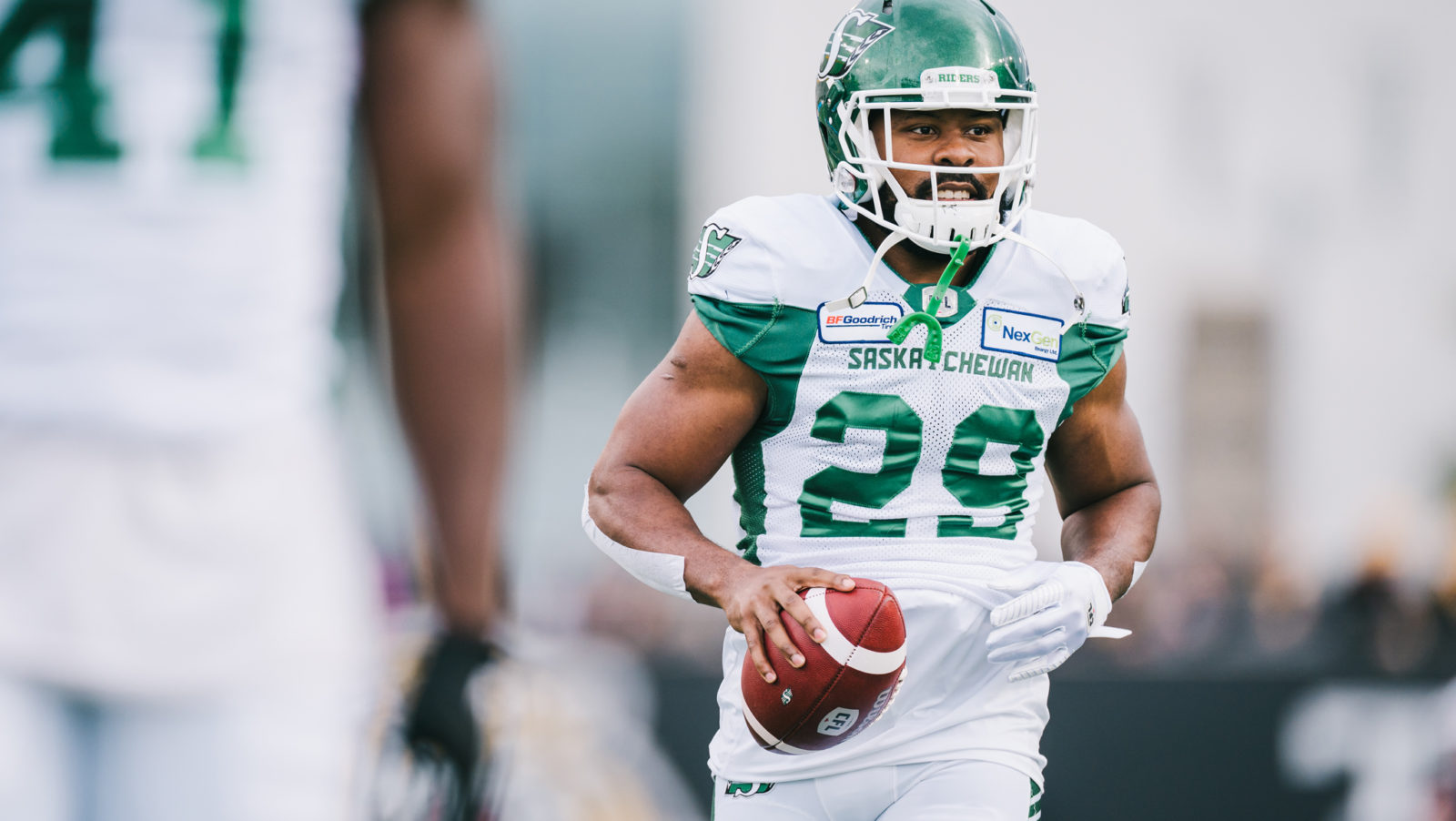 YOU WERE WONDERING IF THEY’D LOST A STEP IN THE OFF-SEASON? NO. NO, THEY DID NOT

We ask the question when veteran running backs get up there in football age, approaching and surpassing the 30-year-old mark. After all, a running back takes a ton of physical punishment as a younger man, often leading to a shorter pro shelf life.

After Week 1, any questions you may have had about guys like C.J. Gable, Mossis Madu, Andrew Harris or William Powell have to be put on hold, at least for now, and likely for the rest of the season.

Because veteran running backs really ruled the roost over the weekend.

Fresh, all of them were, from an off-season of resting, healing, and conditioning. Each of them looked sensational in their openers, showing full well that they can be counted on in 2019, at least when they are feeling tip top.

It will be up to the Riders, Esks, REDBLACKS and Bombers to keep them feeling that way, and you can bet that the sports world’s newest chestnut, “load management,” will be a well-worn phrase throughout this season.

“Gee, I wonder how Trevor Harris will do in trying to replace Mike Reilly.”

Fair statement, that was, after the 33-year-old veteran signed with Edmonton during the off-season after Reilly loaded the Family Truckster and wheeled west to BC.

Game one indicators are that the Eskies have replaced their team leader of the previous six seasons with a guy fully capable of keeping the beat going, which does not qualify as any kind of shocker, considering Harris’ numbers while with Ottawa last season.

Still, there have been those who’ve stubbornly clung to the “yeah, but” philosophy when it comes to Harris. But 447 yards in passing, with three touchdown strikes and zero interceptions – spreading the ball around to seven different receivers – clearly shows that Trevor Harris doesn’t need to try to fill Mike Reilly‘s shoes. He just needs to fill the ones he brought with him.

BONUS TAKEAWAY: Did I hear correctly? Did Trevor Harris take tap dancing lessons in the off-season to improve his footwork? Oh, I can’t wait to see that video this week on TSN. Think I’ll call him Trevor “Flea Hop” Harris from now on. Not as good as the Drew “Wol-Guitarsky” thing. I’ll do better with Tre Roberson at the end of this column. You’ll see.

LOOKS LIKE THOSE TRAINING CAMP REPORTS WERE BANG ON

I did not get to see a whole lot of the Saskatchewan Roughriders during the pre-season, but whenever I read up on them, a new guy’s name seemed to pop up pretty regularly.

Showing a strong arm with a quick-flipping wrist whenever a compact delivery was necessary due to a collapsing pocket, Harker gave great indications for great expectations.

And, yeah, you might merely look at his stats and say “but he threw two interceptions and only completed 57% of his passes.”

True that, but not the whole story, as those interceptions were thrown very late in the game, both of them in “well, this ain’t perfect but I absolutely have to chuck it and hope for the best” situations.

The numbers look like one thing. The game film looks like something else. No one should, as yet, go ahead and anoint Isaac Harker as the Next One, but that first test sample indicates there might be some gold there.

BONUS TAKEAWAY: There’s such a thing as the Colorado School of Mines? And they have a football program? Huh. Go Orediggers!

GO AHEAD AND CONSIDER HIM A KICK RETURNER

Brandon Rutley is a power back, no? That’s it, right?

Through his first six seasons in the CFL, we got used to seeing him show some decently sweet feet coming out of the backfield, but what we primarily knew about him was that he could truck defenders and power his way to the forward yard marker.

Prior to Saturday night’s game against Winnipeg, the 30-year-old had hauled back a grand total of zero punts during his career, and just 22 kick-offs (19 of those in his rookie year in Hamilton in 2012).

While his punt return numbers from Saturday night were nothing special (4 for 17 yards), his kick return numbers – and style – showed that Rutley can carry the mail in more ways than one. On five of his kick-off returns he averaged 23 yards per, which is strong. But it was the other one of the six that really displayed his abilities as he dipped, dodged and raced his way to a 108-yard touchdown.

If he continues to amaze, I’ll be forced to come up with a cool returner nickname for him. Open to suggestions, but right now I’m leaning towards “A-Brandon All Hope of Stopping Him” Rutley.

The REDBLACKS’ quarterback threw an interception on his first pass of the season, and it led to the Calgary Stampeders taking a 7-nothing lead midway through the first quarter.

The next time he touched the ball, Davis drove the REDBLACKS 86 yards for a touchdown, going 5-for-5 in passing, for 59 yards.

That was a very good sign for Ottawa, seeing their new QB1 shake off a costly pick and march confidently down the field.

Davis kept on doing that. And by that, I mean kept on throwing interceptions and then acting as though he had no memory of the recent event.

It’s good that Davis can shake off the bad stuff and put mistakes so far in the rearview that they barely register as specks. Quarterbacks get very shaky when they’re haunted.

However, in order to really take steps as a bona fide number one, Davis is going to need to show that he doesn’t have to display his ability to “park it” quite so often as he did on Saturday night.