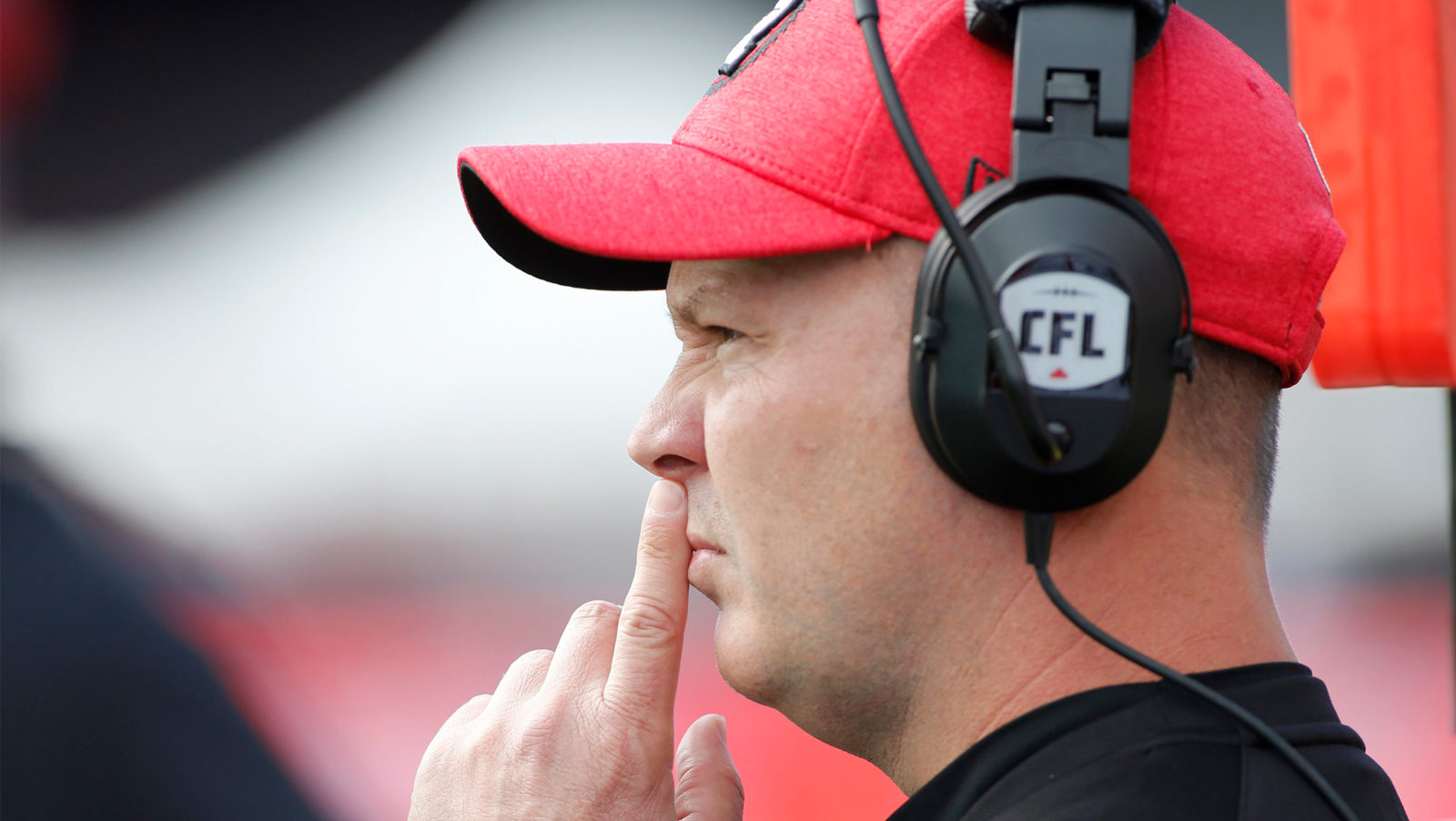 A quartet of entertaining games kicked off the 2019 CFL season on the weekend, with a couple toss-ups proving difficult to predict and one good-sized upset rocking the boat for a number of #TotalPickEm players.

The Ticats did enough to pull out a grinding victory in the season opener, but it wasn’t the prettiest of wins.

Saskatchewan QB Zach Collaros was injured less than two minutes into Thursday’s contest, and subsequently placed on the six-game injured list after a controversial hit from Simoni Lawrence. 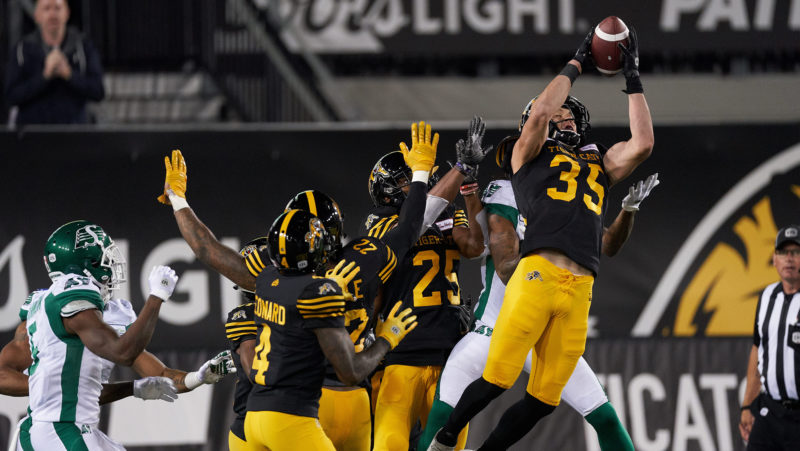 It remains to be seen whether fourth-year vet Cody Fajardo or rookie Isaac Harker will be handed the reins of the Riders offence; either way, this is a Saskatchewan team that will likely be starved for points early in the season.

Orlondo Steinauer’s Ticats came out with some thumping tackles — it will be interesting to see if they start in the same brash fashion in Week 2 at Toronto.

PICK: Wrong. Collaros’s first-quarter injury didn’t help, but it looks like the 2019 edition of the Riders will be a grind-it-out kind of team similar to last year. Ticats did just enough to earn the victory.

Trevor Harris threw for 447 pass yards and a trio of touchdowns en route to a win in his Esks debut, but the Montreal Alouettes did not go quickly into the Alberta night.

Vernon Adams Jr. was 7-of-10 for 134 yards in relief for Khari Jones’s Als, who showed more mettle in the second half on Friday than they did at any point in last season’s 13 losses. 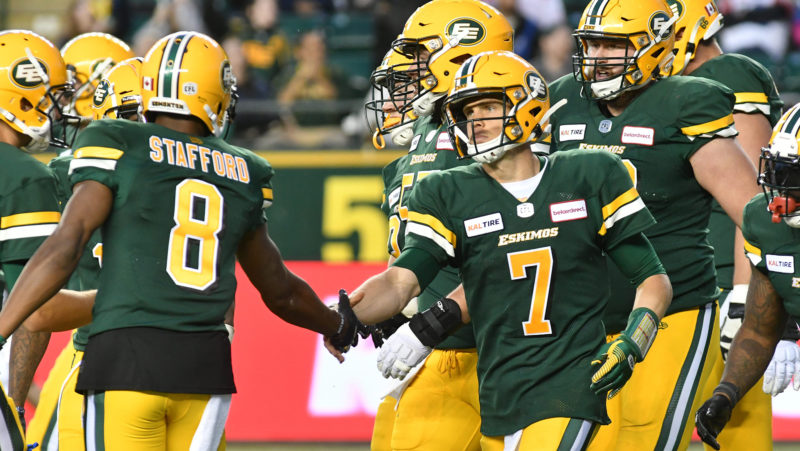 Trevor Harris stole the show with a 447-yard performance in his Edmonton debut. (CFL.ca Photo/Walter Tychnowicz)

The Esks will have some things to clean up defensively ahead of a Week 2 meeting with former franchise QB Mike Reilly and his new BC squad, but Jason Maas’s team showed it’ll be able to move the ball in 2019.

PICK: Correct. Despite an Adams-led surge late, Edmonton hung on for the win thanks to signature performances from Harris and RB C.J. Gable. Stay tuned on the Esks.

Throughout last week, we heard all about how the Ottawa REDBLACKS lost too many pieces. That sans Harris, Powell, Ellingson, Spencer, etc., that Rick Campbell’s team simply wouldn’t be able to overcome the turnover and was destined for a last- or second-last place finish in the East Division this year.

Then, they went to Calgary and became the first road team to beat the Stamps pre-Labour Day since August 2014. Despite newly-appointed starter Dominique Davis throwing four INTs. 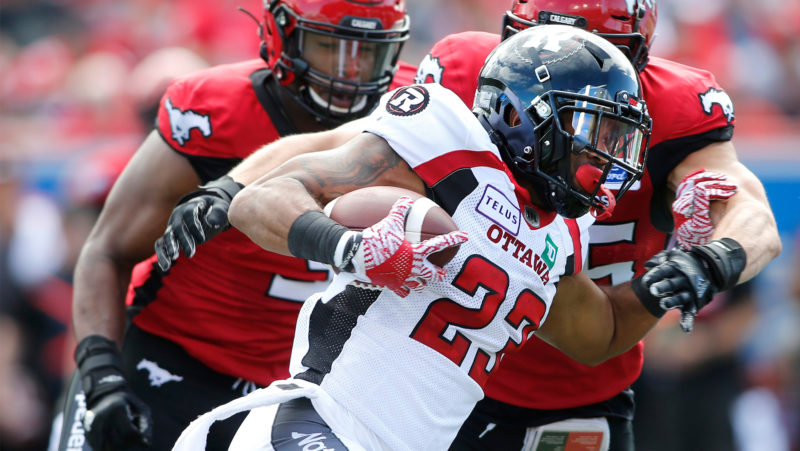 RB Mossis Madu Jr. was a revelation, racking up 140 all-purpose yards for the REDBLACKS on Saturday. (CFL.ca Photo/Larry MacDougal)

There’s something to be said for continuity in the front office and on the coaching staff, and the REDBLACKS have it.

Meanwhile, the same questions asked of Ottawa should now be turned to Calgary; Saturday’s was an uncharacteristic loss for Dave Dickenson’s Stamps, who hadn’t allowed 30 points at home since Oct. 2017.

PICK: Wrong. Like many, we doubted the REDBLACKS. Also like many, we won’t be so quick to write them off again.

If the REDBLACKS can point to continuity as a strength, the Bombers can call it straight-up power.

QB Matt Nichols looked a renewed man under centre, with improved footwork and accuracy in a 10-point road win at BC, while RB Andrew Harris shows no signs of slowing down despite being well into his 30s.

Could this finally be the Bombers year, or were the Lions potentially over-hyped in pre-season with their shiny free-agent acquisitions?

We’ll wait a few more weeks before making a definitive call, but BC’s visit to Edmonton next week could be very telling.

PICK: Correct. The Bombers’ continuity and weapons on offence are undeniable, while Richie Hall’s defence made Mike Reilly — granted, yet to find chemistry with his new team — look average.