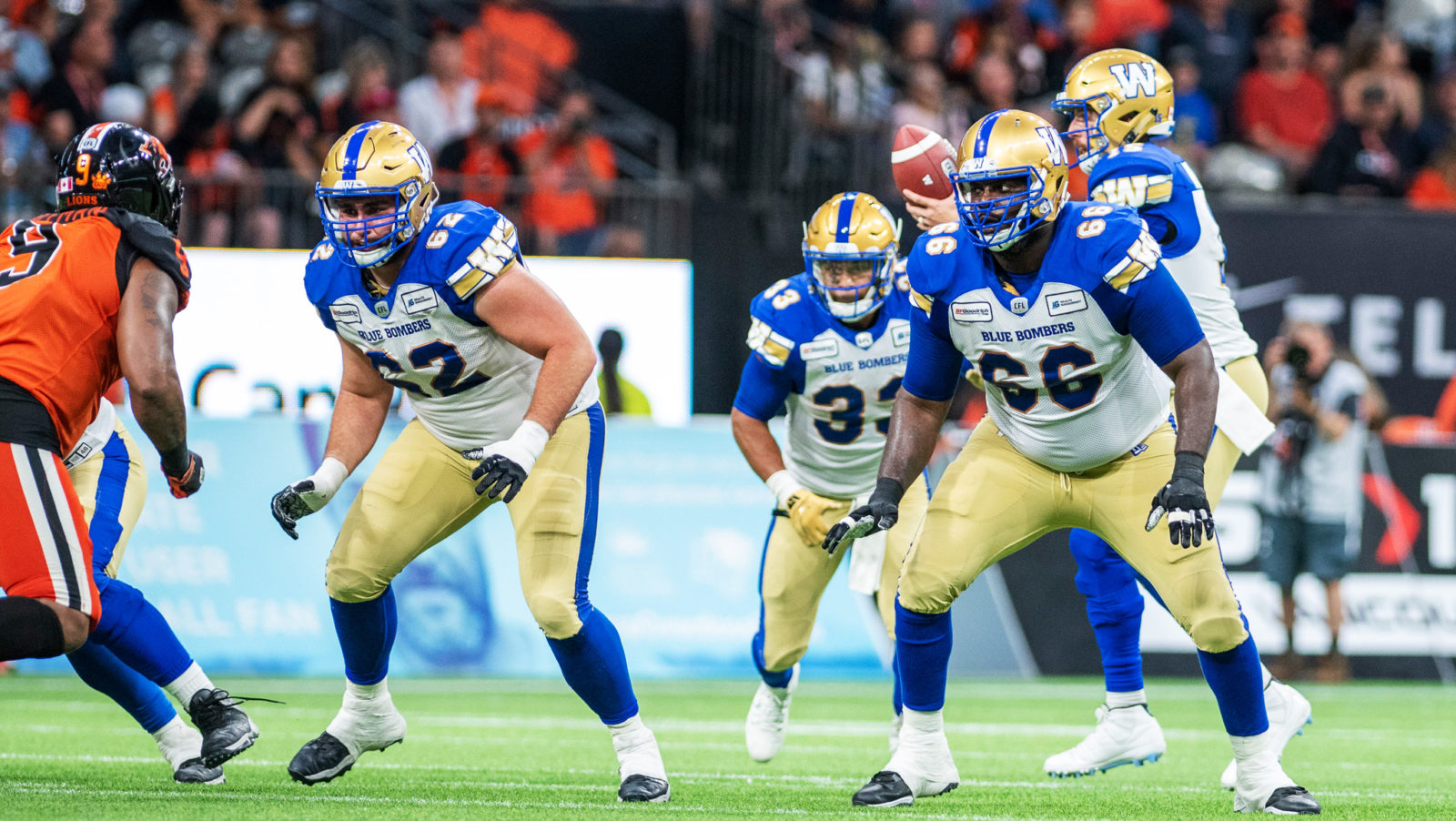 Matt Nichols had heard the talk.

Depleted by defections and retirement, there had been questions if the Winnipeg Blue Bombers offensive line would be the dominate unit it had been over the last few CFL seasons.

The Bombers’ quarterback believes those questions were answered in Winnipeg’s 33-23 road victory over the BC Lions Friday night.

“Incredible,” said Nichols. “I look forward to seeing that group grow and continue to get better.”

Running back Andrew Harris, who romped for 148 yards on 16 carries, was equally as enthusiastic.

“The offensive line handled what BC was bringing in the blitz game and the run game,” said Harris, who also had five catches for 27 yards. “There were some nice holes for me early on and near the end of the game.”

The Winnipeg offensive line had earned the reputation as one of the best in the CFL. Anchored by Stanley Bryant, the league’s top offensive lineman the last two seasons, the group was big, mobile and physical.  A lack of injury also gave the line consistency.

The winds of change blew through Winnipeg over the winter. Veteran guard Sukh Chungh signed as a free agent with BC and centre Matthias Goossen retired. The Bombers were forced to open the season with Patrick Neufeld, an eight-year veteran, on the one-game injured list.

Against the Lions, Bryant and veteran Jermarcus Hardrick started at the tackles. Michael Couture, a 2016 draft pick who started two games for Winnipeg last year, started his first regular-season game at centre. The guards were Cody Speller, an undrafted free agent who appeared in two games last year, and Geoff Gray, a 2017 draft pick who spent time in the NFL before playing one game for Winnipeg in 2018.

Facing a Lions’ front four that featured Odell Willis, who had 11 sacks last year, and Davon Coleman, who had 57 tackles, the Winnipeg line played with poise and confidence.  They opened up big holes for Harris and gave Nichols the time to compete 21 of 33 passes for 184 yards and three touchdowns.

Winnipeg generated 348 yards net offence and averaged 7.33 yards on first downs.  The Bombers gave up two sacks and were called for just one holding penalty.

Nichols praised the play of Speller, Couture and Gray.

“The veteran guys at the tackles they are the best in the business, you never have to worry about them,” he said. “Those guys in the middle showed they belonged.

“They were hungry. They just needed an opportunity and they proved they can play some football.”

Couture, a six-foot-four, 303-pound native of Burnaby, B.C., admitted he felt some nerves the night before the game.

“I think that’s natural,” said the 25-year-old who played his college football at Simon Fraser. “I feel like if I’m not nervous a bit before a game something is wrong.

“Throughout camp all my reps were at centre so my confidence level is as high as it’s ever been. I went out there and made all the calls.”

Hardrick said the new starters all spent time with the team last year, allowing them to become familiar with the system and plays.

“It was just a matter of them getting the reps,” said the six-foot-five, 319-pound Nebraska product who was a 2017 West Division All-Star. “I think training camp and pre-season helped them out.

“I don’t think we fell off any. We definitely miss the guys that are gone but I think we are ready.”

Bryant said the offensive line worked hard in training camp and the pre-season games to mesh.

“Those guys came in, all through camp, we worked it out, communicated and they just responded with the mentality we always bring,” he said. 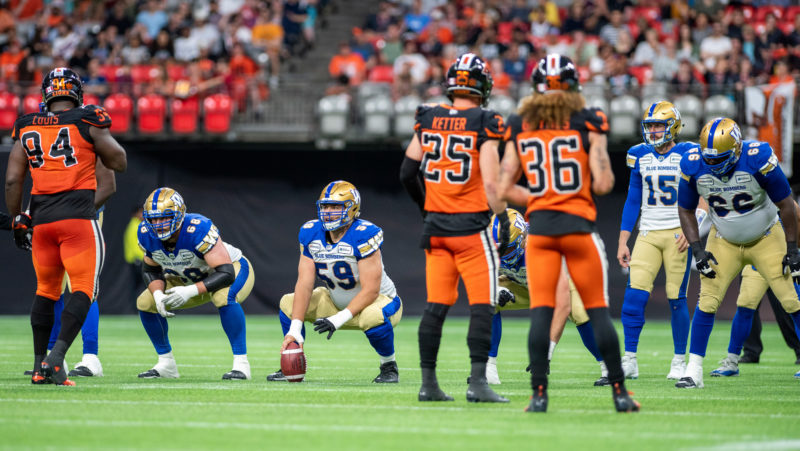 Michael Couture get set to snap the ball to Matt Nichols against the Lions at BC Place (Jimmy Jeong/CFL.ca)

Bomber coach Mike O’Shea is excited about the line’s potential.

“There is going to be points in the game where it didn’t maybe go exactly as you drew it up,” he said. “You knew those guys would scrap in there. They are a scrappy group, they are smart. They’ll play hard.

“They’re a physical O-line,” said the Lions rookie head coach. “You’ve got to give credit where credit is due.

Couture said after dealing with some doubts the offensive line had a positive start to the season.

“Throughout camp there was some growing pains,” he said. “We came out there and I think we moulded really well. Our communication was very high.

“I think we brought the same physicality that we always have. It was a lot of fun.”

Neufeld is expected back in the lineup when the Bombers host the Edmonton Eskimos on June 27. That will result in some shifting alone the line.

While impressed by the opening game Bryant said there is still plenty of room for improvement.

“It’s only week one,” he said. “I tell the guys it’s a marathon not a sprint.

“Each and every game, each and every practice, we’ve got to get better. It may be technique, it may be any small like thing we can fix and work on.”