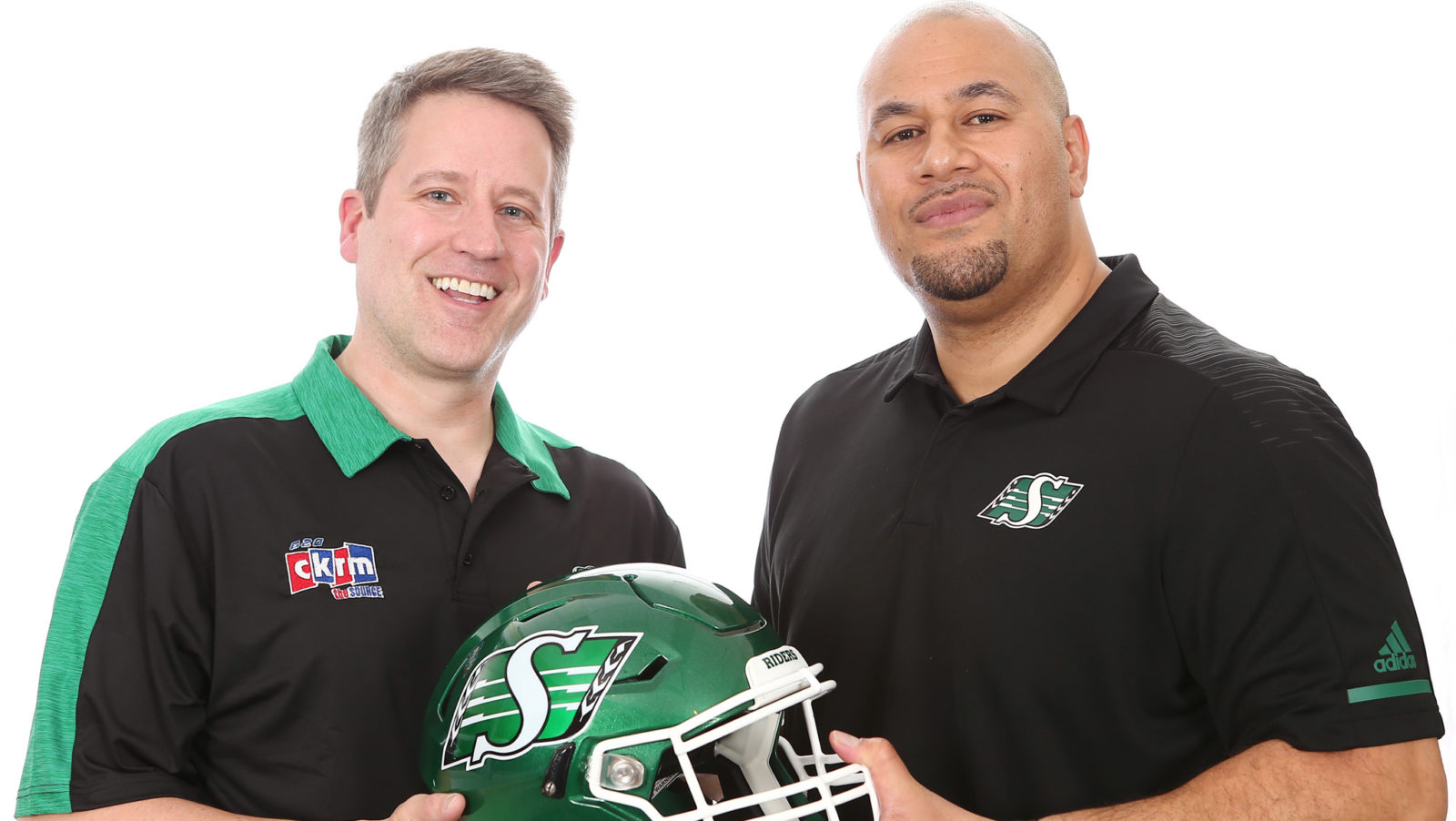 It’s been a smooth transition to a new job, a new city and a new life for Derek Taylor, but there are still moments where the magnitude of what he does now hits him.

“A guy came to our house to fix our stove,” Taylor said on Thursday night, while he surveyed the dark clouds that loomed over east Hamilton and Tim Horton’s Field.

“He didn’t recognize (my name) from the work order but when he saw me he recognized me. ‘Oh you’re the Riders guy.’

“We ended up talking for an extra half hour about the Riders. This is a five-minute job to look at my stove and it took 35 minutes.”

He started to laugh again.

“I thought, ‘This is all right. This is pretty good.’” 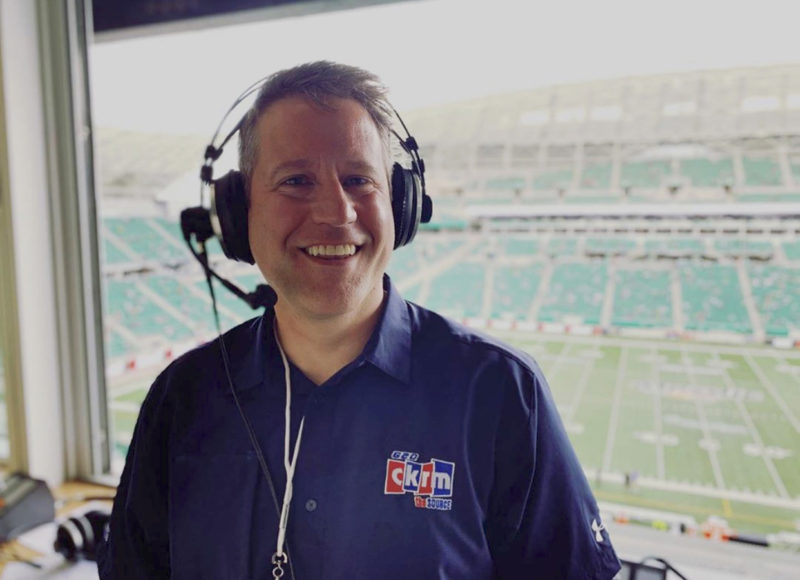 Taylor gets set to call his first home game as the Riders play-by-play voice at Mosaic Stadium (Photo: Derek Taylor)

The nerves were gone, Taylor said, about working his first regular-season game as the voice of the Saskatchewan Roughriders. Hired by radio station CKRM in March, Taylor said the pre-season was helpful for him. He was able to work out a few broadcasting bugs with his colour man, Luc Mullinder and got comfortable with his surroundings.

On Thursday, he and Mullinder would casually tell their listeners they were somewhere between one and six miles up in their booth in Hamilton. It provides one of the most distinct views in the CFL, but it’s a challenge for broadcasters that have to tell their listeners what they’re seeing.

And then there was the action on the field. The Riders lost their starting quarterback, Zach Collaros, on the fourth play of the game on a dirty hit from Hamilton’s Simoni Lawrence, which drew a 25-yard penalty. After undergoing concussion protocol, Collaros spent the night on the sideline.

It probably wasn’t what he’d envisioned when he thought about calling his first Riders touchdown, but Taylor played it cool when backup Cody Fajardo ran in from the two-yard line to make it a 6-0 game in the first quarter. It was a night of the unexpected, with coach Craig Dickenson opting to go with third-stringer Isaac Harker in the second half and the team almost stealing a win on the road.

He’ll hope for the best with the Riders on the field this year, but however the season unfolds, Taylor feels like everything in his life has come together in the last few months.

His hire came as a surprise to many who follow the CFL. For the last four and a half years, Taylor had worked at TSN. His Details segment — advanced stats and analytics — was a hit with CFL viewers and provided a different way for fans to look at the game and appreciate its stars. Taylor also did work on the SportsCentre desk and had called a pre-season game in Montreal in 2017.

There are two driving reasons (in no specific order) behind the move. One is that as a broadcaster that’s passionate about the CFL, being the voice of the Riders is something of a dream match.

The second is that Taylor missed his wife.

Taylor met Fiona Odlum when they both worked in Winnipeg in 2001, at A-Channel. Like Taylor, she’s been in broadcasting most of her life.

“We made some real sacrifices. It’s really gratifying. At the time, we thought, ‘OK, we’re making the sacrifice now,’ in hopes that big things would happen in my career and her (Fiona’s) career in the same place. And lo and behold, it actually worked out.” 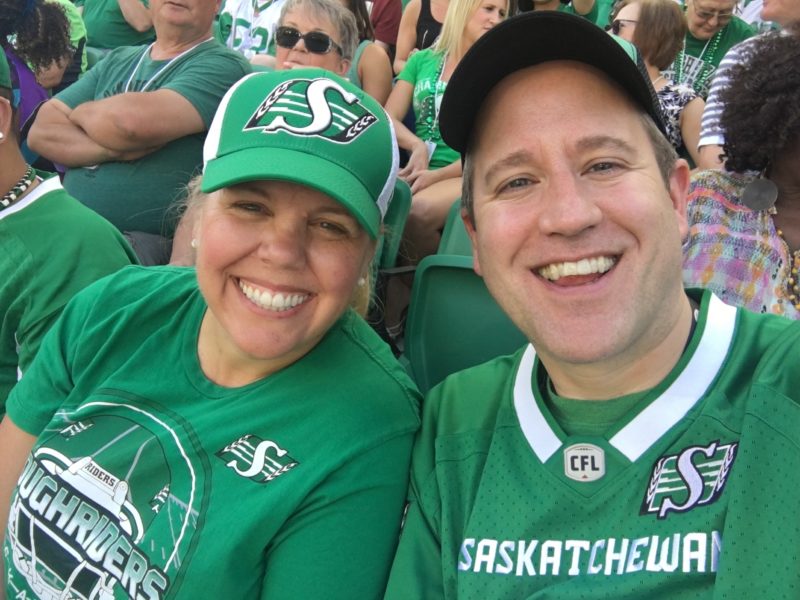 Derek and Fiona are pictured at a Roughriders game in 2017 (Photo: Derek Taylor)

“She’s one of the first people I met in Winnipeg,” he said. They were married in 2010. But nuptials and journalism are a complicated mix. Taylor got his job at TSN in 2014, but Odlum wasn’t able to leave her job in Winnipeg. She joined him in Toronto in January of 2016, but there was a speed bump. She didn’t like Toronto.

“By August, she’d had enough,” Taylor said. “She took a job at CTV in Saskatoon.”

Inside the TSN studios, Taylor was living his dream. So after 14 months apart, they embarked on another stretch of a long-distance marriage. This one lasted almost three years, from August 2016 to April of this year.

“It sucks. It’s brutal,” Taylor said. “(The distance) makes the time you get to see each other every two, four, six weeks, it makes those times fantastic. But when you don’t have your best friend around every day, it’s brutal.

“I always kind of knew I would leave TSN eventually because of the Toronto thing. I didn’t know it would be this soon. This job will never come open again in my working lifetime so you’ve got to go when you’ve got to go.”

She had complications from surgery in January and after a couple of weeks in Saskatchewan came out to Toronto for six weeks to recover.

“She’s 100 per cent now,” Taylor said. “It was the first extended stretch that we’d been together that wasn’t two weeks on vacation.

“It was nice, even though she was in hideous pain and needed drugs every four hours. It was nice for us to be together.”

They made it work, but it wasn’t easy. The time zones, the cost of flights and just being apart so often for so long can break a lot of relationships. Taylor said he never worried about that.

“The thing that I always had in my head and always wanted to convey was whatever happens, we’re still going to be married. If I have to give up this job that I dreamed about since I was 14, I have come to terms with that,” he said.

“We’re always going to be married. I hope that was reassuring for her but it was always the way I operated.

“As you get older, you have to make compromises in literally everything because nothing happens in the order you wanted it to. I wanted to be on SportsCentre when I was 25. I got there when I was 40. Oh well! I got to be there. It didn’t happen the way I planned it in my head but it worked out.” 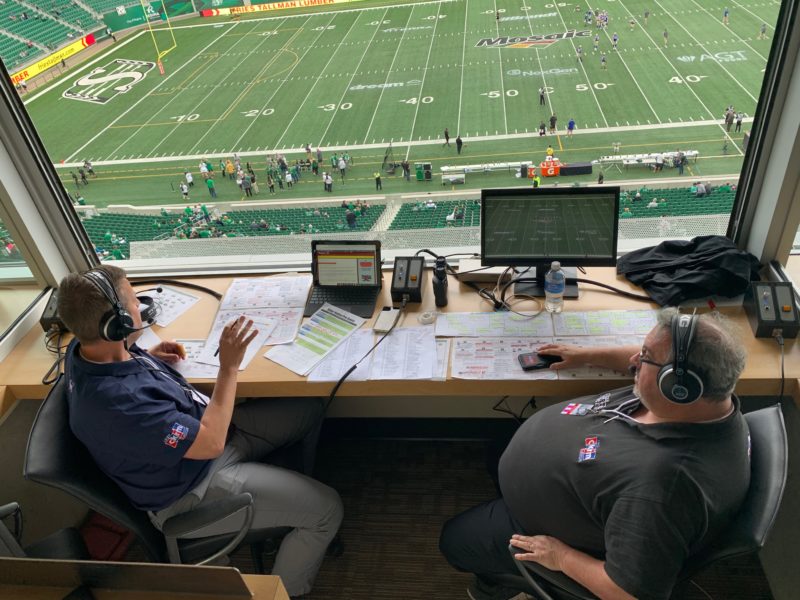 Taylor calls his first home game as the voice of the Riders (Photo: Derek Taylor)

It’s worked out perfectly. There are of course nine voices of teams across the league, but there’s something different about covering the Riders.

“I said to him, ‘Why does a Toronto guy come from TSN?’” said Murray McCormick, who is in his 10th season as the Riders beat reporter for the Regina Leader-Post.

“He says to me, ‘Because it’s the biggest job in sports.’ I really think it is. Rod Pederson (the previous Riders play-by-play voice) turned it into a brand. He created his website, he created his personality and he was very good at it. It’s a high-profile job. (Taylor) gets recognized in Saskatchewan already.”

Every game is on TV, McCormick points out. People don’t have to listen on the radio. But in Saskatchewan, they do.

“In Saskatchewan there’s…the idea that people are in the fields working, so they listen to him. They listen to the radio. It’s still relevant in Regina.”

He may never have thought of it growing up in Okotoks, Alberta and early in a career that zigzagged him across the country, that it would all come together for him in Regina. But here he is, finally fusing his passion, his career and the love of his life. In May, Odlum took a job with the CBC in Regina. They’ve bought a house. Together. They’re filling it with furniture and not hesitating to put nails in the walls. Finally, they’re home.

“I had a condo in Markham. It was super nice but I didn’t want to buy any furniture because I knew it was temporary,” Taylor said.

“Kelcey Brade lent me an air mattress, which had a slow leak and you’d have to fill it up once during the night. I slept on it for a year because I didn’t want to buy a bed.

Hearing himself say it, he laughed again.

“We made some real sacrifices,” he continued. “It’s really gratifying. At the time, we thought, ‘OK, we’re making the sacrifice now,’ in hopes that big things would happen in my career and her career in the same place. And lo and behold, it actually worked out. Believe it or not. I almost can’t believe it worked out the way we wanted it to.”

Taylor will go on the road again this week, hopping on the Riders’ charter flight to Ottawa. It’s different now, though, getting on a plane and coming back to his wife.

“We had our first moment (last) week, Monday. We were both getting ready for work at the exact same time,” he said. “We were like, ‘How do we do this with one sink?’

“I always knew I would have to leave (Toronto) at some point but I’m happy it worked out the way it did.”