A big night for a couple of receivers helped Week 2’s TSN CFL Fantasy winner put up a whopping 172.3 points.

TICATS FAN took Greg Ellingson (38.4 points) and Dominique Rhymes (33.8 points) on their way to winning the second week of the season.

Take a look at TICATS FAN’s roster below: 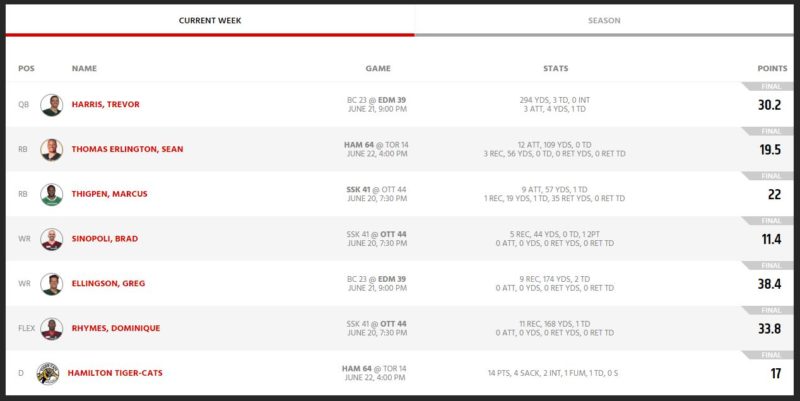 Trevor Harris was a great play in fantasy this week, putting up 30.2 points. The Esks quarterback threw 294 yards and three touchdowns, along with three rush attempts for four yards and a major score, in his team’s win over the BC Lions.

Ellingson (38.4 points) started to find his groove in his new team’s offence on Friday night, hauling in nine catches for 174 yards and two major scores in Edmonton’s win over the BC Lions.

TICATS FAN also took teammates Brad Sinopoli (11.4 points) and Rhymes (33.8 points). Sinopoli caught five passes for 44 yards and a two-point convert while Rhymes hauled in 11 for 168 yards and a touchdown.