Accuracy Grades: Who was on target in Week 2? 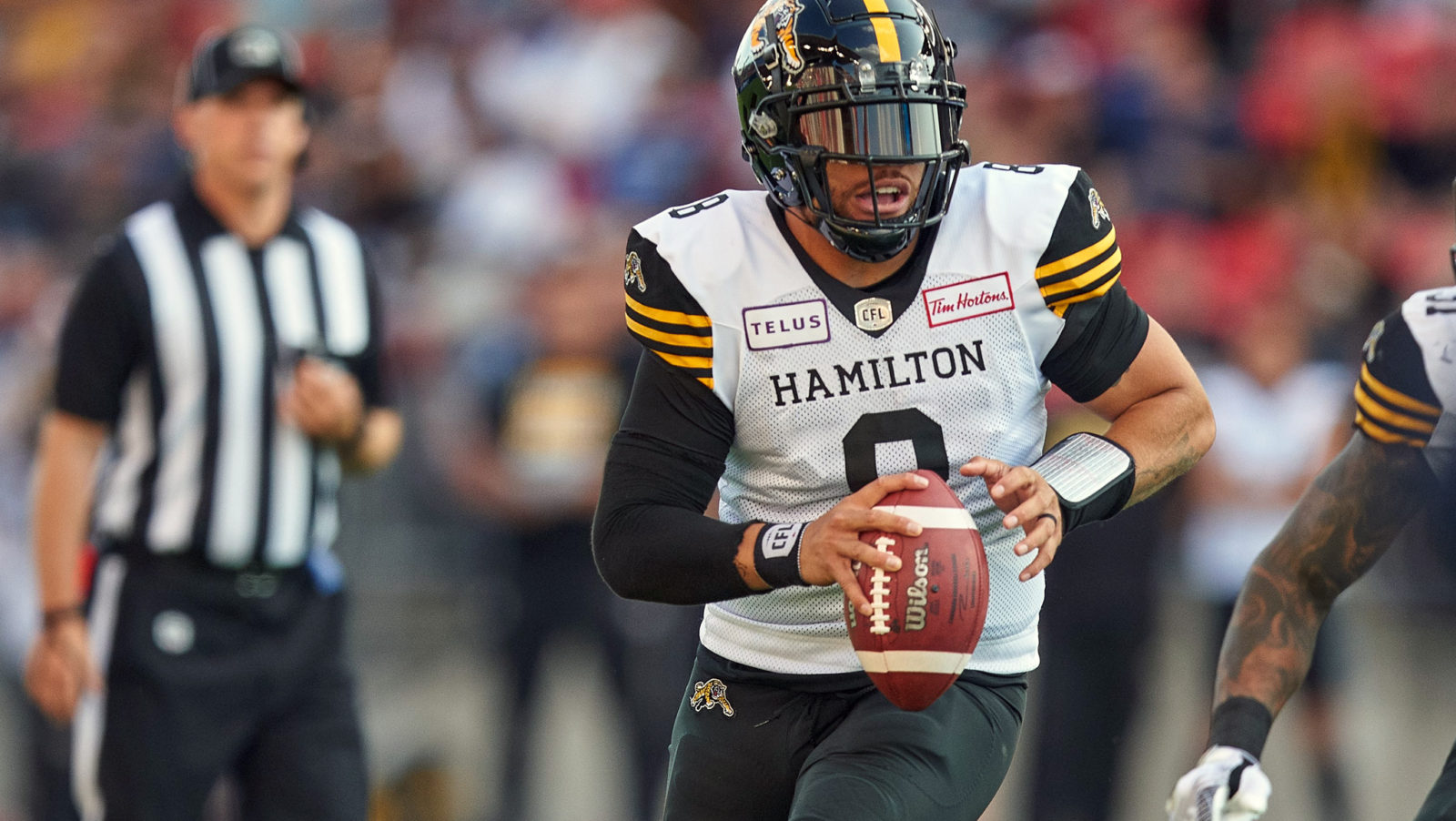 Accuracy Grades: Who was on target in Week 2?

Week 2 featured just three games but saw a total of eight quarterbacks get a chance to show off their arm as the Toronto-Hamilton game got out of hand and backups McLeod Bethel-Thompson and Dane Evans came in on cleanup duty.

The story of the week in accuracy – and really any other metric – was the surprising quarterback battle that broke out in the nation’s capital when Saskatchewan’s Cody Fajardo and Ottawa’s Dominique Davis came to life in an unprecedented way.

I don’t know if we’ll see another shootout like that again this summer, but I’m amazed it came between those two men who both dramatically improved their accuracy grades from difficult showings in Week 1.

Let’s take a look at how Week 2 shook out for the talented shoulder rifles of the Canadian Football League: 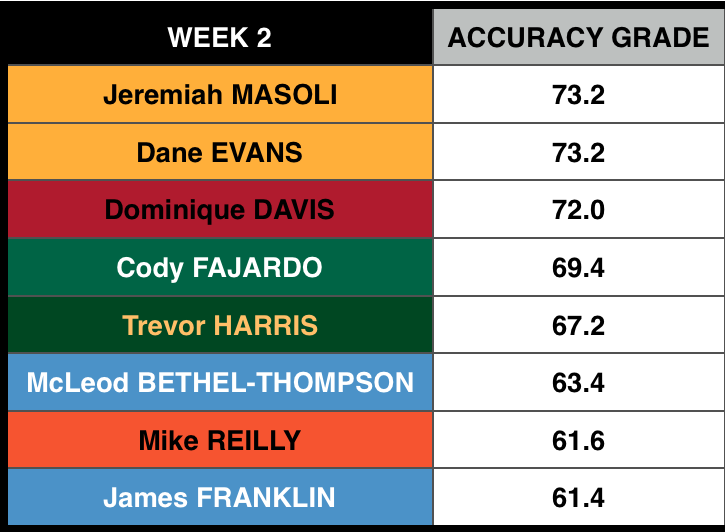 A rough outing for James Franklin in an unproductive first appearance as Toronto’s 2019 starter placed him at the back of the field. It really did look like the Argos were still trying to shake the Week 1 bye and extended training camp that came with it. I can’t imagine Franklin brings up the rear in accuracy or production for much of the season.

Shockingly just ahead of Franklin is Mike Reilly who was pounded into submission by the Edmonton defence Friday, including a stretch of nine snaps where he was sacked SIX times. That’s unheard of and would make any quarterback’s confidence falter. In the first quarter when BC was rolling and appeared ready to hand the Esks their first loss of 2019, Reilly’s accuracy grade was 80.0 on 8-of-10 passing, but the offensive line couldn’t hold up for the extent of the game.

McLeod Bethel Thompson entered the game late for Toronto and immediately showed off the arm strength and aggressive downfield mentality that will no doubt have some double blue fans clamouring for him to start in the near future if Franklin’s Week 2 struggles continue in Regina on Canada Day.

Trevor Harris got the win to stay unbeaten as Edmonton’s leading man in place of Reilly, but didn’t grade out high enough through the full game to reach the podium, a rarity caused by three outstanding performances: 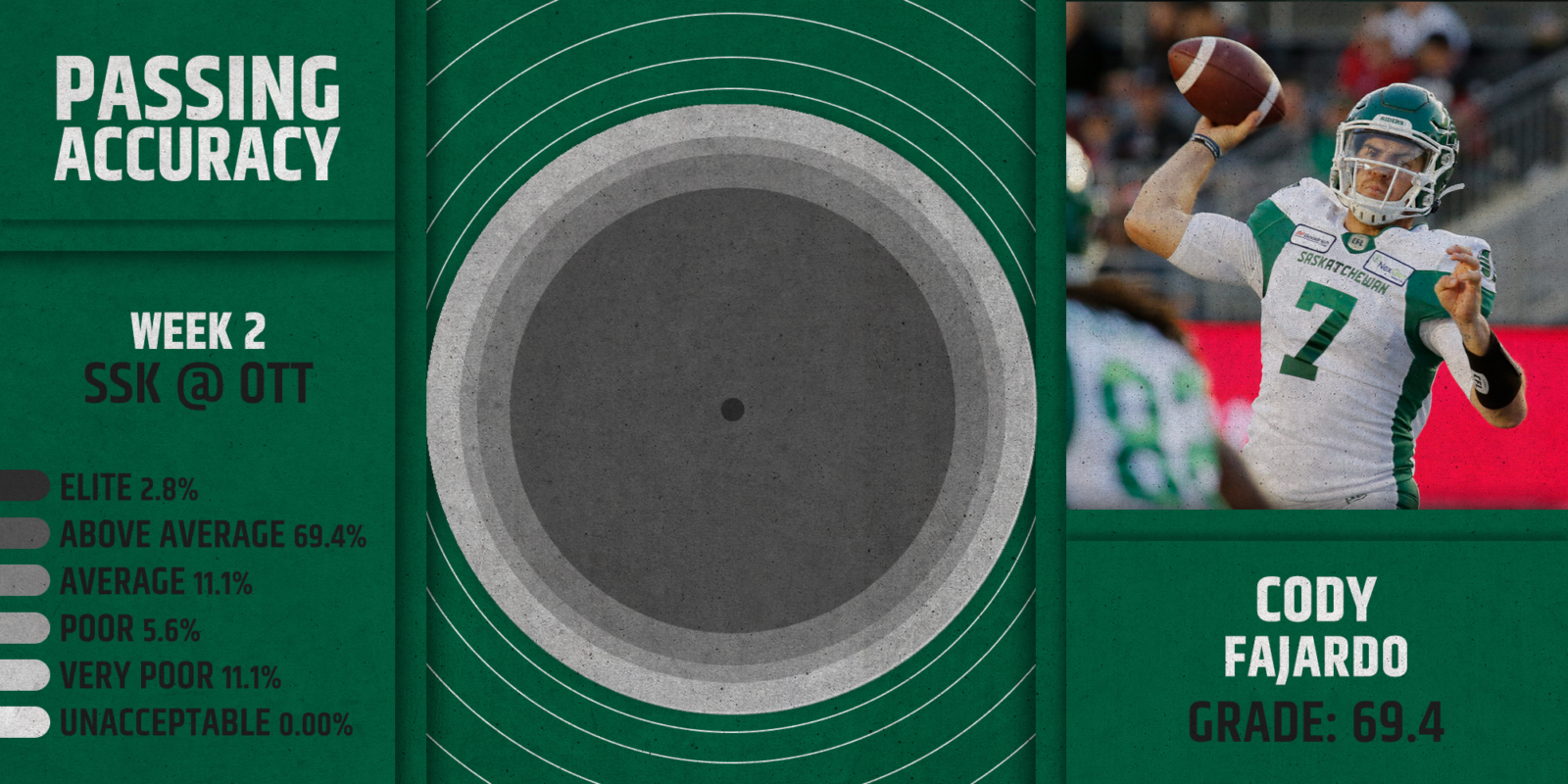 In a game full of surprises this might have been the biggest. In Week 1 emergency relief duty Fajardo showed not only a struggle to grasp the wet ball after a heavy afternoon Hamilton rainfall but the unwillingness to put it up in the air.

Several times on second and medium to long he pulled it down and decided to rely on his legs. In a passer driven league such as the CFL that made me wonder why Saskatchewan elected to start him over what looked like a superior passer in rookie Isaac Harker.

Fajardo shocked me with his touch and aggression, nailing everything from fades to window shots between linebackers. 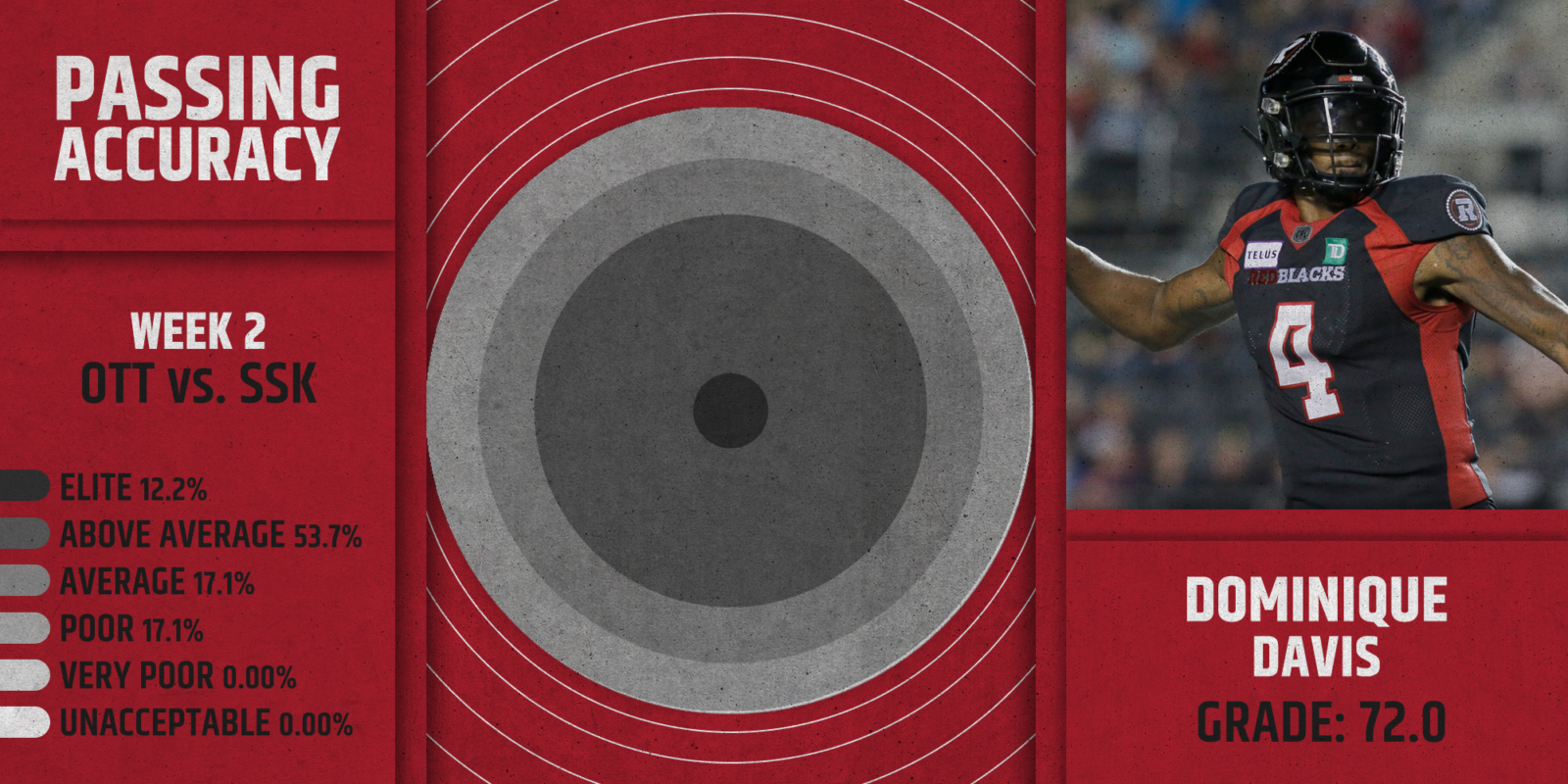 He was allowed to fight his way through a four-interception performance in his Ottawa starting debut and Rick Campbell has to be thanking himself for showing that patience after moving to 2-0 on the back of Davis’ Week 2 performance.

Davis had a higher percentage of elite throws (12.1%) than any quarterback in a single CFL game so far this year. 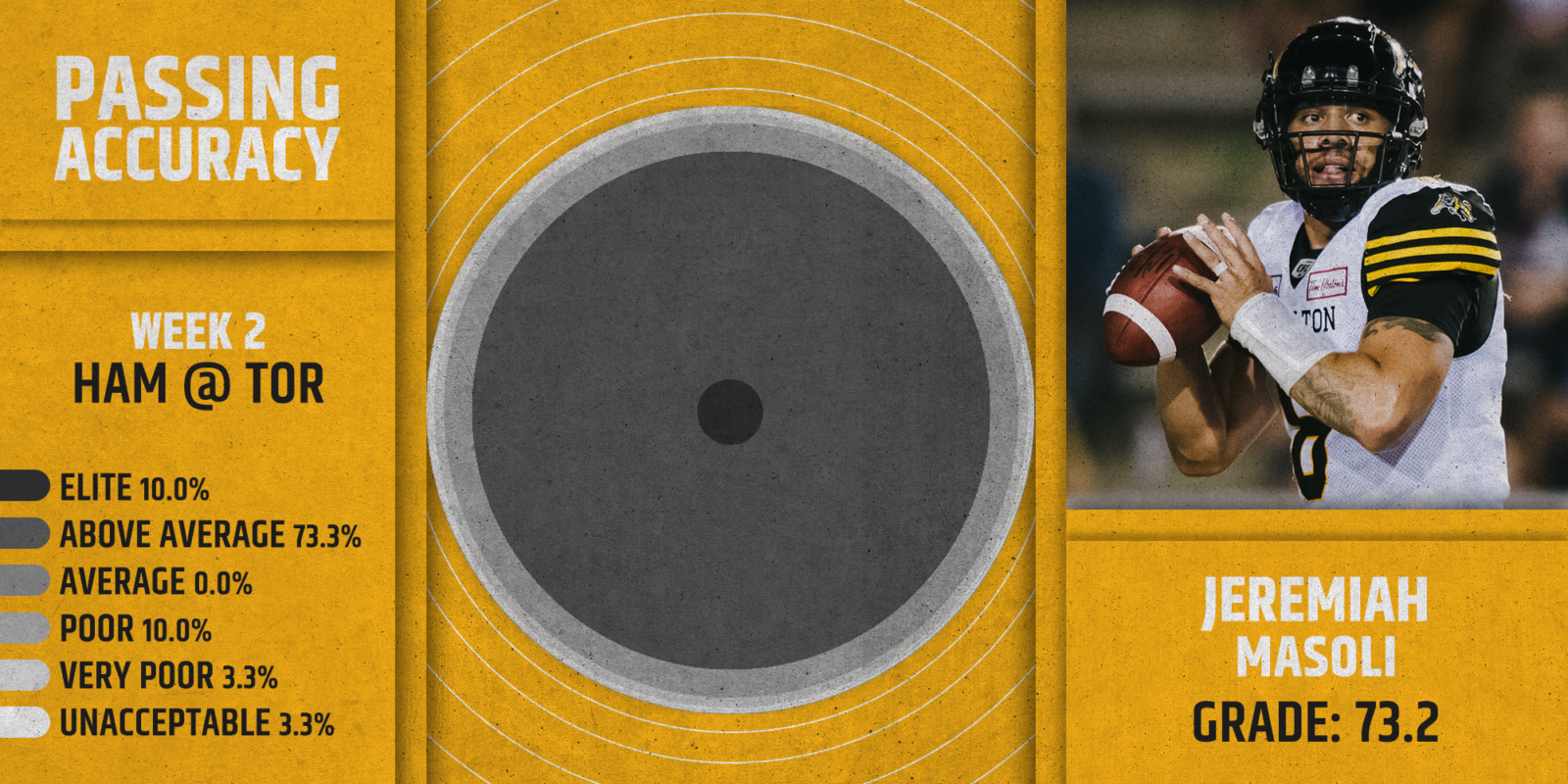 After a shaky interception to start the big smoke beatdown – which was magically stripped and recovered by standout blocker Brandon Revenberg – Masoli settled in and began to calmly and systematically deconstruct the Argos defence.

All three of the top performers this week got off to slow starts in 2019 but appear ready to roll with momentum as we get into the flow of the regular season. Honourable mention to Hamilton backup Dane Evans, who went 5-for-6 in relief of Masoli while sporting an identical accuracy grade to Jeremiah but doesn’t qualify for the podium as he has less than 10 per cent of his team’s attempts on the season.

With that in mind, let’s take a look at the updated season standings on accuracy grade. 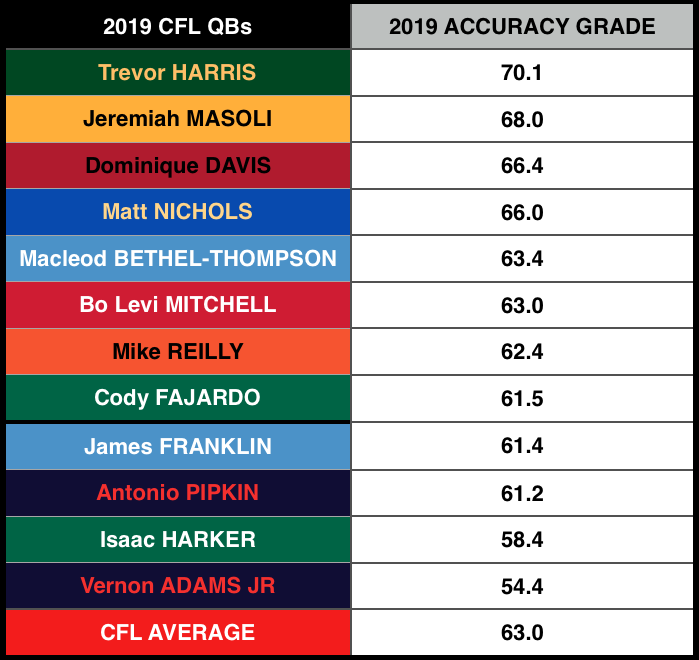 Trevor Harris is king as the top four performers on the season have yet to suffer a defeat. Week 3’s featured matchup comes Thursday as fourth-ranked Matt Nichols takes on current archery champion Trevor Harris in Winnipeg for what should be a duel more than worth investing your night in.

I’ll be back next week with the full breakdown of all four of the weekend’s games.