Cauz: Riders, REDBLACKS a Game of the Year candidate 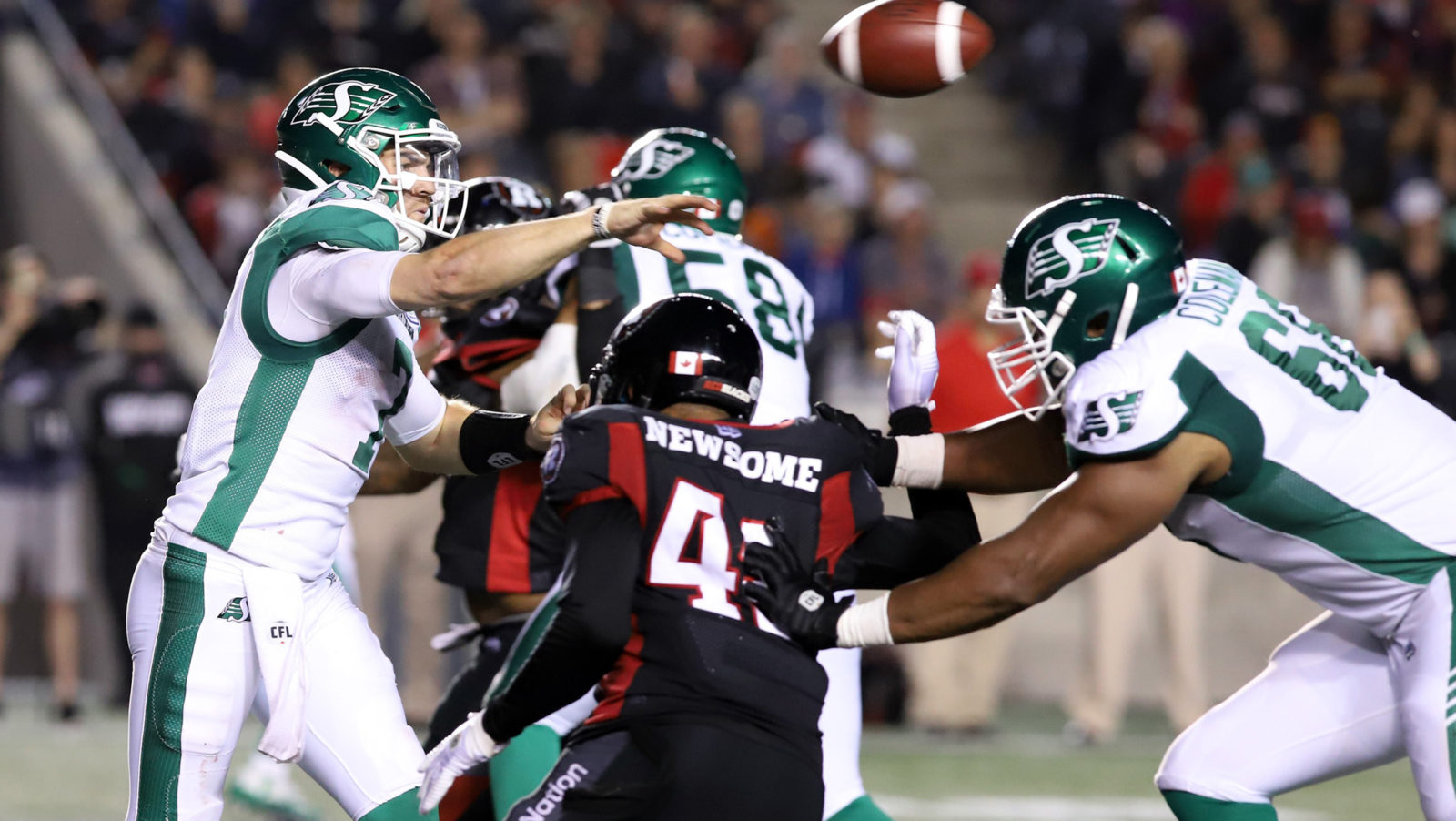 Cauz: Riders, REDBLACKS a Game of the Year candidate

I always hate the idea that you should set low expectations so that you will rarely be disappointed and that life will be filled with far more surprises and less pain. I get that mindset, and at times most of us need to adopt that approach, but it always felt a bit self-defeating to me. I would rather set high expectations so those moments where life met or exceeded them would feel all the sweeter. However, that was not the case on Thursday night. Let’s be honest, most of us did not envision a high scoring affair between the Ottawa REDBLACKS and the Saskatchewan Roughriders.

On one side you had Cody Fajardo making his first ever start after four years as an unremarkable backup. The only reason he was even on the field was due to the Zach Collaros injury. His counterpart was Dominique Davis, he of the four-interception game against the Calgary Stampeders. That turnover number for Davis actually could have been higher if not for a couple dropped passes. When you factor in all the offensive weapons who had departed in the off-season from both these teams I assumed we were looking at a low scoring affair, where the announcers would praise the defences and use terms like “gritty” to mask what looked like an exercise in punting. I know I was not alone in this assessment as I saw the OVER/UNDER for the game hovering around 43.5 points. Ottawa would score 44 points and the Roughriders were not far behind at 41.

Oh boy, I could not have been more wrong! This game was that hidden gem that just thrills you as a sports fan and is yet another reminder of the entertainment factor of this crazy sport. Now I promise I will not go nuts and tell you this is the start of Hall of Fame careers for either Fajardo or Davis. There’s a reason why Fajardo has been a backup for so long, he never even cracked a 100 yards passing before Thursday night. Davis, at the age of 29, had only one game where he exceeded 200 yards passing and had fewer than 100 career pass attempts coming into the 2019 season. From the outside it certainly felt like the only reason he was even starting was because of Trevor Harris’ departure to Edmonton.

Hey, did I mention how incorrect I feel right now? I couldn’t be more thrilled to be wrong as that 44-41 win by Ottawa kind of felt like the unofficial kick off to the 2019 season. Hey, the Raptors have taken our attention away from just about every sport. It is a tiny sample size but a game like that does force me to reconsider my feelings about both these quarterbacks’ future potential, especially in the case of Dominique Davis. We all know how good a coach Rick Campbell is and maybe we should have given the entire organization the benefit of the doubt after what looked like a disastrous off-season. This is a team that has gone 39-31-2 with four playoff wins and a Grey Cup victory in the past four seasons. Obviously Campbell and his staff have all the faith in the world in Davis as through two games he has put the ball up 83 times, completing 59 of those passes. Clearly Ottawa is not going conservative on offence in an attempt to ease Davis into the playbook.

In the team’s victory over Saskatchewan, Davis completed 30 passes out of 39 attempts for 354 yards with three touchdowns and just as important zero interceptions. There were two throws that stand out for me. His 23-yard touchdown strike to Jean-Christophe Beaulieu showed off his Davis’ accuracy while on the move as his pass was just over the hands of Loucheiz Purifoy and hit Beaulieu right before safety Mike Edem could be in position to make a play.

Now, let’s flash forward to the final 3:30 of the fourth quarter with Ottawa holding on to a 41-33 lead. The play that will get overlooked was Davis’ 15 yard completion to the other Dominique, Dominique Rhymes. On that second-and-five with just over three minutes to go Ottawa could have gone safe and ran the ball to get to the three minute warning, punt the ball and pin Saskatchewan’s offence deep. Instead, Davis hit Rhymes with a bullet of pass in a tiny window due to the coverage of Nick Marshall, who actually had a much better game than you might imagine considering the production of both Davis and Rhymes. What makes this play stand out beyond the pass was the duress which Davis was in as the pocket was collapsing and he would be hit by noted enemy of all CFL quarterbacks Charleston Hughes just as he released the ball. Two plays later the Dominiques would again connect, this time on a 38-yard pass with Davis hitting Rhymes in stride. Soon after Lewis Ward would do what he always does, hitting a field goal and, like that, it’s 44-33 with two minutes to go. The REDBLACKS would hold on for the win.

I would be remiss to not talk about the most surprising performance of the night: that would be Cody Fajardo completing nearly 80 per cent of his passes for 360 yards with two touchdowns and also zero turnovers. You cannot throw a better pass than Fajardo’s 44-yard touchdown pass to Shaquelle Evans with almost no time less in the second quarter. He drops the ball right in front of Evans, who barely has a step on Chris Randle and a split second before Corey Tindal can disrupt the play. Just a thing of beauty. The other pass that amazed me was all about Fajardo overcoming pressure. It was a third-and-three with 5:30 left in the game with Saskatchewan down 41-27. That’s not exactly an ideal situation for any quarterback, especially one making his first career start. Not only did Fajardo overcome the pressure of  time but he also wasn’t fazed by the seven man blitz the REDBLACKS threw at him as he calmly stepped up and went deep to Kyran Moore for 27 yards. The next play saw Marcus Thigpen score from six yards out. Cody and the Roughriders were not going down without a fight. It was impressive to watch Fajardo keep slinging it till the last moment as he eventually cut the lead to 44-41 with less than 30 seconds to go.

I have no idea what this one game will mean for either of these players’ development/journey in the CFL but it was a hell of a building block for both these franchises looking for answers from the quarterback position. At the very least I do know I got to witness an early candidate for Game of the Year and yes, maybe I do owe an apology to an Ottawa franchise that has started the year beating two teams that went  25-11 last season with Calgary winning the Grey Cup. Please feel free to continue proving people like me wrong!