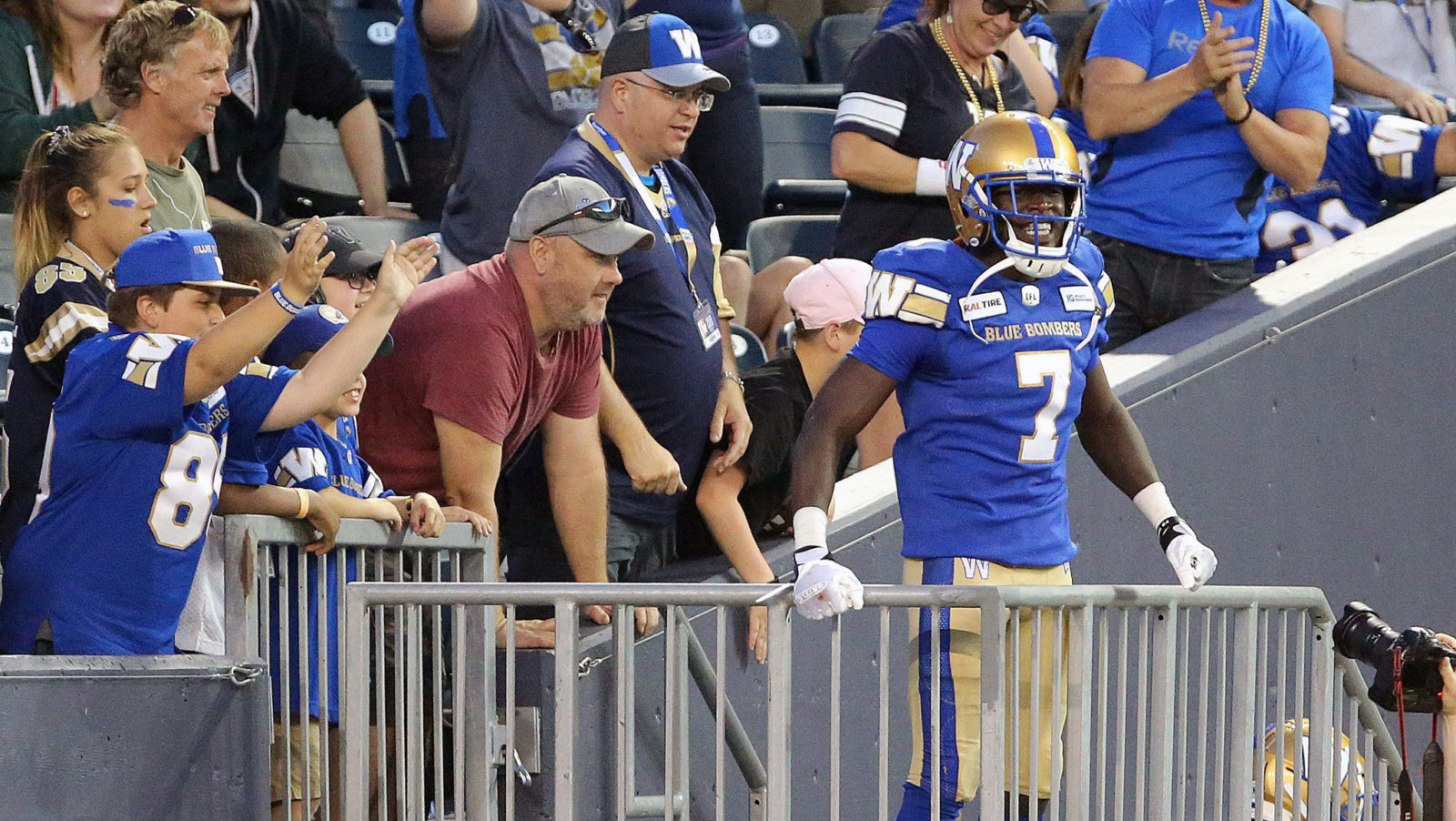 WINNIPEG — After just two games, it appears Lucky Whitehead is emerging as a star in the Canadian Football League.

The 27-year-old was unstoppable at times on Thursday night, scoring twice to lead the Winnipeg Blue Bombers to a 28-21 victory over the Edmonton Eskimos in their home-opener at IG Field.

Not even an illegal contact penalty could stop Whitehead in the first quarter, when he blew by Godfrey Onyeka before hauling in a 75-yard touchdown for the first major score of his career.

Then, in the third, Whitehead caught a ball on the line of scrimmage, followed a couple of blocks and eluded several defenders on the way to a 41-yard catch-and-run, his second touchdown of the night and one of the top highlights early in the 2019 season.

On an offence suddenly stocked with big-play threats, Whitehead might be by far the most exciting.

“”It’s a good look at what he can do,” Bombers head coach Mike O’Shea said after the game.

“Unbelievable player,” added quarterback Matt Nichols. “The later touchdown, how many people in the world can turn that into a touchdown? Usually that would be a 12-, 13-yard gain, pushed out of bounds. He’s lightning in a bottle for sure.”

Whitehead finished with seven catches for 155 yards, while the Bombers overcame two fumbles by star running back Andrew Harris — including one with a minute to go that let the Eskimos hang around — to secure their second victory of the season.

The win moved the Bombers into sole possession of first place in the West, where they’re the only remaining undefeated team. The Hamilton Tiger-Cats and Ottawa REDBLACKS still haven’t lost in the East.

For Whitehead, making just the second start of his career, Thursday was an opportunity to show he’s far more than just a returner.

“I didn’t even know that I was going to be a receiver,” said Whitehead. “Always a lot of questions with that. People ask me if I’m a returner that can play receiver. I can do both, but whatever workload they give me I’m ready for, and it’s been fun so far.

“That was a breakout for me, just to show my speed. It was overall a great game.”

It was an early-season heavyweight bout in Winnipeg, a game featuring the top two teams in this week’s Nissan Titan Power Rankings. And it was far from perfect from the Bombers’ perspective, as the team allowed 440 yards, more than 36 minutes of possession and was doubled in first downs (29-14).

In the end, though, the Bombers didn’t allow a touchdown against the vaunted Eskimos offence, holding Trevor Harris to 345 passing yards on 54 attempts. With the chance to tie the game late, Harris threw three straight incompletions, clinching the home-opening win for the Bombers.

“There are going to be some plays we can correct defensively, and some penalties,” said O’Shea. “If we clean that up then the yardage comes down. But I thought our defence did a great job of holding them out of the end zone, against a very good offence.

“We’ll correct the mistakes that put them in some of those positions and we’ll be better.”

Andrew Harris also caught a touchdown pass for the Bombers, though the work horse running back was mostly contained, rushing for just 34 yards on 10 carries. Nic Demski added a touchdown on the ground, leading the team with 49 rushing yards on three carries.

The Eskimos’ points all came off the foot of Sean Whyte, who made all of his seven field goal attempts.

“Every win’s different,” said Nichols. “Our defence played unbelievable. Allowing no touchdowns was the big difference in the game. Us as an offence, converting in the score zone was huge for us.

For Whitehead, the last three minutes took a lot longer than he’d grown accustomed to in the league south of the border.

“Three minutes is so long,” he said. “Defence played phenomenal. Shoutout to the defence, we just had to come out and find a way to get that win. Kudos to the team.”