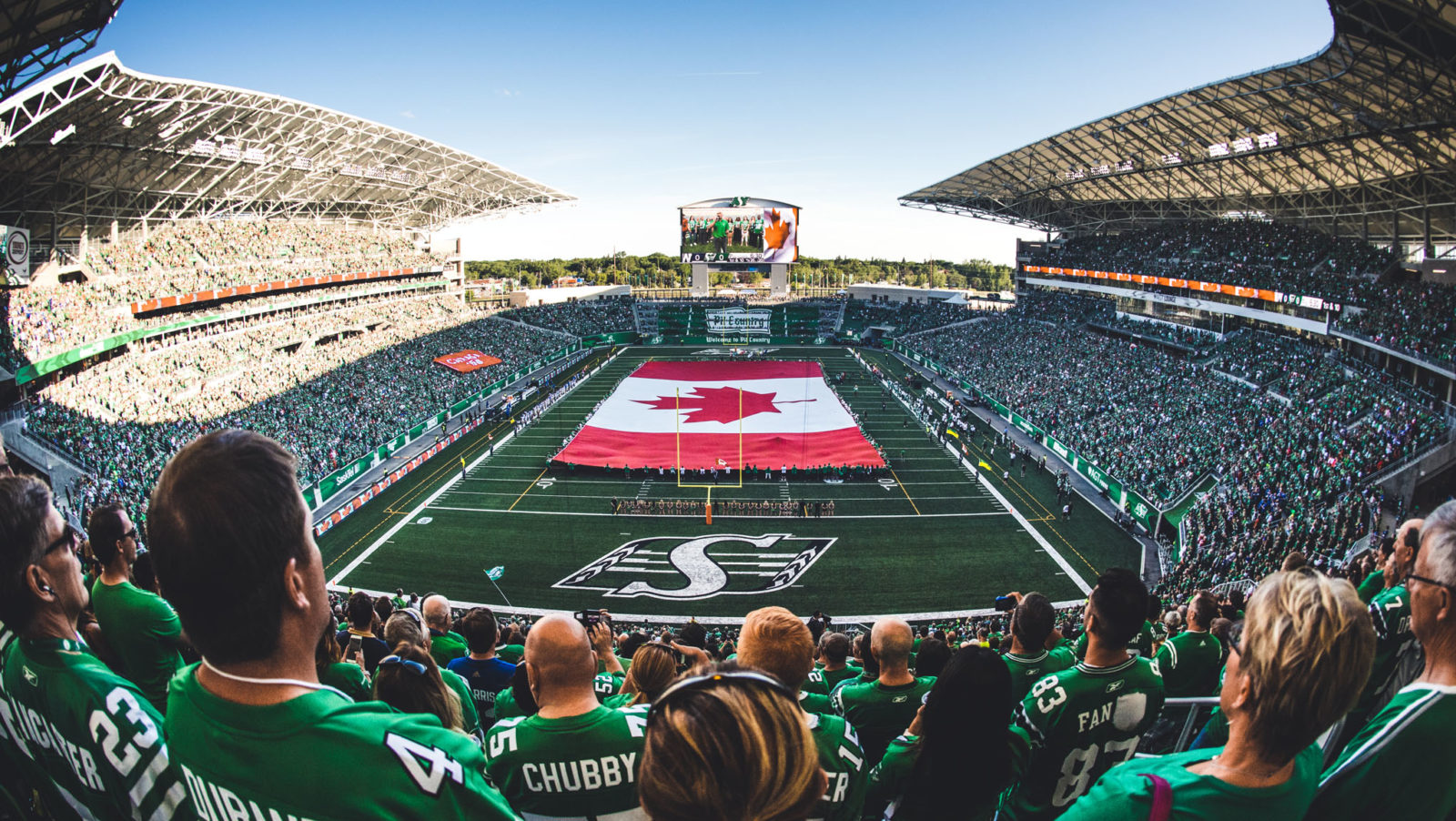 Navneet Kaur will stand on the field at Mosaic Stadium on Canada Day, her first as a Canadian citizen and listen as O Canada is performed. She’s not sure how she’ll handle it.

“Oh, it will be…my husband John says, ‘I have not seen my wife be this ecstatic. I haven’t seen her this happy for anything, not even our wedding,’” she said.

She hopes to sing along but she won’t be surprised if she cries. Canada Day will mark the conclusion of a 12-year journey for her that started when she was a graduating high school student in India’s Punjab province. She’s battled through culture shock, through painful loneliness, through the finer points of learning a second language, through relying on public transit in Regina’s harsh winters and through finishing school and working a job she hated.

The hardships have all been worth it. She got her education, she has a job she likes and after a few years in Regina, she met her husband. Their daughter, Norah, is seven-months old.

Kaur will be one of 13 new Canadian citizens on the field at Mosaic on Monday. A crowd of up to 30,000 fans will be on hand, with the biggest Canadian flag in sports unveiled in front of them. Everyone in the building will have the chance to take the citizenship oath together. 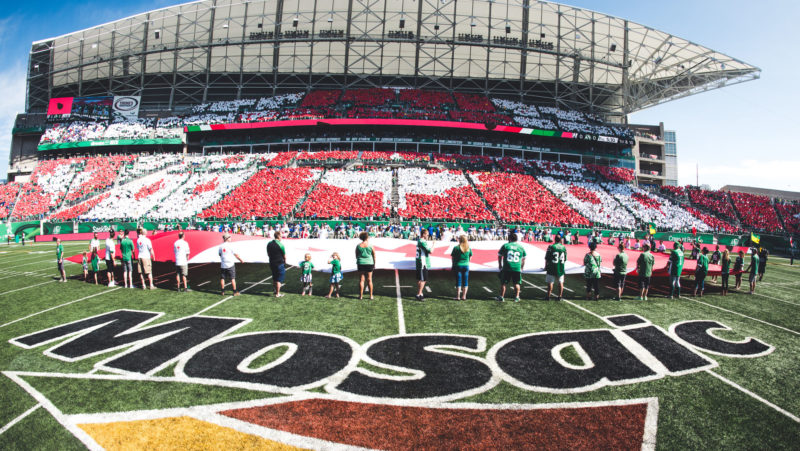 Like these fans holding the flag in 2017, Kaur will be one of 13 new Canadian citizens on the field at Mosaic on Monday (Johany Jutras/CFL.ca)

“The closest feeling would be when Neil Armstrong went to the moon and put the flag there. That’s how I might feel,” she said. As she speaks, there’s a giddiness to her laugh, like a part of her still can’t believe she’s done it, that what has been in a sense her life’s work is complete.

“(I’ll be) holding the flag (on the field) and this is the end of the struggle, of the journey of an immigrant,” she said. “Just being a citizen and embracing it.”

There are things about Regina and about Saskatchewan that remind Kaur of home. She grew up in a rural village — “People are down to earth, we’re a farm family, chicken farm and all that” — with supportive, liberal parents that sent her to an English-immersion school. As she got older, though, the glass ceiling for women started to become more and more clear.

“I had big love for sports and I played soccer at a provincial level,” she said.

“But as soon as I wanted to advance in sports I would hear comments from I don’t know who, it could be neighbours saying, ‘Girls play sports so they can lure boys.’ Things like that. If boys were playing on the ground it’s fine but if I went and played with them it’s not fine.

“That kind of mentality, I really wanted an out so that I could really figure out who I am and be at a place where I am confident in myself. My aunt at that time was deciding to go to Canada. She’d already done her research and she was saying all of these good things about Canada.

“That’s when I thought I could finish high school and move to Canada. I was ready to do literally anything and everything to get that freedom. I didn’t even know what that freedom looked like…but you knew in your gut that Canada is a better place than where I am now, in that mindset.”

She had to convince her parents and her aunt to let her join her. She spent her first year in Surrey, BC, before becoming a business student at the University of Regina, where permanent residency could come faster to an immigrant. Away from her aunt with her immediate family thousands of kilometers away in India, Kaur felt alone.

“There were times where emotionally you give up,” she said. “When it’s minus-40, (you ask yourself), ‘Why am I here?’ When I was single or didn’t drive and grocery shopping was hard on the bus. Going to work sometimes you’d miss a bus or you were just there and the bus passed right in front of you.

“I remember getting up at 6:30 and walking in the piles of snow across the street because at 6, 6:30 a.m., no one shovels the snow that early. I was the first one to pave that path every morning, like ‘Oh, this is terrible.’

“I remember it so clearly. The yellow streetlights were on and I’m crossing, no traffic, just silence. And sometimes it was that nice Chistmassy snow falling on your face. Those were good days. Then the bad days you were shivering with the wind on your face. Your eyelashes are freezing and if you have a cold you can’t breathe through your nose. Any air you breathe through your mouth is being collected on your eyeglasses…the fog would freeze on all of my glasses.

But again, through the struggle came the foundation of the life she now has. Her business program was fast paced and busy and forged friendships with her classmates. She bonded with the growing number of international students at the U of R campus. She went out salsa dancing one night and met John, her eventual husband. 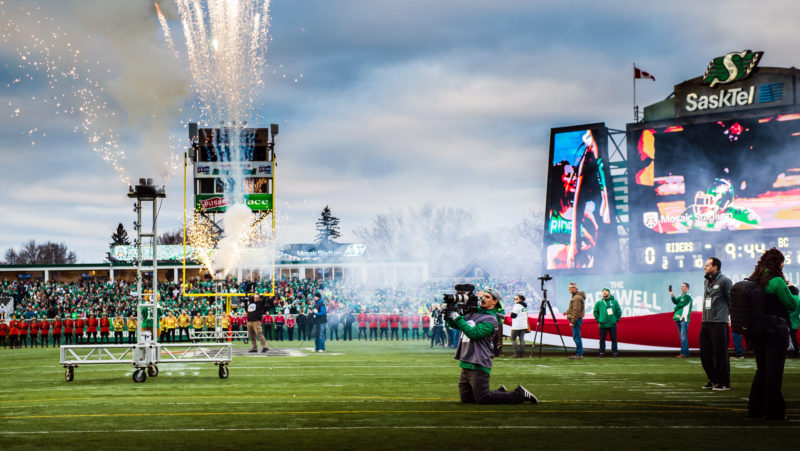 Kaur will get to enjoy a Riders game and celebrate her citizenship on the field at Mosaic Stadium (Johany Jutras/CFL.ca)

In the years they’ve been together, John’s Rider-loving family has helped pull her into one of the main threads that run through the community and the province. She’ll never pose as a diehard that follows the daily ins and outs of the Riders, but Kaur has become a fan and loves game days. That she’ll get to celebrate her citizenship on the field before a Riders game on Canada Day means a lot to her.

“Coming from India, cricket was one thing that brought all of us together. Regardless of what time of the day it was, everything would stop. You’d just sit and cheer for the country.

“The CFL, especially the Roughriders, is that for me. Although at the beginning I didn’t understand the language of the game, I knew the spirit behind it.

“I played sports myself, I’ve seen my family getting excited for sports.”

Kaur will stand on that field on Monday and maybe she’ll sing, maybe she’ll cry. She’ll think about the last 12 years and the life that awaits her daughter. There was a ripple effect from her move. Her brother has followed in her footsteps and now lives in Saskatoon, as does their cousin. Her sister is doing her master’s degree in computer science in Ottawa and another cousin is now in Montreal.

She followed her gut, basically hoping for the opposite of what she felt around her as she grew up and it’s paid off.

“It’s a sense of freedom but it’s also a sense of responsibility,” Kaur said. She wants to work with other female immigrants, to help them through the language barriers, the culture shock and the loneliness, to tell them that they’re home.

“I’m finding any way and every way to do that,” she said.

“I have such a soft spot for anyone who’s an immigrant, regardless of which country because that journey is almost the same for everybody.

“That freedom that I initially wanted, Canada definitely gave that freedom to me. Canada gave me the things I wanted and now it’s my turn to give it back.”