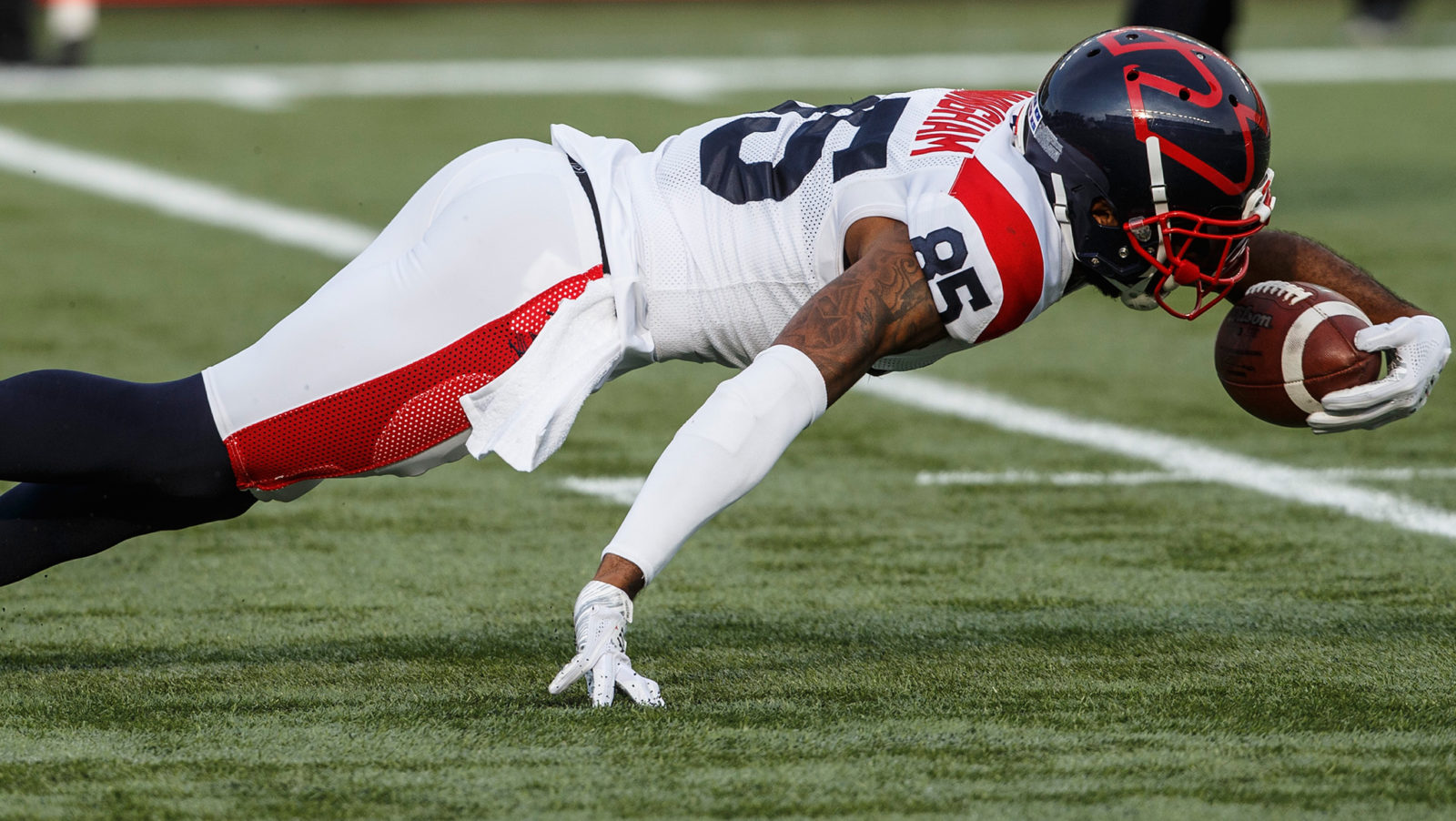 TORONTO — Not a single Montreal Alouette ranks inside the top 20 most chosen Fantasy players for Week 4.

Considering the Als’ early struggles it’s no surprise, but there could be value to be had — especially in a matchup against the Hamilton Tiger-Cats that could yield some points.

The over/under of 56.5 points (odds provided by LeoVegas) is the highest of any game this week, and players like B.J. Cunningham and William Stanback shouldn’t be overlooked despite their team’s winless start.

Asked to select a lock of the week for Week 4, Jeff Krever of the CFL Fantasy Podcast led things off with Cunningham, who’s had at least seven catches and 93 yards in each of his two contests this season.

“Off the board a little bit but he’s had such good chemistry with Vernon Adams Jr,” said Krever. “He can do it all. He can be a possession receiver, a check down guy underneath and he can beat a guy deep and go vertical.

“I think B.J. Cunningham has a really good game against the Hamilton Tiger-Cats after flirting with that 100-yard mark last week.”

The absence of Bralon Addison has forced Pat Steinberg to change course with his lock, landing on Ticats quarterback Jeremiah Masoli in a rematch with the Alouettes. Masoli racked up 29.7 points last week despite throwing three interceptions.

Hannah Nordman is going with Lemar Durant of the BC Lions, who have a favourable matchup with the struggling Toronto Argonauts.

“I don’t think he’s getting enough credit,” said Nordman. “He’s been close to 20 points twice, he’s been in double-digits all three times and he’s only $5,100, so Lemar Durant is definitely locked into my lineup.”

Lucky Whitehead showed up in a big way in Week 3, but is he here to stay? Plus, is Nick Arbuckle worth considering if he starts in Week 4? Pat Steinberg, Jeff Krever and Hannah Nordman debate in the latest episode of the CFL Fantasy Podcast.

Lucky Whitehead has been the centre of attention following a seven-catch, two-touchdown performance in Week 3, and the Bombers’ first-year receiver remains on the bargain bin radar. Steinberg, however, believes another low-cost Bombers receiver is due for a big outing.

“I still think Chris Matthews is too attractive a play at $3,500 to not get involved,” said Steinberg. “He wasn’t really involved last week, I think he sees a little more action. He’s too big of a target, he’s too sure-handed and he’s too dangerous in the red zone to not be a factor.”

Hannah is staying with the Lions with her money pick, going with another Canadian receiver in Shaq Johnson. He’s had a quiet start to the season in 2019, but could see more opportunities than usual if the Lions put up points against the Argos.

“Shaq Johnson ticks a lot of boxes. $2,500, Reilly is starting to get rolling, he’s seeing targets. Shaq Johnson could have a big week.”

Krever rounds out the bargain buy picks with another $2,500 option in the speedy KD Cannon, who had a season-high 71 yards on five catches in a win over the Argos.

“KD Cannon is a forgotten member on that cast of Riders receivers and against a Stamps secondary that’s a little bit dinged up to start the year, I think Cannon’s speed comes into play with Fajardo’s big arm and they’re due to hook up this week.”

Projections below powered by DailyRoto

*Pat Steinberg originally selected Bralon Addison as his lock, who has since been added to the injured list