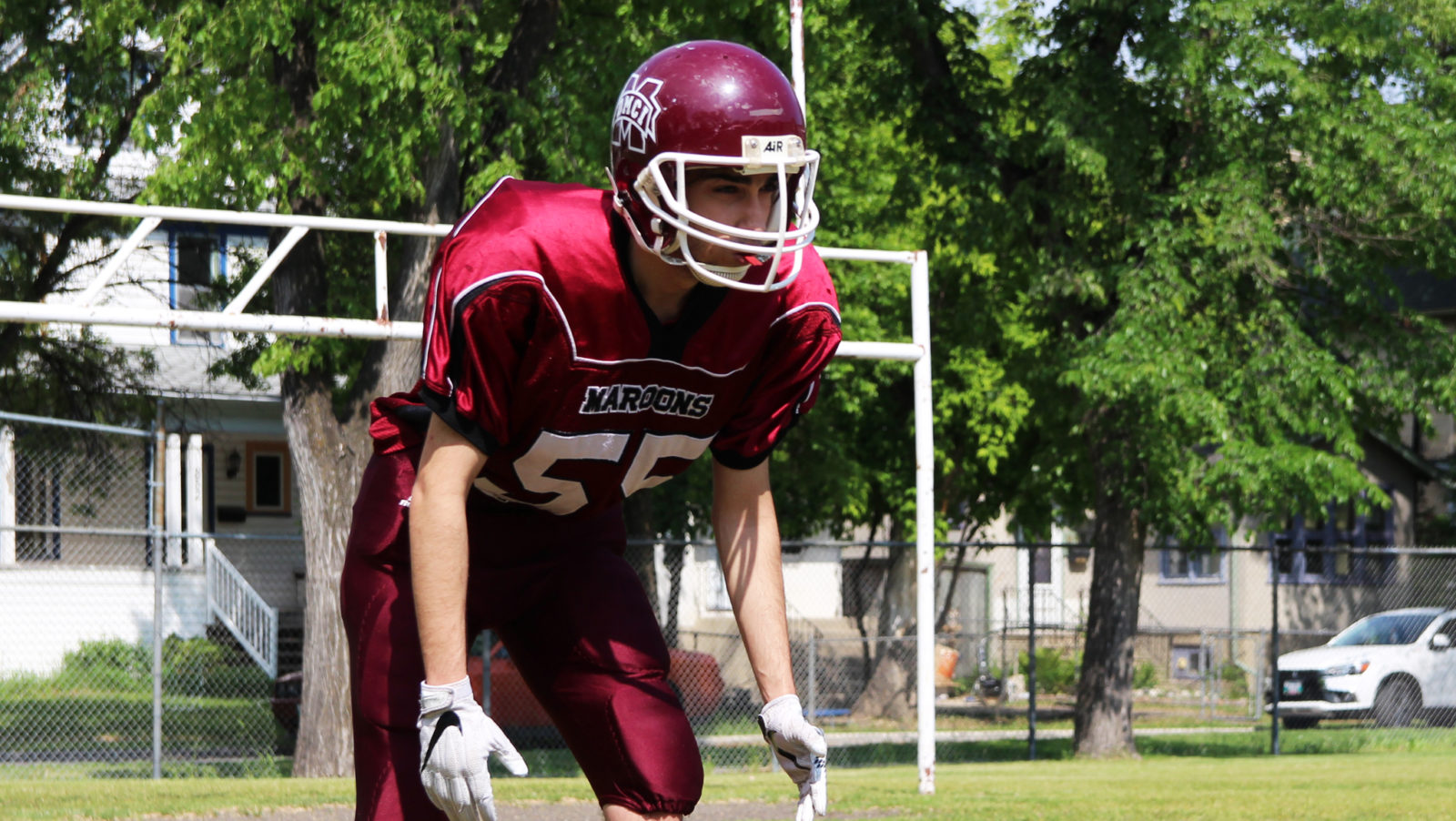 It didn’t take Kiarash (Kia) Kousha long to figure out that he needed to have plenty of energy, determination and audacity, if he was going to make it work.

Kousha was referring to tackle football – and a sport that he wanted to learn and play.

Other than the one time when he watched football in a movie half-way around the world, Kousha was afraid and nervous that he lacked the simple knowledge that focused on the rules and how the game was played.

Welcome to the world of a 17-year old from Winnipeg who, just a few years ago, was living in the capital of Iran, which is a country where young people are more accustomed to the National sport of wrestling.

Kousha came to Canada, with his family, and the adjustment to many things, has taken some time. Now, a student at Daniel McIntyre Collegiate, an inner-city institution with a large immigrant population, Kousha found out quickly that the spotlight on his school shines on football. 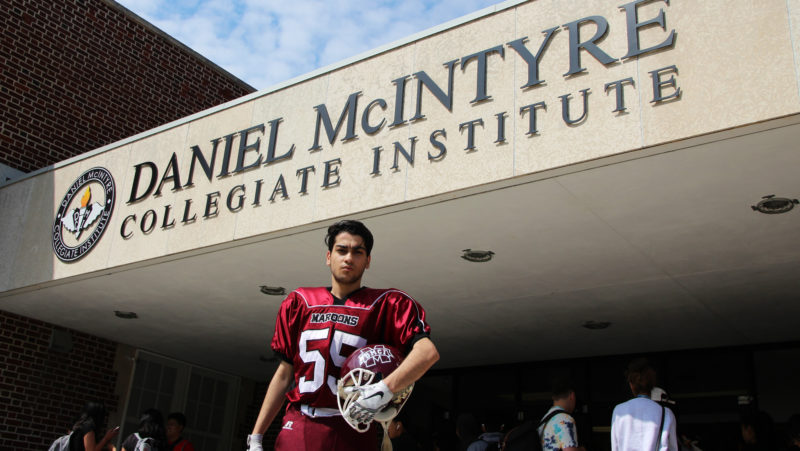 “When we came to Canada in June of 2017, I noticed how much freedom there was here and later, when the winter came, how cold it gets here,” said the grade 11 student. “I watched a game of football here and was embarrassed at how much I didn’t know and how good Canadians are at playing (the game).”

Things have changed quickly for the 6-foot, 175-pound immigrant, who voices his own vision.

A former championship swimmer in Tehran, Kousha informed his parents that he wanted to play football. So green with inexperience, understanding the wear and tear in the game, he remembers the parental resistance because they wanted him to focus on what they called “safe” sports.

But Kousha was motivated and fueled by wanting to be a game-changer.

He didn’t tell his parents that he had signed up to play football, hoping his success would earn their love and respect. One day, after coming home with a few bruises, he knew there would be questions raised, and struggled to find answers to address his parents’ concerns. Then, he told them and they tried to support him.

His adventurous times were often overshadowed by boldness and hesitation. Daring at times, with limitless potential and unforgettable plays, his new reality was to play, have fun and be the best he could be.

Knowing he would eventually do his best to get his parents to fully understand, the youngster was confronted with another challenge – and it happened in one of his first few games against rival Miles Macdonell Collegiate. A girl was on the opposing team – and, he admitted, it was something he didn’t expect.

“I really wasn’t sure about how to tackle her,” recalled Kousha, a linebacker at the time and thinking the game was only played by boys. “I figured it out rather quickly, and with some advice by the coaches. In this game, if I didn’t stop her, she’d knock me down.”

“He was apprehensive and unsure about tackling a girl,” said St. Cyr. “She came after him, and our defensive coordinator told him that he had to tackle her.”

St. Cyr said Kousha was very coachable, and has since developed into a very good player. Now, in his final year of secondary school, Kousta could very well be on the radar of recruitment by university coaches. His strong academic grades and desire to become a doctor also make it attractive for the next level.

“First time I saw him, he was shy, humble and just wasn’t skilled, but very eager to try and we gave him an opportunity,” said St. Cyr. “(Kousha) took a liking to the defensive game. “We saw his speed, and he was picking up the game quickly. In Week 3, he did enough to convince us that he would be a starter.”

“With some good coaching, there’s no doubt in my mind that he’s going to be an elite university player.” 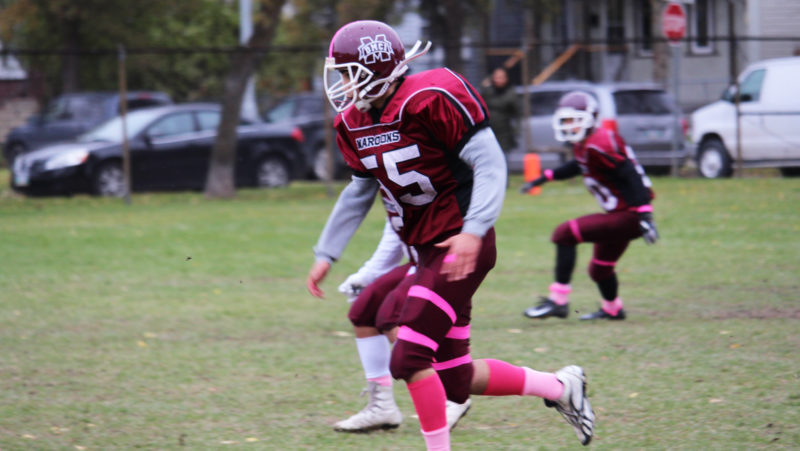 Kousha learned the concepts. Some were intriguing, but he mixed them with what he saw, and read, with what he was being taught. He knew intimidation and smash-mouthed comments by opposing players were part of the game that he would have to ignore. His doubts were over-taken by his gutsy attitude to be prosperous and disciplined.

“We were worried, since his parents were hard on him playing, that he’d be gone,” added St. Cyr. “(Kousha) pushed ahead and saw something in football that made him very ambitious – and he’s taking university courses. With some good coaching, there’s no doubt in my mind that he’s going to be an elite university player.”

Kousha’s initiation to football turned out to be rewarding in many ways – including one of the biggest caveats. As a rookie, he was on a magical team that won a Manitoba high school championship. His tenacity, and showing fearlessness, would result in a greatness revealed on a football field.

With graduation leaving many spots open for this season, Kousha is hoping to convince coaches that he has what it takes to be a wide receiver and may be a challenge for quarterback. Another journey lies ahead for Kousha, and it is one he’s ready and eager to conquer.