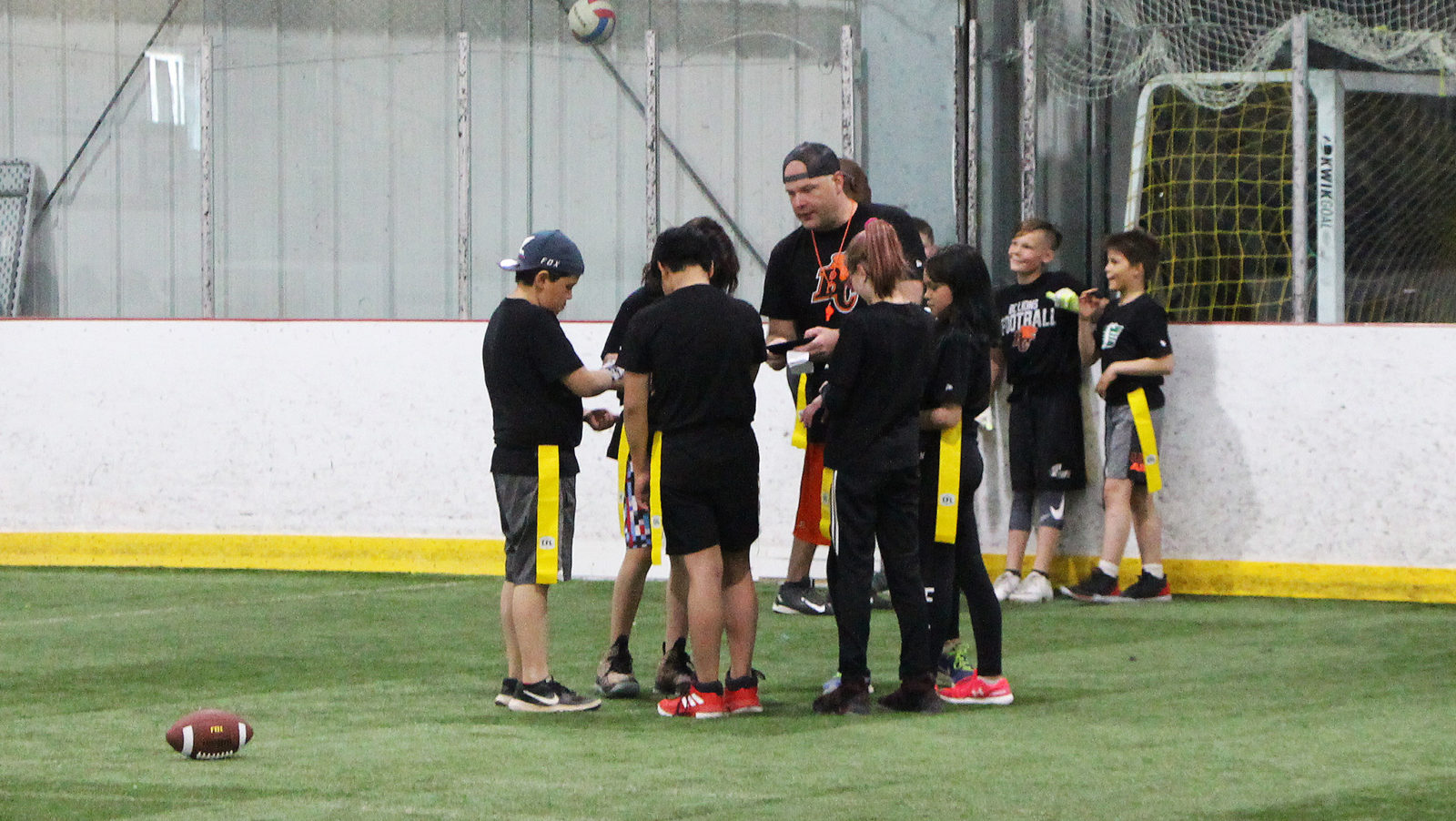 Scott Schutz pulled up in his rental truck to the front doors of the Arctic Winter Games arena in Iqaluit on the morning of Saturday, June 1. It was getting close to 10 a.m. and the sun had been up for almost eight hours, doing its best to push the mercury up over the 4C it sat at.

Schutz, 44, is no stranger to sport in Canada’s north. A hall of fame volleyball career at the University of Saskatchewan led to a coaching career, which opened the door to him crisscrossing some of the country’s most remote regions over the last eight years teaching and promoting volleyball. He lives in Kelowna, B.C. but is the program coordinator and a coach for Volleyball Nunavut, working with Recreation and Parks Association of Nunavut (RPAN).

He estimates he’s been to Nunavut 30 to 40 times over the years for volleyball. But Saturday was different and he was excited about that. He was here for football.

When Schutz isn’t travelling north for volleyball, he’s devoting himself to his other passion. He coaches a flag football team in Kelowna with his friends, Adam Witzel and Sherman Williams. Scott’s son Brady, Sherman’s son Dax and Adam’s son Chase all play on the team. All six of them were in Iqaluit to help Scott run the clinic, with the boys demonstrating drills and reffing games. 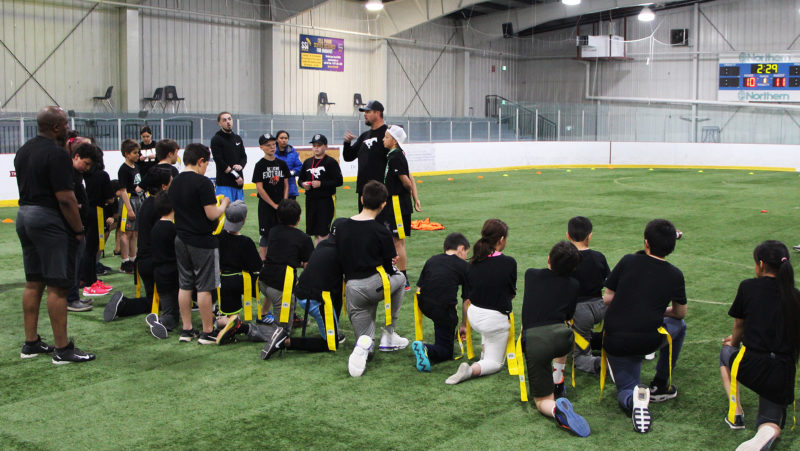 The group started on the Friday with school visits, introducing students to the game. Saturday was on-field teaching mixed with an on-the-fly coaches symposium that saw locals and representatives from five communities across Nunavut coming together to better learn the game and bring it back to their respective homes.

Schutz worked with Sport Nunavut to get the funding for the trip, with the CFL endorsing the application. The league provided presence at the clinic by sending its manager of football operations, Eric Noivo, to work with the coaches and help teach the kids the game.

“We cold-called the CFL and Eric gave me a call back, which was really nice,” Schutz said.

“I think they really jumped in when we said the CFL was interested as well.”

One of the first things that Schutz learned on these trips is that the north moves at its own pace. His final words to the kids on Friday — an under-14 group and an under-17 group — was that Saturday’s sessions would start at 9:50 the next morning and to be on time.

We walked into the arena around 9:40 and the lights were off over the artificial turf that replaces the hockey rink’s ice from May to September. There were just a couple of kids inside the building. By 10:15, the place was filling up with soon-to-be football players.

As the kids took in how to play the game, taking turns at quarterback, centre and receiver, learning how to call a play and how to play defence, you never know who will pick things up quickly and easily.

Ava Whitworth is the one during the Saturday session. A 12-year-old grade seven student at the middle school adjacent to the arena, it’s like puzzle pieces snapping together, her and football. By the end of the session, she’s aggressive on defence, snagging flags off of quarterbacks and making plays on offence. On Sunday, she ran almost the full length of the field for a touchdown in a game.

Toward the end of their game day on Sunday, Witzel points her out as one of the best players there and a natural at the game.

“It was really fun,” she said on Saturday. She wore a pair of receivers gloves, given to the top-three performers of the day.

“I think my favourite part was learning how to throw, stuff like that.”

It’s similar for Leetia Eegeesiak, a 13-year-old at the same middle school. Sports seem to come easy and playing co-ed is nothing new for her. She’s up against the boys in hockey, basketball and soccer, where she excels too (her favourite sport, for the record, is dog sledding).

If you’ve been around flag football, you see how adaptable and inclusive the sport is. Boys, girls, tall kids, short kids, every body type. Just about every kid on the field in Iqaluit had a moment over the weekend where they impacted the game. For small communities that can draw a limited amount of participants, it’s a perfect fit.

Basil Elvie grew up in Toronto and played high school football, then went on to play junior football for a year with the Burlington Braves. He’s lived in Iqaluit for three years and works for the Qulliq Energy Corp. With a population of about 7,700, it’s not hard to start to recognize faces around town once you’ve spent some time there. Elvie volunteered to coach through the weekend.

“I’m just trying to get kids more involved. I see a lot of kids out at night getting themselves into trouble,” he said.

“This is a good way to use their energy to not get themselves in trouble anymore.”

Once they got on the field, Elvie saw what football taught him through his life, too.

“You can find a perfect position to play and this game allows kids to have more fun with their friends, be more active, get more interpersonal skills, start playing with other kids and learning how to be on a team.

“Being on a team is such a great life skill to learn, just for joining the workforce. This is something that’s great for them to experience.”

“It’s the same thing for us in Kelowna,” Schutz said.

“Everyone’s mixed. Girls and guys, everyone’s different heights and the girls are always taller at a younger age.

“They learned so quickly, that’s amazing. (The coaches) were talking about how fast they’ve learned the game. We played full games (a day ahead of schedule) and that was great to see.”

“Being on a team is such a great life skill to learn, just for joining the workforce. This is something that’s great for them to experience.” 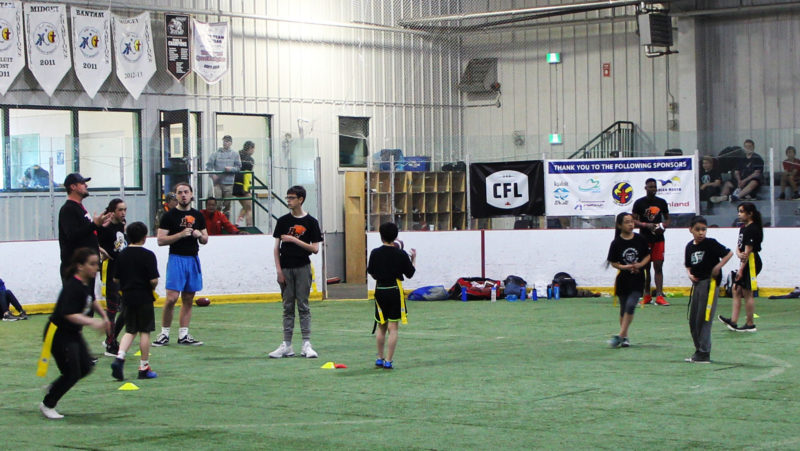 Kids participate in drills during the clinic (CFL.ca)

While the kids on the field were in football-sponge mode, many of the coaches were trying to absorb info in the same way. Representatives from Cambridge Bay (1,900 kms north of Saskatoon) and Rankin Inlet (1,100 kms west of Iqaluit) were among the visiting coaches at the clinic.

“I’d never liked football but now that I know the rules, I was watching it on TV (Saturday) night and I thought, ‘I actually like this,’” Alayna Ningeongen, a sports and recreation student from Rankin Inlet said, laughing.

She’ll teach flag football at three different camps in the area this summer. The clinic in Iqaluit reached about 350 kids through the Friday school visits. Schutz was hopeful that 500 more kids could be reached when the coaches return to their communities.

“It’s good being involved in the drills here,” Ningeongen said. “It sticks with you more than just reading it from a book.”

In bringing the clinic to Iqaluit, Schutz thought it was important to try to give the kids there some variety in their sports.

“I think we’ve seen a handful of youth out here that likes flag football. I think they’re falling in love with it.”

As the games wound down on Sunday, Schutz, Witzel and Williams spoke about the growth of the group and hoped that it could be the start of something. They said they’d talk with local coaches about at least trying to set up a semi-regular time during the summer to let these groups continue to learn the game and grow. The turf is only in for the summer at the rink and the weather, along with the grass-free terrain in Iqaluit makes for a small window to play the game.

“Volleyball Nunavut and RPAN are always looking for different ways to get kids going and I really like the game of flag football,” Schutz said.

“I think it’s something that a lot of kids should play young because it’s great for coordination, hand-eye, etc. and it’s just something different to do.

“I think it’s something that we can hopefully grow over the years. I knew they’d be excited about this sport and that’s something we saw over the last two days.”