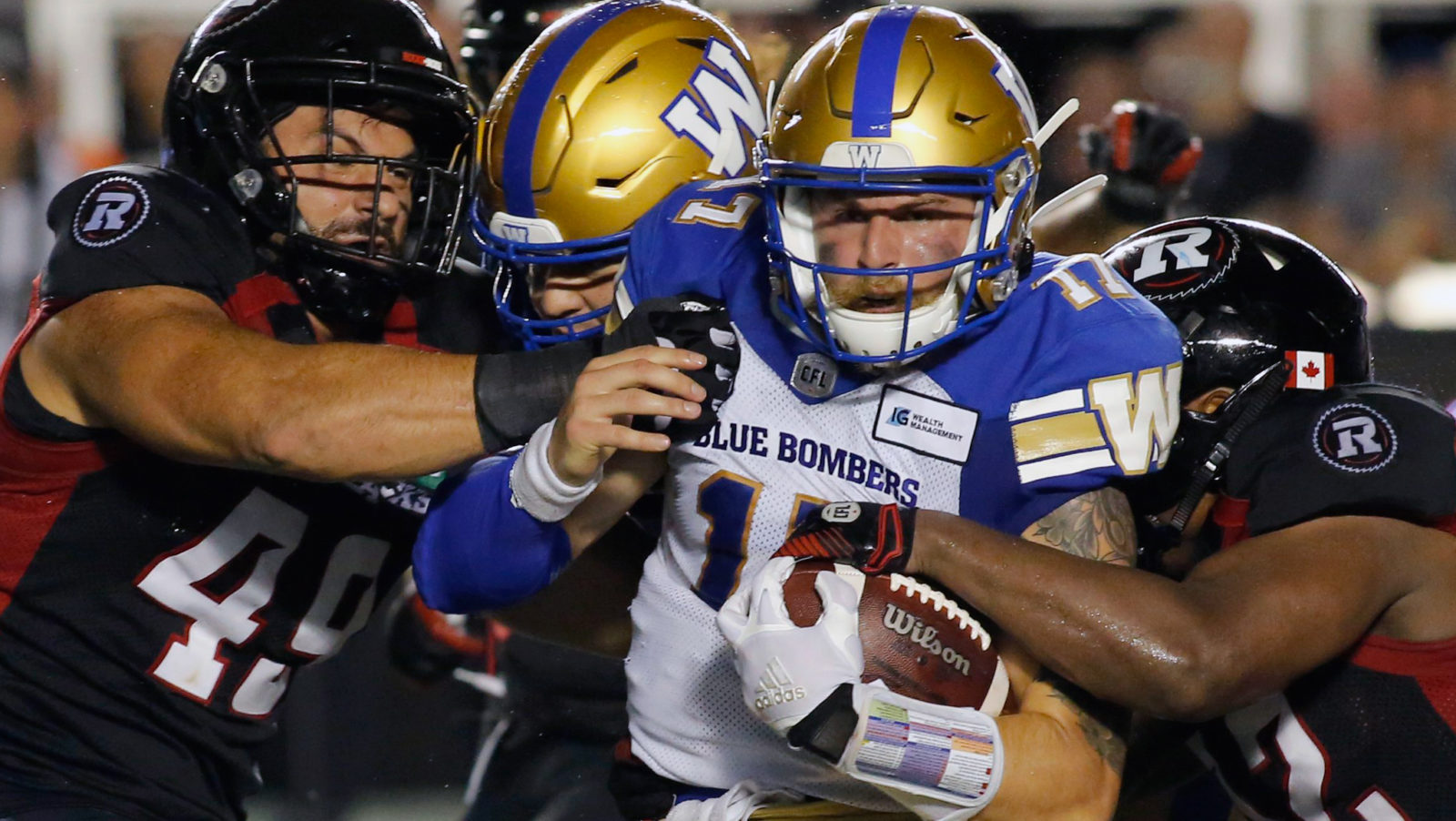 OTTAWA — With Matt Nichols sidelined and an 18-point lead nearly evapourated, there were plenty of reasons to fold the tent for the Winnipeg Blue Bombers on Friday night.

Instead, place kicker Justin Medlock chased down his own punt and knocked it out of bounds, and Chris Streveler scored his third touchdown of the night, helping the Blue and Gold put away the REDBLACKS in a 29-14 victory at Ottawa’s TD Place.

Receiver Chris Matthews left in the first half due to injury while Nichols exited in the third, but a little adversity couldn’t stop the Bombers from starting their season a perfect 3-0 in a game they never once trailed.

“It talks about our depth,” said Bombers head coach Mike O’Shea. “You’ll be hard pressed to ever hear me say that the guys in training camp aren’t starters. To me they’re all starters that are going to get their opportunity at some point because football’s a tough sport.”

“We’ve got a lot of depth,” echoed Nichols. “I’m proud of our guys. We came into a tough place against a tough team, a team that was 2-0, and we clawed and scratched and found a way to win.”

“It’s next man up, everyone in the locker-room knows that,” said receiver Nic Demski. “Nobody comes to practice every day of the week thinking they’re just a backup. They know that at any moment their number could get called and it shows.”

Nichols spoke to reporters after the game and said he felt fine, indicating there’s a chance he will play next week vs. Toronto. The Bombers’ quarterback connected on 16 of 20 passes for 262 yards and a touchdown before being injured in the third quarter. The injury, suffered to the head/neck area, occurred after an 18-yard run on a hit by REDBLACKS linebacker Kevin Brown.

While Streveler’s three touchdowns led the way, there were plenty of unlikely heroes for the Blue and Gold.

In the end, though, the play of the game may have been made by Medlock. After missing both his field goal attempts, Medlock chased his own punt and deflected it out of bounds at the Ottawa five-yard line, setting up the game-clinching touchdown from Streveler in the fourth quarter.

“I thought that’s the big one, right there,” said O’Shea. “Hit the ball, I think it went into the end zone and came out. Pops back out and he busts his ass down field and makes a great play. And I’m telling you, you guys ask me about turning points a lot — that one was massive and our team responded.”

“I saw the ball, I saw the returner didn’t want to catch the ball and I just kept running,” added Medlock. “That’s my job, go get the ball. It’s my job to go down there, if the ball’s on the ground go get it. It was a big point in the game, I’m glad I could come through for that.”

Drew Wolitarsky scored his third touchdown of the season and finished with five catches for 50 yards, while Demski recorded the first 100-yard game of his career, finishing with 105 yards on four catches. His 82-yard touchdown on the Bombers’ second offensive play set the tone.

“It was just a good play call,” said Demski. “I did what I had to do and Matt did what he had to do and we made it work. I ran as fast as I could and the rest was history.

“That’s what we like to do as an offence, we like to get explosive plays, we like to take shots when they’re available and when you execute and get them done, it feels pretty good.”

After amassing just under 24 minutes of possession in Week 3 vs. Edmonton, it was a different story for the Bombers on Friday. They controlled the ball for 39 minutes, racking up 26 first downs and 441 net yards.

“Overall I felt like we were moving the ball better this week,” said Nichols. “I felt every drive we were marching. I’m definitely happy with the offence moving the football. I thought we did some good things.”

Andrew Harris rushed for a game-high 80 yards on 18 carries, adding 50 more yards through the air.

Streveler threw for 42 yards on 6-of-8 passing in relief for the Bombers, though he was intercepted off a deflection. The REDBLACKS also scored on a fumble recovery by defensive back Jonathan Rose.

“Can’t say enough about how well they’re playing,” added Nichols. “I know first hand because I face them every day in practice. They’re playing great for us right now and I think tonight was a great back and forth between us in the defence where we’d get some momentum and score, and they’d get us the ball right back. It was a great team win.”

The Bombers will try to stay undefeated when they host the Argos on Friday, July 12.