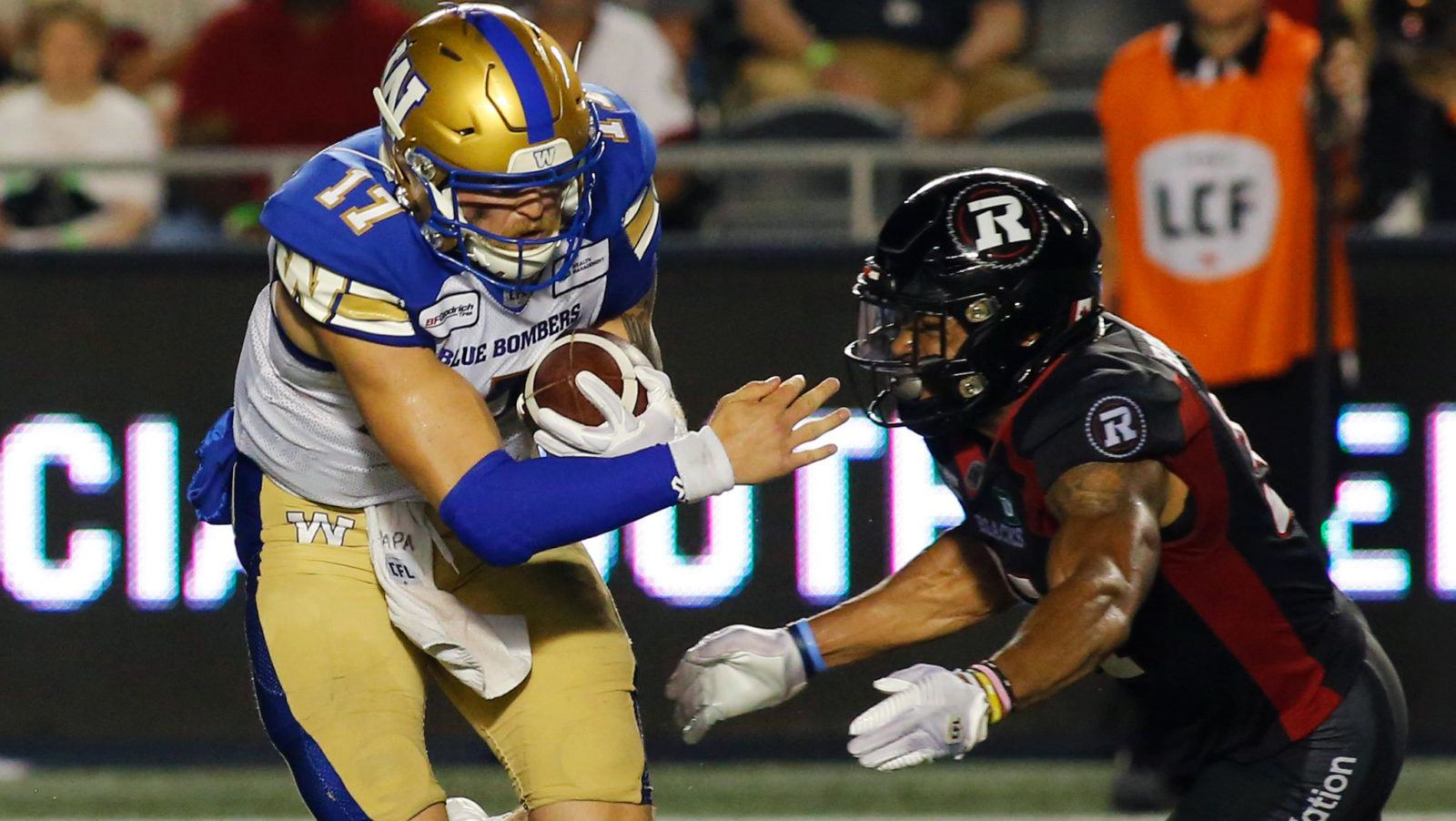 There is a big difference between the two and the Winnipeg Blue Bombers confirmed the former on Friday night against the Ottawa REDBLACKS.

A road win, with adversity in the form of Adam Bighill‘s injury and then losing quarterback Matt Nichols in the second half.

The undefeated Bombers were considered to be one of the best teams in the CFL going into the season but even they have said that it doesn’t matter what outsiders think until they show it on the field.

The Bombers are dangerous because they can beat you in different ways. Last week it was Lucky Whitehead breaking a game open with big plays. Nic Demski did the same early on Friday.

But when Nichols goes down, the Bombers ground game took over with 33 carries for 149 yards and dominating the time of possession.

The Bombers had the ball for nearly 40 of the game’s 60 minutes. That is almost unheard of in the CFL.

And when the REDBLACKS did have the ball, Dominique Davis and company struggled to gain any momentum. Whether it was Willie Jefferson wreaking havoc off the edge or Winston Rose picking up his first interception, the Bombers defence showed they are just as talented as the offensive side of the ball.

Some teams, I’d start to get worried about feeling too good about themselves and having a emotional lull. You maybe able to put that on the Tiger-Cats in their upset loss in Montreal this week.

But the Bombers have a sense of determination this season. Matt Nichols wants to prove that he can win the big game. After a disappointing loss in the Western Final and a lack of playoff success and the fact the organization hasn’t won a Grey Cup in nearly 30 years, how can this team start to rest easy?

Nichols injury has to have some holding their breath in Winnipeg but he told reporters after the game, he felt great and it was precautionary to take him out. We’ll see about that next week, but remember Chris Streveler got the Bombers off to a decent start last year and he’s another year older and clearly still able to move the ball with the weapons General Manager Kyle Walters has put around them.

For the REDBLACKS, you can chalk Friday’s loss up to lesson’s learned.

Davis is in his first year as a starter and the REDBLACKS are going to have to ride the waves of seeing him nearly perfect last week against Saskatchewan, to being made to look like the inexperienced quarterback he is from the Bombers.

Ottawa can also take something away that it was a one possession game until Justin Medlock‘s heads up play to scamper down field and knock the ball out of bounds, setting up the nail when Chris Streveler ran in his second touchdown of the game.

While Winnipeg is proving off-season prognosticators right to start the season, Ottawa is proving them wrong.

They may not be a contender but they definitely shouldn’t be into the pretender category when many had them in the non-factor category due to the losses of their starting quarterback, two star receivers, running back, left tackle and more losses on defence.

To think a blown coverage at the start of the game and a punt return gone wrong in the latter stages of the game were the difference in a game that had the potential to be a lot closer than the score may indicate.

Can Ottawa say, ‘we belong with the Bombers’, yet. No. But the gap isn’t too far off.

If the REDBLACKS clean up those things, with the way the East Division is shaking out early this season, they’re on the road to another home playoff game.

These two teams meet again in two weeks when the REDBLACKS visit IG Field in Winnipeg. It’ll be their last meeting of the season.

Ottawa will want to show they are closing the gap with league’s current best team and have us thinking there could be a chance of a third game between these teams in Calgary come November.