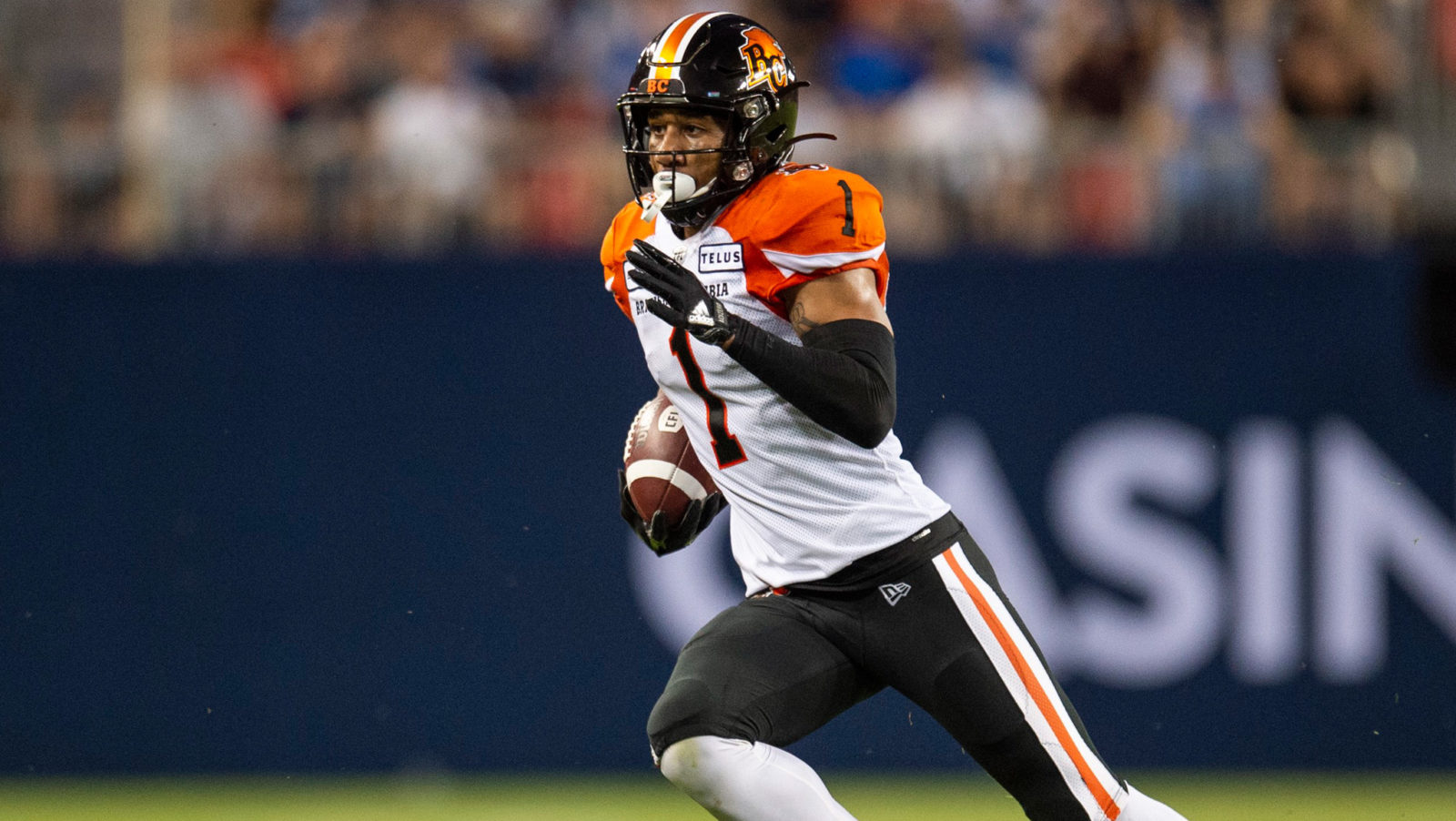 Hello, all you defensive linemen who dramatically and frantically point at an offensive lineman who’s flinched. Hey, man, no one likes a tattletale.

Did you think the Calgary Stampeders were in trouble because Bo was out and they had to go with a relatively inexperienced newish guy?

Then you’ve arrived late to the story of the Calgary Stampeders. You should really go back and binge their earlier episodes and catch up.

All the Stampeders do is replace guys with competent people – sometimes better – and have been doing that for years. Whatever position.

If Nick Arbuckle’s comeback heroics against BC in Week 3 had you thinking “yeah, well, the Lions didn’t have film on him, really, so….” Well, that was fair enough. Arbuckle, though, survived the madhouse at Mosaic as well as a pretty good defence that knew he was coming.

However, his side-arm sling to Markeith Ambles while on the move and under pressure… his Ricky Ray-like corner route toss to Michael Klukas… his nimble-minded shovel to Ante Milanovic-Litre… his smooth-sailing bomb to Reggie Begelton… all of that suggests that Arbuckle can be the guy to steer the Stamps’ offence well until Mitchell returns.

They’ve done it, again, folks. Found another one.

BONUS TAKEAWAY: Running back, Ka’Deem Carey is also an example of the Stamps finding another one.

BONUS BONUS TAKEAWAY: Linebacker Nate Holley is also an example of the Stamps finding another one.

2. I HEAR A SYMPHONY

Not all touchdown runs are created equal.

William Stanback’s epic, 21-yard opus, late in the fourth quarter of the Alouettes’ win over Hamilton, was one of those unequal ones.

First, he runs smack dab into the back of teammate Luc Brodeur-Jourdain, who was systematically manhandling a charging Simoni Lawrence (nice final night, LBJ). Kicking it to his left, he outruns two Ticat defenders to the edge and then finds even more velocity, gearing down only to deke perfectly around a block (great work on Frankie Williams, Quan Bray).

Then, just inside the ten yard line, he pulls a fluid hurdle move over Richard Leonard and goes airborne at the three, diving past Rico Murray. He signs the whole damn thing with a flourish by reaching out and ramming the ball into the pylon.

People like to match highlights up with famous songs these days – Celine Dion’s Love Theme From Titanic being the most prevalent – but I’d suggest that William Stanback’s touchdown run deserves more than that.

It’s own, original score is appropriate, one that’s laid down by the Montreal Symphony Orchestra. With a lofty string arrangement, majestic French Horn stabs and a thundering kettle drum to bring it home.

Yeah, sure. Throw in Celine for good measure too.

BONUS TAKEAWAY: The Alouettes’ offensive line has been derided greatly over the last couple of years (earned). It’s fair, then, that the unit get some love when it performs as well as it did against Hamilton. A good running game can help an O-line, for certain. But it is also true that some of Stanback’s impressive rushes on the night came with Montreal’s offensive linemen providing him with great holes up the gut that he could use as blast-off pads.

3. THERE’S NO SUBSTITUTE FOR HUSTLE

Here’s to special teams demon Mike Miller, for my money, probably the most underrated player in the CFL.

For nine years – first with Edmonton and now with Winnipeg – he has been jetting downfield on kicks and seeking to defuse the opponent’s return game with great prejudice. And doing it so well.

He tied the single-game record for special teams tackles in the Bombers’ win over the REDBLACKS, with seven, bringing his career total to 168.

Guys like Miller don’t get enough credit for what they do and Miller’s amazing night in Ottawa means this seems like a good time to renew my yearly request that there be an award created for special teams tacklers. Or how about an all-star spot?

Sure, downfield tacklers can earn Outstanding Special Teams Player nominations but they rarely get past the team stage, with returners and kickers almost always representing both the East and West divisions, year after year. No cover guy has ever won the award (it was introduced in 1999) and only two of them have ever reached the final two nominees (BC’s Jason Arakgi in 2009 and Hamilton’s Marc Beswick in 2013).

While a few cover team aces have been named West or East All Stars, none has ever beaten a returner to be named a league-wide All Star and special teams All Star spots have been awarded since 1986.

If the voters can’t or won’t see what coaches, general managers and teammates see – which is just how critically important downfield wrecking balls are to a team’s success – why don’t we make it easier for them?

Give these noble warriors a category to call their own and bring the dark arts of downfield coverage into the light.

Right now, Mike Miller would be leading the pack for consideration. Again.

4. THERE IS, HOWEVER, A SUBSTITUTE FOR RECKLESSNESS

Winnipeg quarterback Matt Nichols cannot be doing that kind of stuff. The good thing is he knows it.

“It’s just dumb by me,” he said after the Blue Bombers had put the finishing touches on their win in Ottawa, with their QB1 in civvies. “I know better than that.”

That Nichols pulled the ball down when he spied a hole up the middle and then took off through it is not the issue here. Surprise is a great tactic and when a quarterback not known for his sprinting abilities sees a chance to easily convert to a new set of downs with a run, he ought to take it on occasion.

But not hitting the deck when a blur of Ottawa players started to converge on him was not what you’d call the right decision to make, knowing his own personal injury history. Nichols didn’t need more yards and the Bombers don’t need him missing action if it can be helped.

“I’ve gotta make sure I don’t take unnecessary hits like that,” said Nichols.

So slide, Matty, slide. Get down. Get down like it’s disco night at the legion.

BONUS TAKEAWAY: Wanna know how to execute a great slide? Justin Medlock is the man. A beauty, that was, on his recovered punt. A hook slide to make a major league baseball player envious. Who knew kickers were so good with their knees, too?

5. IT’S NOT EASY BEING BRYAN BURNHAM

Sure, he makes it look easy. But it’s not, apparently.

The BC Lions were without their linchpin receiver in Toronto, with Burnham on the injured list for the game.

Because of that, Lemar Durant was asked to take over Burnham’s spot – and his responsibilities – for the game against the Argonauts.

“I didn’t know exactly how much he has to do, game in and game out,” said Durant, with a smile and a little head shake, moments after the Lions had eked out an 18-17 win.

Well, now he knows. And despite not being perfectly pleased with his efforts – “I got a lot I’ve got to clean up, personally. I had some mistakes,” Durant said – he fit the bill pretty nicely.

Durant had a fine night, and it’s looking more and more like you can pencil him in as a contender to watch when it comes to the Outstanding Canadian Award in 2019.

He had Burnham-style numbers, with nine catches for 125 yards and a touchdown, with an especially Burnham-like moment coming late in the fourth quarter, as he dove to make a clutch second-and-long catch, the Lions trapped deep in their own territory.

BONUS TAKEAWAY: The pooch kick is not a thing you’ll be seeing the Argos doing again any time soon.

AND FINALLY… I predict Lewis Ward will retire at the age of 76, having kicked 2,248 consecutive field goals. All with Ottawa.