Accuracy Grades: Who was on target in Week 4? 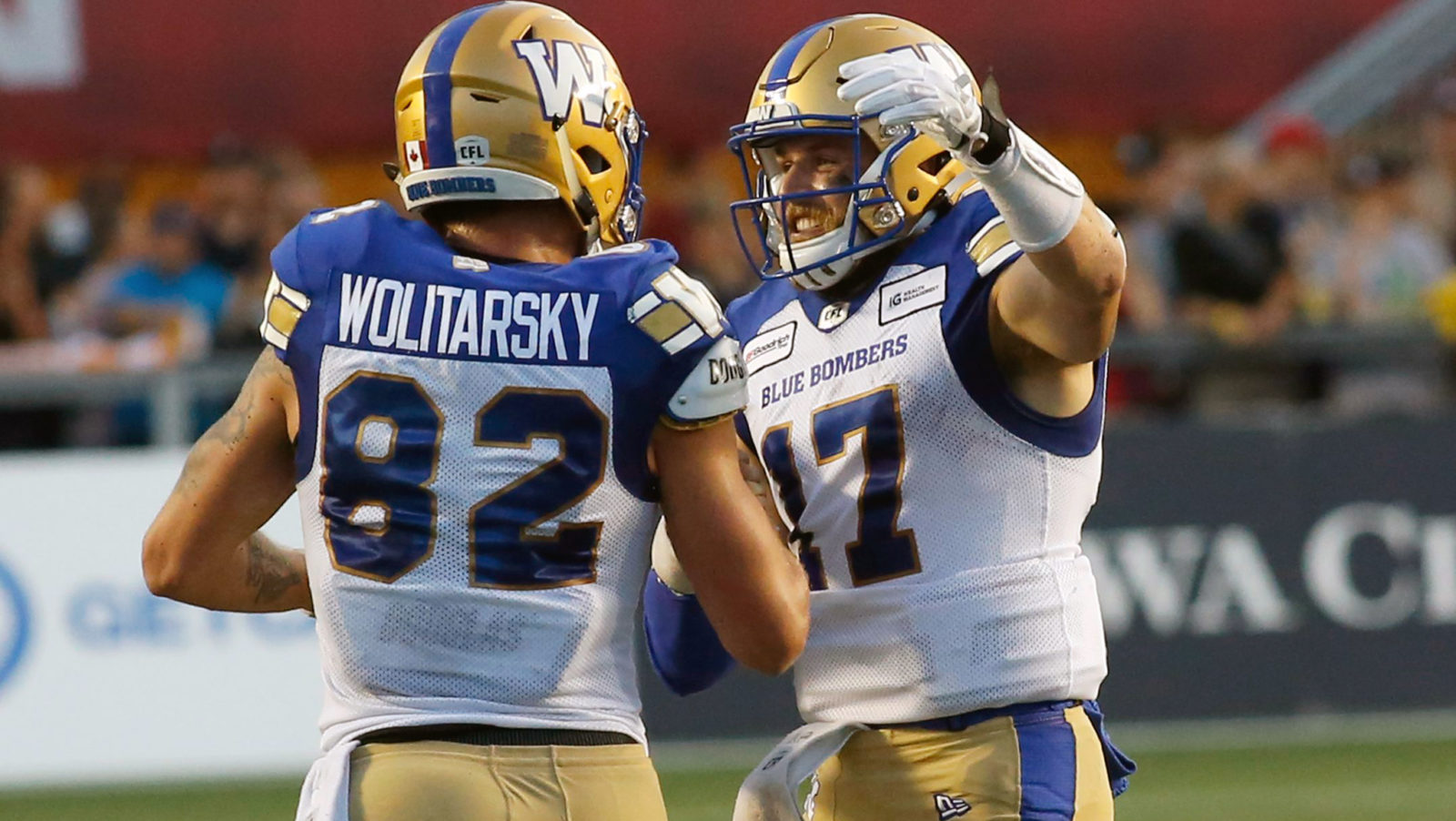 Accuracy Grades: Who was on target in Week 4?

A full month into the CFL season and we have yet ANOTHER new leader at the top of 2019’s accuracy big board. He comes from a team you might expect great quarterback play from, but it isn’t the name you have come to know and love.

More on that in a minute but first let’s look at Week 4: 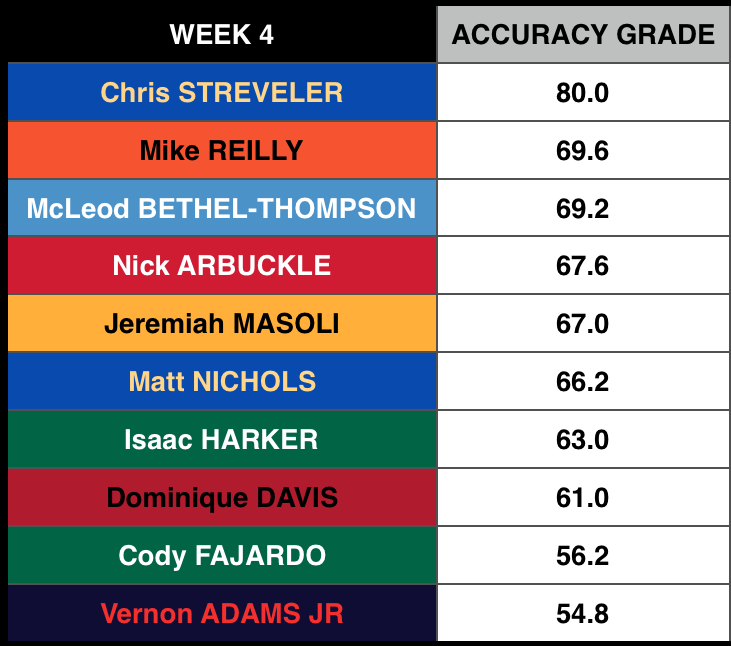 Despite getting the win Thursday against Hamilton, Vernon Adams Jr. brings up the back of the field in Week 4 after leaning heavily on the standout performer of the week in his backfield partner William Stanback.

After having a duel for the ages that came out of nowhere it appears both Dominique Davis of the Ottawa REDBLACKS and Saskatchewan Roughriders starter Cody Fajardo have hit a speed bump in their 2019 campaigns, with both landing in the bottom half of the Week 4 field. The more disappointing of the two being Davis, who came off a bye with the REDBLACKS but did have to face arguably the CFL’s best defensive unit in Winnipeg.

Matt Nichols, Jeremiah Masoli and Nick Arbuckle rounded out the middle of the pack as Nichols made a variety of spectacular throws which were offset by dangerous tosses down the middle before being forced to leave the game Friday on a dangerously tardy slide into a train wreck of defenders and teammates. 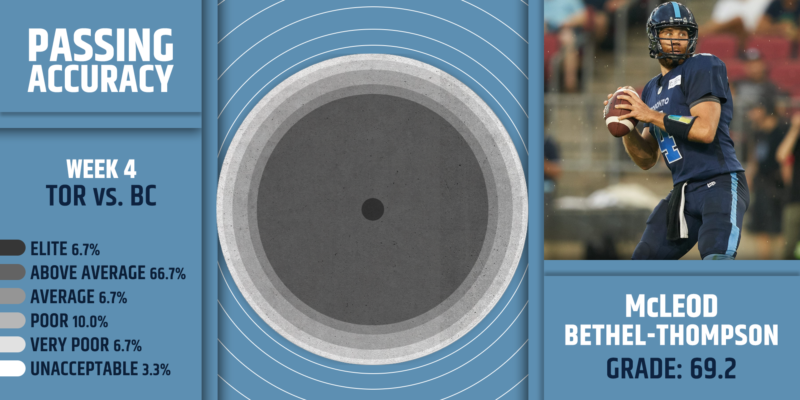 For the Argos the toss up between James Franklin and McLeod Bethel-Thompson over the last two seasons has been a precarious one. In Week 4 it was MacBeth getting the call as Franklin headed to the injured list and he performed despite a tough loss at home against the Lions. 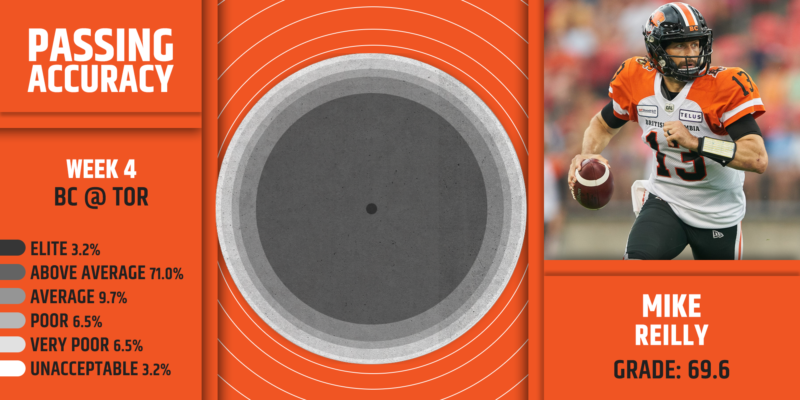 Reilly and Bethel-Thompson posted spectacularly similar games Saturday at BMO Field which might explain why the game came down to nothing more than a heel on the end line separating the two teams.

This is Reilly’s second straight week posting the second best accuracy grade of the week and his third top three-finish of the first four weeks. As the Lions’ run/pass balance continues to level off Reilly becomes increasingly effective on better down and distances and continues to shred defences on second down with pin point passing, taking what defences give him. 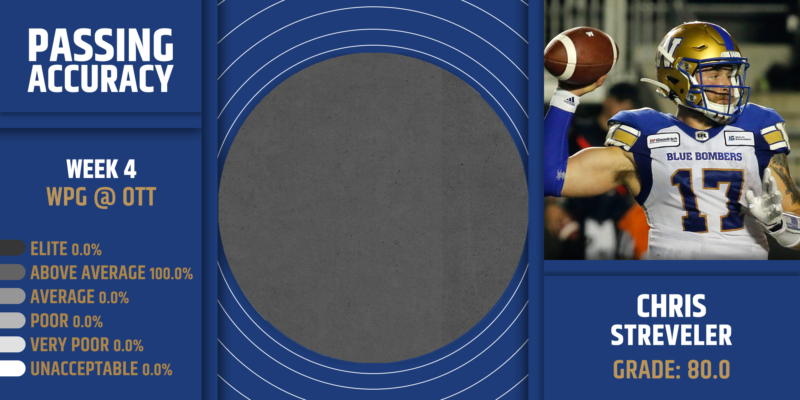 Streveler answered the bell in relief duty just like Nick Arbuckle did for Calgary a week earlier, albeit with an interception on a ball batted into the air and a knocked down. The other six completions all registered as above average on the grading scale, giving Streveler a podium place for Week 4.

Streveler qualified for the weekly honour after attempting more than the minimum requirement of team passes attempted (20%).

Here is a look at the up to date 2019 season standings. 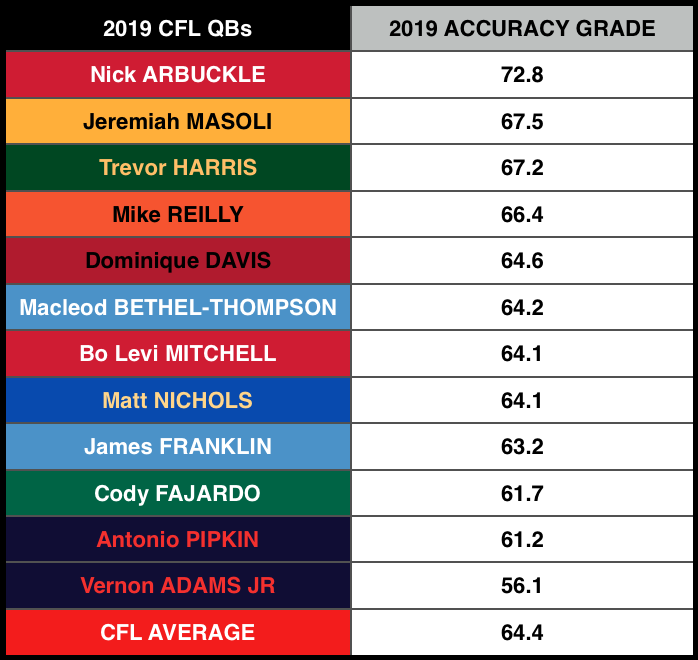 Bo Levi’s replacement has graded out higher on a throw to throw basis than any quarterback in the CFL so far through four weeks. He’s completed 90 per cent of his passes on just 31 attempts and has 111 less attempts to grade than Mike Reilly, but continues to show well for the Stamps with a Steeltown showdown against the Ticats coming Saturday night.