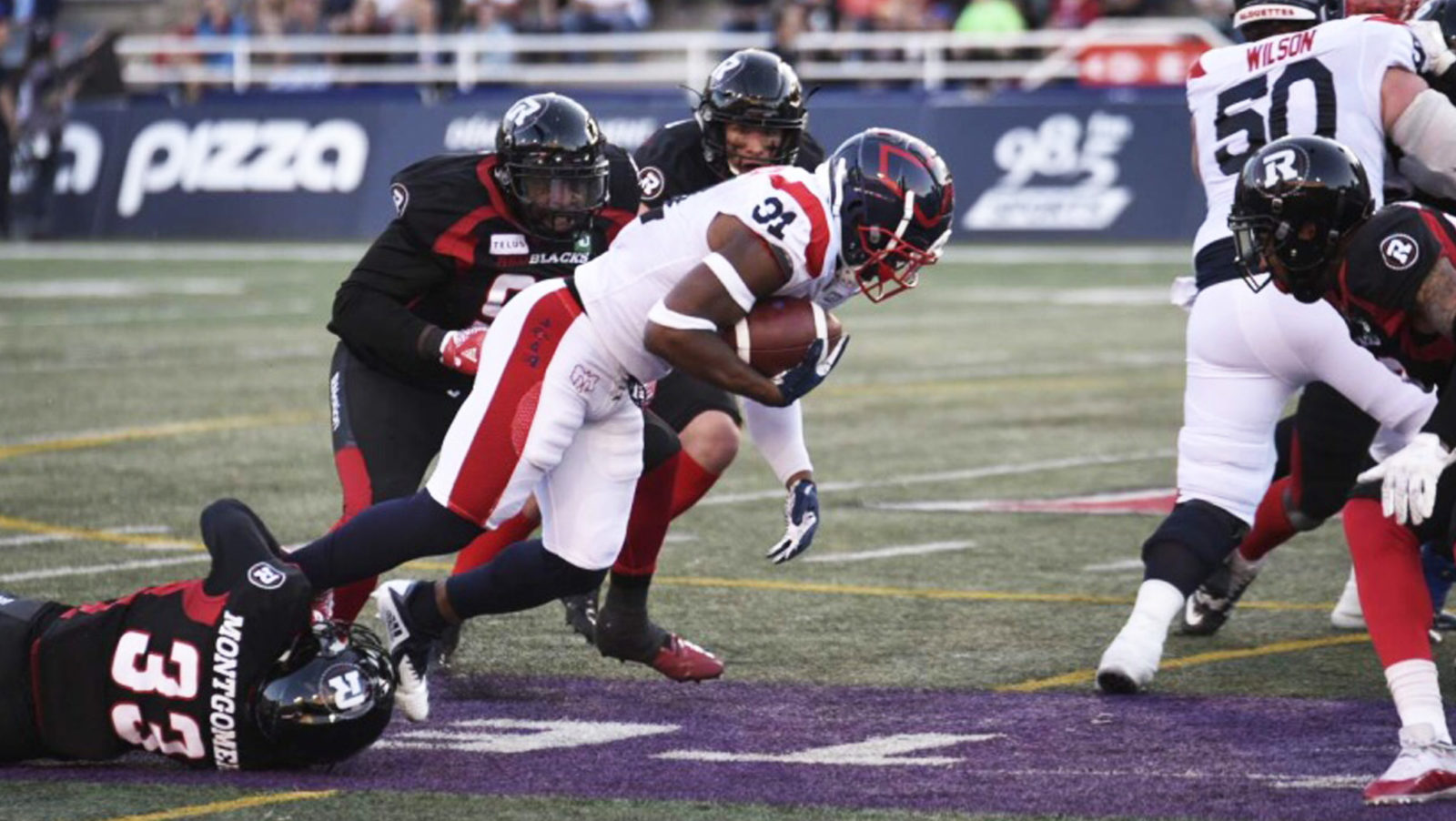 The Alouettes were supposed to be a joke. No proven quarterback, a head coach change late in the preseason, ownership fluctuation and a variety of ill-timed injuries.

They battled back on the road against a damn good Eskimos squad in Week 1 and found a way to correct their faults in a Week 4 bounce-back win against Hamilton.

Ottawa was the butt of many off-season jokes thanks to their losses in free agency, which included 60% of their targets from 2018 in Greg Ellingson, Diontae Spencer and William Powell not to mention the trigger man Trevor Harris and his personal protector SirVincent Rogers.

Add in Jamie Elizondo’s unfortunate departure, the lack of a true – by name – offensive coordinator and handing the keys to a quarterback many thought would remain a career backup and you had a formula for disaster. 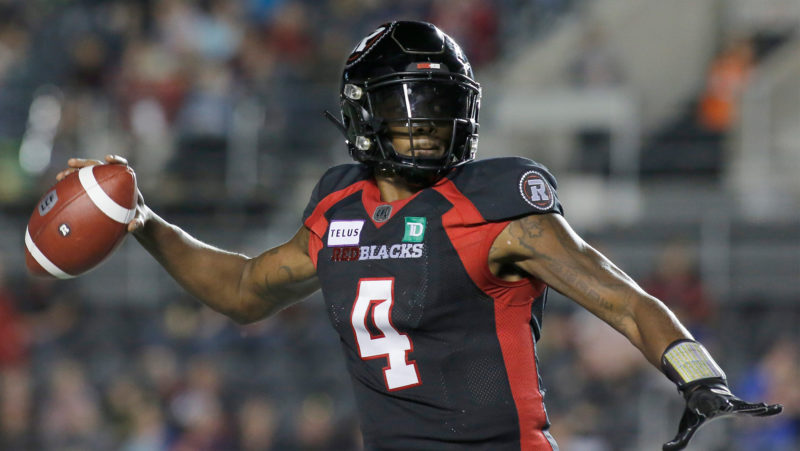 All they did was start the season with the rarest of road victories by taking down the Stampeders in Calgary, followed by a statement victory against another West division squad when the Riders came to town.

After a down week against the Bombers, Ottawa is ready to play host to the Alouettes in what has quickly becoming a more intriguing matchup than anyone would have predicted just a month ago.

Adding fuel to the fire is the quarterback matchup. Everybody loves a good reclamation project story, and the two arms on display Saturday afternoon in Ottawa certainly fit the criteria.

Both Montreal’s Vernon Adams Jr. and Ottawa’s Dominique Davis took somewhat non-traditional routes to CFL starting quarterback, beginning with bounces off the junior college, small school and multiple division one walls before being passed around to several CFL teams without being given a true opportunity to take the keys and run with a starting job for more than a couple weeks.

That all changed in 2019, when Trevor Harris left Ottawa for greener and more golden pastures and a Week 1 injury to Antonio Pipkin allowed Adams Jr. to accept the role. The question now before this all-important Week 5 matchup becomes: how do these two quarterbacks compare and who has the advantage at the games most crucial position? 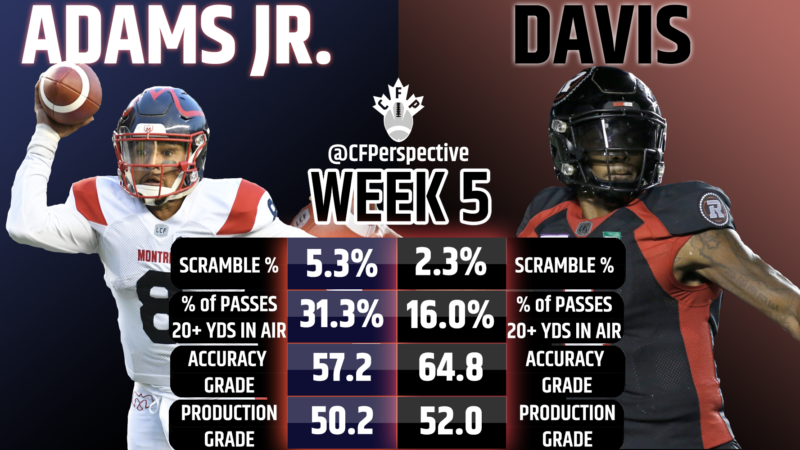 Adams Jr. has been much more likely to take off and run thus far in 2019 as Davis has used ball fakes and pocket movement more to his advantage. The great surprise for me based on watching the games live was the percentage of Adams passes travelling 20+ yards downfield in the air vs. Davis’ same number but that largely comes from the massive disparity in offensive snaps taken as Ottawa have in their first two games dominated time of possession.

Both teams feature a varied group of receivers that have come together quickly with their respective passer. Let’s start by taking a look at the top three receivers for Adams and the Alouettes. 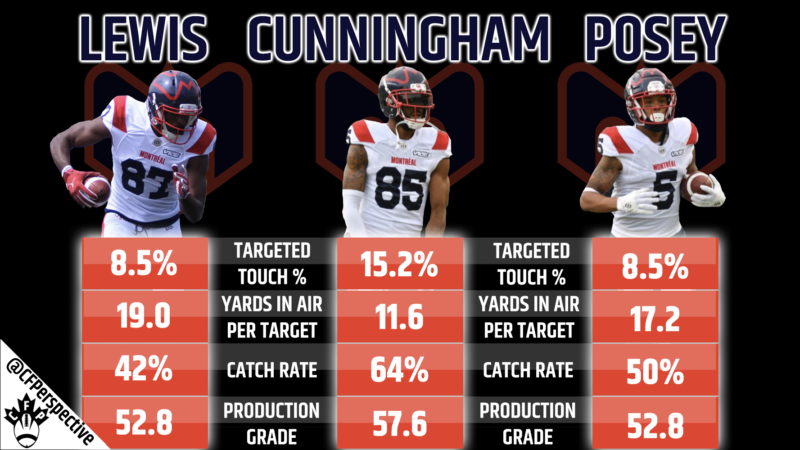 BJ Cunningham has become the every down threat, while DeVier Posey — acquired in free agency — remains the downfield threat he was in Toronto and BC. Eugene Lewis’ yards in air per target are way above the rest of his teammates, but the truth remains that Montreal is at their best when targeting Cunningham in tandem with a solid ground attack. 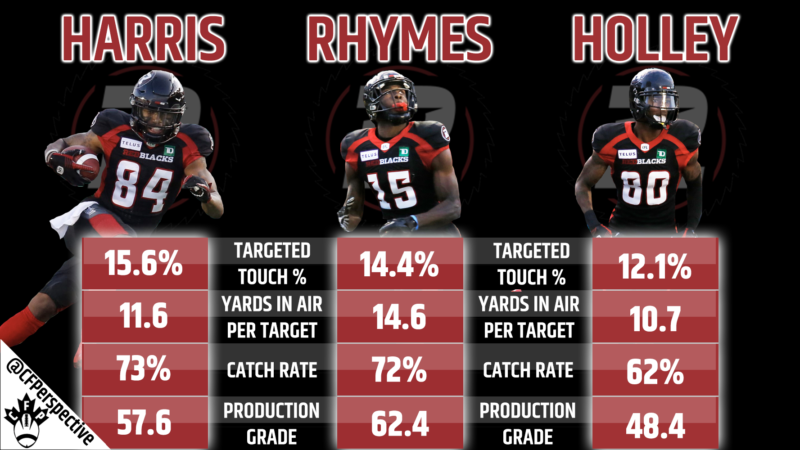 As for Ottawa, the biggest story might be the decline of production for Brad Sinopoli so far. That has to change as the year goes on, but for now it’s the three-headed monster of Rhymes, Harris and Holley leading the REDBLACKS in targeted touches for receivers with all three posting relatively similar numbers but Rhymes being the most productive pass catcher.

Working in the backfield with Davis and Adams Jr. are a pair or dynamic backs who at points this season have carried their teams to unexpected victories. 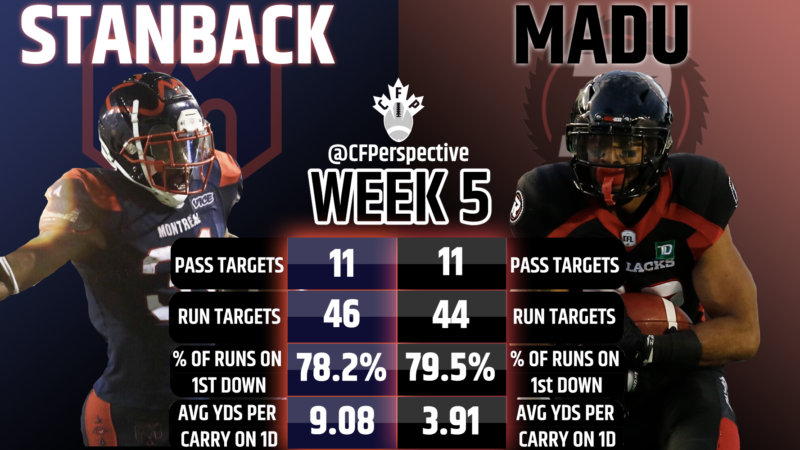 Madu and Stanback have posted almost identical usage numbers so far this season, but it’s the production of Stanback on first down that has created separation between the two.

Either man could steal the show Saturday in Ottawa, and while I picked the Redblacks to control the game’s tempo and get back in the win column, if William Stanback can produce like he has so far this year on the ground with first down carries all bets are off and Montreal could send another shockwave throughout the CFL.