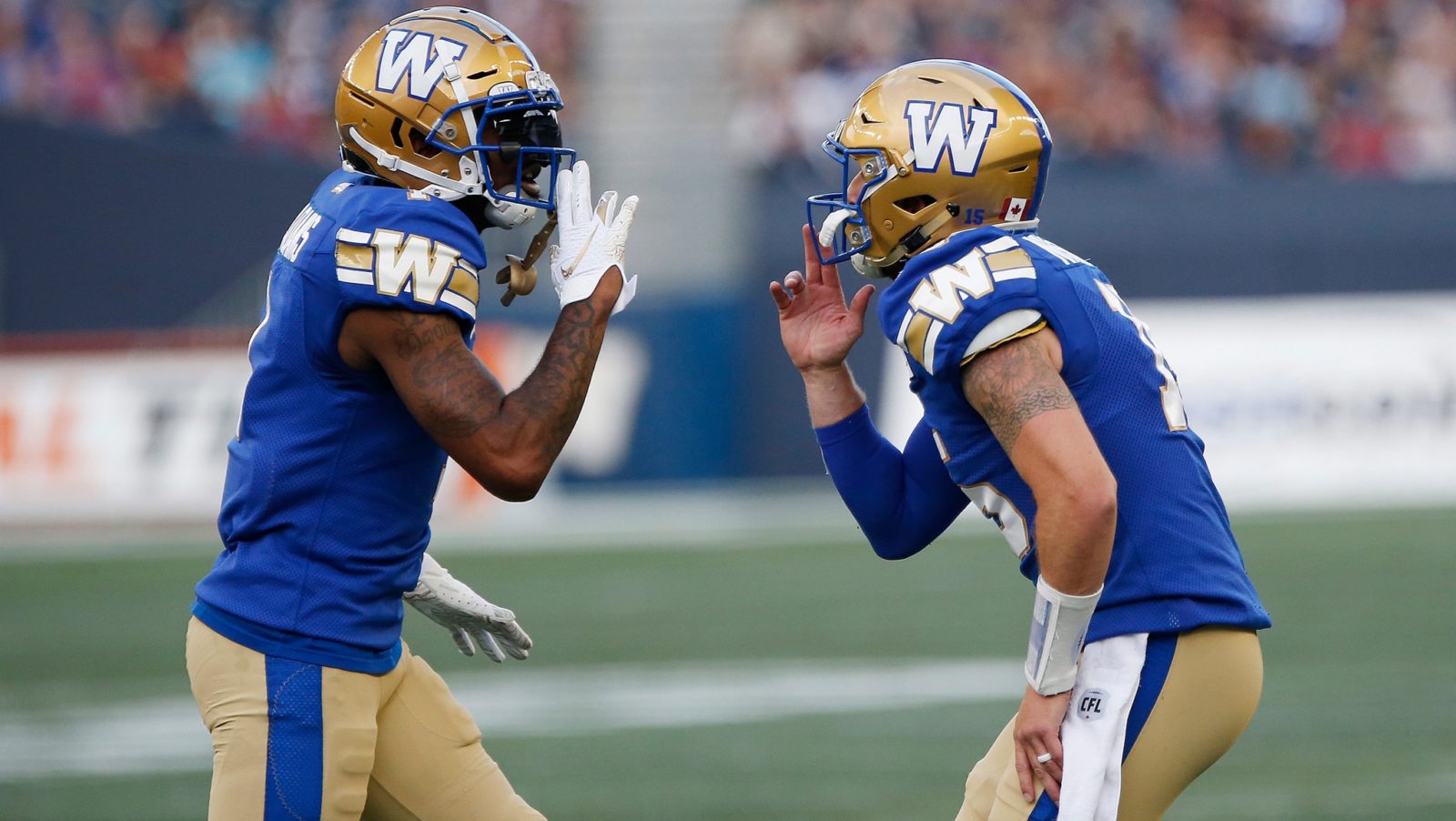 Two big special teams returns in the opening five minutes created a wave of momentum for the Bombers, including an incredible 104-yard opening kickoff return touchdown from Lucky Whitehead. Winnipeg’s sharp offence and stingy defence took care of the rest.

Nichols led the Bombers with an efficient passing performance, completing 18 of 24 passes for 209 yards and the three scores. Bombers’ running back Andrew Harris surpassed 8,000 career rushing yards in the win by gaining 116 yards on 14 carries. Harris also added a receiving touchdown.

Receiver Derel Walker had his biggest game as an Argo with nine catches for 188 yards and two touchdowns, and Argos quarterback McLeod Bethel-Thompson passed for a career-high 388 yards and three touchdowns in the loss.

Defensive back Winston Rose and linebacker Kyrie Wilson both notched interceptions for Winnipeg, and the defence also added a pair of sacks, two fumble recoveries and a key goal line stand.

RELATED
» Bombers show they can win in variety of ways
» Watch: Bombers begin with a bang
» By the Numbers: View Boxscore
» Images: Argonauts at Blue Bombers

Winnipeg established momentum right away in this one, with Whitehead returning the opening kickoff 104 yards for a highlight-reel touchdown. Whitehead went untouched as he used speed and vision to reach the end zone in front of the roaring home crowd. Medlock added the convert to give the team an early 7-0 lead.

The Bombers turned another big return into points shortly after when Charles Nelson’s spectacular 81-yard punt return set up a short four-yard touchdown toss from Nichols to Harris. Medlock added the extra point to put the Bombers up 14-0.

Toronto’s defence came up with a big play in the opening quarter when linebacker Ian Wild forced a fumble on Kenny Lawler after the receiver notched a big gain, but the Argos’ offence was unable to capitalize on the turnover and could not find an answer for Winnipeg’s strong defence.

Nichols’ first big pass of the night came with just under five minutes to go in the opening frame, as the quarterback stood tall while taking a hit and threw a perfect 38-yard touchdown strike to receiver Darvin Adams down the right side of the field. Medlock knocked the extra point through to give Winnipeg a 21-0 advantage.

The Bombers’ impressive defence stood strong once again when Winston Rose shut down a promising Argos drive by picking off Bethel-Thompson in the end zone as the quarterback attempted to get a pass to Walker. The interception was Rose’s second of the season.

Costly mistakes continued to hurt Toronto to start the second quarter when a dropped pass resulted in an interception for Winnipeg’s Kyrie Wilson. The quick turnover prevented the Argos from getting anything going on offence once again.

Nichols and the Bombers’ passing attack kept firing on all cylinders after that, as the quarterback chucked an accurate deep pass to receiver Nic Demski for a 67-yard touchdown. Nichols hit Demski in stride with the precise pass as the receiver accelerated up the field for the score. Medlock added the extra point to make it a 28-0 ball game. Nichols completed 11 of 14 passes in the first half.

The Bombers extended their lead later in the second quarter with a 22-yard field goal from Medlock.

Toronto managed to get on the board before half time when Bethel-Thompson zipped a 31-yard touchdown pass to Walker, the receiver’s first score as an Argo. But Tyler Crapigna missed the convert kick to the left, leaving the score at 31-6.

Medlock showed off his leg strength by kicking a 52-yard field goal with just over two minutes to go in the half, and Winnipeg’s dominant defensive front helped get the ball back to set up another scoring opportunity for the offence before the half. This time it was Harris’ chance to shine, and the running back made the most of the moment by breaking free for a 52-yard gallop.

Harris surpassed 8,000 career rushing yards on the play, and Medlock took advantage of the field position by adding a 13-yard field goal before half time.

The Bombers’ defence notched another turnover to start the second half when Argos running back Brandon Burks was stripped while fighting for a first down, but Medlock’s 48-yard field goal attempt ended up coming up just short.

The Argos took advantage of the opportunity with Bethel-Thompson throwing his second touchdown pass of the night on a 55-yard strike to receiver Armanti Edwards. Toronto’s ensuing two-point convert attempt failed, leaving the score at 37-12.

Winnipeg extended its lead later in the third with a 31-yard field goal from Medlock. The field goal was set up by a 20-yard Adams catch and an 11-yard Harris run.

But Walker came through with another big catch for Toronto after that when Bethel-Thompson found the receiver deep down the field for a 44-yard touchdown. Walker ran a brilliant route and turned on the jets to beat defensive back Chandler Fenner for the score. Crapigna added the extra point to make the score 40-19.

The Bombers added a single point to their total in the fourth quarter off a 65-yard Medlock punt, and Winnipeg’s defence had an impressive goal line stand led by defensive end Willie Jefferson with under three minutes to play to deny the Argos’ offence.

Backup quarterback Chris Streveler added a 23-yard touchdown run with under a minute left to seal the 48-21 victory for Winnipeg.

The Toronto Argonauts will face the Calgary Stampeders on the road next Thursday, and the undefeated Winnipeg Blue Bombers will face the Ottawa REDBLACKS again when they host them next Friday night in Week 6 action.