Steinberg’s MMQB: No easy path for the Alouettes 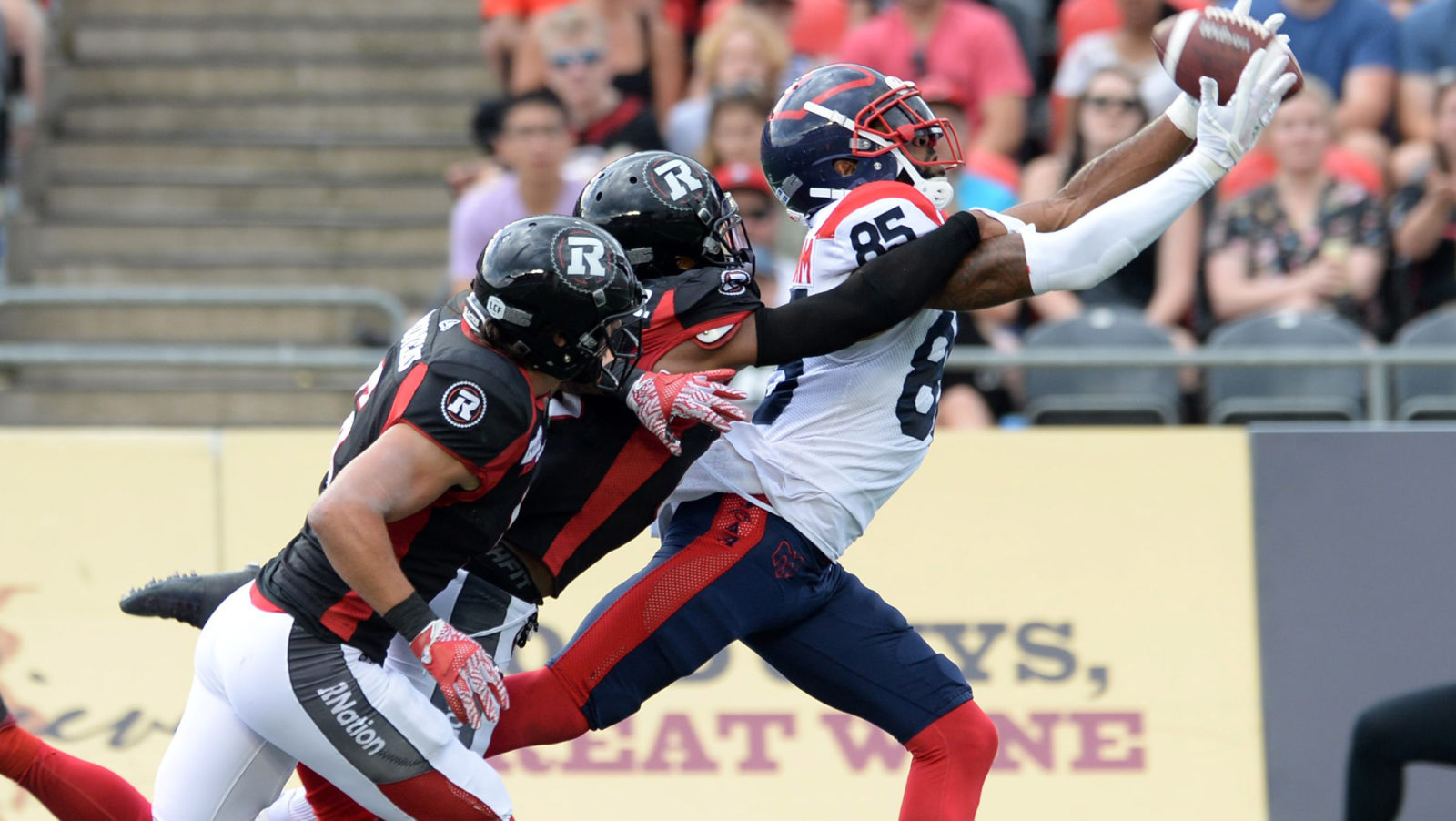 Steinberg’s MMQB: No easy path for the Alouettes

If the Montreal Alouettes return to the playoffs for the first time in five years this fall, it’ll be one of the most arduous roads traveled to a post-season berth.

Montreal’s 2019 season is only four games old and they’ve already endured a season’s worth of drama. To say the players in that locker room have been on a roller coaster ride would be an understatement. Yet here they are at 2-2 with more potential than we’ve seen in a long, long time.

This road for the Als hit another massive bump on Sunday with the shocking firing of General Manager Kavis Reed. The decision was announced about 24 hours after a second consecutive victory for Montreal and one of the team’s most promising performances in recent memory. Over the last month-and-a-half, bumps have become par for the course in Montreal.

Remember, it was only about six weeks ago when the Alouettes dismissed head coach Mike Sherman on the eve of their regular season. While the promotion of Khari Jones as Sherman’s replacement was a silver lining, it’s tough to spin how firing a head coach that close to the season is a positive.

Along the way, Montreal had opening night quarterback Antonio Pipkin go down three quarters into his 2019 debut. Then, a few weeks later, mainstay Luc Broudeur-Jourdain stepped away from the team’s offensive line. Yep, it has definitely been tumultuous, but somehow the Als are keeping their head above water. And, despite this latest obstacle on their road back to the playoffs, Montreal looks poised for more success.

The Alouettes have lots going for them right now, starting with their head coach. Firing Sherman probably set the team back a few weeks early on, but Jones looks like the right man for the job. After 10 years as a quarterbacks coach and an offensive coordinator, Jones was ready to take the next step. Sure, it didn’t happen in the most ideal way, but he’s still making the most of his opportunity.

What we’re seeing from Vernon Adams Jr. at quarterback is promising, too. I’ve been very much in the “wait and see” camp with Adams to start the season, but he blew the doors off Ottawa on Saturday afternoon. Adams was dynamite in leading Montreal to a 36-19 win on the road and he showed all of what makes him so exciting.

Adams has an incredible ability to throw with a ton of power while on the run, and we saw that multiple times against the REDBLACKS. His third quarter hookup with Quan Bray was the best example of that, but it was the only time Adams threw on the run. We saw arm strength, speed, accuracy, and explosiveness from Adams and he has Als fans hoping their quarterback drought might be over.

And don’t forget about William Stanback, because he’s a bona fide superstar in this league. Montreal’s starting tailback ran for another 100 yards on Saturday and has set an early pace we haven’t seen in about half a decade. With his ability to catch the ball out of the backfield, Stanback is one of the two or three most dangerous weapons in the league right now.

I’ll be perfectly honest; had you told me Montreal would fire their head coach and general manager, and lose their week one starting quarterback In the span of four games, I’d have told you they were destined for another difficult season. The exact opposite has happened, however, and the buzz surrounding the Alouettes is palpable ahead of this weekend’s home date against Edmonton.

Sure, Montreal has traveled a difficult road in 2019, but if it pays off like it could, everyone inside that locker room will tell you it was worth it.

Speaking of the Eskimos, goodness did they look impressive Thursday as they dismantled the BC Lions 33-6. Not to be outdone, the Winnipeg Blue Bombers put together another dominant display as they pounded Toronto 48-21 a day later. It’s still early, but Edmonton and Winnipeg have clearly been the class of the West and there’s a gap to the rest of the pack.

Trevor Harris has always been as accurate as they come, but being reunited with (Esks’ head coach) Jason Maas seems to have taken his game to a whole new level. Harris is still as accurate as ever, but he’s added some extra explosiveness to his game and seems far more like a big threat on any down than he has before.

With Harris, an elite group of receivers, and CJ Gable at running back, Edmonton is as multi-faceted as they come offensively. This team is no slouch on the defensive side of things either, as was witnessed Thursday in Vancouver. The Eskimos sacked Lions quarterback Mike Reilly five times and held him to 157 yards and no touchdowns in a dominant display.

While they may not unbeaten at 3-1, Edmonton hasn’t had a poor showing through their first four games. The team’s lone loss came to the Bombers in a contest that could have gone either way. After the extremely disappointing way things ended in 2018, some wondered if the Esks were poised for a major step back this season. I don’t think that is a worry anymore.

As for the Bombers, well, the record speaks for itself. At 4-0, Winnipeg is the only team remaining without a loss and they’ve put together some quality wins in the process. Sure, a win over a struggling Argos team on Friday wasn’t the most telling, but wins over aforementioned Edmonton and on the road in BC are far more impressive. 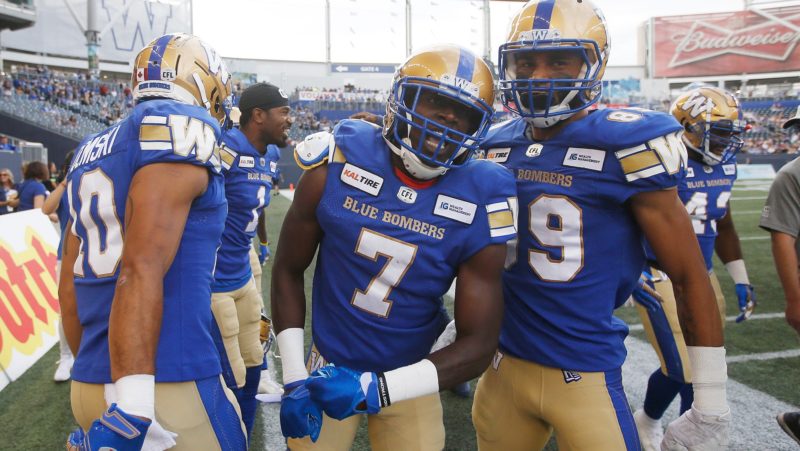 Right now, you simply cannot run on the Bombers; they’re the league’s number one rush defence by a country mile. Right now, opposing teams are averaging less than 50 yards (48.3 to be exact) on the ground per game against Winnipeg, which is as stingy as it comes. The Bombers also lead the CFL with 15 forced turnovers, which is four more than the next highest team.

With Andrew Harris leading the way at tailback, Winnipeg isn’t going anywhere on the offensive side of things, either. Matt Nichols has been steady at quarterback while an extremely deep group of receivers has more than gotten the job done in the passing game. The Bombers are full marks for their 4-0 record.

As good as Winnipeg and Edmonton have been, the gap is helped out by some struggles from their West Division competitors.

The Lions sit 1-4 and their one win came on a last second rouge against Toronto. Calgary has shown some really nice flashes, but have also looked more vulnerable than we’ve seen in quite some time. Finally, the Riders look to still be adjusting to life without Chris Jones, specifically defensively where they’re no longer right at the top, at least for now.

There’s still a lot of time for the Stamps, Riders, and Lions to figure things out. Right now, though, Edmonton and Winnipeg have their acts together in an impressive way. We’re seeing a divide form in the West and it presents a glorious chance for the Eskimos and/or Blue Bombers to really take advantage.