Stamps looking to clean up mistakes against Argos

Stamps looking to clean up mistakes against Argos

CALGARY — Following the Calgary Stampeders’ 30-23 loss to the Hamilton Tiger Cats in Week 5, quarterback Nick Arbuckle said that the team didn’t execute. Heading into a Thursday night match up against a winless Toronto Argonauts squad, they’ll be looking to clean up their play from the previous game.

“(We) just have to make sure we’re locked in on the game plan. Whenever it’s a short week like this, it’s going to be a lot of mental stuff and making sure that we’re good with the communication between me and the receivers and the O-line,” Arbuckle told Stampeders.com. ” … There’s going to be plays that we’re trying to make out there where we might have only repped it one time in practice. So we’ve got to be good on everything and correct our mistakes in the film room.”

Arbuckle has taken over behind centre for the Stampeders after starter Bo Levi Mitchell was placed on the six-game injured list on July 5. In his first appearance of the season, the 25-year-old went nine-for-nine through the air for 93 yards while tossing the game-winning touchdown to Eric Rogers in a comeback effort against the BC Lions. 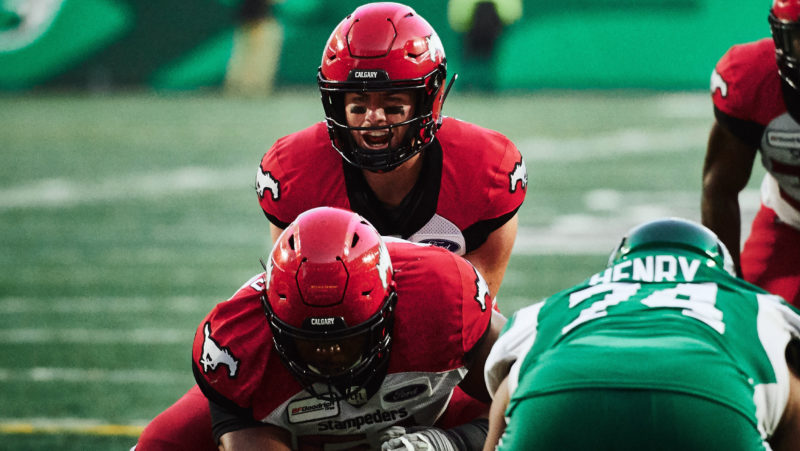 Nick Arbuckle snaps the ball against the Saskatchewan Roughriders in Week 4 (Arthur Ward/CFL.ca)

In his second start of the campaign, Arbuckle completed 24 of 40 passes for 368 yards against the Tabbies.

“The more I play, the more the game slows down and I can see things better, pre-snap and post-snap,” Arbuckle said. “It’s just fun to be out there and obviously, it’s a lot more fun when we win. We’ll make sure we go out there and do better this week.”

Calgary had several drops in the receiving game and also fumbled three times. For head coach Dave Dickenson, those mistakes were what made the difference.

“We didn’t have a lot of rhythm offensively so I don’t really care if it’s through the air or on the ground, we just have to do those little things and not cough it up,” he said. “If we would’ve held onto the ball, I think we could’ve created some momentum and ultimately could’ve won the game.”

The Stamps’ head coach added that receivers Juwan Brescacin and Hergy Mayala have both come off the one- and six-game injured lists, respectively, and they’ll practice ahead of Thursday’s contest.

Calgary failed to score a touchdown through the air in Week 5, but they got some solid contributions from its receiving corps. Rogers finished with 70 yards on five catches, but the biggest performance of the night came from Reggie Begelton, who reeled in eight balls for 119 yards – a game-high and his best total of the campaign to date. The third-year man had 45 yards after the catch and also found pay dirt on a six-yard rush, but he did have one fumble as well.

“We had a lot of good things going on but also a lot of bad things. It’s one of those things that we need to look back and see for the future that once we figure out those bad things, we’ll mesh,” Begelton said.

A return home should give the Stampeders a pick-me-up following a two-game road trip. The Argonauts will be heading into McMahon Stadium looking to avoid opening the season 0-5.

“They’re playing hard, and that doesn’t always translate into wins, but I do believe they feel like they’re improving. You can see it one them. The effort and the edge is there, they just haven’t been able to break through,” Dickenson said. “They’re on a bit of a short week too – they’re on six days, we’re on five – so ultimately with that travel and energy, both teams are going to be looking to who can stay conditioned, who can stay hydrated, and who can maintain it for 60 minutes.”