There is no map, just yet, for her journey.

For now, Christina Pitawanakwat is taking it one step at a time.

As a Grade 10 student, with First Nations heritage, Pitawanakwat has mastered a great deal overcoming the challenges, at one time massive, that may have stood in the way of her road to success.

There were times of frustration, likely brought on by a lack of interest at elementary school, ongoing disappointments and distress that dogged her ability to get to class on time.

Things changed for the better when she enrolled at Toronto’s Danforth Collegiate and Technical Institute in an Individual Educational Program, one that takes into account a student’s strengths and weaknesses, which is designed to help meet their learning needs.

Playing flag football for her secondary school may have also been the catalyst that has had a huge positive effect on her overall physical, social and mental development.

Choosing to play the sport started with some coaxing from friends plus lots of encouragement from educators, spearheaded by Wesley Tsang, the coach of the team.

For Pitawanakwat, whose name means “Among the Clouds” in her native language, it was a huge step and it coincided with the school’s debut in the Toronto District School Board (TDSB) league.

Pitawanakwatis from the Indigenous Odawa Tribe, related to the Algonguin people. She commutes with her family to visit friends in Manitoulin Island, along the Bruce Peninsula, which is the original homeland of the Odawa.

Unaware of how the game was played, with its many rules, Pitawanakwat decided to try out for the Danforth school team. Her coach, who is a visual arts teacher and never had her in his class, didn’t know much about Pitawanakwat.

To his credit, he was quick to reassure the 15-year old, that he was available to help her learn and, even more important to him, use the opportunity to have fun.

It didn’t take long for Pitawanakwat, intuitive and energetic, to develop into one of the better players on a team that won five of seven games. A stellar defensive player, she just might have been the X-factor that helped the team qualify, in its honeymoon year and miracle season, for the Tier Two league championship – which it lost, 7-0. 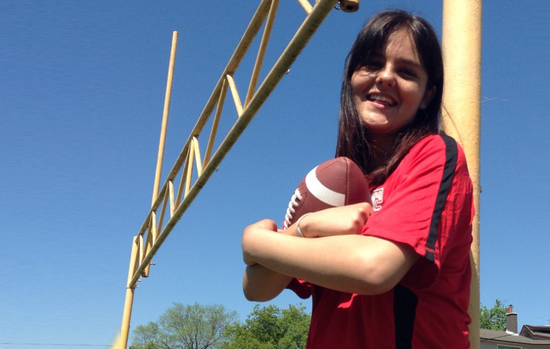 “I was nervous at first, but (I) really like playing – and especially the rough and tough side of the game,” said Pitawanakwat, who first tried playing on the offensive line, then experimented with catching passes, but caught a real liking to the job of a linebacker. “It’s a great way to exercise, get over stress and the pressures of the day.”

Within a short span of time, Tsang was impressed with the ability and determination of Pitawanakwat, along with her positive and formidable presence on the team.

“She was quiet at first, but very friendly,” he said. “I did notice that she had a competitive flair and I could tell that she was happy and mixing well with the rest of the team.”

Like many young people, Pitawanakwat, the youngest of triplets and being raised by her single parent mother, has had her share of struggles. At times, the difficulties were emotionally challenging. In some cases, she was left frustrated, lost and downright languorous.

“I was told at an early age, before I came to Danforth, that I had no ability, couldn’t learn – and all that did, was help me downgrade myself,” she said, admitting to times when she felt bullied by others, didn’t like school and was anxious to move on.

Football has given Pitawanakwat a huge lift and, according to her mother, she’s now the first out the door and off to school.

“For me, I know that things have changed for the better while at Danforth,” she said. “I have more confidence, feel better with myself and get along with others on the team. Football has helped me, maybe I can now help others.”

After she graduates from secondary school, Pitawanakwat is interested in a career that involves helping people. She has a keen interest in law enforcement and the science behind criminal behavior.

“I want to work with Indigenous teens, some who have lost hope,” she said. “I know what motivation can do and how there are people willing to offer assistance. I want to be someone like that, telling them not to give up, stay focused and push ahead.”

Knowing the benefits that participation in sports can bring to a student, Jim Spyropoulos is a strong supporter of getting them involved in all aspects of physical education.

Now a TDSB Executive Superintendent responsible for Indigenous Education, Spyropoulos played football in university and, back in 1990, made three interceptions in one game. As for Pitwanakwat, he was elated hearing of her success on the gridiron.

“This woman is an excellent example of the brilliance that exists among our Indigenous students,” he said. “She is a terrific role model and my hope is that her success inspires others to follow in her footsteps.”