Sanchez on Tre Roberson: ‘Every day is Tre day’ 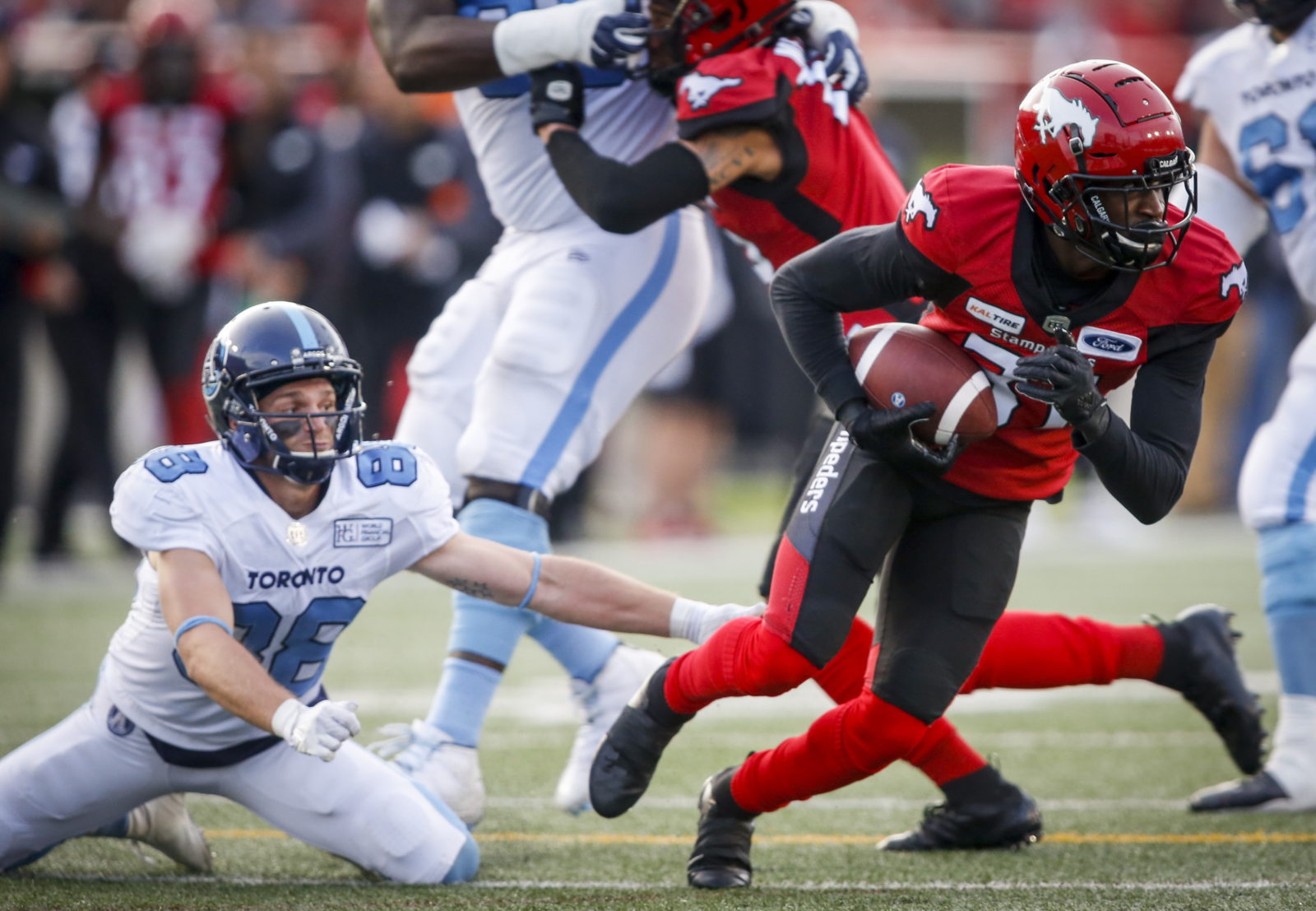 Sanchez on Tre Roberson: ‘Every day is Tre day’

Toronto Argonauts' Jimmy Ralph, left, looks on as Calgary Stampeders' Tre Roberson, picks up a fumbled ball and runs it in for a touchdown during second half CFL football action in Calgary, Thursday, July 18, 2019. THE CANADIAN PRESS/Jeff McIntosh

TORONTO — Through the first five weeks of the CFL season, there hasn’t been a player on more of a roll than Calgary Stampeders defensive back Tre Roberson.

The 26-year-old was the Stamps’ nominee for the league’s Most Outstanding Rookie last year, and if he continues the stellar run of play he’s had to open the 2019 campaign, he’ll be in the running for some more hardware.

Roberson has put the left side of the field on lockdown. He’s hauled in five interceptions in four contests, which is more picks than the Ottawa REDBLACKS, Saskatchewan Roughriders, BC Lions, Toronto Argonauts, and Edmonton Eskimos’ defences can boast.

In the latest edition of The Waggle presented by Sport Clips, Davis Sanchez told Donnovan Bennett discussed whether Roberson was the best defensive back in the CFL.

EPISODE OVERVIEW: The guys break down the decision making during the dramatic ending to Saturday’s game between the Lions and the Argonauts. Plus, how do the Ticats fill a Sean Thomas Erlington sized hole and why are the Bombers being so secretive? This and more on this week’s episode of the Waggle presented by Sport Clips.

“I spoke with Josh Bell, the defensive backs coach for the Stamps, during training camp. I asked him about their secondary – because there were a lot of new pieces – and if he was concerned or was there anyone for me to look at. He said No. 31. I said ‘I know who Tre Roberson is,’ he goes ‘No, watch the difference you’ll see from last year to this year. He’s made a huge jump,'” Sanchez continued.

“You’ll find that a lot with guys going from their first and second year, freshman to sophomore because it’s the first time that you know what it’s like to be a pro. After that, you already have that experience and you’re not going to have that big of a growth. But first to second year, I know for me it was huge. For Tre, it’s been gigantic.”

The second-year man is playing with a new swagger and knows that quarterbacks are wary of throwing his way.

“I loved listening to him on the live mic with Duron Carter. There was a point where Wynton McManis was telling him to stop talking to Duron. ‘Just stop talking to him, stop talking to him,’ and Tre just looked over and said ‘I don’t care what he says or what any of these guys say, they can’t do nothing over here and they know it,’ and it’s been true,” Sanchez said.

Roberson has been the shining star for the Calgary defence thus far, but football is far from a one-man show.

There were questions heading into the season regarding how the Stampeders would fare on the defensive side of the ball. Defensive coordinator DeVone Claybrooks departed to become the head coach in BC, linebacker Alex Singleton left for a chance in the NFL with the Philadelphia Eagles, and pass-rusher Micah Johnson signed with the rival Saskatchewan Roughriders.

However, new DC Brett Monson has his unit performing well above expectations to open the campaign. They currently sit second in the league in yards allowed per game with 963. Only Edmonton has been stingier in that regard. They’re fourth in the league with 11 sacks and lead the league with eight interceptions, including a pair of pick-sixes.

“Calgary was giving up 31 points. They held Saskatchewan, who’s having a nice start to the year offensively, to 10 points. Five sacks in the game, three interceptions plus the pick-six,” Bennett said. “Winnipeg, as we mentioned, is the best defence in the league. Hamilton is right there with them in that conversation. But with all the new guys that they have on that roster – and defence is something that you need familiarity – I think by the end of the year when we’re talking about who the best defence in the league is, I wouldn’t be surprised if we say it’s Calgary.”

If opposing teams don’t come out firing against this Stampeders team, they’re going to find themselves having a tough time putting up points. As the saying goes, defence wins championships, and with Roberson playing at the level he is, Calgary will have a good chance to defend its Grey Cup title.