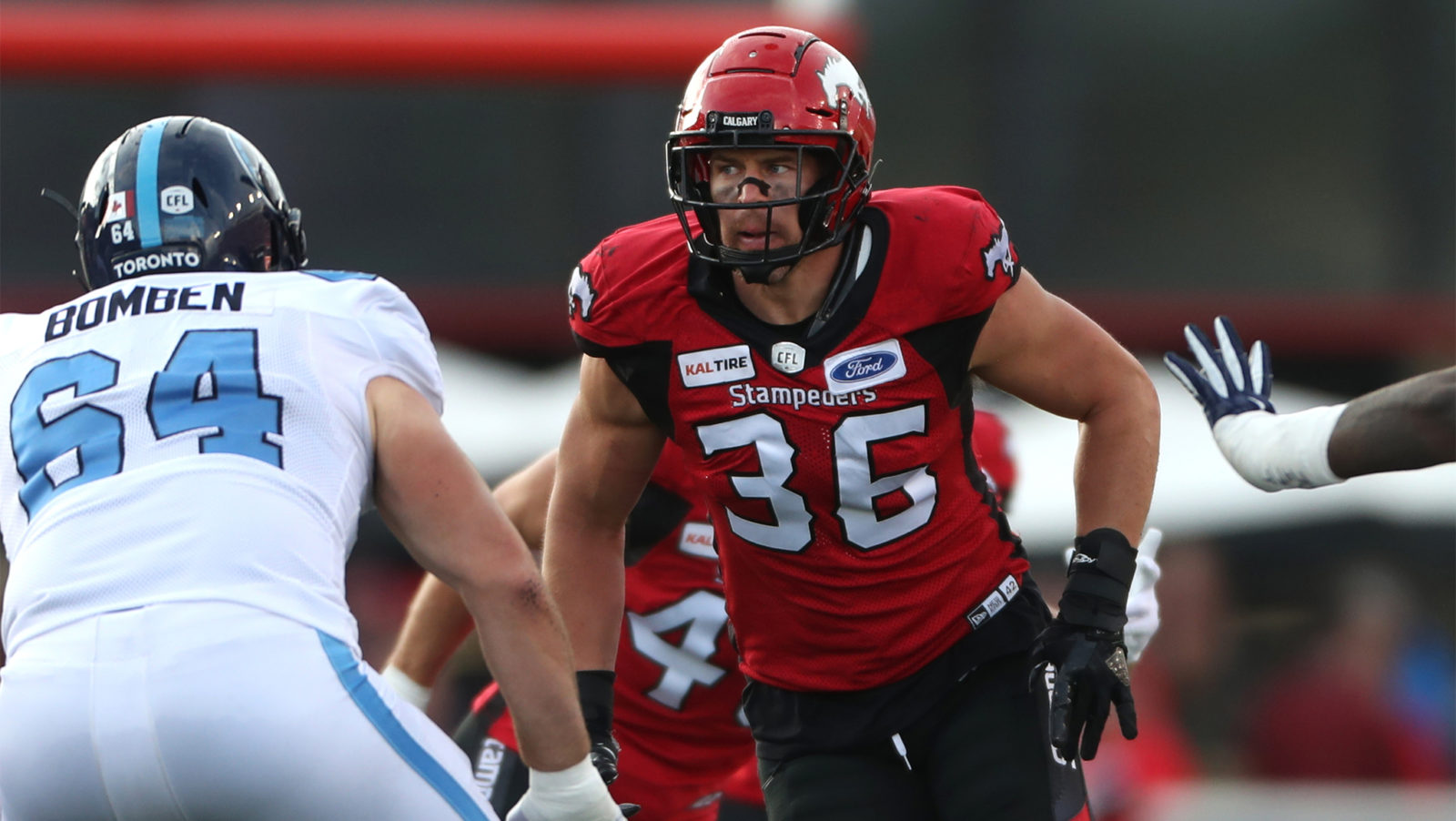 Hello, Montreal Alouettes. I’m impressed by your trickery. A reverse coupled with a throwback to the QB? Magnifique. To me, football is like a great cut of beef. It doesn’t need anything more than a spritz of salt and pepper on it and I can be completely satisfied. However; change things up with a little melted Gorgonzola on it once in awhile? Yes, please.

So you thought Solomon Elimimian’s debut with the Roughriders was a little underwhelming?

I dunno, he did have five tackles against Calgary in Week 4. But maybe it wasn’t vintage Sol, sure.

After that first excursion of the season and a bye week of prep to get him feeling really comfy-cozy in the middle of the Saskatchewan defence, Elimimian looked like the guy we’ve grown accustomed to, all hellbent for leather (I like that phrase even though I admit I haven’t the faintest idea what it really means) and insistent that he have a say in almost every play.

Seven tackles, he had against the Lions (two of them for losses) and a quarterback sack too.

Elimimian may have had a little extra something to prove in that game, taking on his old team a few months after being released.

But I suspect it’s something more than that. I suspect that Solomon Elimimian has lots left in that gas tank of his. Missing most of last season with a wrist injury might even be a good thing, in the long run.

A sabbatical from bodily crushing might have been refreshing for a 32-year-old demolition artist with 757 career tackles.

Late in the movie, young hot shot pitcher Nuke LaLoosh gets into a beef with catcher Crash Davis. When Davis pushes him too far, LaLoosh wheels and flattens him with one punch.

“When you get into a fight with a drunk, you don’t hit him with your pitching hand,” says Davis, pleased that his young student bounced him with a left, not a right.

The scenario may be different, but the spirit of the lesson remains.

Late in the game, with Montreal leading Edmonton, Adams showed his gritty leadership qualities when he rounded the corner as a blocker on a running play, leaning his right shoulder hard into an Eskies’ defender.

Good block, but maybe Adams could shy away from using his throwing shoulder as a battering ram. Leadership illustration? A-plus. Execution?

Now that Adams has felt the tumblers click as a CFL quarterback, he should not feel the need to be doing that kind of thing again. Point proven.

BONUS TAKEAWAY: That first quarter reverse and throwback? I guess Adams wanted to “announce my presence with authority.”

3. THERE’S LIFE IN THOSE CREAKY KNEES YET

Cory Greenwood has battled injuries for so much of his career, including missing the entire 2017 season when he suffered a knee injury on the first day of Edmonton’s training camp.

It wouldn’t be a real stretch to say that when Alex Singleton left the Calgary Stampeders via free agency, lots of people wondered if Greenwood was up to the task of filling the middle linebacker’s role, due to those injuries and the advancement of time.

On Thursday night against Toronto, the 34-year-old shoved it right back in the faces of the doubters, with five tackles, a forced fumble on one play, a recovery on another, and an interception.

With 34 tackles on the season – he’s second in the league in that category, just two back of Montreal’s Patrick Levels – Greenwood has done the job in Calgary, and he plunked down a big ol’ exclamation mark of a game in Week 6 to drive the point home.

If it was at all lost during a 2018 season that was dominated by defence in Saskatchewan, receiver Shaq Evans pulled down 50 balls in his rookie campaign, for 785 yards.

The sophomore receiver is a guy you want involved in your offence. Two weeks ago, versus Calgary, Evans was targeted just once, and the Roughriders’ offence was held to a paltry 161 yards passing. Earlier in the season, Evans was thrown at eight times against Ottawa, with Saskatchewan passing coming in at 360 yards. Evans had 103 of those yards. Against Toronto, he had seven attempts go his way, and Sasky piled up 430 yards passing. Evans had 112 yards himself.

In Week 6, Evans hauled in five of eight passes thrown in his direction, for 158 yards, as the Riders got the aerial numbers up against BC, tallying 278.

5. THE WILLIE JEFFERSON SHOW IS ABOUT TO DO BOFFO BOX OFFICE

Willie Jefferson was one of the top free agent signings during the off-season, expected to add unstoppable, dominating pass rushing to an already fearsome defence in Winnipeg.

He does not have the stats-line numbers to put him with the leaders.

Yet. (Sidebar: Charleston Hughes has 22 tackles and 8 sacks, people!)

With 4 tackles and 2 sacks, Jefferson is down the list of defenders through Week 6.

But it was apparent, very apparent, in the Bombers’ win over Ottawa, that his signature explosive first step was back, baby, and that he is rounding into the form that made him such a compelling, monstrous force of line-of-scrimmage gravity when he was in Saskatchewan.