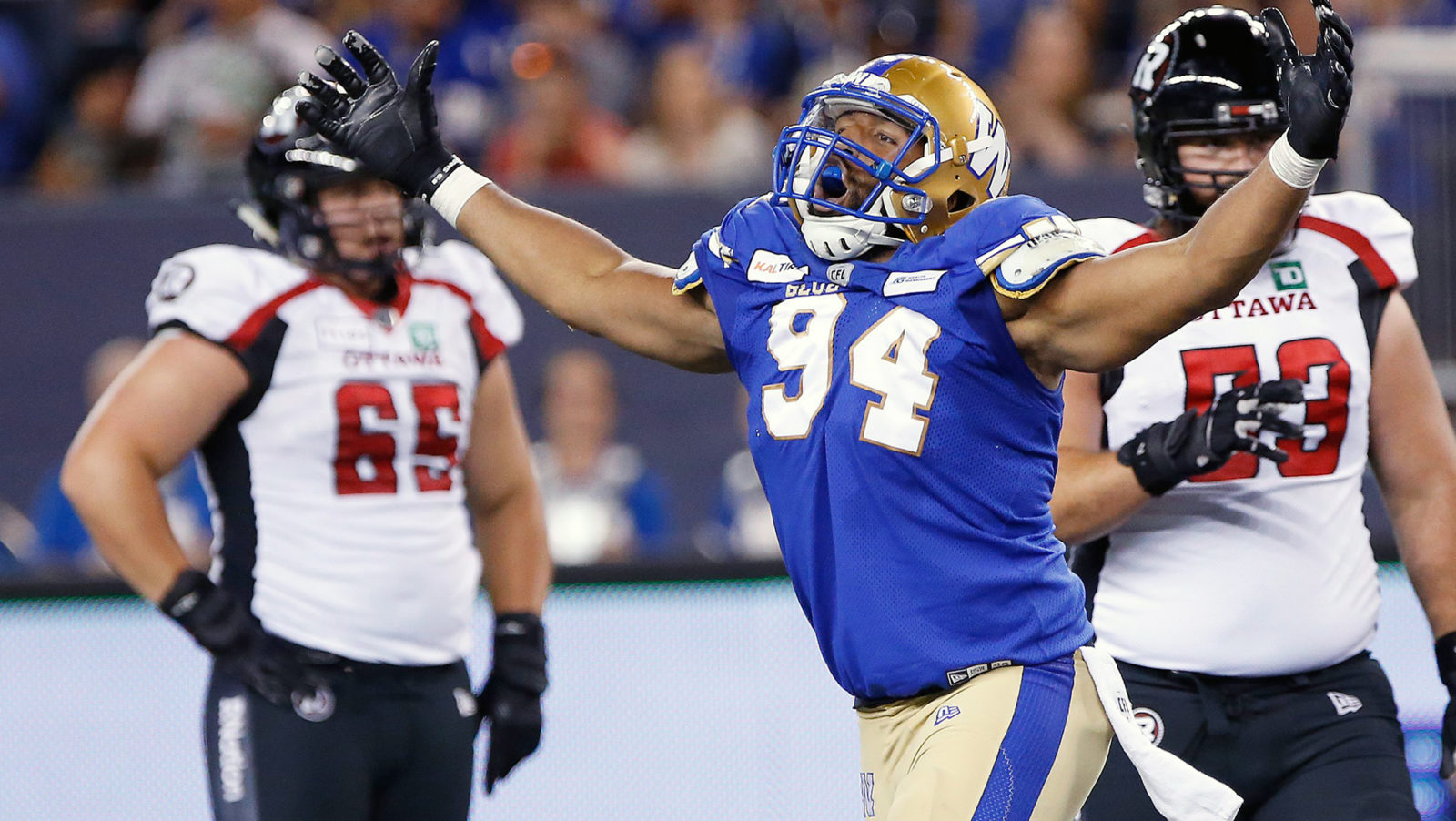 The Winnipeg Blue Bombers are the class of 2019 as we approach the one-third mark of the season. Now, many might read this and say, “thanks genius” to that proclamation; after all, the Bombers are 5-0 and the only undefeated team remaining. But handing out “best in class” to Winnipeg goes well beyond a perfect record.

As exciting as the Blue Bombers can be with the ball, right now I’m most impressed with what they’ve done defensively. Winnipeg has forced 12 turnovers this season (8 interceptions, four fumbles), which is three times more than the four touchdowns they’ve had scored against them. That’s a pretty impressive number.

But what really defines this group is what they do in the trenches, because nobody is doing it better than the Bombers. With nine sacks in five games, they might not have the sexiest totals, but that’s just fine with what Winnipeg has done to opposing run games.

You simply cannot run the ball effectively against the Bombers. They have yet to allow a rushing touchdown this season and are averaging less than 60 yards against per game. Oh, and don’t forget most of this has happened without Adam Bighill at MIKE linebacker, which makes his imminent return even scarier.

The trio of Steven Richardson, Jake Thomas, and Drake Nevis has been nothing but disruptive in the middle of Winnipeg’s defensive line. Those three tackles have made it so difficult to run inside, while Kyrie Wilson and Anthony Gaitor have really clamped down without Bighill.

RELATED
» Rewind: All the best highlights from Week 6
» Nichols sets franchise record in win over Ottawa
» Defence dominant as Bombers keep rolling
» The Waggle: 1-on-1 with Andrew Harris

The Bombers aren’t getting torched through the air, either; they’re allowing less than one passing touchdown each week. Sure, Winnipeg’s average yards per game defending the pass (278.6) is higher than it is on the ground, but that’s to be expected knowing they’ve almost eliminated opposing rushing attacks.

On offence, Andrew Harris hasn’t shown any signs of slowing down whatsoever. He sits third overall with 441 rushing yards and his 6.1-yard average is second only to Montreal’s William Stanback. I’m starting to believe age doesn’t apply to Harris’s performance; he had his best ever season last year at 31 and looks just as good a season later.

This Bombers group of receivers might be as deep as it gets in the CFL. You have to scroll down a bit to get to Winnipeg’s first player in league receiving yards, but that’s okay. Any one of Harris, Darvin Adams, Lucky Whitehead, Nic Demski, or Drew Wolitarsky can go off for a huge game. And any time one of those guys is shut down by an opposing defence, another one is ready to bust out. It isn’t ideal for Fantasy, but I’m not sure how much the Blue Bombers are worried about that.

And right there blending it all together is the often overlooked Matt Nichols. The veteran quarterback is never going to lead the league in yards or attempts, but that’s not what Winnipeg is asking of him. Nichols needs to be solid, proficient in the red zone, and limit his mistakes. He gets a check in every one of those boxes.

Nichols has completed more than 73 per cent of his passes this season, which is tops among starting pivots. He’s thrown 12 touchdown passes against just one interception, which covers everything else.

Because Harris is such a focal point of Winnipeg’s attack, Nichols sits sixth in the league with just 127 passing attempts. Instead of needing to be THE guy, the Bombers are asking him to be the captain of a very balanced and multi-faceted offence. He’s thriving in that environment.

Mike O’Shea and Kyle Walters have done a great job in Winnipeg. The head coach and general manager, respectively, have been patient in building this team back to powerhouse levels. Since returning to the playoffs after a four-year absence in 2016, the Blue Bombers have taken significant strides every single season. Now in year four of this progression, Winnipeg is knocking on the door to win their first Grey Cup in almost 30 years.

New kids on the block

It has been a strange season thus far when it comes to quarterbacks. Mike Reilly has struggled in step with the BC Lions while Bo Levi Mitchell has missed Calgary’s last three games with an injury. We also saw injuries sideline Zach Collaros in Saskatchewan and Montreal’s Antonio Pipkin in Week 1.

It has all helped a trio of young, fresh-faced pivots emerge in one of the biggest stories of 2019. Cody Fajardo, Vernon Adams Jr., and Nick Arbuckle are making CFL fans take notice and all three are a big reason their teams sit above .500 right now.

Fajardo was forced into action early for the Riders in the team’s season-opening loss to Hamilton and looked shaky. That rectified itself in short order, though; since taking over in Week 2, Fajardo is 2-2 as a starter and has looked very proficient more often than not. As of now, Fajardo is the guy in Saskatchewan and he’s not showing signs of handing over the reins.

I liked the way Fajardo bounced back in Saskatchewan’s 38-25 win over BC on Saturday night. Fajardo really struggled in his lone poor start of the season two weeks ago at home to Calgary and some wondered whether the bloom was starting to come off the rose. Give credit to Fajardo, though, because he made some big plays, especially in the second half, to help the Roughriders to their third win of the season. 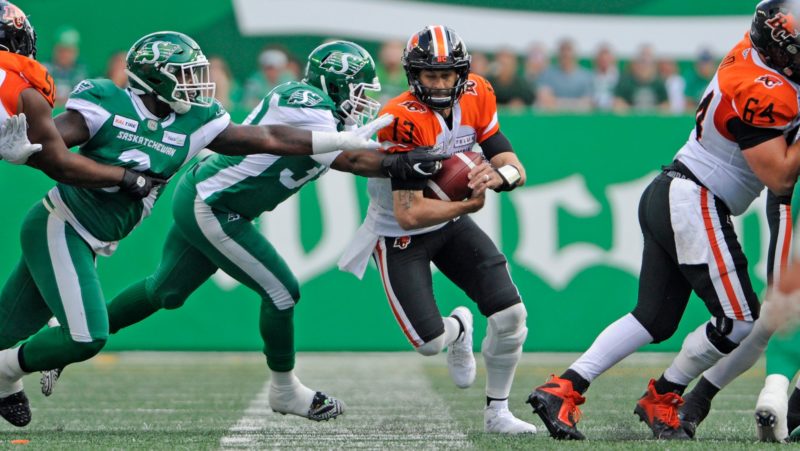 One of Fajardo’s biggest strengths this season has been the opposite in the past: accuracy. Now up over 71 per cent on the season, Fajardo has worked hard on his decision-making and it’s paying off in a big way. Taking that rough go against the Stamps out of the picture, Fajardo has thrown six touchdowns against just two interceptions; he’s also scored a rushing touchdown in every game this season.

All Adams has done is win games. You can make it three straight W’s for Montreal after Saturday’s 20-10 decision over Edmonton, bumping Adams’s record as a starter up to 3-1 this season. It’s a nice success story that has seen a lot of hard work put in along the way.

We talked plenty about Adams last week, so here’s a quick summary. He’s throwing the ball with purpose, he’s vastly improved his accuracy, he’s much better in the pocket, and he still possesses game-breaking speed. That combination has allowed fans in Montreal to be truly excited about a quarterback for the first time in years.

But what I like most about the Adams story is how he’s stuck with it. Adams could have been easily frustrated or discouraged with how things started with the Alouettes back in 2016. For a guy who had known nothing but success at every other level, professional football in Canada took some getting used to. Adams approached it the right way, though; he learned the game, bided his time, and made sure he was ready the next time an opportunity came up.

And then there’s Arbuckle, who had the most difficult shoes to fill. When reigning MOP Mitchell went down in Calgary’s Week 2 comeback win over BC, Arbuckle stood in with an incredible fourth quarter performance. But that’s just one little stretch with the adrenaline pumping, right? Well, Arbuckle is showing he can get the job done in the long run, too.

Now 2-1 as a starter, Arbuckle has allowed the Stampeders to stay relevant despite losing their most important player. No one is suggesting a quarterback controversy in Calgary because this is still Mitchell’s team. But Arbuckle is succeeding against solid opposition and getting invaluable experience earlier than many, including he himself, would have thought.

Arbuckle’s future prospects are far more up in the air than either Fajardo or Adams. The other two in this emerging trio are well on their way to winning a starting job permanently. Arbuckle, on the other hand, knows he’ll return to the backup role as soon as Mitchell returns to the roster. All Arbuckle can do is continue excelling while he’s playing and return to the backup role with the right attitude upon Mitchell’s return.

After that, it’s all about seeing where the cards fall. With the way Arbuckle has played, though, he’s ensured himself a much better hand when that happens.