Accuracy Grades: Who was on target in Week 6? 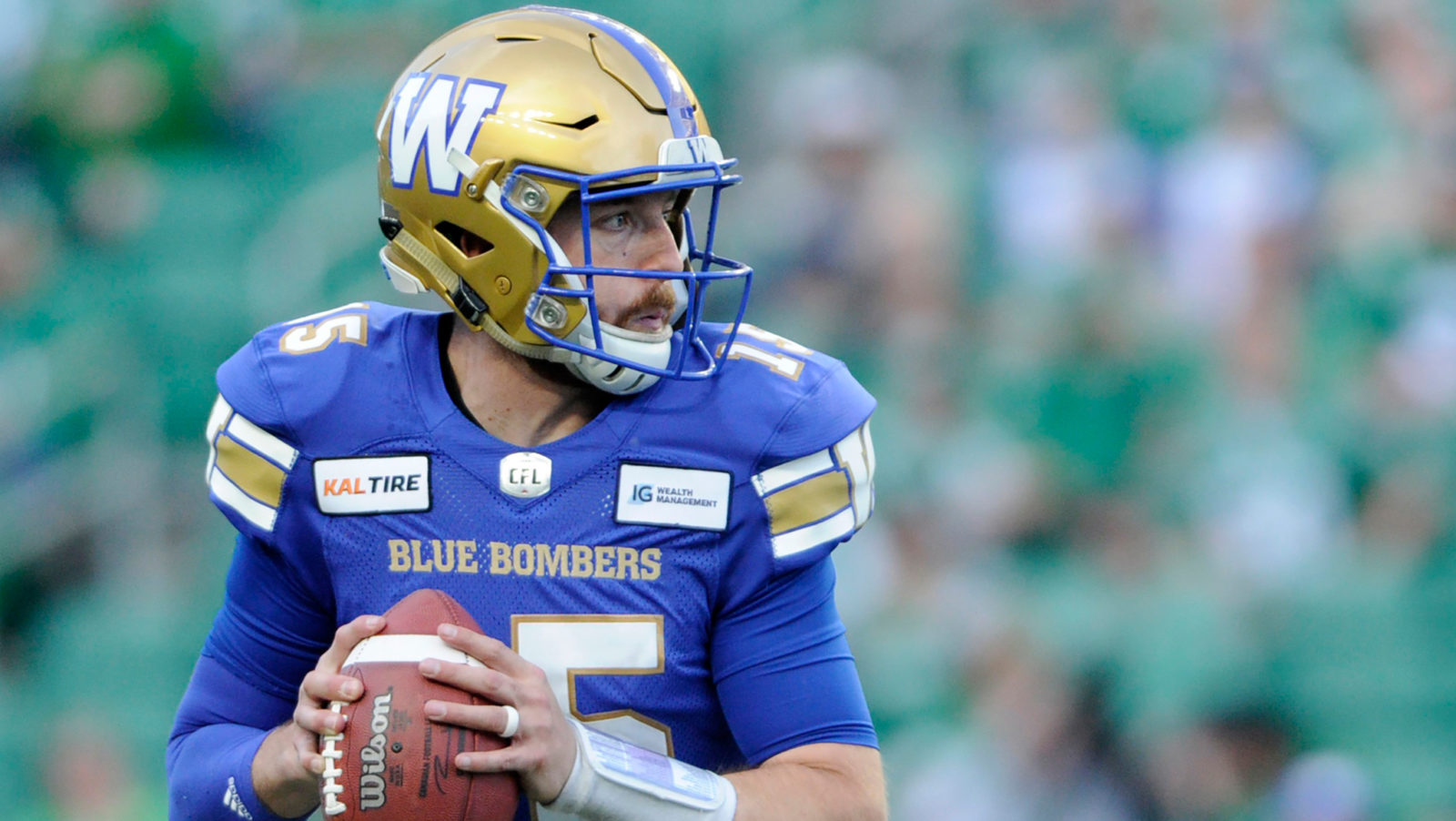 Accuracy Grades: Who was on target in Week 6?

Another week, another round of impressive performances by CFL quarterbacks as we continue on the 2019 journey towards awarding the CFL’s most accurate passer.

Let’s break down Week 6 in the CFL: 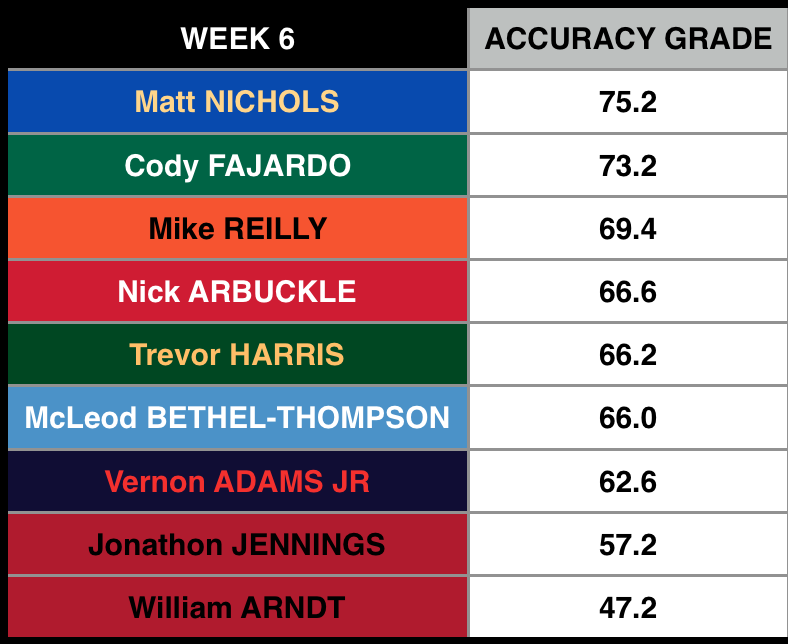 Week 6 in the CFL saw a total of ten quarterbacks attempt a pass while Winnipeg led the league with FOUR different players testing their arm.

While Andrew Harris and Darvin Adams do not qualify for the year-long quarterback accuracy competition, and Chris Streveler’s one called pass play on ten snaps Friday night against Winnipeg didn’t register, it was the Bombers main man who – unsurprisingly – dominated the weekly standings and helped himself climb the rankings yet again.

Having both Jonathon Jennings and William Arndt pulling up the back of the Week 6 field really tells you everything you need to know about the REDBLACKS 31-1 road defeat, their third-straight loss.

It appears the REDBLACKS passers aren’t quite as 1A and 1B as previously thought, but Dominique Davis will sit out Thursday against Calgary leaving Jennings and/or Arndt to find the bullseye more often at home than they did on the road in Week 6.

Despite getting a huge Alouettes win – his third-straight by the way – Vernon Adams Jr. continues to sit at the back of the back. Again, accuracy is important and it’s interesting, but it isn’t everything and Adams Jr. has been a great example of that by finding ways to win without being as pinpoint as other passers.

Trevor Harris posted his second lowest accuracy grade in an Esks uniform when he posted a 66.2 in Week 6. Hs only lower grade (61.4) came in Edmonton’s only other loss, in a Week 3 defeat at Winnipeg.

Nick Arbuckle of the Calgary Stampeders continues to plug along for Dave Dickenson’s crew while slowly coming back down to Earth from his ridiculous start to 2019 in relief of Bo Levi Mitchell, who I have a funny feeling is going to return from his pectoral injury with a bionic arm and shred the 2019 accuracy leaderboard to pieces.

Now for a look at our Week 6 quarterback accuracy podium. 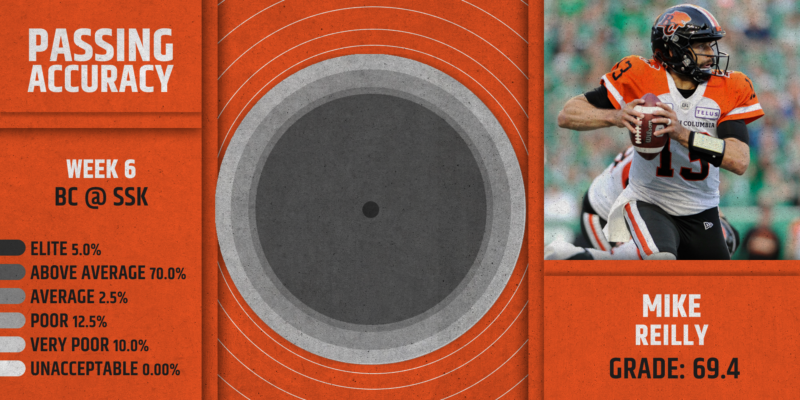 For Reilly, it was yet another supreme effort that saw victory slip away slowly in the second half. Reilly has placed top three in quarterback accuracy in four of his six games back in Lions orange but has surprisingly never topped the charts as the Lions cling to a Chris Rainey heel as their only victory of 2019 to date.

What amazes me about Reilly’s outings for the Lions thus far is the volatility he plays with. Mike isn’t afraid to attempt forcing the ball into tight windows and plays with a reckless abandon that often dazzles and occasionally gets him in trouble. Regardless of that up and down approach his grade is consistently high enough to reach one of the three top performances of the week. 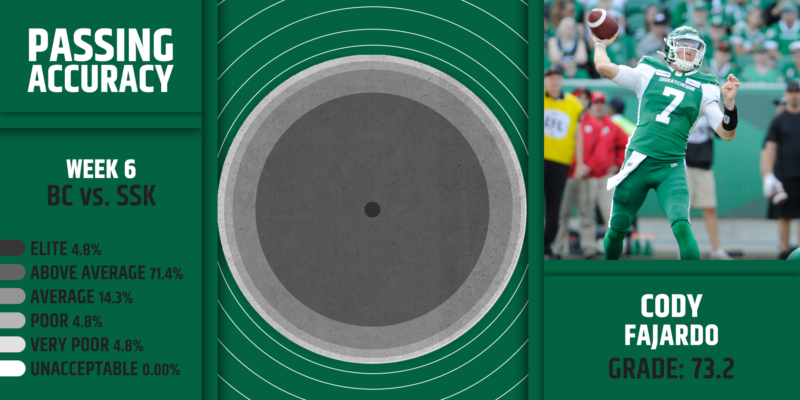 You start to get the sense that people in Regina are really coming around on the idea of Fajardo as a viable option to move forward with despite Zach Collaros making his way back from the unfortunate Week 1 injury in Hamilton.

In Fajardo, the Riders have the blessing and curse of a mobile passer willing to take a hit to make a play at or beyond the line of scrimmage, which makes them vulnerable to being very thin at the most important position with one hit as Isaac Harker continues to develop. There is no denying Fajardo – outside of a couple hiccups – has played beyond expectations. 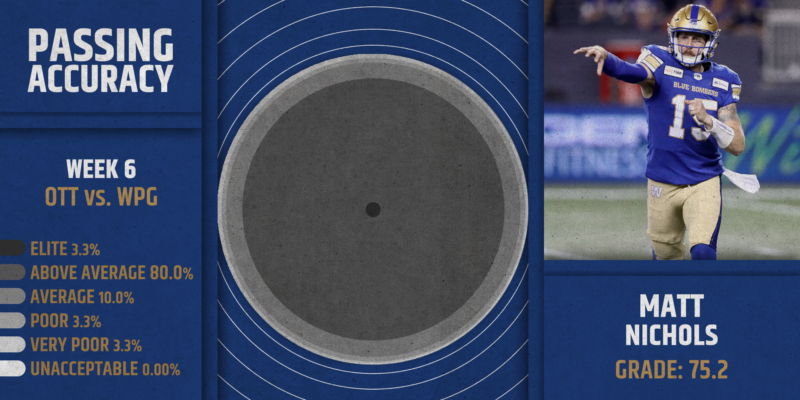 Nichols could do no wrong Friday night against Ottawa in a 31-1 victory. He set a record for completions in a row and had complete control of the Bombers huddle playing with a smile while wearing the CFL on TSN’s live mic game.

Yet again this season, Offensive Coordinator Paul LaPolice has done a masterful job of calling the right game for Nichols but he continues to make 3-5 great throws per game while limiting errors at every turn which is why he deserves plenty of credit for keeping the Bombers focus through their best start (5-0) since 1961. 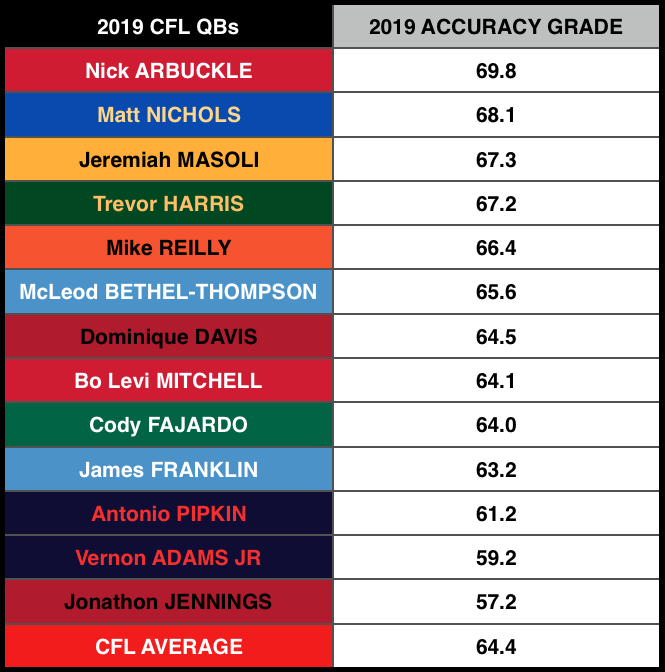 With the highest single-game accuracy grade of 2019 so far (75.2), Matt Nichols jumped both Trevor Harris and inactive Jeremiah Masoli in the season-long standings all the way up to second overall. Just three weeks ago, Nichols was resting down in eighth place in quarterback accuracy but his recent surge has been impressive to watch as the Bombers continue to roll.

Despite Mike Reilly (+0.6) and Matt Nichols‘ (+1.8) season average rising, the league average dropped by 0.3 due in large part to the REDBLACKS passers adventure in Winnipeg.

A Thursday double header and marquee matchup Friday night with the live mics on should create even more intrigue in the way we judge these elite passers heading into the CFL regular season’s third month.