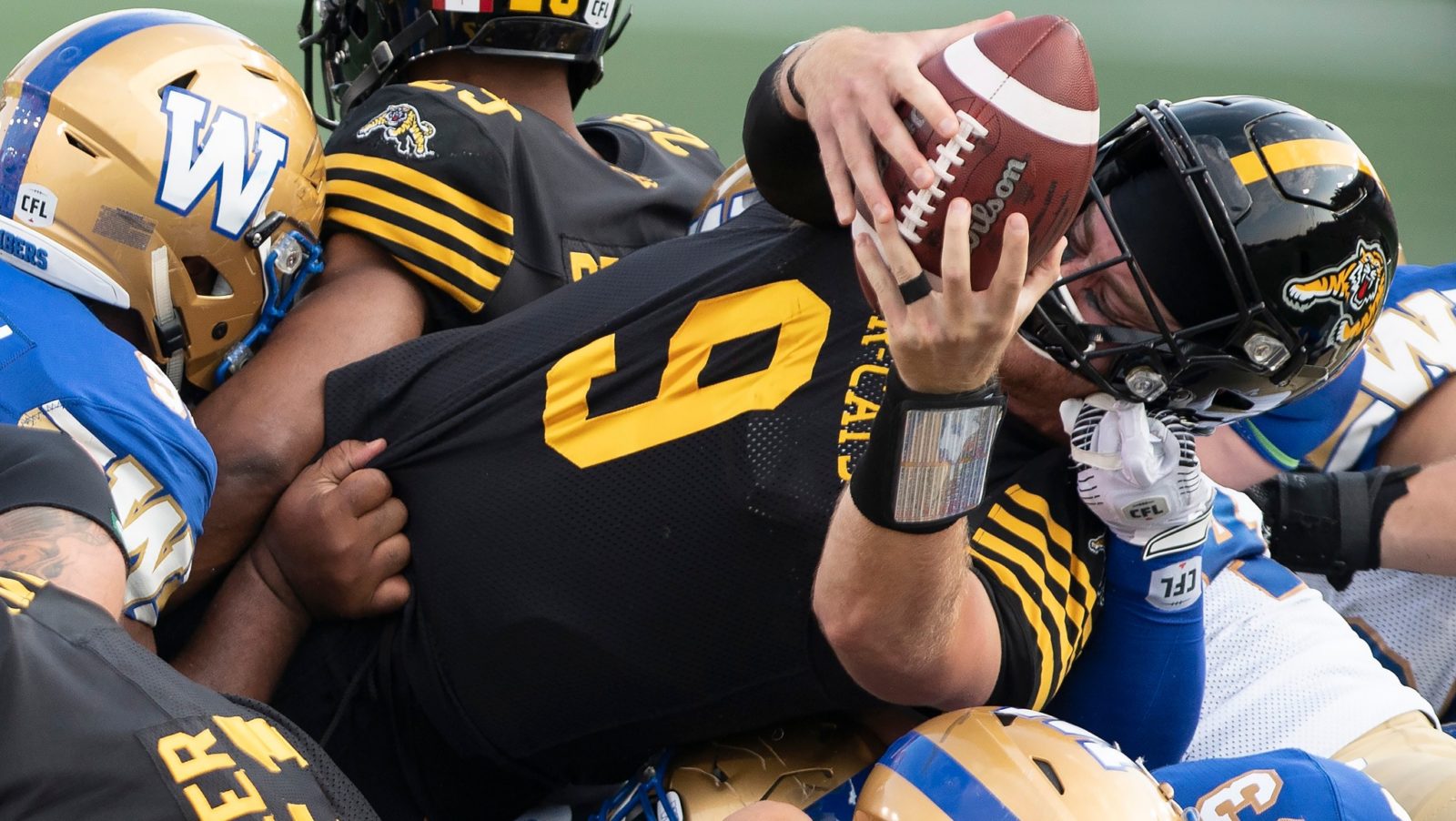 HAMILTON — The Hamilton Tiger-Cats overcame the loss of starting quarterback Jeremiah Masoli to edge the Winnipeg Blue Bombers 23-15 at home on Friday night. The team relied on strong defensive play and solid special teams to win its fourth straight at home and improve its record to 5-1.

Momentum was firmly on Hamilton’s side after the offence scored on the opening drive, but the team was dealt a major blow when Masoli left the game late in the first quarter with a lower body injury. Backup quarterback Dane Evans replaced Masoli under centre and completed 13 of 25 passes for 94 yards and an interception in the win.

Masoli completed six of seven passes for 59 yards and also scored a 22-yard rushing touchdown before exiting with the injury.

The Ticats’ defence stood strong all night against Matt Nichols and the Bombers’ high-powered offence, notching three interceptions, two fumble recoveries and a sack while allowing only one touchdown. Nichols finished the game with 261 passing yards and a touchdown on 29 completions.

Ticats kicker Lirim Hajrullahu made all three of his field goal attempts and defensive back Jumal Rolle had a big game for Hamilton with two interceptions and four tackles.

Running back Andrew Harris had another productive game for Winnipeg with 117 total yards on eight rushes and eight catches. Bombers defensive back Winston Rose added a pair of interceptions and now has five interceptions in his last four games.

The Ticats’ offence struck right away on the opening drive, with Masoli getting the ball to receivers Brandon Banks and Luke Tasker for first down gains before calling his own number and breaking free for a 22-yard touchdown run. Masoli outran the Bombers’ defenders and got to the edge on the left side of the field for his longest rush of the season. The ensuing two-point conversion attempt was unsuccessful with Rose intercepting Masoli.

Momentum remained on Hamilton’s side when Rolle intercepted a Nichols pass just two plays into the Bombers’ first offensive drive. Rolle returned the interception 45 yards down the field in front of the roaring home crowd and appeared to score a touchdown until a review ruled him down at the one-yard line.

Evans came in for the short yardage package and finished off the drive one play later with a one-yard rushing touchdown. Masoli completed the two-point convert pass to running back Maleek Irons to put the Ticats up 14-0.

Hamilton was dealt a major blow soon after that when Masoli went down with a non-contact lower body injury while trying to evade the Bombers’ pass rush. Evans replaced Masoli under centre before Masoli was later officially ruled out for the remainder of the game.

Hamilton’s defence kept things rolling to start the second quarter by forcing another turnover, with defensive back Tunde Adeleke picking off Nichols for his first career interception.

The Ticats continued to take shots down the field with Evans at quarterback, but Rose stepped up again for Winnipeg and intercepted an Evans throw while the quarterback was trying to complete a deep pass.

The turnover gave the Bombers’ offence a much-needed boost, and a 27-yard rush from running back Andrew Harris and 25-yard catch from receiver Kenny Lawler put Winnipeg in position to get on the board. Nichols began to find his stride through the air and finished off the long drive with a beautiful 25-yard touchdown pass to receiver Darvin Adams.

Adams did a great job holding on to the football as he came down to the ground, and Justin Medlock kicked the convert to cut Hamilton’s lead down to seven points with eight minutes to go in the first half.

The Bombers then added two points on a safety after a 71-yard punt from Medlock pinned the Ticats’ offence deep in their own end, but Hamilton managed to answer back with a 21-yard field from Hajrullahu to extend the lead once again before half-time.

Hajrullahu added another field goal for the Ticats on a 27-yard kick that made it a 20-9 ball game midway through the third quarter, but Winnipeg responded with a 33-yard field goal from Medlock to make it a one possession game.

Hamilton’s defence picked up the slack with Masoli out and forced another key turnover when Rolle picked off Nichols for his second interception of the night. The Ticats added another field goal off the turnover with Hajrullahu knocking through a 42-yard field goal just after the start of the fourth quarter to put the Ticats up 23-12.

Winnipeg added to their total down the stretch with an 18-yard field goal from Medlock after the three minute warning, but the team’s fourth quarter comeback attempt came up short with under a minute left when Nichols was sacked by defensive end Adrian Tracy to end the drive.

Both teams will be in action again next Thursday, with the Winnipeg Blue Bombers taking on the Toronto Argonauts on the road and the Hamilton Tiger-Cats traveling to face the Saskatchewan Roughriders.