O’Leary: No time to dwell in Nation’s Capital

O’Leary: No time to dwell in Nation’s Capital

From the Ottawa REDBLACKS’ one-yard line, it seemed like the game was in the bag.

Richard Sindani was poised to burst into the end zone before Corey Tindal made the perfect defensive play, punching the ball out of Sindani’s grasp. The Calgary Stampeders receiver made it into the end zone; his passenger did not.

Sherrod Baltimore pounced on the loose ball, confirming the Stamps’ fifth turnover of the game. The ball at Ottawa’s one-yard line and 1:54 left on the clock, it felt like the REDBLACKS’ three-game losing streak was about to come to an end.

RELATED
» Dominique Davis ‘very hopeful’ to return against Als
» Watch: Jennings and Sinopoli connect for first TD of the game
» By the Numbers: View Boxscore

But there’s something about these two teams and weird games, whether it’s an essentially one-legged Henry Burris leading an eight-win Ottawa team to a stunning Grey Cup win over 15-win Calgary team in Toronto in 2016, or the fact that they’ve managed to battle to a tie in both the 2016 and 2017 seasons.

Of course, this game was far from over. Rick Campbell said in the post-game that he was debating on how to play it after his team’s quick two-and-out. He opted against punting, took the safety, and shaved his team’s four-point advantage down to two.

Armchair coaches across the country collectively ripped the arms off of said chairs as Calgary made the REDBLACKS pay. A 22-yard kickoff return from Terry Williams; a 10-yard Nick Arbuckle pass to Reggie Begelton; a two-yard Arbuckle sneak; an eight-yard pass to Eric Rogers and three handoffs to Williams that got the ball comfortably to Ottawa’s 30-yard line. From there, Rene Paredes easily sent a 37-yarder through the uprights, getting Calgary a win that grazed Ottawa’s tonsils on the way out past the jaws of defeat.

It’s another addition to an ongoing book of weird fiction that these two teams are writing. The REDBLACKS opened their season with a win in Calgary, with Dominique Davis bursting into the end zone with 1:22 left – also carrying the burden of throwing four (FOUR!) interceptions – giving Ottawa its only lead of the game in an unlikely win.

Campbell’s call helped seal his team’s fate on Thursday night but there were 145 other plays between both teams before that one that all played a factor in that Ottawa loss. The REDBLACKS had four turnovers of their own. They had 221 yards of offence to Calgary’s 493. Calgary had the ball for 37:05. You couldn’t ask for more out of Ottawa’s defence, a group that played with a playoff-like intensity but wasn’t able to snuff out that one final drive, a painful end to a long, long night of work. 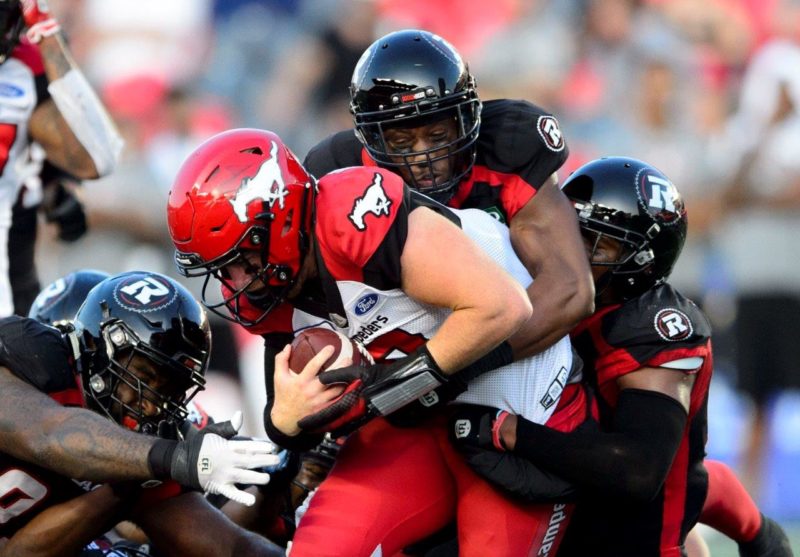 What gets lost in the aftermath of these moments is that mistakes will be made at every level of a football team throughout a season. A quarterback will throw a game-changing pick-six. Another one will find his best receiver, who will beat the defence for a game-winning TD run. A coach will make a gutsy call and have it work, and another will try something that doesn’t. Campbell was that guy on Thursday. He won’t be the last coach to be wrong this year.

Despite the loss and the team’s first four-game losing streak, the REDBLACKS situation did improve over the weekend through another team’s misfortune. Jeremiah Masoli’s season-ending ACL injury takes the top team in the East down a peg or two while we see what Dane Evans can do as his replacement. Ottawa is 2-4, but the East still feels very much up for grabs at this point.

One good thing for both the Stamps and the REDBLACKS: They won’t have to face each other again this year – unless they meet as playoff opponents.