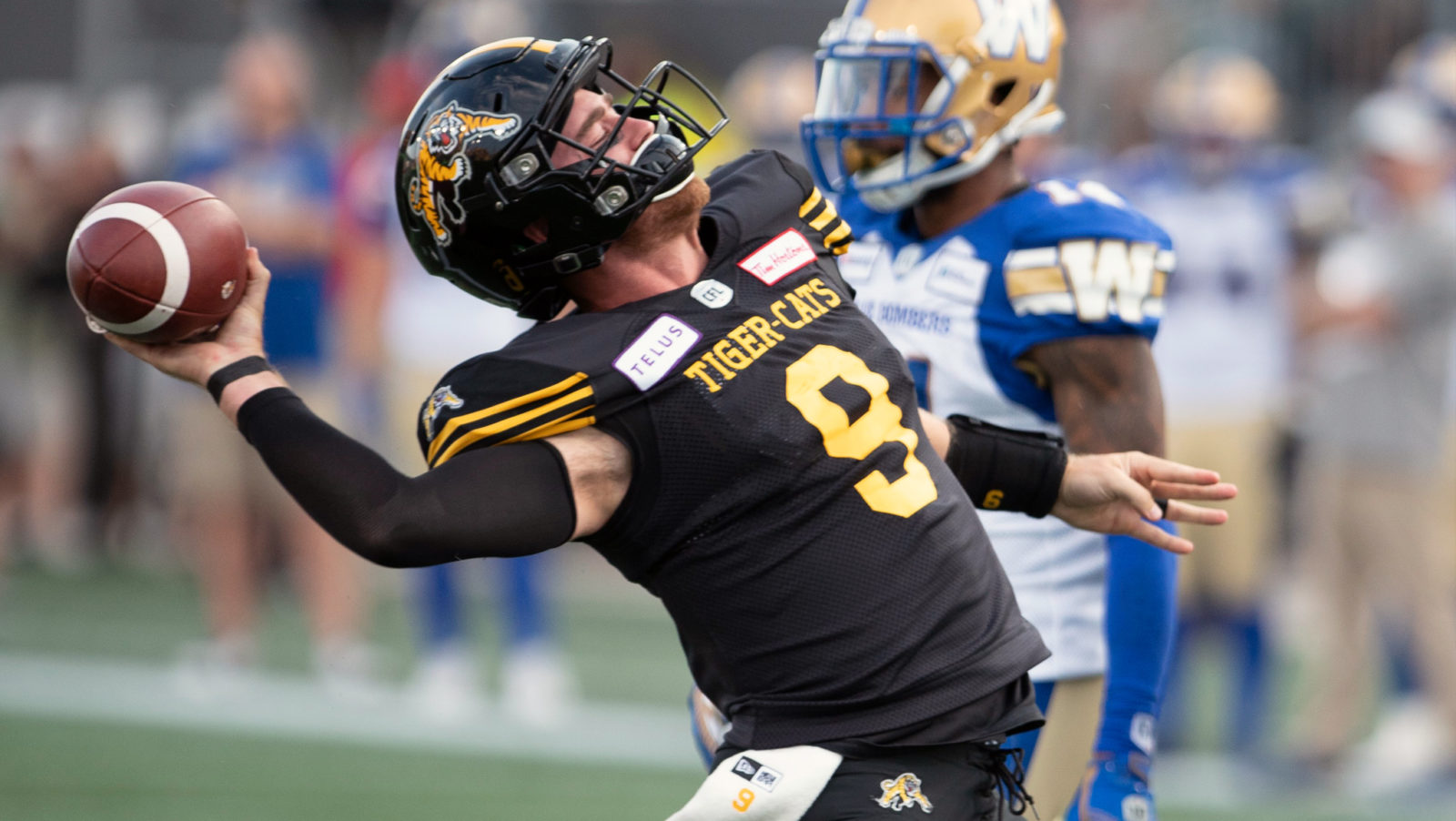 TORONTO — Dane Evans‘ time has arrived, though quicker than anyone could have expected.

Nonetheless, with the Ticats leading the East and Jeremiah Masoli sidelined for the remainder of the season, the team’s fate suddenly rests with a 25-year-old quarterback whose resume is relatively unknown across the three-down game.

At a time when Nick Arbuckle, Cody Fajardo and Vernon Adams Jr. have emerged as future starters in the CFL, can Evans become the next backup to thrive in the face of adversity?

There’s plenty of shuffling across the CFL.ca Quarterback Index this week. While Trevor Harris reclaims his top spot, Mike Reilly has finally been bumped from the top-three after a tough outing against Saskatchewan.

CFL.ca ranks the pivots through seven weeks of the season:

The Eskimos didn’t need much from Trevor Harris in a 26-0 win over the Argos. Despite his top ranking, Harris is in a bit of a slump, failing to throw a touchdown in three of his last four games — a span over which he’s averaged 7.3 yards per attempt. The Battle of Alberta awaits.

The Ticats had their way against Matt Nichols in Week 7, forcing three interceptions while holding the Bombers’ pivot to just 5.4 yards per attempt. Nichols, who maintains a sparkling 13:4 touchdown to interception ratio, will try to bounce back in a matchup against the Argos.

Vernon Adams finds himself in the top three for the first time, despite not even playing in Week 7. The Alouettes’ quarterback has averaged 9.3 yards per attempt and thrown just two interceptions this season, but nothing’s more important than his 3-1 record as a starter in 2019.

When you thought things couldn’t get worse, Mike Reilly was sacked four times and held to 66 yards on 8-of-19 passing vs. Saskatchewan. There are issues far beyond the quarterback in BC, but Reilly simply isn’t producing, averaging 7.3 yards per attempt in 2019.

Cody Fajardo continues to get the job done for the Riders, completing 21 of 26 attempts while avoiding any turnovers in a 45-18 win over BC. A tougher test awaits against the stingy Ticats, but so far Fajardo is tightening his grip on the Riders’ starting job.

It may not have been pretty, but Nick Arbuckle did what he needed to in a last-second win over the REDBLACKS on Thursday. The Stamps’ up-and-comer threw for 370 yards on 30-of-37 passing, though he did fail to find the end zone for the second time in three contests.

The Ticats liked Dane Evans so much as a rookie that he was placed above Johnny Manziel on the depth chart. We’ll soon find out what the Ticats liked about him, as Evans becomes the starting quarterback in place of the injured Jeremiah Masoli.

After a rocky start that saw him throw two interceptions, Jonathon Jennings wound up completing 83 per cent of his passes while almost leading Ottawa to an upset victory over Calgary. The 27-year-old likely returns to his backup role this week.

McLeod Bethel-Thompson was pulled at halftime, then again in the fourth quarter as the Argos were shut out by the Eskimos. Edmonton’s defence isn’t fun to play against, but Bethel-Thompson’s career 16:19 TD to INT ratio — including nine picks this year — won’t get him far.

The Argos finally got a look at Dakota Prukop in a regular season game after replacing McLeod Bethel-Thompson. The former Oregon Ducks pivot is considered an intriguing prospect around the CFL, and there may be no better time than now to give him a real opportunity.