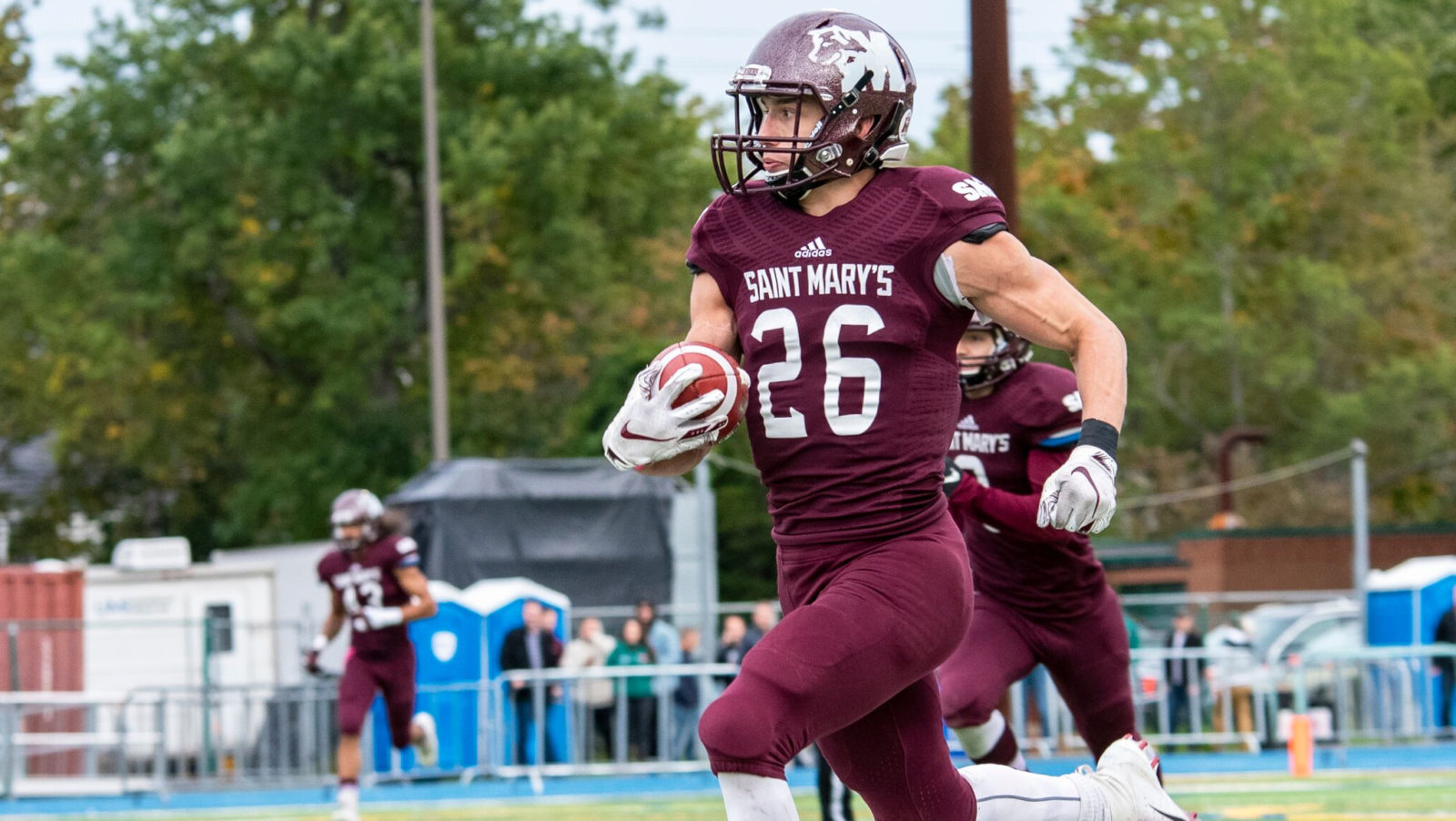 Jordan Angove has dealt with his share of decisions – and some have been tougher to deal with than others.

There was a time when he was sitting in darkness, not sure about his future.

Better yet, football – a sport Angove chose over hockey – was something he not only desperately wanted to learn, but, when given an opportunity, was determined to be a dominant player, a game-changer and still strive for greatness.

High expectations for the gridiron may have started back in his teen years, focusing on football over numerous distractions. He was unwavering and insistent, even though he knew it would be harder to get noticed while growing up in a hockey town at the junction of the Fraser and Nechako Rivers of Northern British Columbia.

Angove figured his talent, purpose and confidence would win out – and he was right.

Not only a prospect with a winning personality, Angove is now a Canadian university all-star defensive back at Saint Mary’s University in Halifax. Bigger plans, like playing professional football, he hopes, may be around the corner. 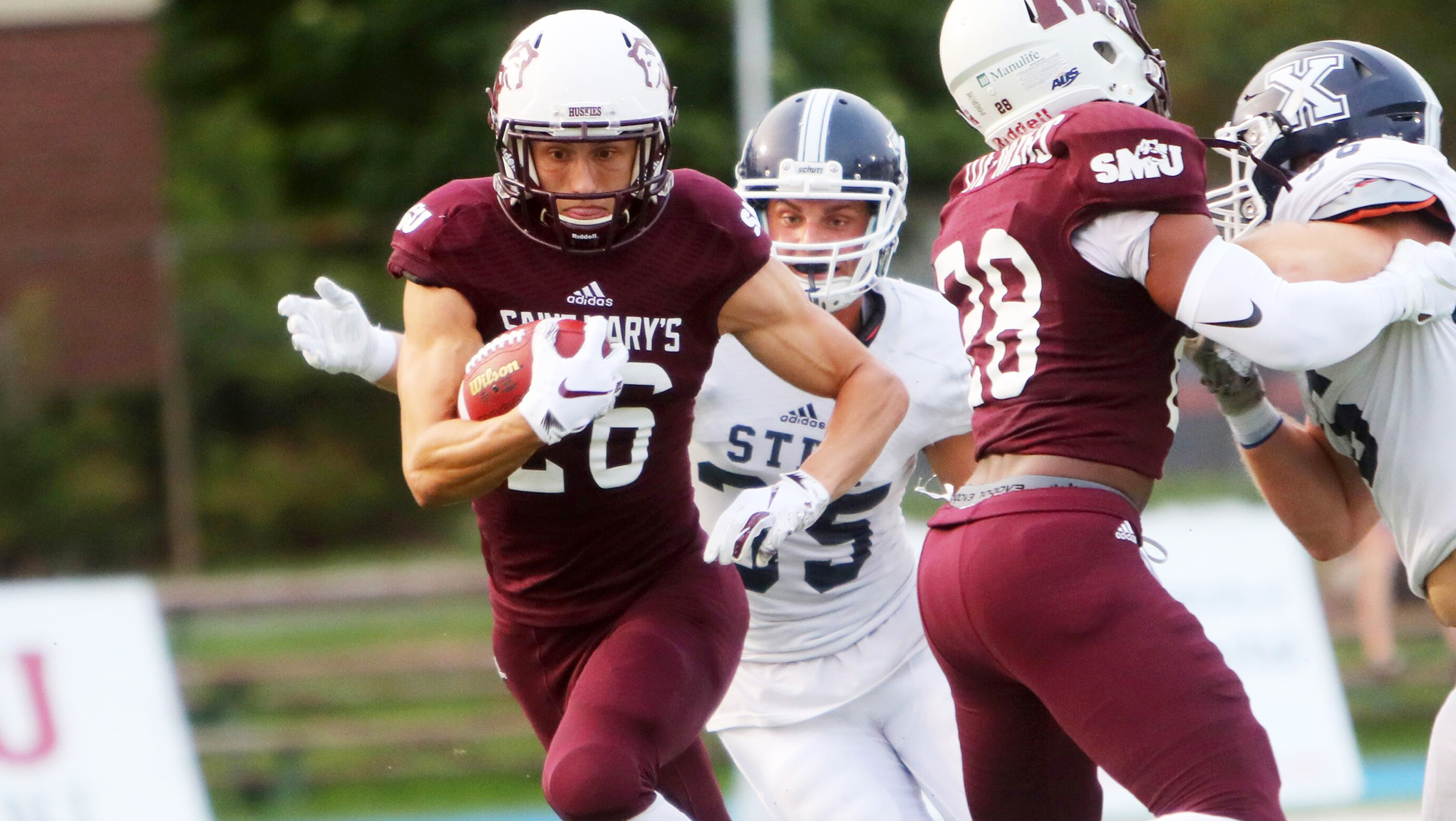 “There are times that I think about (the CFL) and if I am fortunate that a team picks me, I’ll certainly go forward and try my best,” said Angove, who is pursuing a Bachelor of Commerce Degree in accounting and finance, and looking at a career as a chartered accountant.

Going from one end of the country, to the other, can be a tough grind for many youngsters, but what Angove has done to get where he is these days is nothing short of phenomenal.

There were a few setbacks, some more severe than others and one, almost catastrophic.

It was in grade 12 that Angove ran through a glass window during basketball sprints in high school, severed a bicep, nicked an artery and required 61 stitches to close gashes in his elbow, forearm and shoulder back in 2013.

“It was scary – just a bad scene and I remember paramedics, while on my way to hospital, not looking good. I thought I was going to die.”

Courageous and valiant, focused on unpredictable power and energy, each time, Angove forged ahead. Depressing times were gone, replaced by glory and admiration.

In Prince George, Angove went to Kelly Road Secondary School, and his early days were split between playing hockey and soccer. In Grade 11, he wanted to try something different – and the initiation to football became more of a love story.

“Back then, I was never the Athlete of the Year, or on a championship team and you couldn’t find me on a highlight tape,” he recalled, starting as a running back, then a pass receiver. “I remember my first play in football – and got scored on. But I answered right back, and scored a touchdown, we went on to win the game and that changed everything for me.”

After graduating from high school, then a 17-year old, Angove took a year off – and it helped with his rehabilitation. It wasn’t long, and Angove, audacious and unflinching, had his bags packed and went off to Kamloops, a six hour trip from home.

For Angove, hooked on football, the plan was to play for the Kamloops Broncos of the Canadian Junior Football League – and what a year it was for him. He led the CJFL in interceptions (8), set a team record for kick-off return yards (243) and was named league all Canadian as a defensive back and return specialist.

Coaching at the University of British Columbia was James Colzie III, who was a player on the NCAA National championship Florida State Seminoles and, as a coach, won a Vanier Cup as a defensive coordinator with UBC in 2015.

Colzie III was head coach of the Saint Mary’s Huskies, and he knew all about Angove.

“(Angove) was an all-Canadian at Kamloops and a big time player,” said Colzie III, who has coached 18 players currently in the CFL. “We built up a relationship and I knew he was the kind of player who would fit right in at Saint Mary’s. He’s physically gifted, one of the best players that I have coached and certainly, in my opinion, CFL material.”

At 6-foot-1 and 190 pounds, Angove led Canadian university football teams last season with six interceptions and was chosen an Atlantic University Sport all-Conference all-star, leaving people to marvel at his skills. Angove also played in the East-West Bowl, a showcase for pro recruiting coaches, and yet was over-looked as an all-Canadian.