Morris: Arceneaux leading by example in first season with Riders 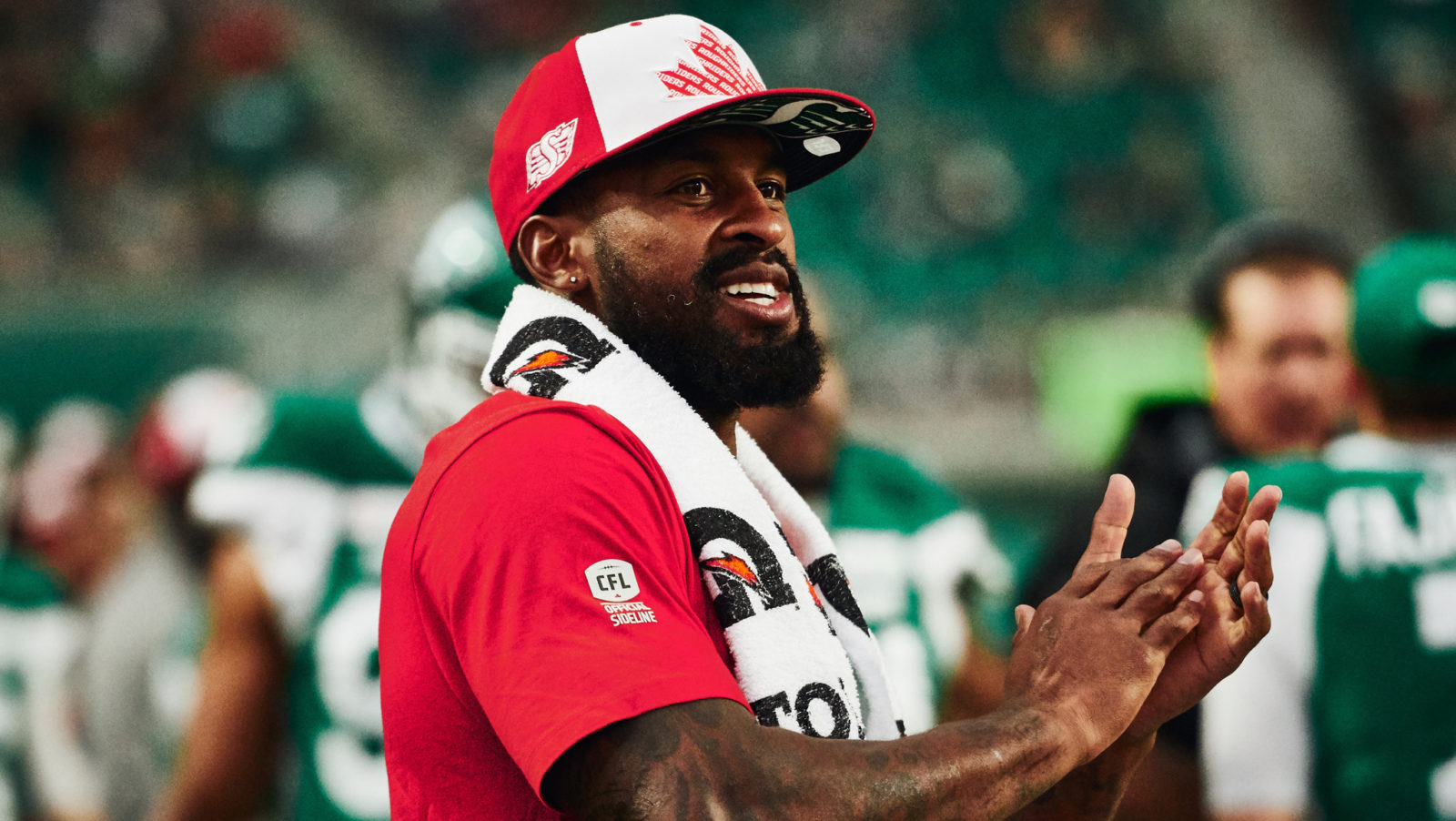 Morris: Arceneaux leading by example in first season with Riders

For most of eight seasons, the Manny Show played to rave reviews.

As a BC Lion, Emmanuel Arceneaux established himself as one of the premier receivers in the CFL. He used his size, strength and sure hands to make the catch that needed to be made, gain the yards that had to be gained.

There were three consecutive 1,000-yard seasons and five of over 800 yards. He was a CFL All-star twice.

But like any long-running act, the Manny Show began to show signs of wear. Arceneaux played only nine games last year before suffering an ACL injury that ended his season. When Lions general manager Ed Hervey began remodelling the team last winter, the 31-year-old Arceneaux was blown out the door in the winds of change.

In February Arceneaux signed as a free agent with Saskatchewan and introduced an updated version of the Manny Show to the Roughriders. He may not be the prime receiver in the Rider offensive scheme, but Arceneaux has played an important role in mentoring young receivers like Shaq Evans, Kyran Moore, and Mitchell Picton.

“Just being their voice and leading by example,” Arceneaux said in explaining his role. “The guys are talented, they are pros. It’s just showing them what it takes to be a pro, and that’s consistency. That’s what I preach to them, be consistent. You want to be the man; you’ve got to be consistent.

“Consistency can buy you a lot of years. It starts in the meeting room, the practice field and on game day.”

RELATED
» The Weekly Say: Have the Riders reached contender status?
» Dickenson: Ticats will ‘tell us how tough we are’
» Powell, Rolle, Lankford named Week 7 top performers

Arceneaux is preaching to a converted choir. Both Evans and Moore are among the CFL’s top 10 receivers and credit Arceneaux’s influence.

“He taught me how to be a pro, the way he carries himself, his mindset,” said Moore, who had a 22-yard touchdown catch in Saskatchewan’s 45-18 pounding of the Lions Saturday. “On negative situations, he just finds a way to make it a positive.

“Manny, he will be joking around but when it’s time to be serious, he makes sure everybody looks on. His voice gets everybody’s attention. When Manny talks, everybody listens.”

The second-year receiver, who played college football at Austin Peay, has 25 catches for 405 yards and three touchdowns.

Evans, who has 22 catches for 427 yards and two touchdowns, said Arceneaux leads by example.

“He just keeps you engaged,” said the second-year Rider from UCLA who leads the league with an average of 19.4 yards a catch. “He’s a guy that brings the energy every day. Just having that veteran presence, and just bringing that mindset, trickles down to the whole receiving corps.”

Arceneaux’s knee surgery was expected to sideline him for a year, but he returned in time for training camp with the Riders.

“I knew I was going to come back,” said the six-foot-two, 210-pound native of Alexandra, La., who also underwent ACL surgery after the 2013 season. “Mentally, that has never been an issue with me. I’ve always been mentally tough.

“It was just physically. Waiting on the body to be healthy enough to do what you want it to do. Everything is a process when you are dealing with operations on the knee. You can’t rush it. You have to wait on time.” 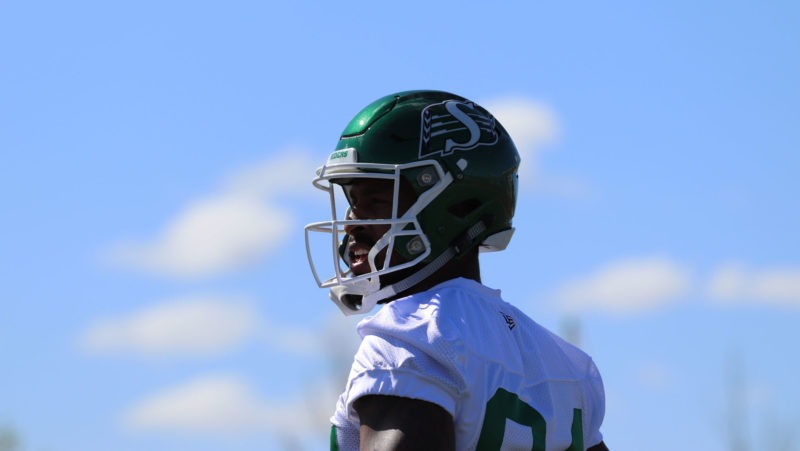 For some teams, signing a player on the north side of 30 who has undergone two knee operations could have risen a red flag.

“We wouldn’t have pursued Manny if we didn’t feel he still had a lot of good football left in him,” said Rider head coach Craig Dickenson. “We did our due diligence this offseason.

“We know what kind of worker he is. He’s a working machine. He’s strong. He’s committed to football. He’s a true pro.”

Arceneaux has dressed for the last two Rider games. He had a catch in each for a total of 11 yards.  Not the statistics he’s used too but Arceneaux is willing to be patient.

“It’s cool, it’s fine,” he said. “When it’s my time to light it up and get into the groove, it’s going to be my time. Right now, it’s all about getting victories and helping in every aspect and way I can.”

Dickenson couldn’t predict how much of an offensive role Arceneaux will play in the future.

“Our offence is built around what the defence gives you,” he said. “When we have a shot we’ll take it.

“I’m not sure if it means Manny is going to get more catches or targets. But Manny is doing what he needs to do to help the team.”

Arceneaux has managed to extend his streak to 103 consecutive games with a catch.

“It means a lot but I couldn’t have done it without my teammates,” he said. “To have 103 games with a catch is kind of big but it’s all about getting a victory.”

The back-to-back wins over BC improve the Riders to 3-3 while the Lions dropped to 1-6.

Arceneaux shrugged when asked about the struggles being faced by his old team.

“I could care less,” he said. “They’ve just got to figure some things out.” 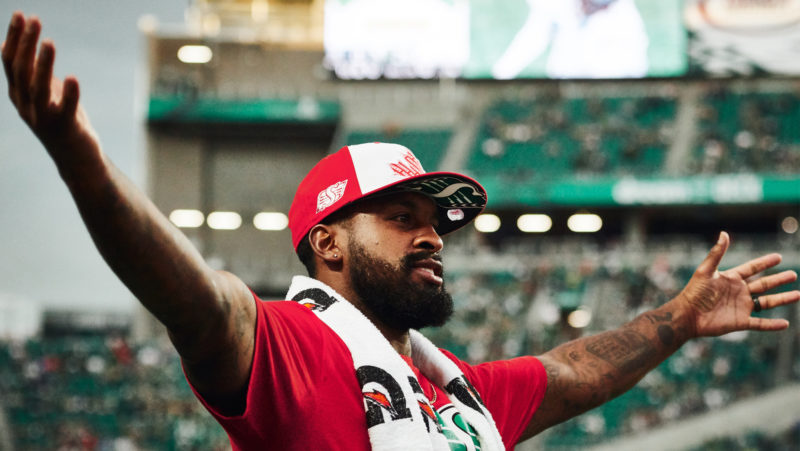 Arceneaux admits he would have liked to finish his career with the Lions.

“You hate to go,” he said. “Whether it was on the field or off the field, I built a brand. You want to wrap things up or play it out in that city.

“Unfortunately, it didn’t happen that way. That’s just part of it.”

Switching teams has resulted in Arceneaux leaving Vancouver, where the CFL is sometimes an afterthought, and arriving in Regina, where the Riders are always the focus of attention.

“It’s wild, it’s crazy,” he said. “You love it. They make you appreciate football and being there.

“You’re out in public and somebody is going to know who you are, and they are going to want to talk Rider football. You might as well appreciate it while you can. Someday nobody going to want your autograph or could care less about what you are doing.”