Dissecting a humbling Eastern swing for the Bombers 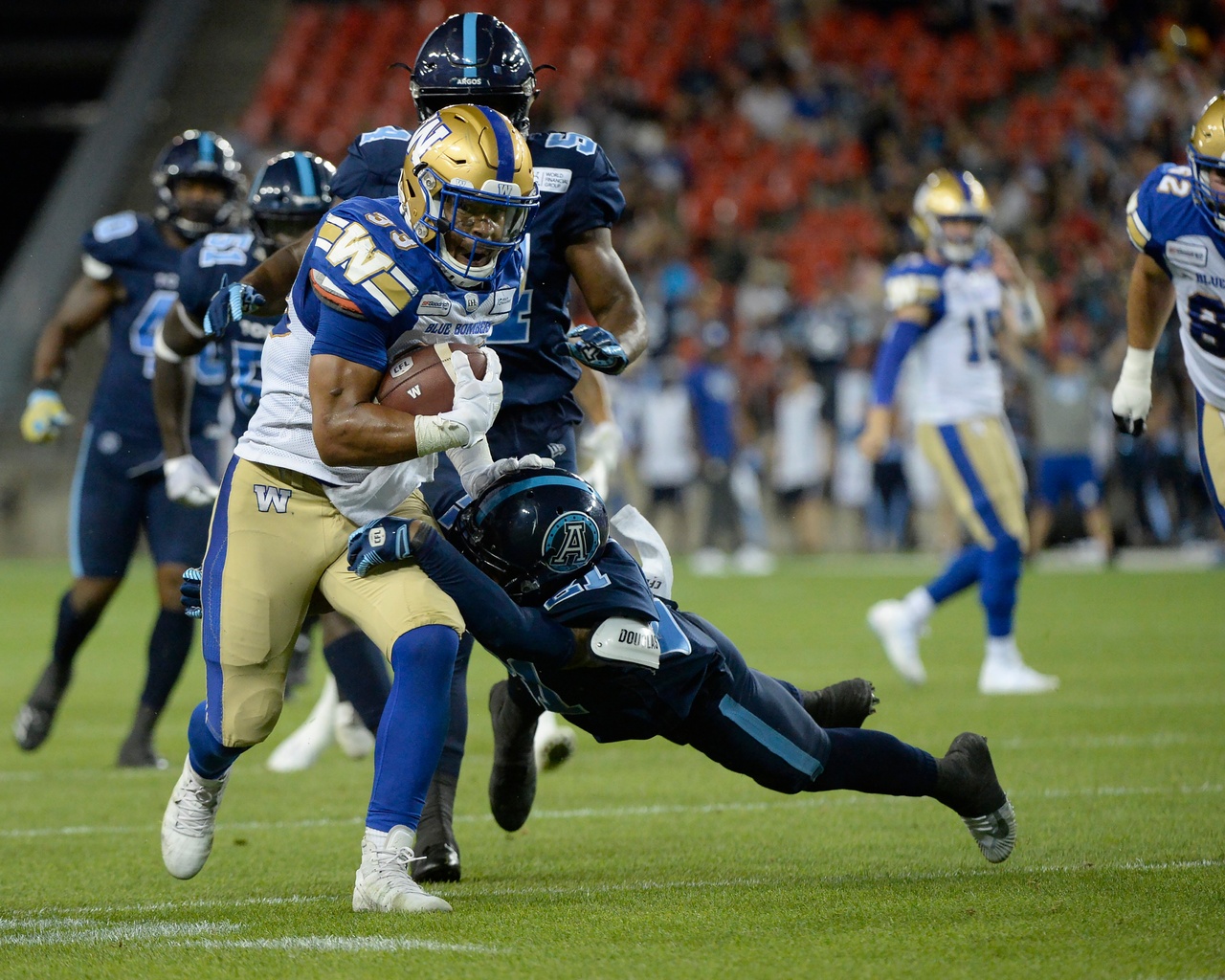 Dissecting a humbling Eastern swing for the Bombers

If the Winnipeg Blue Bombers’ just-completed Southern Ontario nightmare was to be framed as a one-line movie tease, it would go something like this:

Yes, it wasn’t too long ago – July 25th, to be exact – when everything seemed dream-like and rosy in Bomberland. They were 5-0 for the third-best start in franchise history, were backed by a stingy defence that was augmented by an efficient and occasionally explosive offence.

They were atop everyone’s Canadian Football League power rankings, seen as a Grey Cup favourite, and after the two-game set against Hamilton and Toronto, were to make a triumphant return home to prepare for visits from Calgary and B.C.

But now,  with losses in Hamilton and then in Toronto against a previously-winless Argonauts squad that had gone 1-15 in their last 16 dating back to 2018, the Bombers have clearly had a number of warts exposed.

Those flaws were evident in all three phases of Thursday’s 28-27 loss to the Argos, a game in which the Bombers built a 20-0 second quarter lead and then mistakenly shifted into cruise control while Toronto rocketed by them.

The Bombers were out-scored 28-7 over the last 32 minutes, beginning with surrendering 10 points near the end of the first half. Even after stagnating in the second half, they spit up a 27-20 fourth-quarter lead by allowing the Argos to rally for victory with a nine-play, 72-yard drive in the final 90 seconds that was capped by S.J. Green’s game-winning TD with 10 seconds remaining.

Even as the game unravelled, they had any number of opportunities to simply step up and escape with a win – as ugly as it may have been.

“We didn’t play very good football and Toronto did and they beat us. As I said to our guys, ‘They earned it and we didn’t.’ We’ll stick to the process of watching the film, correcting our mistakes and we just need the guys to start taking those corrections and putting them on the field on a weekly basis.”

THERE WERE SOME GRUESOME NUMBERS… on the final stats sheet for the Bombers, with nothing more telling than the totals that best represented the defence’s struggles to get the Argos off the field and the attack’s inability to stay on it.

Winnipeg managed just 93 yards of net offence in the second half, while the Argos cranked out 227. And in the final 30 minutes, the Argos held the ball for 18:30 to Winnipeg’s 11 minutes and 30 seconds.

“It didn’t even (start) in the second half,” O’Shea said. “It was late in the first… they ended up getting 10 points there and then another three (on the first drive of the second). It goes unanswered. It goes without a stop.

“We’ve got to be better than that and we certainly can’t ride momentum or let that defeat us. We can’t let another team’s momentum affect us. We have to play at our level, make the easy tackles, catch the ball, block… the fundamental stuff, really.”

LET’S EXAMINE THIS IN A LITTLE MORE DETAIL… After building a 20-0 lead, the Bombers ran 30 offensive plays totalling just 102 yards while the Argos were on the field for 54 plays covering 355 yards.

“We needed to take more advantage and really twist the knife while we were up and not let them build that confidence and get back in the game,” said Bombers defensive end Craig Roh.

“Now it’s about drilling back down to the fundamentals. Any time a team is attacking you, you have missed assignments and so you need to drill back down to what made you a good defence in the first place.

“I know we’re still a very good team, we just didn’t show it. Toronto came out and… look, a team that hasn’t won yet can be a dangerous team. They’ve got nothing to lose and so they start throwing everything at you. And they threw a lot at us today. We just didn’t respond the way we needed to.” 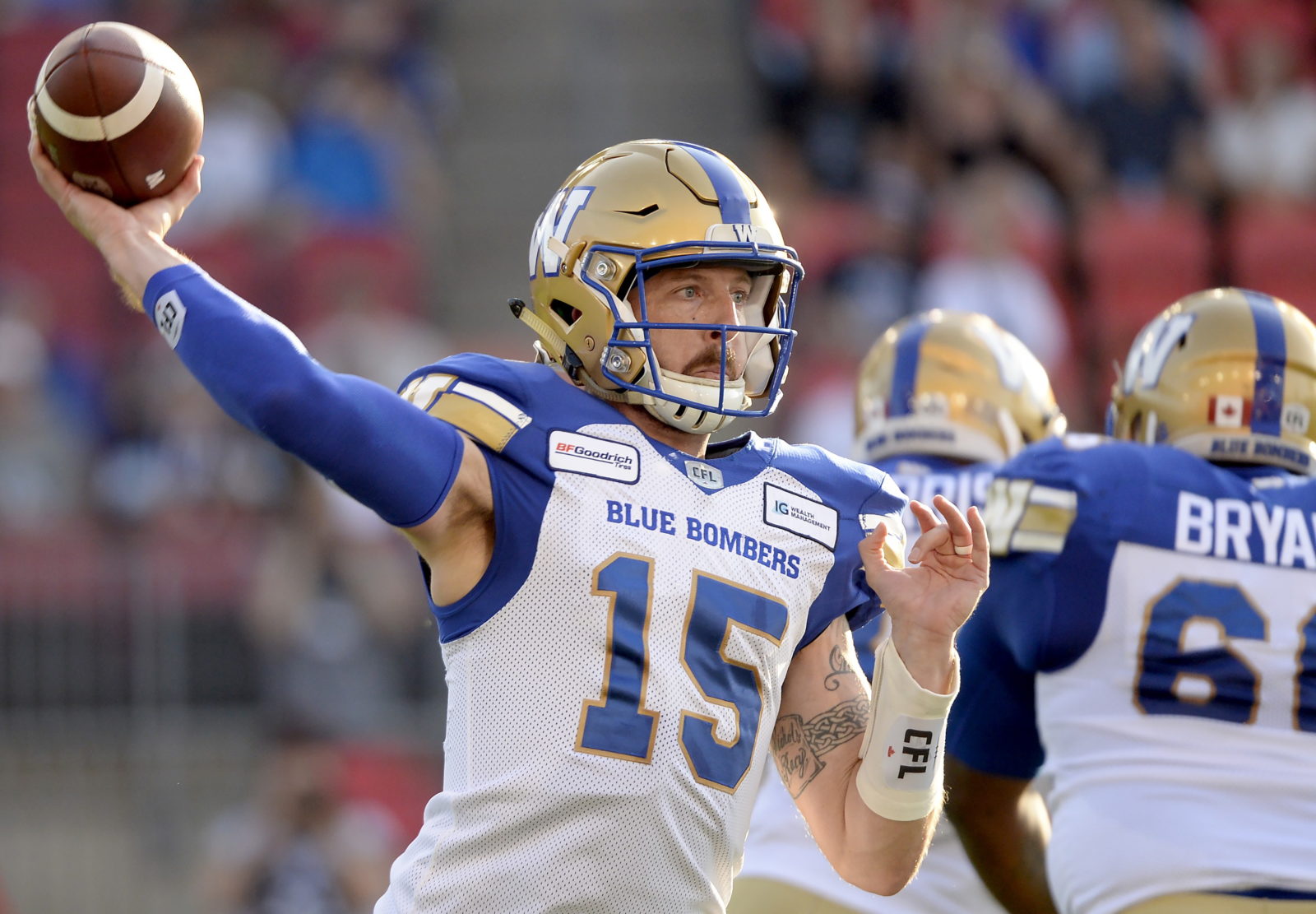 IN THE PROCESS, ARGOS QB McLEOD BETHEL-THOMPSON… looked Flutie-esque as the home side climbed out of their deep hole.

Get this: After falling behind 20-zip, Bethel-Thompson went 28-of-35 for 263 yards with three touchdowns while also rushing for 43 yards on three carries in the fourth quarter. Over that same stretch, Matt Nichols was 9-of-17 for 45 yards.

“We need to work harder and come out in the next few and be better,” said Nichols. “It’s pro football. It’s minor details and so for us I’m going to do everything I can to work even harder and get guys around me working hard to make sure we get back on track.”

So, what did happen to the Bombers after building such a big lead early?

“I’m not sure,” said Andrew Harris. “We had a couple too many two-and-outs, kind of shot ourselves in the foot a little bit… the momentum shifted and they had a couple big returns and their offence started going a little bit and that’s the game.

“(The Argos have) got nothing to lose. They’re trying to prove something. They’re playing for their jobs, they’re playing for a lot of things. It’s professional football… you’ve got to play like that every game. I’m not saying we’re not playing that way, but they wanted it more than us obviously and they got it and they took the game from us.”

“I don’t know if we let off the pedal or what it was. I’m at a loss right now about that,” added centre Michael Couture. “We’ve got to be able to stay on the field at the end of the game, which we weren’t able to do. I said the same thing last week. It’s something we’re going to have to address and fix and move on.

“Something like this… you feel sorry for yourself, you watch the film and it’s a 24-36 hour process. But we move on. We’ve got Calgary next week. We’ll look at this, take what we need and then flush it. We have to.”

THE BOMBERS GOT ANOTHER STELLAR EFFORT FROM HARRIS… who carried 15 times for 152 yards and his first two rushing touchdowns of the season, while also leading the club with six catches for 45 yards.

Harris was lamenting a second-quarter fumble in the red zone afterward, but his game was otherwise flawless. Harris now has 646 yards rushing on 95 carries – a sparkling 6.8-yards per carry average – and 37 receptions for 278 yards.

“Andrew’s good every night,” said O’Shea. “He took those check-downs, he ran hard, he broke some big run plays, he had a helluva touchdown at the beginning of the game where he broke through and kept that distance and out-ran guys. I’ve said this numerous times: we’ll hook the wagon to Andrew any chance we get.”

Still, related to that – the Bombers’ inability to stay on the field in the second half was evidenced by Harris’ touches: he had five rushes in the second half totalling 41 yards and two catches for 14 yards – four of those coming in the Bombers’ lone second-half scoring drive. In addition, Harris had just one touch – a three-yard carry – in the final 9:26 of the game.

AN INJURY TO JACKSON JEFFCOAT IN THE FIRST HALF… (don’t expect an update until later next week), meant that rookie defensive end Jonathan Kongbo took a lot of snaps on defence, as part of a rotation of defensive ends.

Kongbo, the Bombers second first-round draft pick (5th overall, after Drew Desjarlais was selected fourth) was flagged twice, but did occasionally flash his athleticism in his pro debut.

“There’s always learning to be done,” said O’Shea of Kongbo. “Every young guy is going to learn about the difference between university football and pro football. Also, no matter how hard you work it’s tough to be in game shape.

“During his six-game stint (on the injured list) he battled to make sure he was in as good shape as he could possibly be… it will just take him a little bit of time to get used to the game shape.”

AND, FINALLY… this will be a massive week for the Bombers coming up as they prep for Thursday’s home date with the Stampeders – the first of a five-game stretch against West Division opponents that will take them through the Banjo Bowl and their second of three bye weeks.

There are no magic pills here, but the Bombers do have to rediscover that formula that had them 5-0 before the Ontario trip.

“That part never changes: you have to go back to your process and trust that,” explained Adam Bighill. “You know you have to be real with yourself, every man has to be real with himself, and then make sure you look at effort and the things we do as prep during the week.