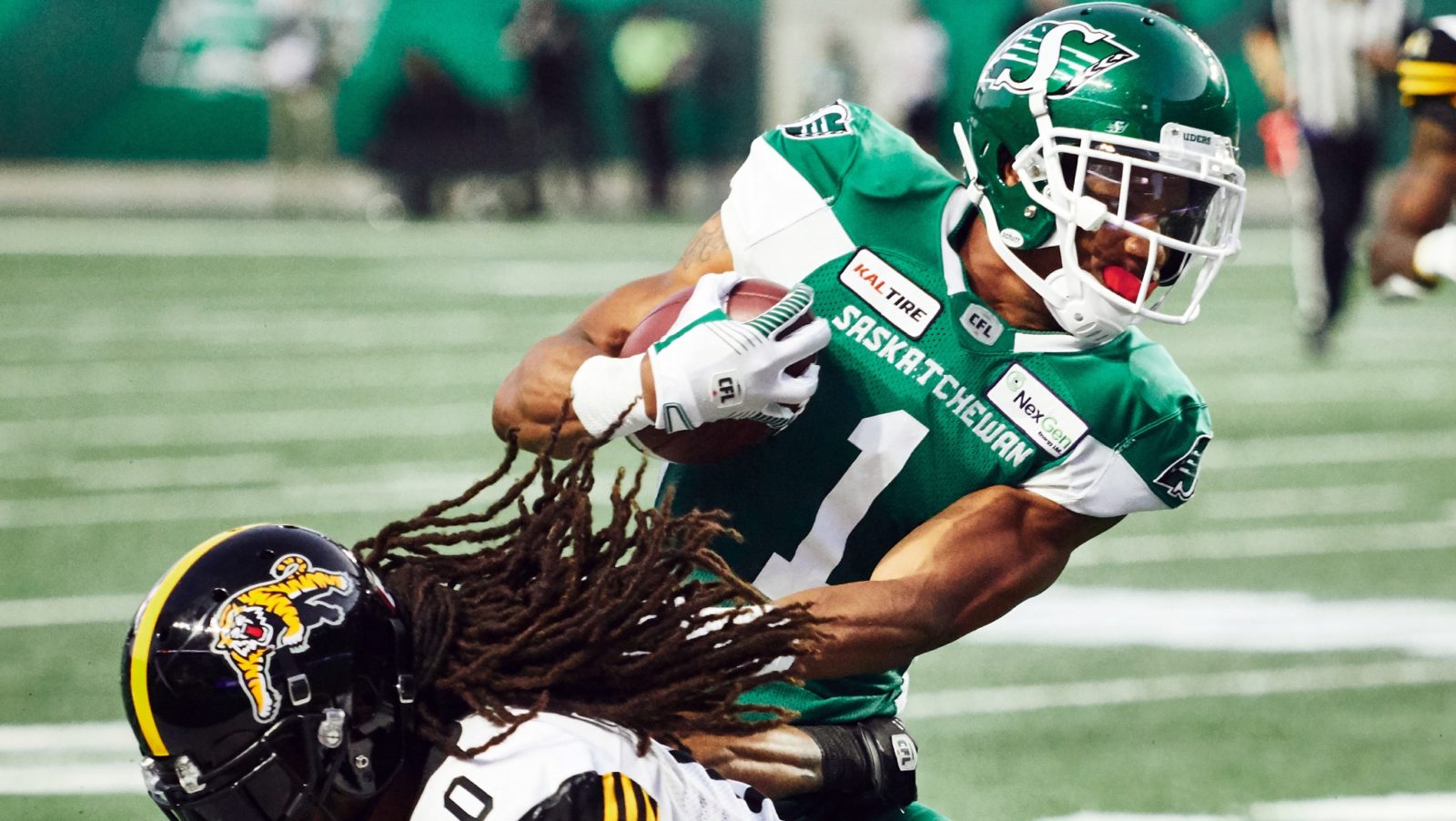 Shaq Evans broke the century mark in receiving yards in just one half of play Thursday night against the Hamilton Tiger-Cats. (Arthur Ward, CFL.ca)

Injured starter Bo Levi Mitchell ($9,822) returned to practice this week for the Stamps but will not play in Week 9. With a long week between games, Aug. 17 becomes the projected return date for the reigning Most Outstanding Player.

With Mitchell sidelined, Nick Arbuckle ($5,797) will get one more start under his belt for the Stampeders. Calgary’s backup has won four of his five starts this season and will face another tough test against the 5-2 Bombers in a battle for first in the West.

Injured running back Ka’Deem Carey ($5,743) will miss another week for the Stamps. With Romar Morris ($3,773) back in the fold and Don Jackson also in the background, Carey may have to wait a while for his next opportunity anyway. The Stampeder backfield is getting crowded.

A week after returning from an injured Achilles, Romar Morris ($3,773) will get the start for the Stampeders at running back. Morris had just 14 yards on nine carries in a win over Edmonton, but also caught five passes and returned four punts. The Stamps don’t appear to be limiting his workload.

The Bombers will be without receiver Darvin Adams ($7,267) for a second straight week. Adams left the Bombers’ Week 7 loss in Hamilton with an injury and hasn’t played since.

Chris Matthews ($4,029) will start a second straight game for the Bombers. The veteran receiver caught a touchdown pass in last week’s loss to the Argos and should play an important role in a critical matchup with Calgary.

William Stanback ($9,014) has been ruled out of the Alouettes’ Friday night matchup with Saskatchewan. Stanback was injured late in an overtime loss to Ottawa and will be replaced by veteran Jeremiah Johnson ($6,079).

Vernon Adams Jr. ($8,002) will not play for the Montreal Alouettes this week. The emerging star suffered an injury to the head/neck area vs. Ottawa and will be replaced by Antonio Pipkin ($6,663).

The injury to Vernon Adams opens the door for Antonio Pipkin ($6,663) to make his second start of the season. Pipkin has struggled this season, completing just 44 per cent of his 34 attempts, but he’s got a big arm and can run, making him an intriguing dice roll from a Fantasy perspective.

With Stanback sidelined, Jeremiah Johnson ($6,079) will get the nod at running back for the Alouettes when they take on the Riders. Johnson has 49 yards on eight carries in spot duty for the Als this season.

According to multiple reports, Shaq Evans ($7,348) is at risk of missing Friday’s contest vs. Montreal. The Riders’ breakout receiver injured his ankle in practice and hasn’t been able to suit up since. He is on the team’s depth chart at wideout, but could be a game time decision.

The Riders acquired Kenny Stafford ($4,936) from the Eskimos in a trade on Monday. Stafford could suit up for his first game as a Rider if Shaq Evans (ankle) isn’t able to go, but either Stafford or Evans could be scratched. Fantasy users are advised to consider other options.

The Eskimos will have Greg Ellingson ($8,459) back in the lineup this weekend to take on his former team, the Ottawa REDBLACKS. Ellingson cooled off after a torrid start and was forced to miss Edmonton’s Week 8 contest with an injury.

DaVaris Daniels ($7,837) is listed as a starter this week for the Eskimos. Daniels should see a steady dose of targets in an appealing matchup against Ottawa’s defence.

A week after making his season debut, Kevin Elliott ($4,130) is out of the lineup for the Eskimos this week. Even with Kenny Stafford traded, the return of Greg Ellingson and DaVaris Daniels put Elliott back on the sideline.

It appears Martese Jackson ($3,102) could be out long-term after suffering an injury in last week’s loss to Calgary. The Eskimos traded for Christion Jones ($2,944) on Monday, possibly as a direct result.

It appears Christion Jones ($2,944) will be a big factor in the Eskimos’ return game following the injury to Martese Jackson. Jones faced tough competition in Saskatchewan but is an exciting returner who could spark the team’s return game.

National receiver Tevaun Smith ($2,500) is in the lineup for the Eskimos as a starting receiver. The Eskimos will start three American linemen and adjust with two nationals getting the nod at receiver.

Despite earlier reports, RJ Harris ($6,812) will miss another week at receiver for the REDBLACKS. He’ll be replaced by rookie American Rafael Araujo-Lopes ($2,500) will take his place in the starting lineup vs. Edmonton.

The REDBLACKS won’t have the services of Caleb Holley ($3,219) at receiver this week, as he’s been left off the team’s roster for a matchup with the Eskimos. Holley has been an inconsistent contributor in 2019.

REDBLACKS head coach Rick Campbell says the team is looking for more ways to get Devonte Dedmon ($2,500) involved in the offence. That’s music to the ears of Fantasy players after watching the rookie electrify in the return game, taking two to the house in Week 8.

With RJ Harris still sidelined and Caleb Holley also out, Rafael Araujo-Lopes ($2,500) is getting the start for the REDBLACKS at receiver this week.

Ticats head coach Orlondo Steinauer said Brandon Banks ($14,000) has looked good in practice, indicating the speedy receiver/return man will return to the lineup in Week 9. Check back for the depth chart but it appears all systems are go for Speedy B.

According to multiple reports, Maleek Irons ($4,500) is not expected to suit up for the Ticats when they take on the BC Lions this week. Cameron Marshall ($5,810) is expected to make his debut in his place.