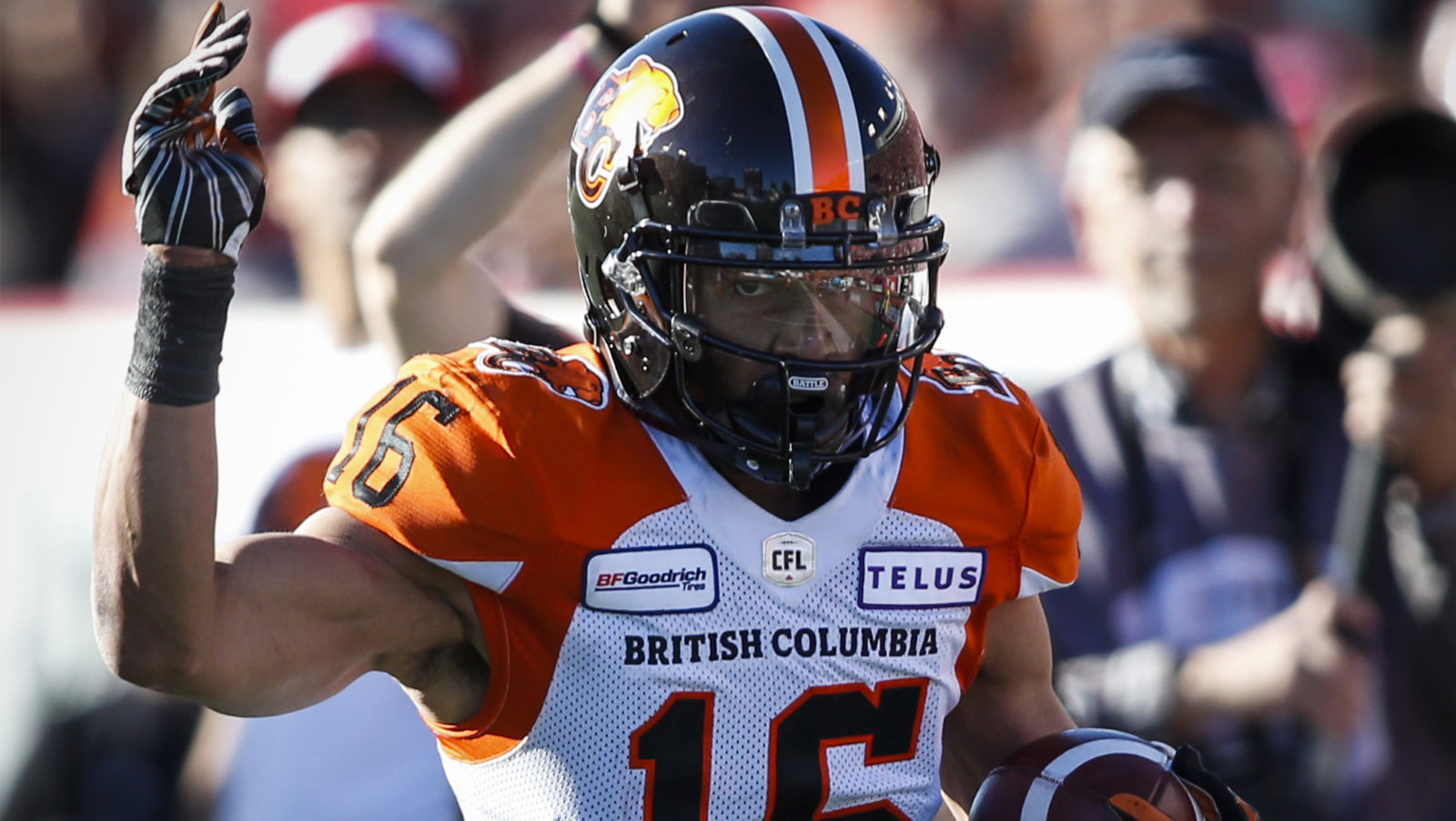 TORONTO — Heading into Week 9 action, there is but one team that has been unanimously picked to win.

In the final matchup of the week, the BC Lions do have one supporter, as Chris O’Leary is going with the 1-6 squad to grab the upset against the Hamilton Tiger-Cats.

The last pair of games have two-thirds of the writers picking the Montreal Alouettes and Winnipeg Blue Bombers.

Here are the CFL writer picks for Week 9.

RELATED
» Weekly Predictor: Ticats with the edge in Hamilton?
» Total CFL Pick ‘Em: Make your picks for Week 9!
» Be the GM in TSN CFL Fantasy presented by LeoVegas
» The DailyRoto 2019 Fantasy Guide 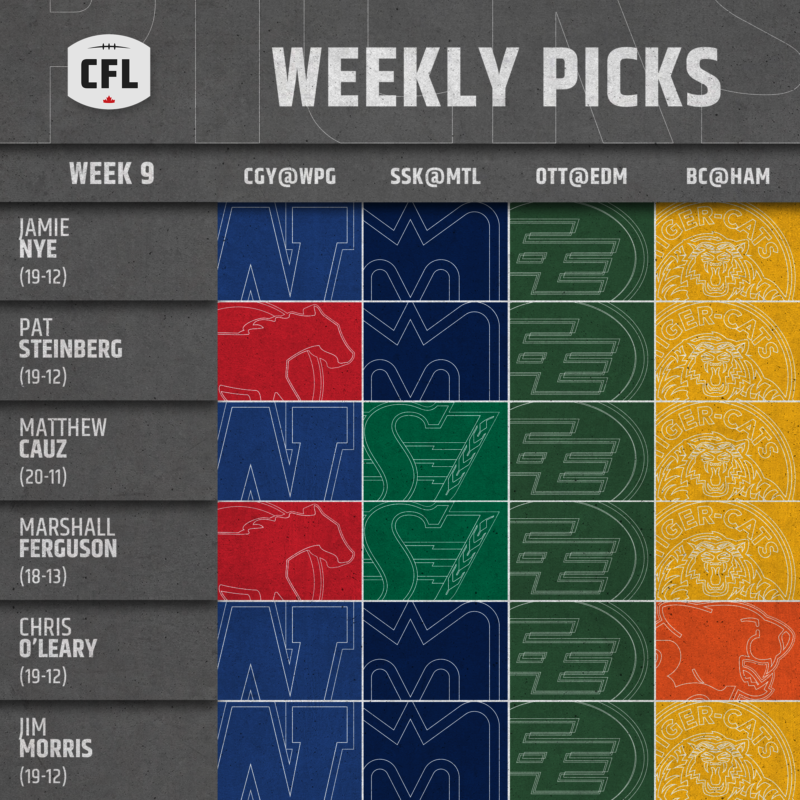 This is the heavyweight bout of Week 9.

Stampeders star quarterback Bo Levi Mitchell returned to practice on Tuesday, but despite there being a chance that he could have returned to game action this week, it’ll be Nick Arbuckle who will be trusted to lead the Stamps to victory in this game.

Against the Eskimos in Week 8, Arbuckle went 19 of 28 for 189 yards and a touchdown. Romar Morris and Terry Williams will team up to offer a dual-threat out of the backfield for Calgary. The former had 14 yards on nine carries in his first game back while the latter had 169 kick return yards – with 103 of those coming when he ran one back – and 72 punt return yards.

Winnipeg dropped its second straight game to Toronto as the Argos came back from a big deficit to win it in the final seconds. Andrew Harris had 152 yards on the ground and added another 45 on six catches. He had two rushing scores, with a 56-yard scamper highlighting his day. Matt Nichols had a down game, picking up just 169 yards through the air with one touchdown pass.

Calgary’s secondary is one of the best in the league, with Tre Roberson leading the ball-hawking unit. The Bombers will need to establish dominance through the air to avoid the defence crashing down on Harris. The home crowd at IG Field should give the Bombers some confidence in their bid to retake the top spot in the West.

Week 8 was a rough one for the Alouettes.

Vernon Adams Jr. didn’t return to the game after being sandwiched by a pair of REDBLACKS defenders and the team dropped the contest in overtime. Antonio Pipkin came in to relieve Adams, and he had 57 yards through the air on 8 of 17 passing. William Stanback continued his dominance on the ground, finishing with 88 yards on 12 carries.

Saskatchewan did manage to come out of their Week 8 matchup against Hamilton with the victory, but it came down to the final seconds. Cody Fajardo was handed the keys to the Riders, and he rewarded their faith by completing 25 of 31 passes for 313 yards. He had 56 yards on the ground, including the game-winning score on a five-yard run.

Shaq Evans had 160 yards on seven catches and William Powell rushed for 51 yards on 15 carries and a touchdown.

The Riders are looking for their fourth straight win. If they can get it done, they’ll be tied for second in the West with the winner of the Calgary-Winnipeg game.

The REDBLACKS are coming into this matchup off a big victory over the Als in Week 8. Edmonton, on the other hand, is trying to get back into the win column following a loss to the Stamps.

Ottawa managed to come out on top in overtime at Percival Molson Memorial Stadium. Dominique Davis returned to the lineup and managed to complete 58 percent of his passes for 164 yards and a touchdown and a pair of picks. John Crockett posted his fourth straight game with over 60 rushing yards with a 71-yard performance.

Edmonton was down big at one point in Week 8 against Calgary, but they managed to claw back, ultimately falling just short at the end. Trevor Harris tossed for 373 yards on 29 of 42 passing and two touchdowns. Ricky Collins was the main benefactor of the air assault by the Esks. He had 148 yards on six receptions and caught both touchdown passes.

The Esks are picked to win by every one of the CFL.ca writers, but as they did a week ago, the REDBLACKS could play spoiler on the road.

It’s been rough sledding for the BC Lions this season. They’ve lost their last three games, with two of those coming to Saskatchewan in a home-and-home series. They sit 1-6 on the campaign and now have to head into Tim Hortons Field and face the East-best Ticats.

Hamilton nearly won their first game without Jeremiah Masoli. They came up just short, as a last-second touchdown scamper by Riders quarterback Cody Fajardo sunk them. Dane Evans had a decent first outing under centre, going 19-for-29 for 129 yards with one touchdown and an interception.

Some changes are set to come to the Lions’ offensive line, and BC will need to protect Mike Reilly and get after Evans consistently in order to come out of The Hammer with a win.