Accuracy Grades: Who was on target in Week 9? 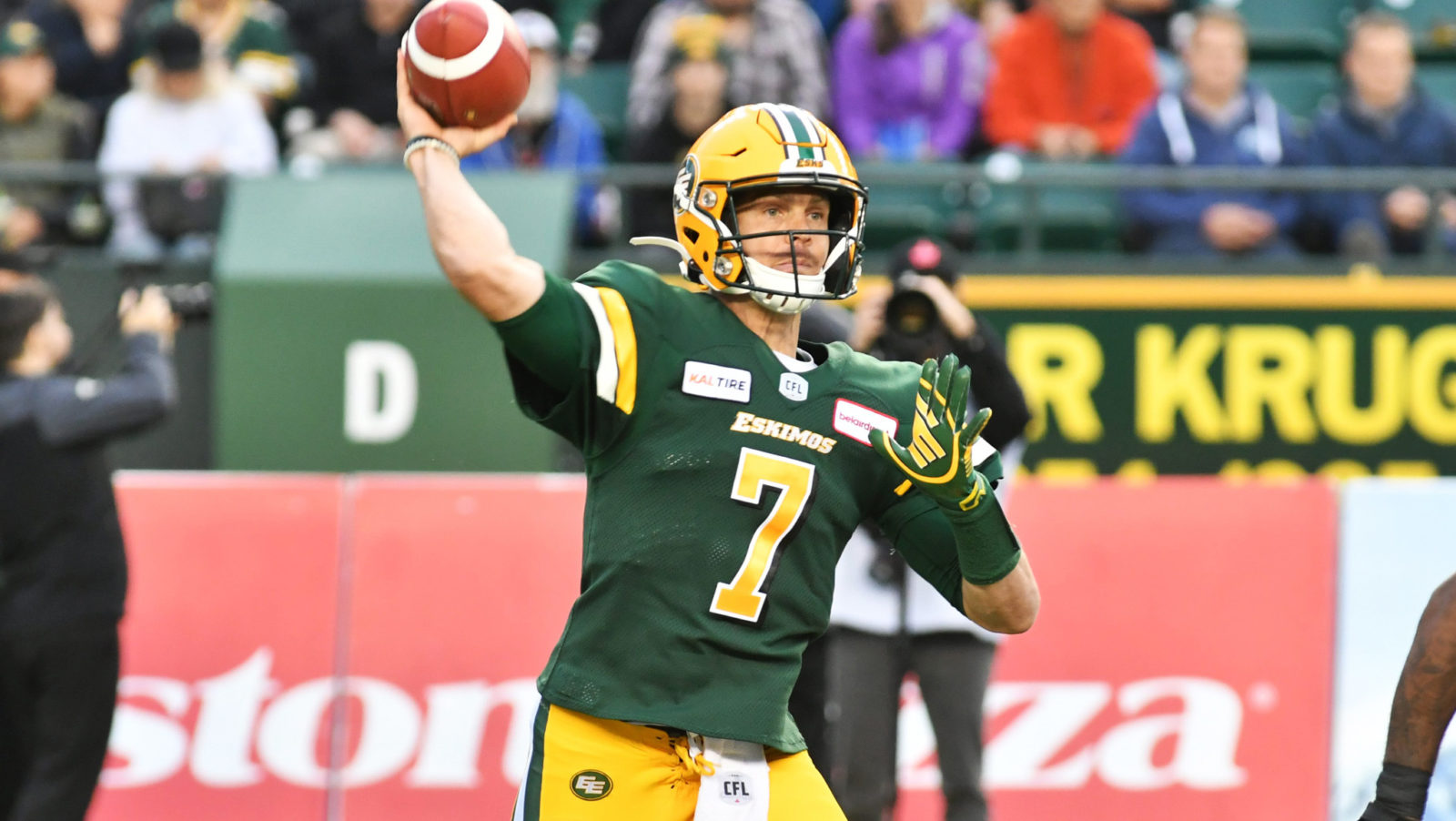 Accuracy Grades: Who was on target in Week 9?

Week 9 in the CFL has come and gone with a top end Western duel, a lightning shortened defensive display in Montreal, a classic revenge game in Edmonton and a vintage CFL finish in Hamilton.

Let’s take a look back at the week’s accuracy grades: 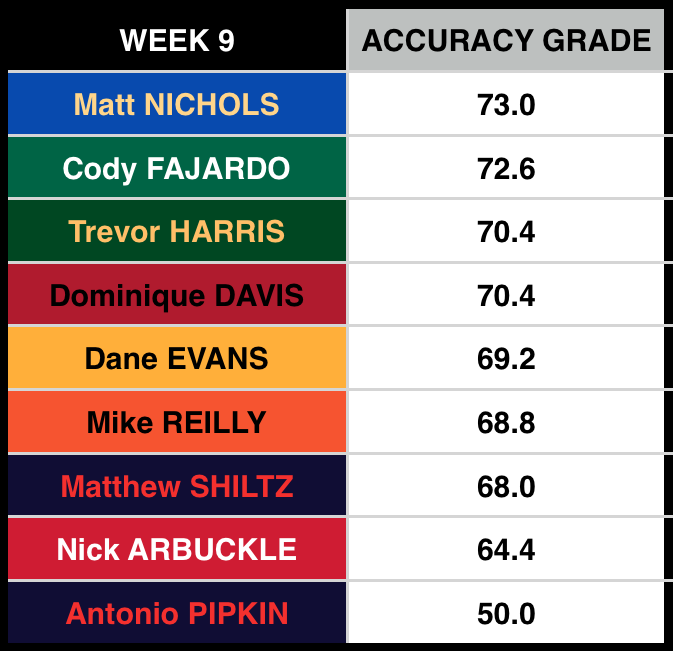 Montreal passers struggled in their weather-shortened matchup with the Riders as Antonio Pipkin brought up the back of the field and Matthew Shiltz wasn’t far ahead.

Surprisingly Calgary’s Nick Arbuckle, who leads all CFL passers in 2019 passing accuracy, split both Montreal arms with a season-low grade of 64.4.

Just ahead of Shiltz landed Mike Reilly, who battled admirably against Hamilton but eventually fell to Dane Evans. Evans posted his best grade of the season (69.2) since a Week 2 garbage time appearance versus the Argos (73.2).

Dominique Davis tied in accuracy grade with winning quarterback Trevor Harris (70.4) but Harris was selected for the Week 9 podium thanks to his higher 2019 season grade. 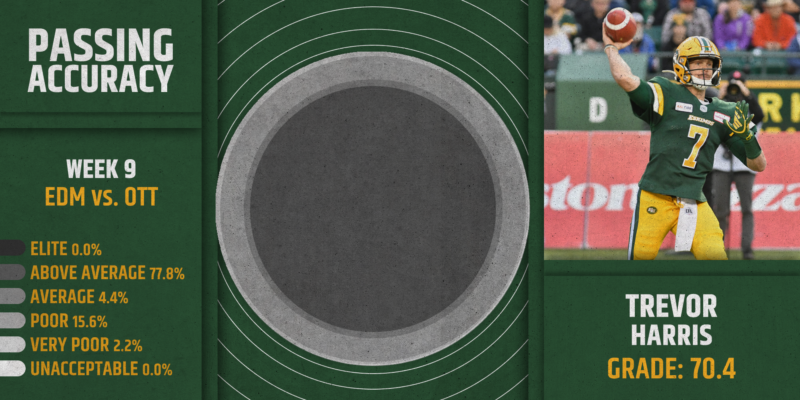 This is Harris’ highest accuracy grade game since Week 1 in a win over the Alouettes. In Week 9, Harris completed a whopping 82.5% of his passes for over 300 yards but had to rely on the Esks’ defence to finish the job after being unable to convert on a couple crucial third down plays and failing to throw a touchdown. 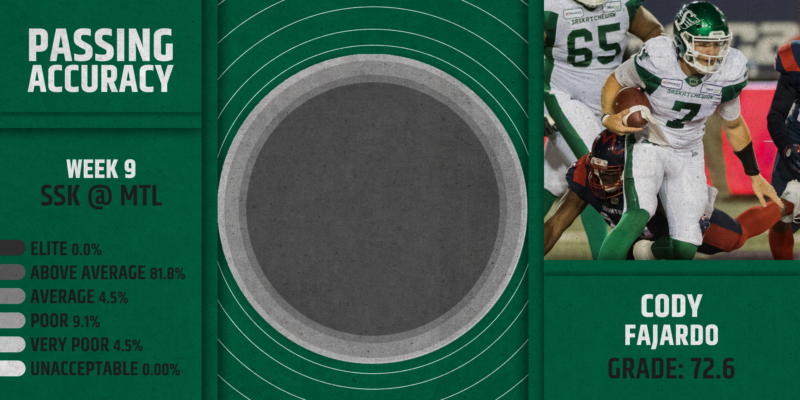 Another week in the CFL, another top three accuracy performance for Cody Fajardo.

I really don’t know how he’s been able to pull it off but I’m enjoying the ride, as all Riders fans should. You have a young, athletic quarterback who can throw on the move with accuracy or find the open receiver within the confines of the pocket. His game has been on a steady climb since the home loss to Calgary and while there will inevitably be setbacks, this starting point for Fajardo and the consistency of his game have both far exceeded my expectations. 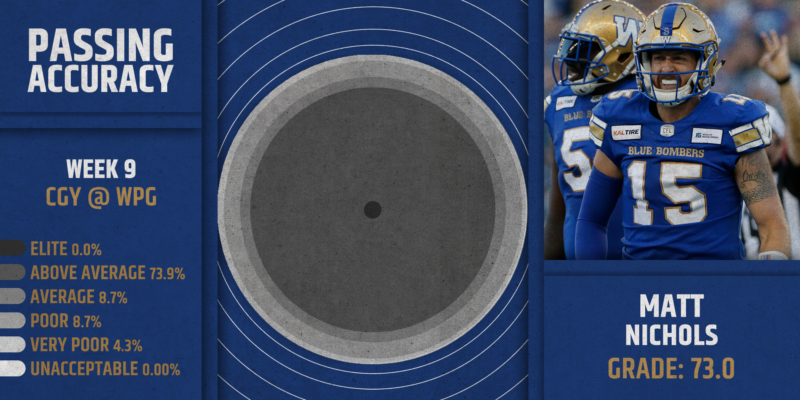 Did he get fourteen points from special teams? Yes.

Did his defence take seven Stamps points off the board at the end of the first half with an end zone interception? Yes.

Did he throw a ton of check downs to Andrew Harris and only amass 177 passing yards? Yes

Does Matt Nichols or anyone cheering for the Bombers care so long as they’re winning? No.

Nichols was 18/22 last Thursday night, playing some of the most efficient football of the CFL season so far and the style of play allowed him to post his best accuracy grade of 2019.

Now a look at the updated season standings: 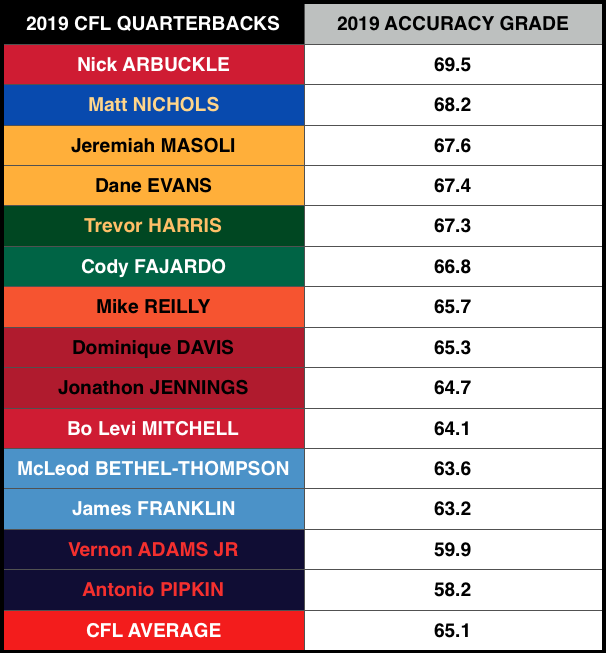 We did have some movement this week, much of it in the East with teammates passing each other in the 2019 target accuracy competition.

Dominique Davis used a fourth place finish in Edmonton to hop his 1B Jonathon Jennings. Vernon Adams Jr. hopped over Antonio Pipkin without taking a snap, thanks to an injury suffered the previous week against Ottawa and Pipkin’s poor Week 9 performance.

At the top, Bombers QB Matt Nichols leapfrogged both Hamilton quarterbacks Jeremiah Masoli and Dane Evans thanks to his elite efficiency outing. In combination with Nick Arbuckle’s out of character low weekly score, Nichols was able to close the gap on Arbuckle from 2.9 grade points back to a minuscule difference of 1.3 accuracy grade points.

With the BC Lions entering Nichols domain on Thursday night, and Arbuckle likely to take a seat in favour of Bo Levi Mitchell, Nichols could take the crown soon.

Oh, and in case you were wondering the answer is yes. Bo Levi is about to make a charge for the accuracy throne.